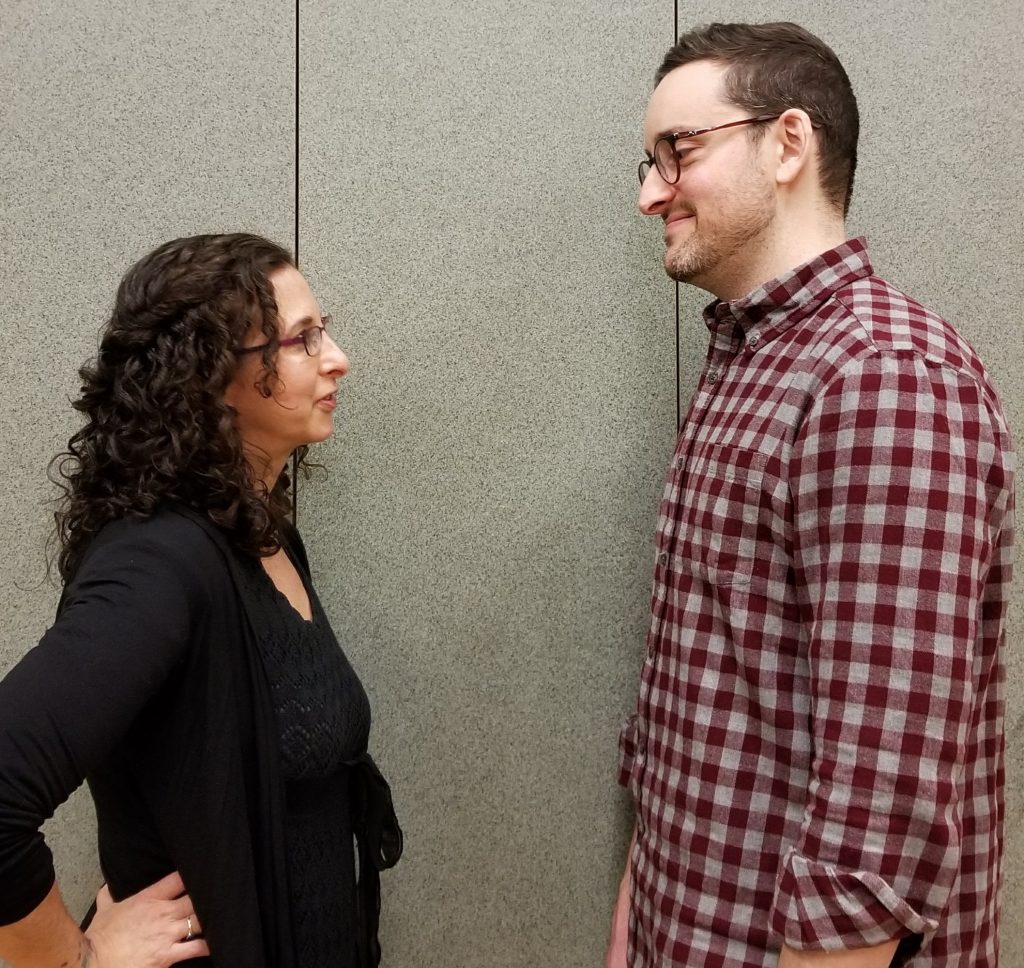 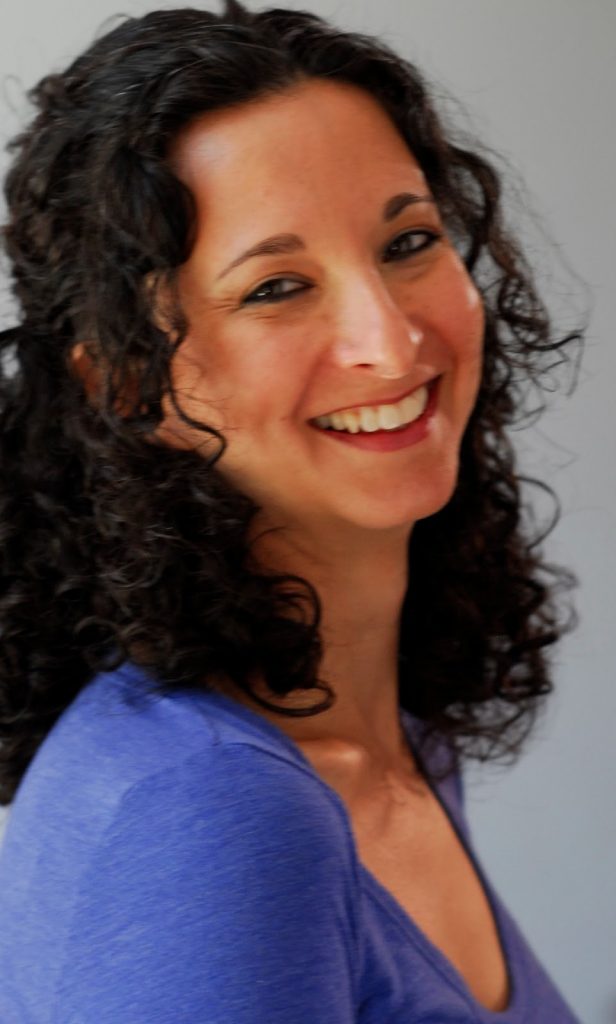 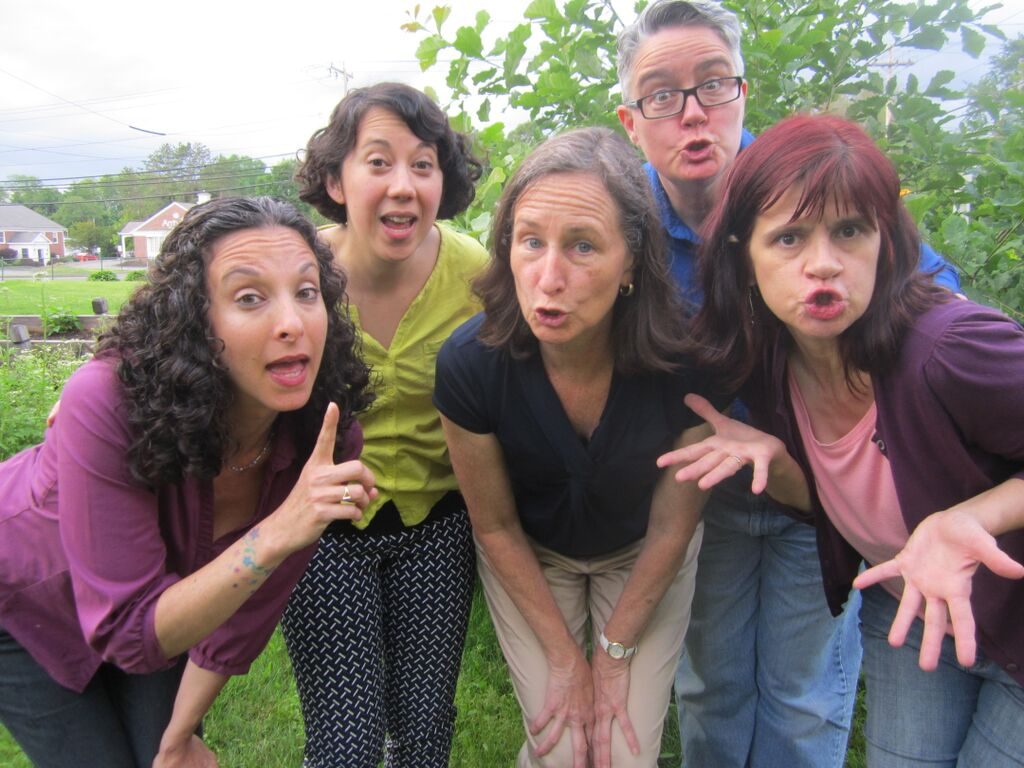 A troupe of high-spirited performers bound onstage and solicit goofy suggestions for characters and situations from the audience. Then they improvise short, snappy scenes based on those prompts. The comedy flows from the incongruities and the improvisers’ quick wits.
That’s classic improv, a staple of live comedy in clubs across the country and a training ground for national gigs like SNL. Around here, a hydra-headed beastie called Happier Valley Comedy is delivering improv to eager audiences — while also stretching the boundaries of the form. 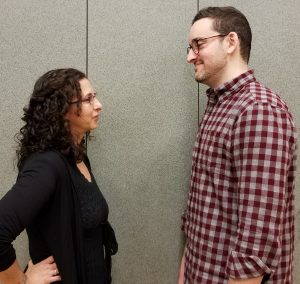 Take, for example, “We Made a Thing,” a two-person experiment in pure improv that starts from literally nothing and doesn’t necessarily go for laughs. It’s a free, weekly dive into the unknown with Happier Valley’s founder/director Pam Victor and Scott Braidman, both of them veterans of the improv craft. A couple of Mondays ago, following one of Victor’s improvisation classes at the Northampton Senior Center, I joined some of her students to experience that night’s installment.

For a moment, the two of them just stood there with neutral expressions. Then Victor said, “Thank you,” and after a pause Braidman replied, “It’s the least I could do.” To which Victor retorted, “Yes, it is. The least.”

Meanwhile, two physical attitudes started developing — Braidman humble and diffident, Victor a bit starchy, her arms crossed warily. Gradually, it emerged that they were standing by her mother’s grave, and he had carved the headstone.

As the encounter continued, personal histories came out and a shy flirtation developed. Some of Victor’s lines were snarky, possible openings for comedy, but the trajectory stayed generally low-key. The scene moved to a café, where Braidman briefly doubled as a chatty waiter, and ended with an unresolved parting. 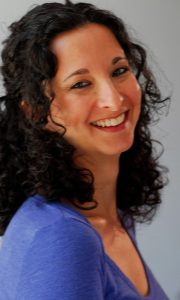 Afterward, Victor insisted that nothing had been pre-planned: “Zilch. Nada. We do not come on with an idea or an intention or a character in mind.”

Braidman chimed in. “We discover who the characters are and what the relationship is by what happens in the first few moments, and then just go moment to moment and see what that character would do in that situation.”
“I’m as surprised as anyone when the show is over and we look back at the people who we’ve been,” Victor added. “I love that sense of wonderment.”

This unpremeditated minimalism is a logical extension of a foundational principle of improvisation: “Yes, and…” Improv works when it’s a collaboration. You don’t contradict what your partner gives you in order to steer the scene in a certain direction, but grab it, whatever it is, and use it.

“Your job is to make each other look good,” Victor had told her class of 15 intermediate-level improvisers earlier that evening. They were taking turns with an exercise called Three-Line Scene, a two-person quickie in which one partner makes up a line, the other responds and the first replies to that cue.

“We use it to practice agreement and acceptance of what their scene partner is offering,” Victor explained. It’s also a doorway into what’s known as longform improv — the no-net experience of improvising without a structure of who/what/where prompts. 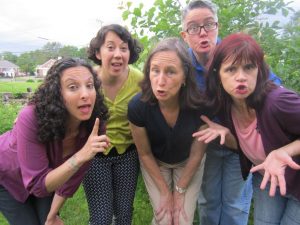 Such prompts, though, are still the bread and butter of many of HVC’s public performances. The headline act is the Ha-Ha’s, a five-woman cadre whose monthly shows in Northampton feature straight-up audience-fueled comedy improv, often with guest troupes. They also do longform structures like “Shrink: Where Freud Meets Funny,” which ad-libs two weeks of therapy sessions.

Other offerings include a monthly Happier Family Comedy Show at the Eric Carle Museum, showcasing current students in HVC’s improv-training program, The Zen of Improv. That title itself goes to the roots of the form, which requires mindful presence along with an openness to “Yes, and…”

The multi-level curriculum runs the gamut from toe-dipping workshops to advanced training. “People have all sorts of reasons for learning improv,” Victor says. “Some people want to do something scary to challenge themselves. Some folks want to learn how to speak more confidently or think on their feet.” Most, she adds, say they do it “because it’s cheaper than therapy.”

Victor has been a professional improviser for 15 years. The ever-growing HVC organization is her brainchild and now her full-time job. Everyone, she emphasizes, gets paid, including performers — a rarity in the field.

She teaches many of the classes herself, in addition to conducting workplace trainings that use improv techniques for professional development. She’s also a member of the Ha-Ha’s and guest-performs with a Boston improv troupe. But the open-ended spontaneity of “We Made a Thing” is where her heart lives these days. “It’s the improvisation I’ve always dreamed of doing.”

The full array of HVC classes, performances and events is at www.happiervalley.com.