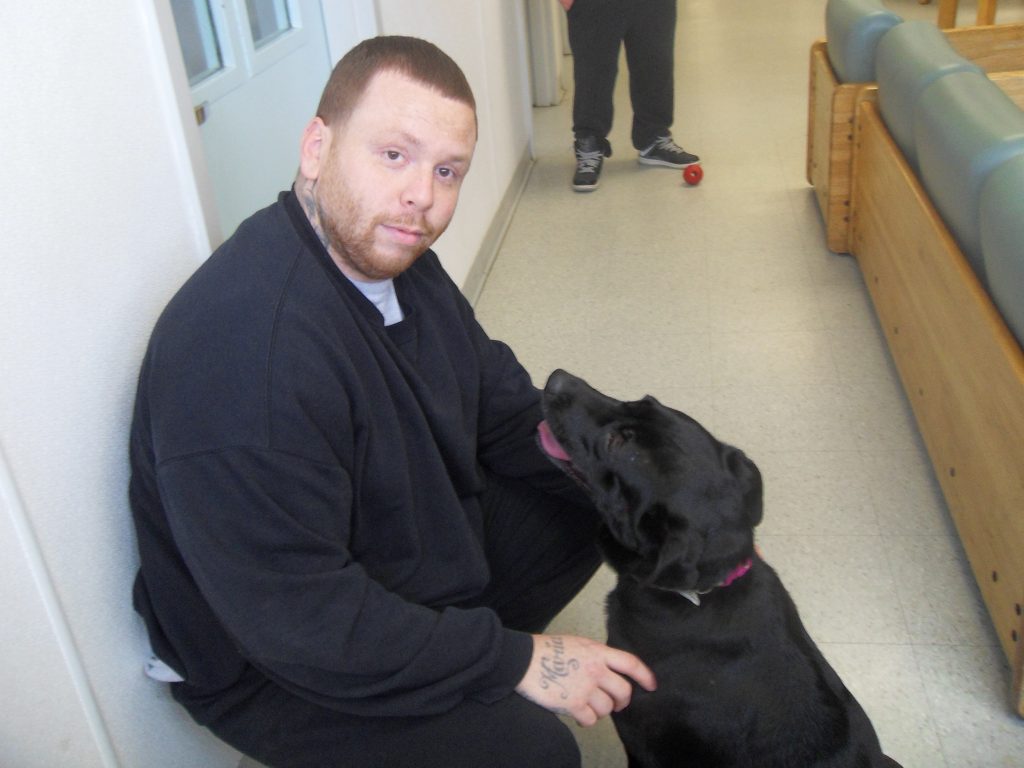 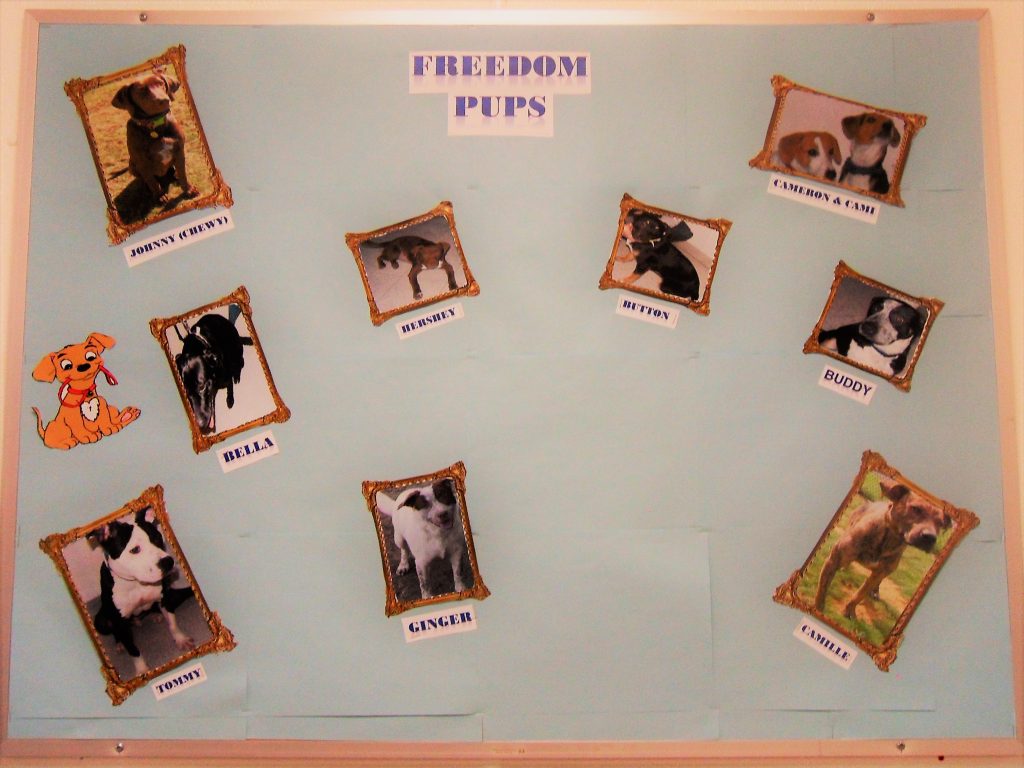 “Come here, Bella,” called Roberto Bigio, 29, to a black lab across the room. The dog trotted over to Bigio, who stood in the corner of the common area in one of the pre-release/ minimum security units at the Hampden County Jail and House of Correction in Ludlow. Bigio is one of the pre-release inmates, known as “residents” at the jail. Bella looked up at Bigio, one of her handlers, with her tail wagging. “Sit,” he commanded. After a brief hesitation, she obeyed and received a treat and praise. “Good girl,” he said and affectionately scratched her head. 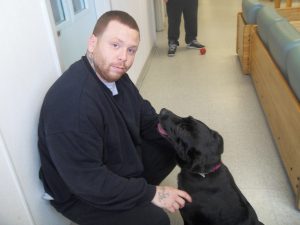 Hampden County Jail and House of Corrections Resident Roberto Bigio, who will be released in September, works with black lab Bella as part of Project Good Dog. Sarah Heinonen photo

This is Project Good Dog in action. Known as Freedom Pups within the jail, it is a program that pairs dogs with behavioral issues that make them unadoptable with residents who are within three to six months of release. The dogs reside with the residents for a period of approximately eight weeks. During that time the residents train the dogs on a number of basic commands and help the dogs socialize with people and the other dogs.

The program was created in 2015 by Second Chance Animal Services of East Brookfield. It was originally designed as a partnership between Second Chance and two facilities within the Worcester County Department of Corrections.

The jail built a fenced-in yard directly outside the unit for the dogs to get exercise. When the weather is nicer, the residents will bring the dogs to the on-site track for more play and exercise opportunities.

“My vision of the program was that the time [the residents] spent caring for something would help them become a better person, better husband, and father,” Cocchi said. He said the program teaches them to care for others.

Resident Michael Rivera, 41, agrees. “If I have a bad day, I catch up with the dogs for exercise. It keeps you focused. To me, that’s therapy.”

Brigit Denery, who works security in the unit, said since the dogs arrived the residents are happier and there’s a lighter mood in the unit.

Currently, Bella is the only dog at the jail. Nine other dogs have completed the program. All of them have been successfully adopted.

“About half of them have been adopted by staff here,” said Brian Hoar, the minimum/pre-release center assistant deputy superintendent. “Sometimes they’re already committed to a home,” added Cocchi, but not all of them. 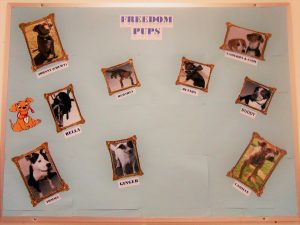 A bulletin board of the dogs who have been adopted as part of Project Good Dog. Photo by Sarah Heinonen

“They’re all rescue dogs,” said Benjamin Rodriguez, 26. “Some have been abused.”

“Some of them came up from the hurricanes,” added Rivera, referring to Hurricanes Harvey and Irma, that hit this past summer in Houston and Florida, respectively.

It can be difficult for the residents to say goodbye to the dogs. Bigio rubbed Bella’s belly and joked, “She ain’t going nowhere.” Many of the residents have dogs at home waiting for them, but some have thought about the opportunity to adopt the dogs they work with. Rodriguez said he considered adopting Buttons, a young black dog with brown legs that he had handled. “If they brought her back, I’d take her.”

The time that the men and dogs have spent together has had benefits for both. When the residents are released in a few month’s time, their experience working with the rescue dogs will likely stay with them. “The residents have asked about jobs in the field,” when they get out, said Denery.

The parallels between the residents and the dogs around getting a new opportunity in life is not lost on Bigio. “They get a second chance at getting adopted. It’s better than being behind walls,” he said.