Down to Earth: The Land Through Native Eyes 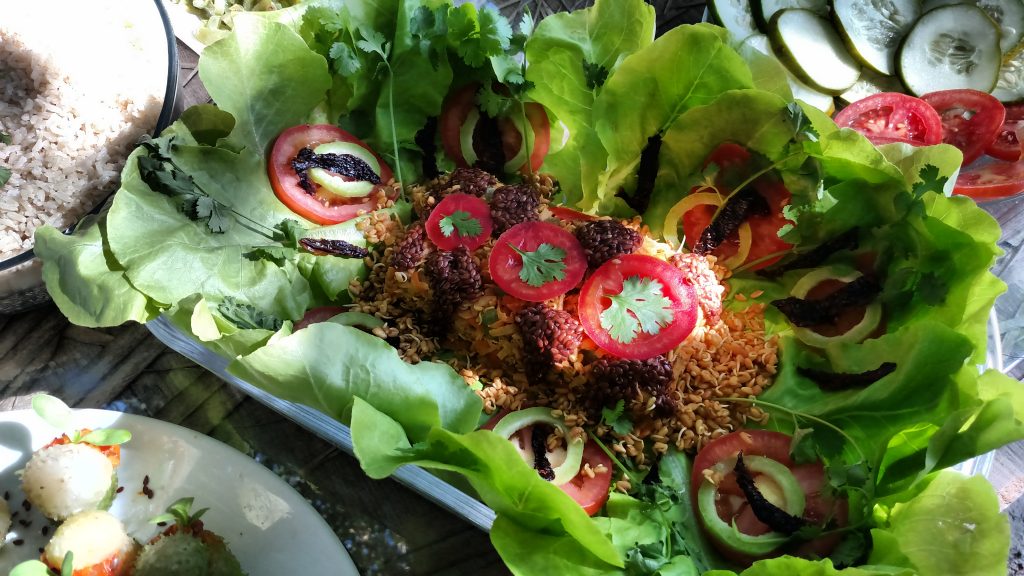 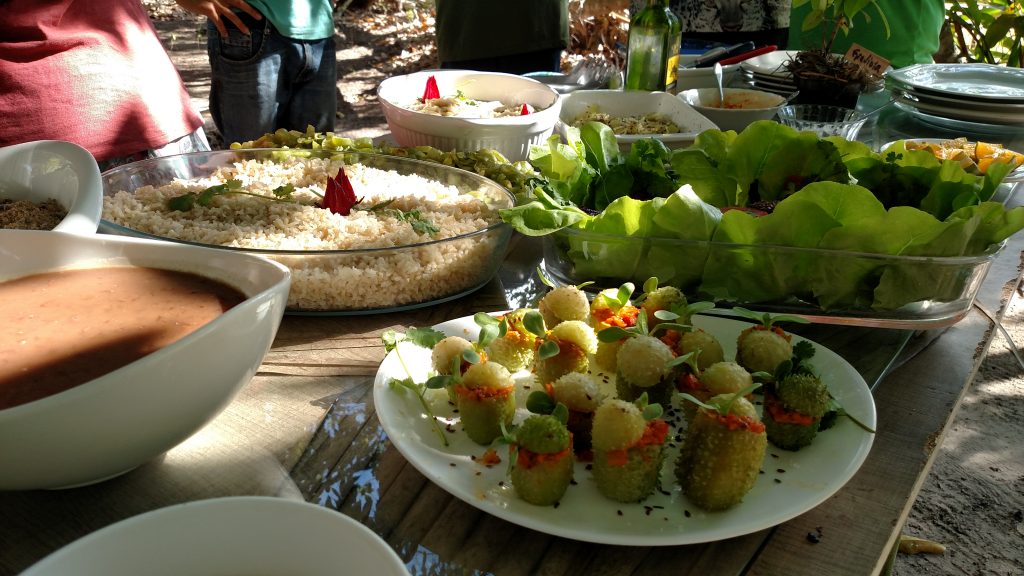 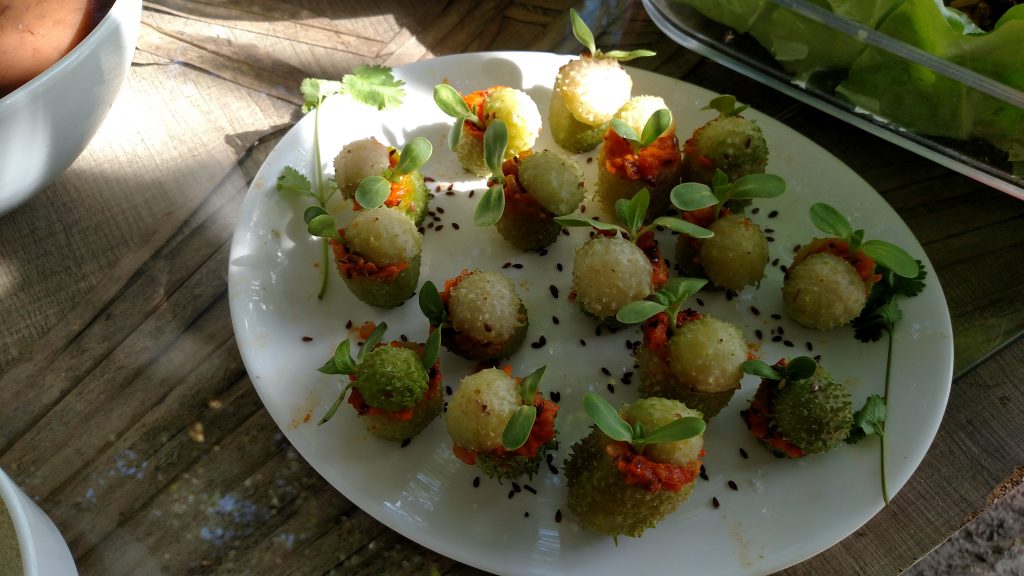 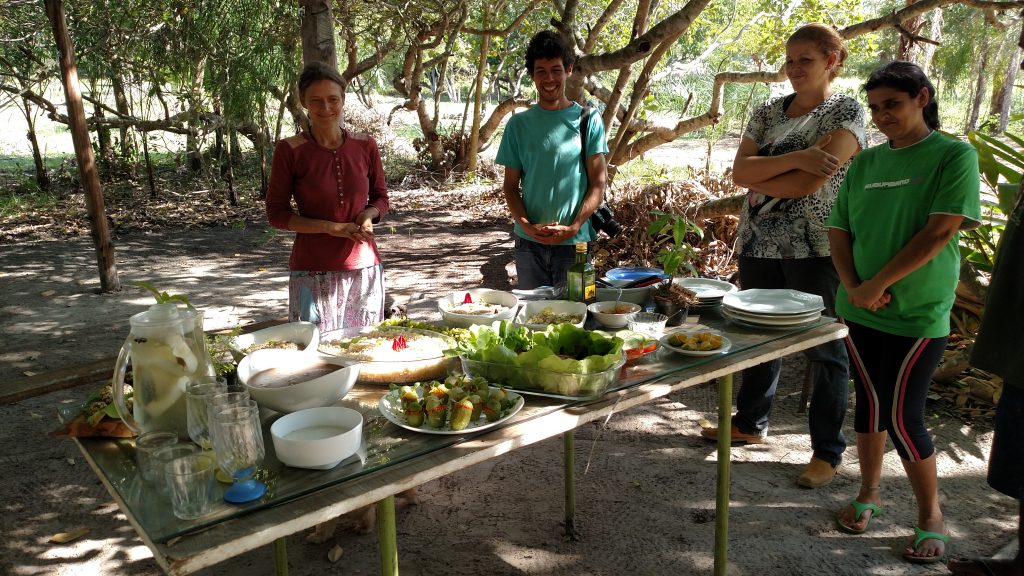 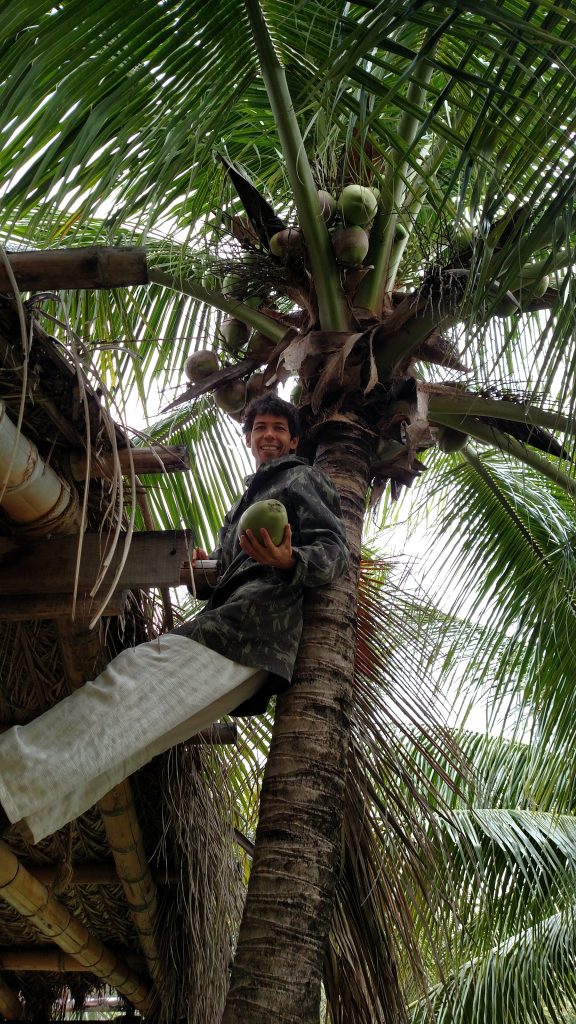 Two summers ago, I visited the grasslands of southwestern Brazil. I stayed at a fazenda, a farm property offering lodging for tourists on the side. Our pousada or lodge was especially tiny as these properties go – run by a woman and her partner who had rented space on the farm for their small business.

We grew friendly with our hosts over the week.  Eventually, Mirjam and Wagner invited us to visit a nascent commune they were creating in a nearby village.  There, with friends, they were trying to design a new and sustainable model of small farming. 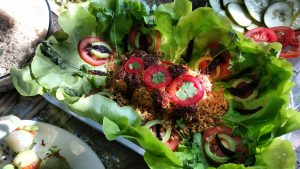 Mirjam, who had immigrated to Brazil from Germany nine years earlier, spoke with passionate disdain of “agrotox” – the cocktail of pesticides, fertilizer, and genetically modified seeds distributed and applied by big chemical and agricultural companies.

Wagner, whose indigenous blood showed in his dark skin and almond eyes, showed us the circlets of their own vegetable beds: beans, tomatoes, bananas.  The system, he explained, is called “agrofloresta” – growing plants together in mounds, seeking to harness each plant’s properties to create a more favorable environment for the growth of plants alongside it, just as in the forest.

He showed us plants with high nutritive value but not commonly farmed – plants known and used by indigenous Brazilians of the region.  He had put together a display case of these seeds and beans which he poured into our palms for us to investigate.

When we left, he gave us a gift of a small packet of seeds.  “Our goal is to spread the use of these plants,” he said, “and for more people to be self-sufficient.” 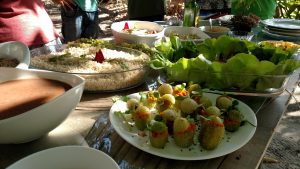 Wagner and Mirjam’s project speaks to the deep knowledge of landscape practices embedded in many indigenous traditions, from Brazil all the way up to our own New England. Increasingly, experts and laymen are pointing to these traditions as potentially healthier ways to engage with both the natural world and one another.

Recently, I attended a talk at Amherst College by Lisa Brooks, professor of English and American Studies who is expert in the indigenous history of the Pioneer Valley.  Her research, including her new book Our Beloved Kin: A New History of King Philip’s War, explores the relationship of Native Americans and land.

Brooks will also read from and speak about her work alongside Abenaki poet Cheryl Savageau and local writer Jillian Hensley in an event at the Forbes Library titled “Native Americans and the Land,” March 21 at 7 pm. 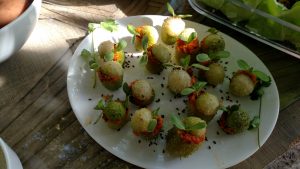 Agriculture provided a framework for communication and exchange among Native populations.  Corn spread across the continent along trade routes that linked New England north to Quebec, and south as far as Mexico.

Along with the corn trade came more than just the plant.  “Corn mother” stories followed trade routes, said Brooks, embedding information about corn cultivation, but also ideas of social order and governance, and lessons in how to adapt and survive.

There is “very little evidence of warfare here in pre-colonial times,” Brooks said.  “There seems to have been a system to distribute resources to ameliorate conflict.”

Such systems were vital among communities that lived on land ranging from the fertile bottomlands of the Connecticut River Valley to the rockier, nutrient poor ground of nearby hilltowns and the farther Berkshires and Appalachians. 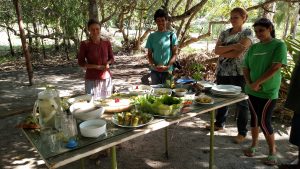 Mirjam Goring, owner of the pousada or lodge Pantanal Ranch Meia Lua, her partner Wagner, and their staff serve food prepared from their produce grown via indigenous agricultural methods.

Annual festivities during spring fish runs and harvest season served as festivals of redistribution, ensuring that Native populations would have sufficient food and natural resources to survive.  Marriage offered another tactic to build alliances. Through kinship networks, warfare could be averted.

With the colonists came new economic systems, including the notion of debt.  These frameworks, Brooks said, led among many changes to a decline in power for Native women, who had dominated agriculture, owned land and homes, and taken leading roles in arranging alliances.

The clash between perspectives came to a symbolic head during a battle at the base of Mount Sugarloaf described in Brooks’ book. The indigenous name for the mountain is Ktsi Amiskw, the Great Beaver, a figure who stands at the center of a Native legend that emphasizes sharing of resources.

The Abenaki tale describes how Ktsi Amiskw wished to keep for himself the waters of a great pond – likely a depiction of glacial Lake Hitchcock, which occupied the Connecticut River basin until it drained in several abrupt events some 12,000 years ago.

Legends about relationship to land also abound in the mythology of the Guarani, a group of native peoples who hail from the region of Paraguay and southern Brazil where I stayed at the pousada.

The Guarani tell of the “yvy marã’ ey,” often translated as “land without evil,” or a kind of paradise, says Malcolm McNee, professor of Portuguese and Brazilian Studies at Smith College.  Unlike the Western notion of paradise as accessible only beyond earth, however, the Guarani see the yvy marã’ ey as a real, ecologically uncorrupted earthly landscape. 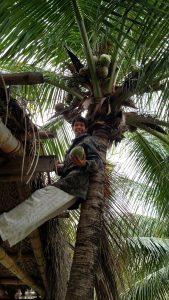 At the pousada or lodge Pantanal Ranch Meia Lua in Miranda, Brazil, Wagner harvests a coconut.

McNee suggests a translation by Brazilian poet Josely Baptista as more accurate – “land that cannot be destroyed or exhausted.” Being whole, such a landscape offers its people and creatures the full resource richness of an undamaged place.

The idea carries an important sense of responsibility.  If paradise can be present on earth, it is intrinsically bound up with environmental health. The opposite of yvy marã’ ey, then, is land that has been exhausted, sucked of its riches through misuse, abuse or exploitation – a version of original sin.

The search for yvy marã’ ey can be seen as equivalent to our modern search for sustainability, says McNee.  If we wish to be without evil, we have a responsibility to care for the land, to keep it or return it to an uncorrupted state.

All humans, I think, have the capacity to create destruction in the nature around them, and I’m cautious about depicting any human group as offering a panacea for modern environmental crises.  With Elizabeth Kolbert in her brilliant book The Sixth Extinction, I tend to think that “with [our] capacity to represent the world in signs and symbols comes the capacity to change it, which, as it happens, is also the capacity to destroy it” – a tendency against which all human beings must constantly be on guard.

Yet we’re also at a moment when the #NoDAPL movement and the increasingly visible leadership of Native communities in activism for our water and air have brought the many insightful perspectives and mindsets of these groups – whether about land or communal sharing and responsibility for resources – to the fore.

As we struggle to envision a healthier relationship with our natural world, looking through the eyes of other cultural imaginations has never been more relevant.

I still have Wagner’s seeds, carefully kept in their paper packet .  They are brown and tan, striped and solid, walnut, acorn, and pea-sized.  “The only thing we ask with these seeds,” Wagner said as he entrusted them to my palm, “is that you either plant them, or share them.”