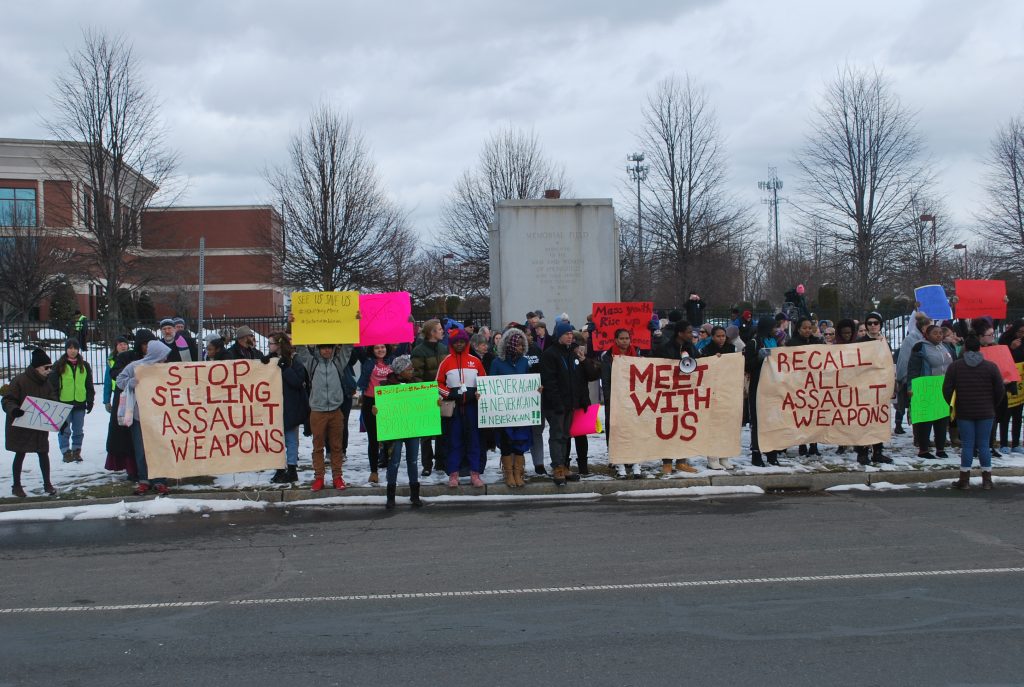 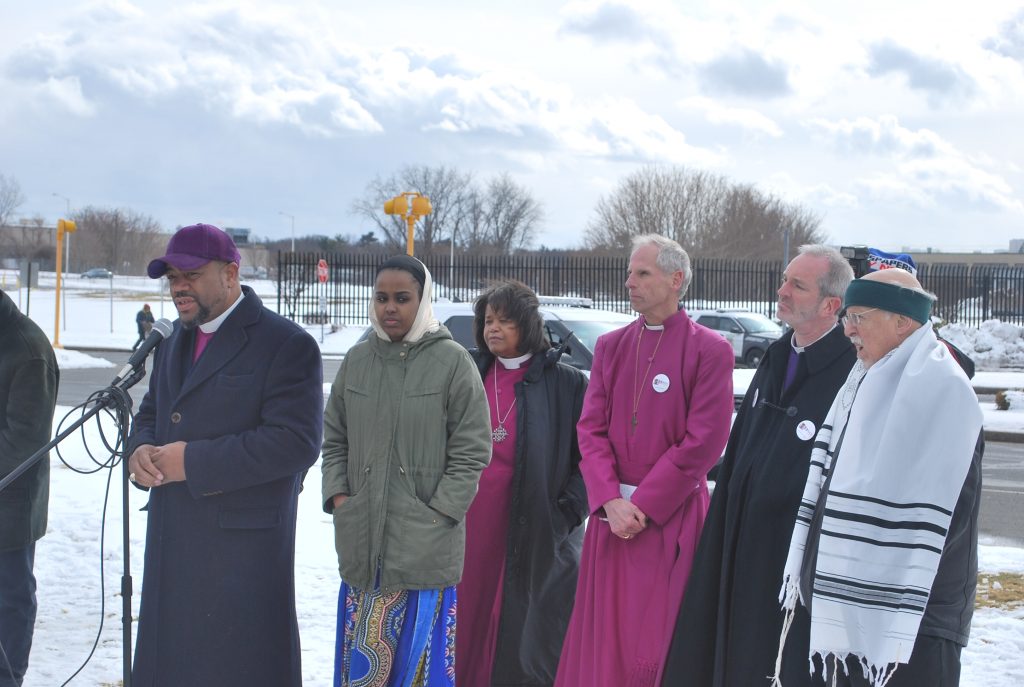 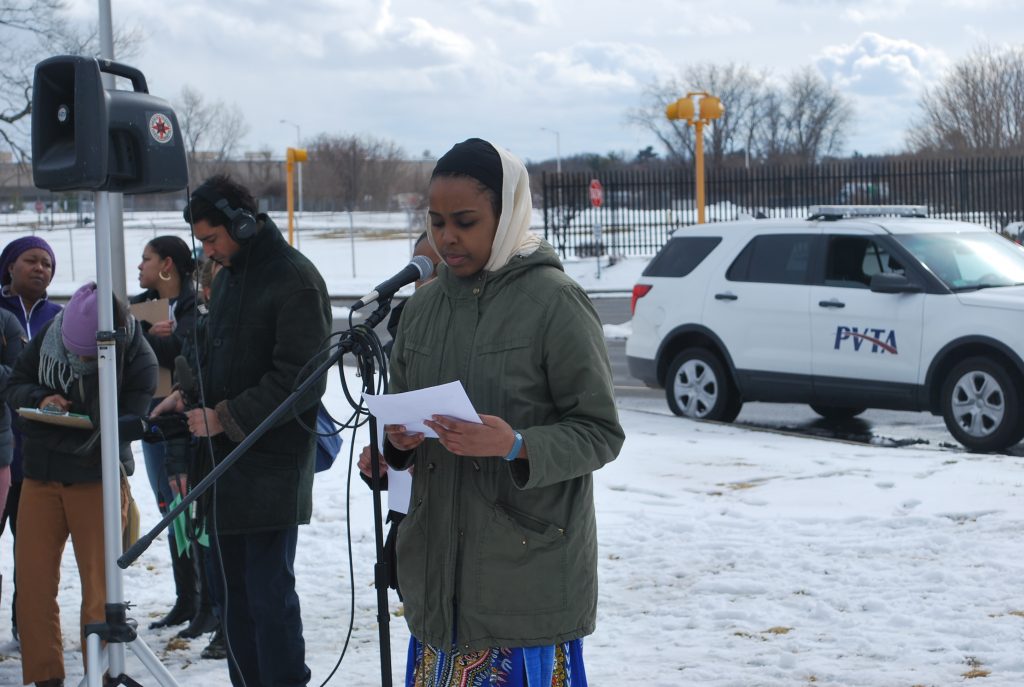 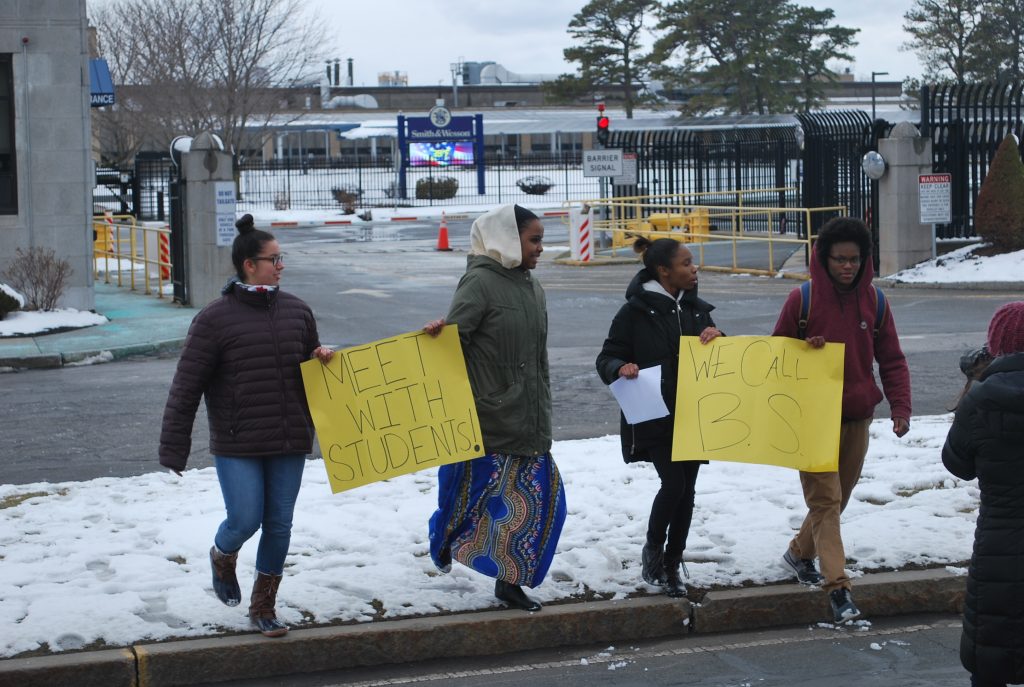 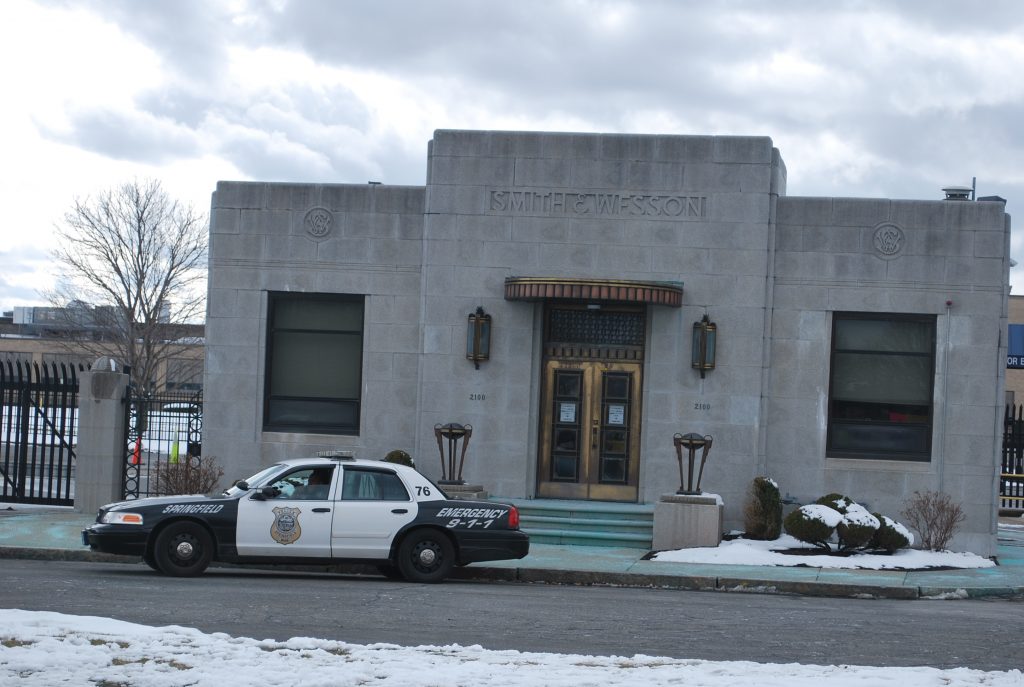 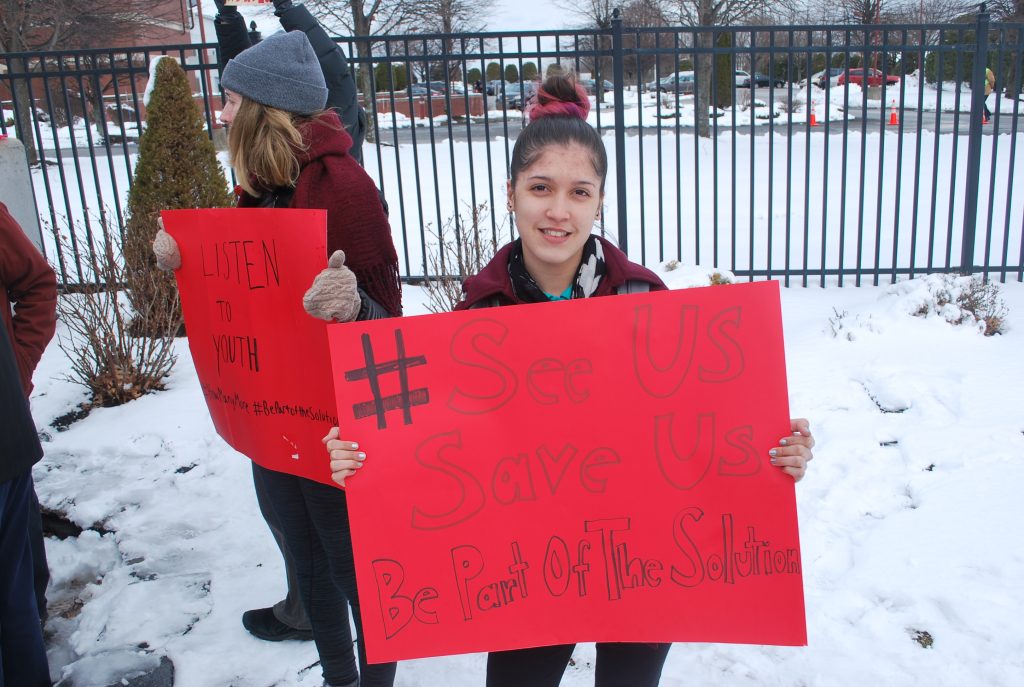 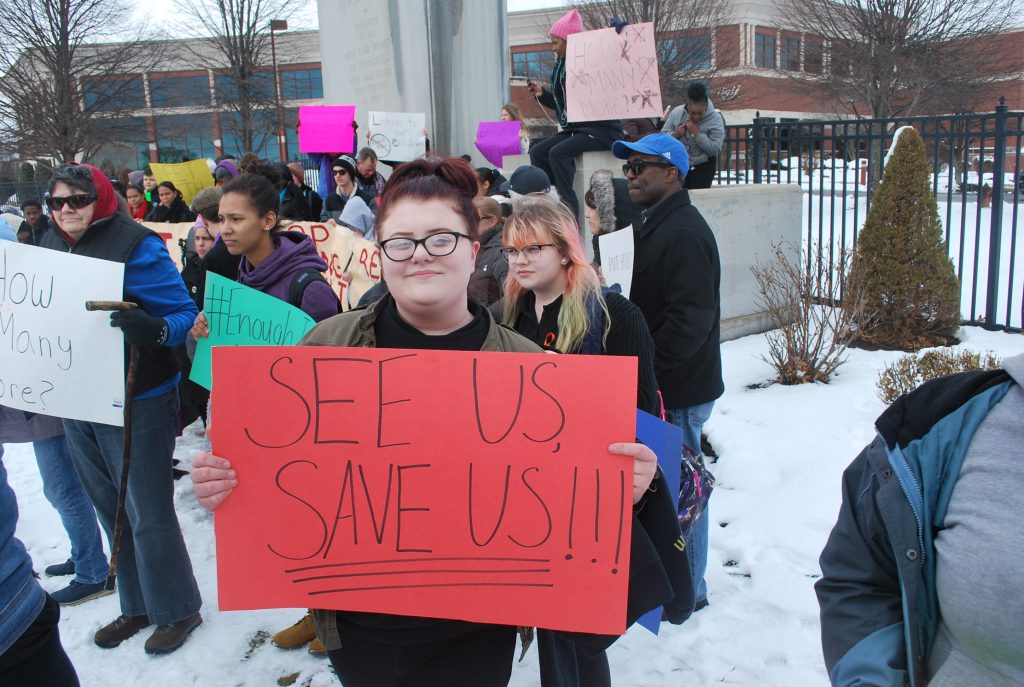 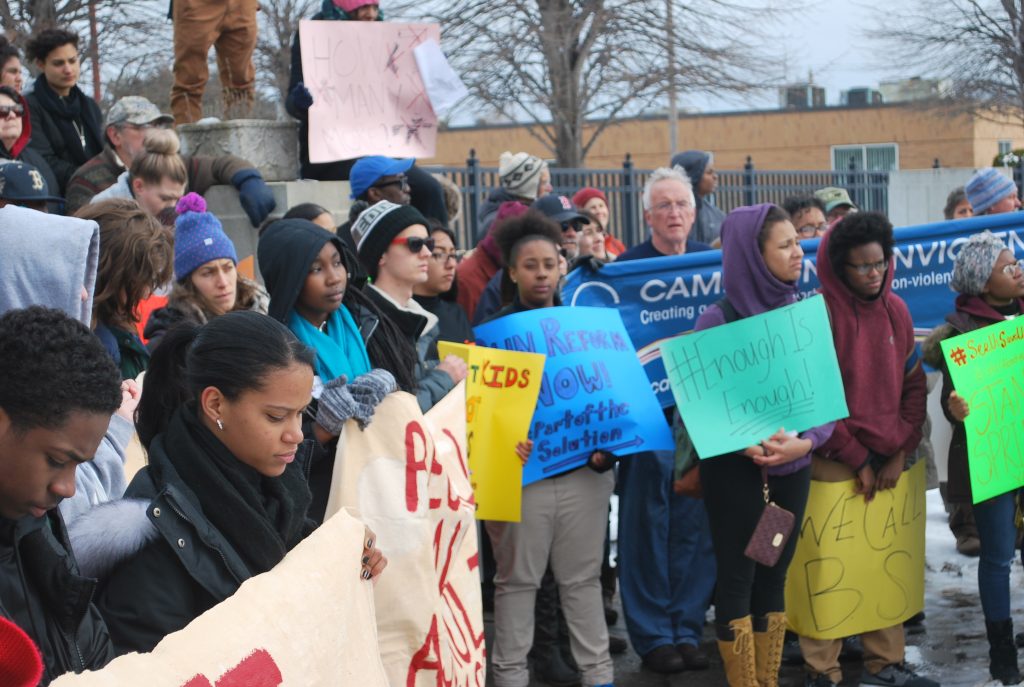 Local students want to meet with P. James Debney, CEO of Springfield-based gun manufacturer Smith & Wesson, in the next 30 days to create a dialogue about ways to end urban gun violence, not just mass shootings. 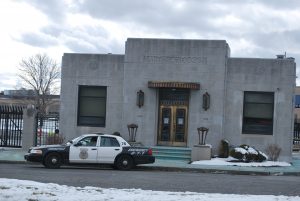 The front entrance of Smith & Wesson in Springfield. Photo by Chris Goudreau

Students from Springfield, Holyoke, and Boston alongside faith leaders and members of the Pioneer Valley Project rallied on March 14 at Memorial Field, across the street from Smith & Wesson’s global headquarters on Roosevelt Street in Springfield, chanting that if representatives from the arms manufacturer refused to meet in the next 30 days, they’ll be back to protest. 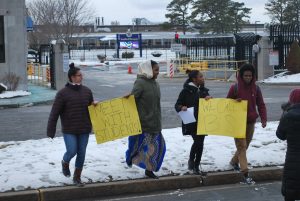 Students from Springfield and Boston delivered a message to meet with Smith & Wesson’s CEO to security officers. Photo by Chris Goudreau

A handful of students delivered a list of demands to security staff outside the gated main entrance where four Springfield police cruisers were parked.

Nyasia Jordan, a student from Springfield Central High School, said she thinks Smith & Wesson needs to take accountability for their role in the gun violence created in cities such as Springfield and Holyoke.

“When mass shootings occur, our attention is usually directed to suburban areas with predominately white children and families, but when it happens somewhere such as here, Boston, or Holyoke, the attention is directed away from us and it’s not a topic of gun reform, it’s a topic of black on black crime,” she said. “We want to turn that attention to the guns now because that is ultimately what it comes down to.” 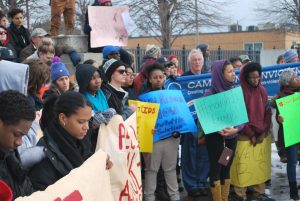 Attendees bowed their heads during a moment of silence for victims of gun violence. Photo by Chris Goudreau

Ekran Sharif, a student at Edward M. Kennedy Academy for Health Careers in Boston, said the list of demands to Smith & Wesson include a meeting with Debney to find possible ways the company could be a part of the solution with ending gun violence, reparations to urban communities impacted by gun violence, and an end to manufacturing the M&P15 rifle, which has been used in mass shootings such as the 2012 Aurora, Colorado, shooting where 12 people were killed and the 2015 San Bernardino, California, where 16 people lost their lives. 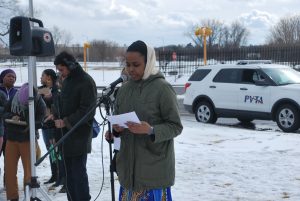 “The death of a child in Springfield or Boston matters just as much as the death of any child from Parkland,” she said. “The trauma of losing a loved one is just as great no matter if it’s Sandy Hook or Chicago.”

Faith leaders also spoke about the importance of youth activism in promoting gun reform across the United States.

Rev. Talbert Swan II, pastor of Spring of Hope Church of God in Christ in Springfield, said he’s used to seeing young people die because of gun violence and has become weary presiding over funerals of youth who died in their teens. 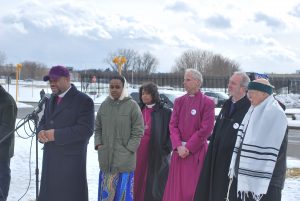 Rev. Talbert Swan II, pastor of Spring of Hope Church of God in Christ in Springfield, (left) and other faith leaders rallied behind students calling for a meeting with Smith & Wesson to discuss gun violence. Chris Goudreau photo

“You calling for a meeting is the minimum that someone should be willing to do, to sit down and how we work together to stop the bloodshed,” he said. “I’m a resident here in Springfield and this won’t be the last time we call for a meeting with Smith & Wesson because I declare to you that we won’t rest until they agree to meet with us.”

Swan said although he believes in the power of prayer, he thinks it’s not enough when someone loses their life to gun violence.

“I know the pain and I know that until we do something about it, it’s not going to stop,” he said. “It’s interesting, the prophet Joel said, ‘The youth shall see visions’ and I think it’s you, who are our young people, that are going to make a difference. So don’t stop speaking out. Don’t let your voices be silent.”

Several students in the crowd of more than 50 people spoke with the Valley Advocate about protests and student walkouts taking part across the nation that day to call for gun reform.

Mariangely Ortiz, a 16-year-old junior at Roger L. Putnam Vocational Technical Academy in Springfield, said she thinks there should be restrictions on buying guns. 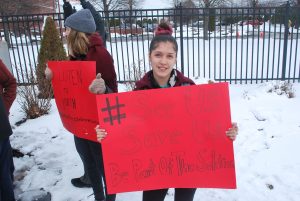 Hollie Cutler, a 16-year-old sophomore at Central High School in Springfield, said she thinks gun violence is out of hand across the country. 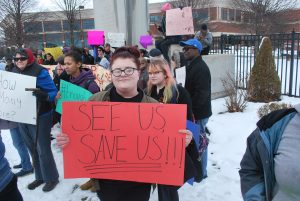 “Seventeen lives were lost and were not doing enough about it,” she said. “It can happen anywhere at any moment, not just specifically my school.”

Francenia Brown, a resident of Springfield,  spoke at the protest about how she lost her 20-year-old son Tyrell to gun violence.

“Every time someone gets killed by gun violence, it brings back the pain and the memory of the horrible loss that I felt when a parent loses a child,” Brown said. “No parent should have to go through losing a child. No more lives should be lost because of gun violence. Being a parent to a young man of color, another painful part of the loss is the often presumption of a criminal background when a young black man is killed by gun violence. A loss of life is a loss life. My child in Springfield is just as precious as a child in Parkland.”