Monte Belmonte Wines: So What Is Kosher Wine, Anyway? 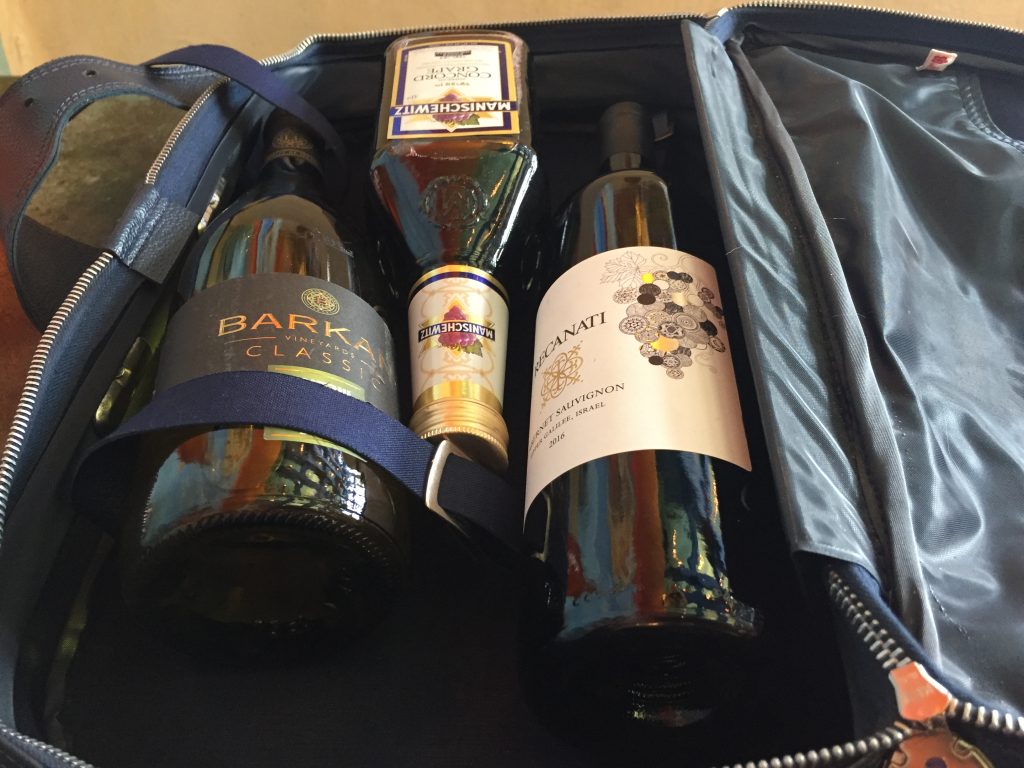 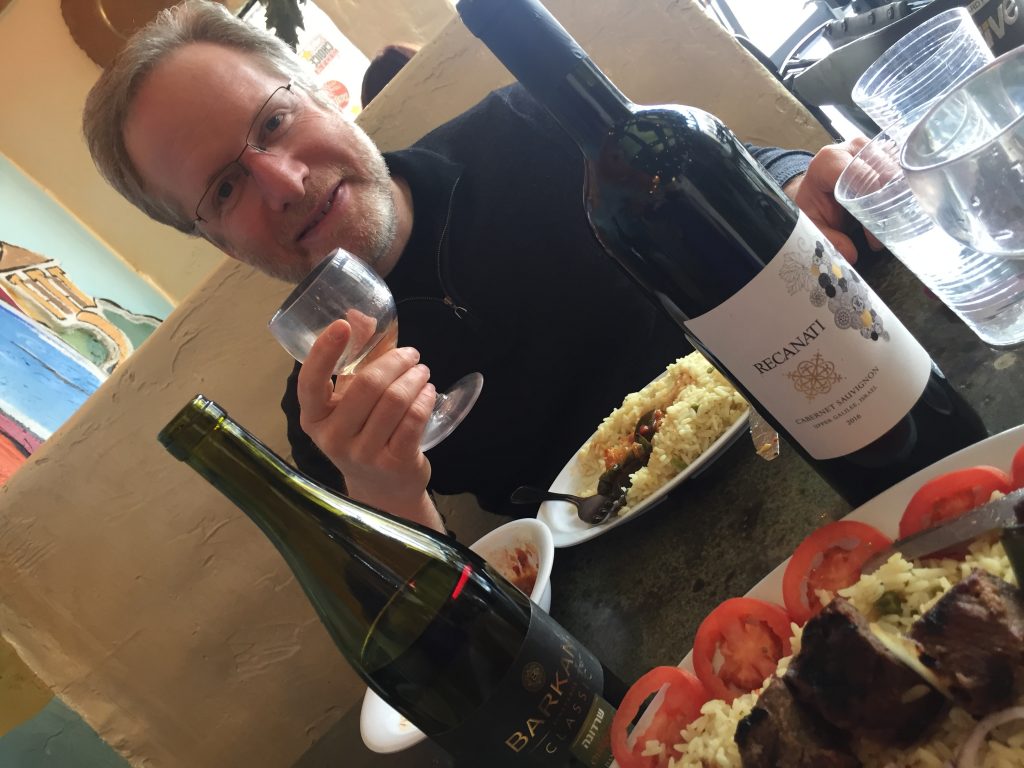 “There’s nothing in the Torah about the Passover Seder. We first hear of it about 2000 years ago in a book of Rabbinic custom and law called the Mishnah. And the first thing they talk about is that everyone has to have four cups of wine.”

Well G-d, if you insist! I grew up Catholic. And allegedly during the Mass, the wine changes to the blood of Christ. And also allegedly, we parishioners were supposed to get to drink some. But as far as I could tell, the priest always hogged it all. But for the Jews at Passover, FOUR cups each! Thus sayeth my lunch date at Filo’s Greek Restaurant in Northampton, Rabbi Justin David of Congregation B’Nai Israel. He’s the rabbi that got arrested with a bunch of other rabbi’s outside Trump Tower last year. He also got arrested protesting outside the ICE offices in Springfield last year. As a conservative rabbi, he’s very progressive. I took him to Filo’s to learn about kosher wine. Filo’s is a great place to do a tasting because the food is really good and it’s BYOB. The Rabbi speaks: 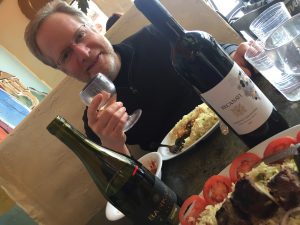 “The Mishnah says that even the poor need to be given four cups of wine. And it also delineates when you drink the four cups. One at the very beginning. One at the beginning of telling the Passover story. One when you finish eating and one at the very end. So where does this come from? Scholars think that the Seder appropriates a typical Roman meal and repurposes it to celebrate Passover.”

Then the early Christians — who were Jews — steal the meal the Jews appropriated from the Romans and start calling the Passover Seder they celebrated with Jesus “The Last Supper.” Then the Romans steal it all back when the Holy Roman Empire takes over a large swath of Christianity. And every week Roman Catholics, like my family, eat a very untasty wafer that is supposed to be Christ’s body and watch a priest drinking wine that is supposed to be Christ’s blood. Gross.

Passover wine needs to be kosher. So, what makes a kosher wine kosher?

“This comes from the Talmud 2000 years ago. When they were figuring out these laws, they were concerned about drinking wine that was made by Roman pagans. Because if a Roman pagan made the wine, you don’t know if they made it to be poured out as a libation to one of the gods.”

Like Bacchus — the Roman god of wine and my current favorite deity.

Seeing as little of the wine produced in the world is likely to have been designed for libations to Bacchus, what else makes a kosher wine kosher?

“The wine has to be supervised from start to finish, which is actually kind of a legal fiction with so many mass-produced wines. But there are some issues that do come up. Some wine is made with fining agents and sometimes these agents are made from dairy or meat products. And you can’t consume meat products from a non-kosher animal.” 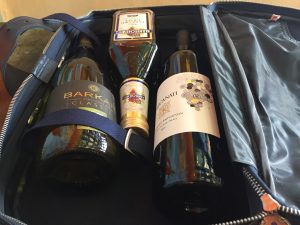 What’s the difference between kosher wine and “kosher for Passover” wine?

“With Passover there is the additional requirement that you not consume anything that has leaven in it. Most kosher wine is also kosher for Passover. But to label it kosher for Passover, there is usually a kosher symbol and a P next to it. There are different kosher certifying organizations. The Orthodox Union or the OU is probably the most prominent. But there are other smaller ones too. OU is usually accepted by most everyone, but some people don’t think it’s kosher enough. These wines we have here are not what’s called mevosaul. Some people heat the wine as a method to keep it kosher.

As if heating it up could boil the Bacchus away. How hard is it to keep kosher?

“I grew up eating Burger King. But I stayed away from cheeseburgers. My family didn’t keep kosher but I remember as a kid knowing what it was and developing an aversion to shellfish.”

“As an adult, the way we eat is a way to identify ourselves with a culture. I decided to keep kosher in my early 20s because I really wanted to be on the inside of Jewish culture. And keeping kosher, like nothing else, really makes me feel like a Jew.”

Jew and Gentile alike, if you have ever heard anything about kosher wine, the first wine you probably think of is Manischewitz. It is a wine that is looked upon poorly by wine snobs. But we will get to that later. I’ve brought two quality kosher wines from Israel for us to try with my lamb kebabs and the Rabbi’s veggie platter.

“So this Barkan is a Chardonnay from Dan. Dan is in Northern Israel. An archaeological dig found evidence of remains to the House of David there. It’s a very fertile area but very rocky and dry. It’s kind of severe.”

But the more the severe the conditions, the better the grape. It’s almost a spiritual metaphor. If the vines have to work hard to produce fruit, the grapes have better character. Grapes that have been in distress often create better wines. This Chardonnay is surprisingly good. More subdued than say most California Chardonnay, with the sharpness of a crisp green apple.

“It goes well with my vegetables. I’ll take a bissel more.” I love Yiddish.

The next wine we try is a 2016 Recanati Cabernet Sauvignon from the Galilee region in Israel.

“The interesting thing about Recanati is it’s a prestigious name in Jewish culture. There was a famous rabbi named Recanati in about the 16th Century in Italy who was a great mystical scholar. But also in modern times there is a Recanati family that is very successful and one of the business schools in Tel Aviv is named after the family.

The Recanati’s got an alcohol burn to the finish. At 14 percent alcohol by volume, it’s a little higher than the average 12.5 percent wine. Dark fruit. Black cherry. It’s going great with the lamb. The 2014 Recanati was on the Wine Spectator Top 100 list. I’m surprised at how much I like these Israeli wines. But should I feel bad about buying wines from Israel, given the horrible oppression the Palestinians suffer under? What does the Rabbi think?

“It’s tough. For me, I make a big distinction between the politics of Israel and the people. You know the government is a disaster and the politics are a disaster and the history is both triumph and tragedy. Triumph for Jews who moved from parts of the globe where their families were killed. Tragedy, of course, because there was war. There was dispossession and displacement of hundreds of thousands of Palestinians and the ongoing occupation of Gaza. There are people on both sides who are trying to do things differently. I personally won’t buy products from the West Bank. Though there are wines that originate in the West Bank that I’m sure are great.”

“So, we have this Manischewitz here.” I pour him a bissel. “Alright, that’s enough. So, here’s the thing about Manischewitz. A wine snob will tell you this is not wine.”

Eleven percent ABV. Made from not less than 51 percent Concord grapes grown in New York somewhere. Specially sweetened. It tastes exactly like Welch’s grape jelly. I admit, I’m kind of into it. My jelly getting me shitfaced is my jam. It’s also kosher for Passover. Why has Manischewitz taken off in the Jewish community?

“It’s the kind of wine you can buy by the volume. The bigger it is the cheaper it is. Kind of like cheap perfume. It works as ritual wine because there’s a lot of wine in Jewish ritual from week to week. Even at a Passover Seder, everyone has to have FOUR cups of wine. I’m not really into blowing hundreds of dollars on wine. People associate this taste, as declassee as it is, with countless dinners, and childhood, and holidays, and special occasions, and life cycle moments. My mom insists on Manischewitz at Passover, even though she is usually a snob when it comes to food. I think all of these kosher wines have a place. Recanati kosher wine from Israel is high class and lovely but there is something so Jewish about Manischewitz in a square bottle.”