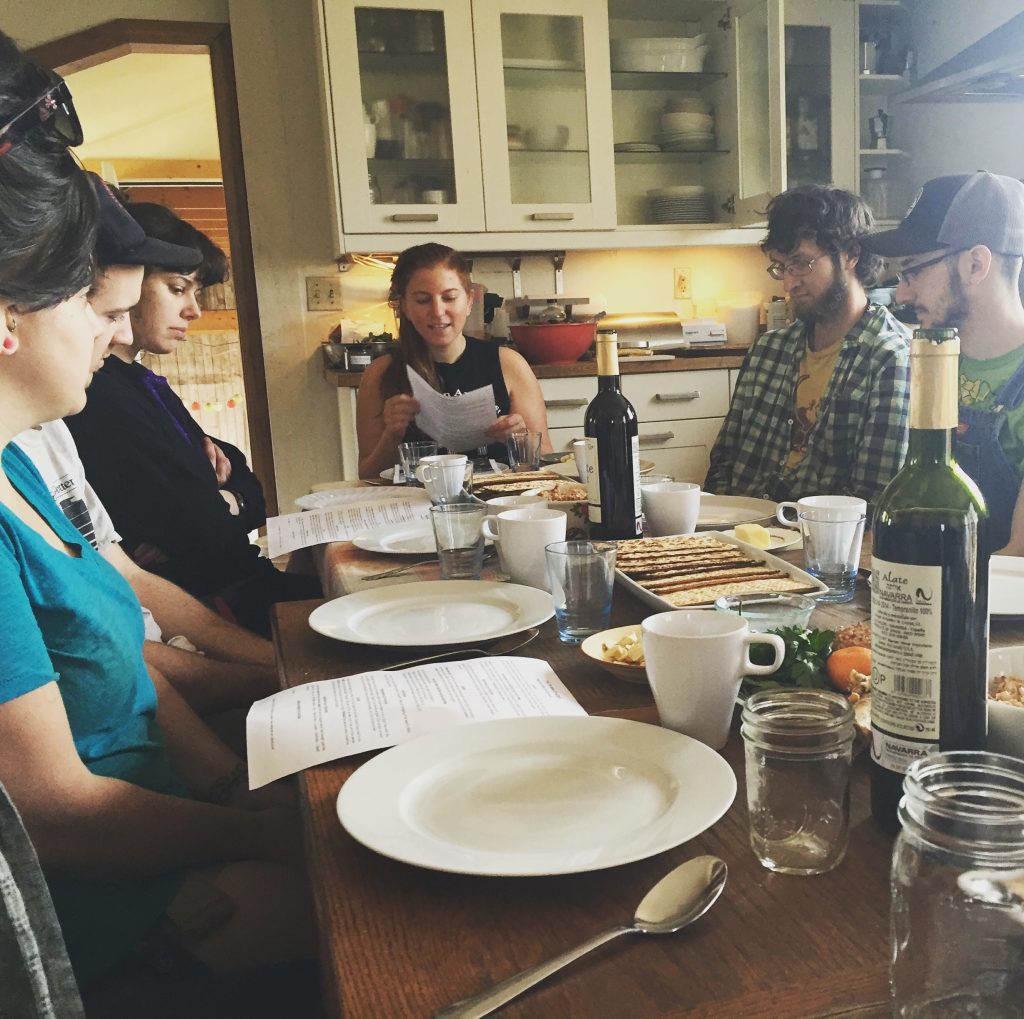 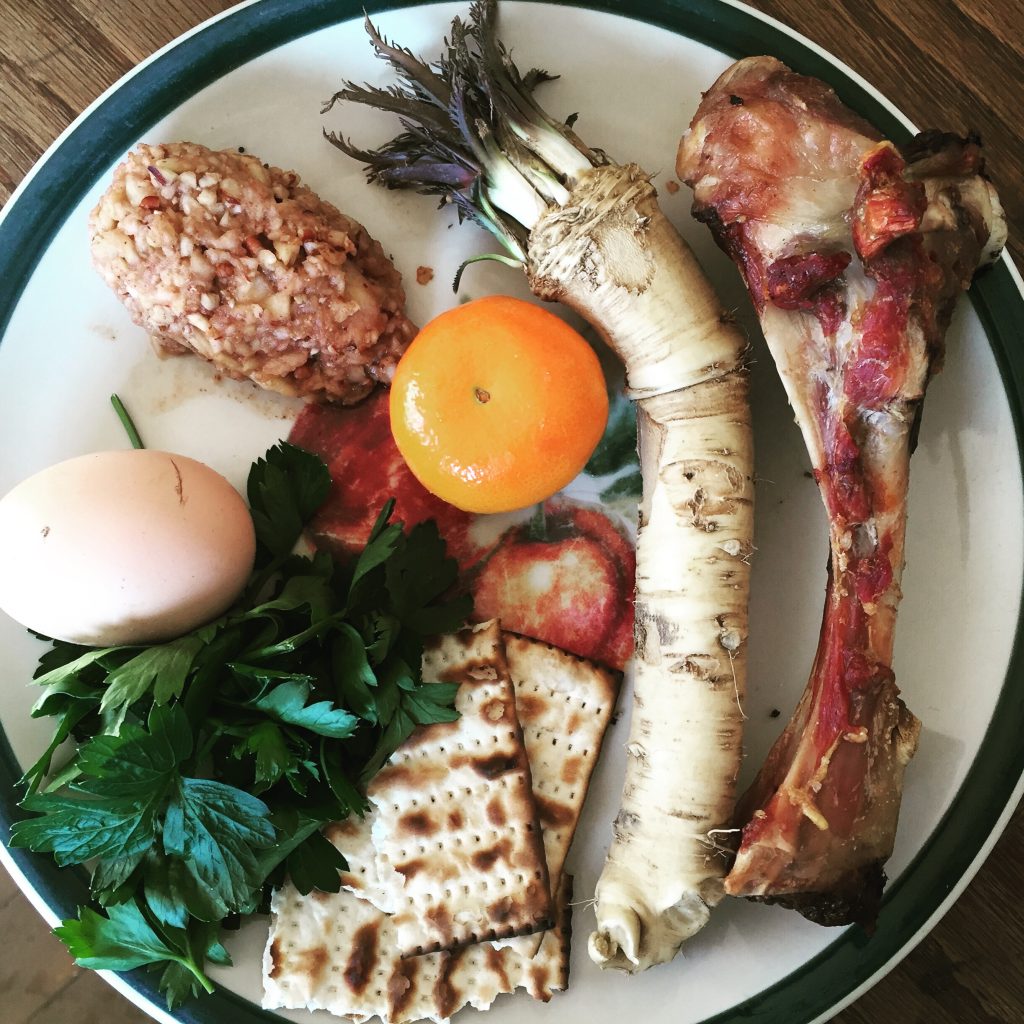 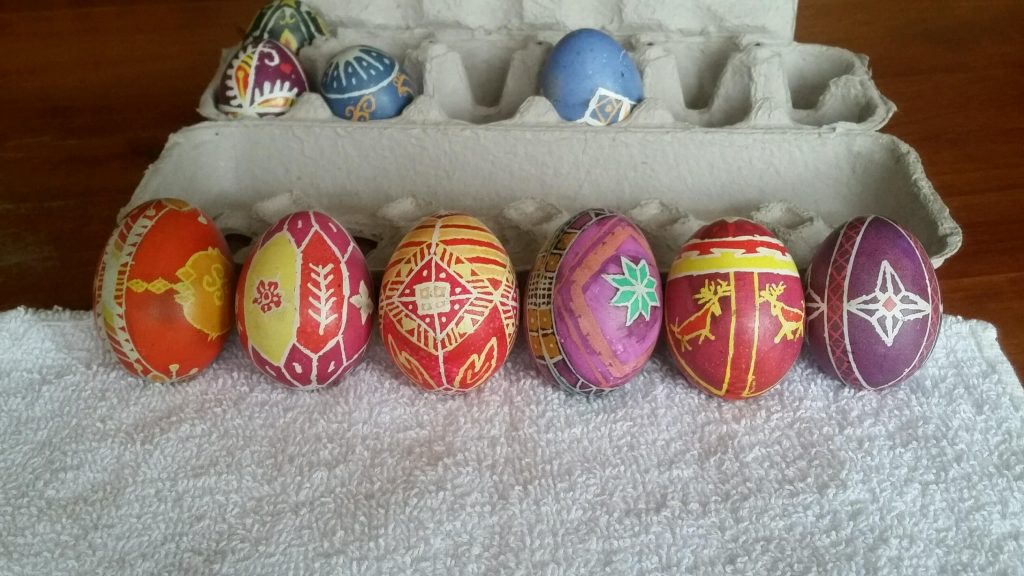 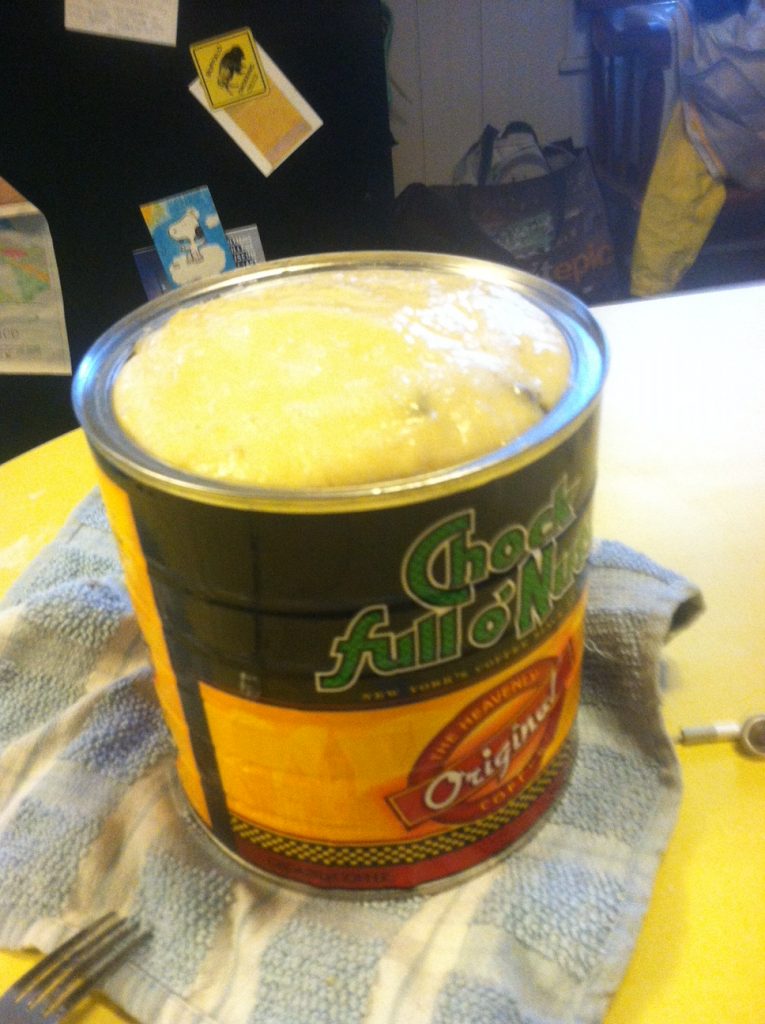 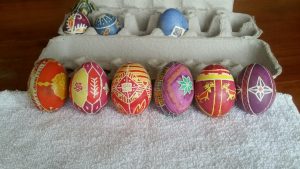 With the last of the snow (hopefully) behind us, many people across the Pioneer Valley are looking forward to celebrating religious holidays in the early Spring. I was not raised Christian Orthodox, but I often celebrated Easter with my family with Orthodox food and traditions from across Eastern Europe. My stepmom taught my brothers and I how to make Pysanky eggs —  Ukranian Easter eggs — by making patterns on the eggs with wax and then dying the eggs various colors to create intricate patterns. She learned how to make Pysanky eggs and Russian Easter cheese and sweet bread (Paskha and Kulich respectively) from her grandmother, who was a Russian immigrant. While we never celebrated in a church, many people across the Valley have similar traditions that have been passed down through the generations and are very closely tied to religious holidays. Even though the traditions vary, the early Spring holidays all seem to bring people together through food, remembrance, and the promise of spring.

“Food plays important roles in Jewish tradition,” said Rabbi Benjamin Weiner from the Jewish Community of Amherst. “More than any other holiday (Passover) is about how you eat.”

For many people, Passover begins this year at sundown on Friday, March 30, with a Passover seder. The seder, which many people celebrate the first two nights of Passover, is a ritualized meal where participants use food symbolically to tell the story of how the Israelites were liberated from slavery in ancient Egypt. The use of food symbols in this particular spring holiday is no coincidence.

“All Jewish holidays are essentially agricultural in origin. They’re all harvest holidays,” Weiner said. “(Passover) deliberately coincides with the earliest harvest and is linked thematically with things coming up that had been dormant.” 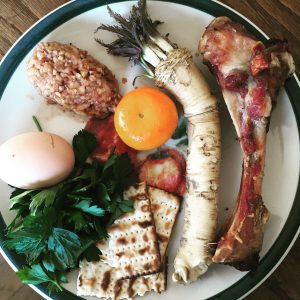 The Seder plate at a Seder meal last year at The Kitchen Garden Farm. Photo by Caroline Pam.

I was lucky enough to participate in a Seder last year with my friends at The Kitchen Garden Farm in Sunderland, where the symbolic connections between Jewish history and the rebirth of spring were on full display as the farm was just starting to produce food for the season.

“Now that I farm I have access to lots of local food,” said Lilly Israel, washroom manager at the farm. “Last year I brought horseradish from the farm to my family.”

Horseradish is one example of a bitter herb, which is always included on the Seder plate to symbolize the bitterness of slavery. There is also an item to symbolize the spring, usually a spring herb like parsley. Every item on the plate has a symbolic meaning. Charoset is a sweet mixture of fruits like apples, that is meant to evoke the mortar that the slaves used to build with, and then once eaten, the sweetness of freedom. A hard boiled egg symbolizes a festival sacrifice on the plate and a roasted lamb or goat shank bone is included in remembrance of when Passover was celebrated with a ritual sacrifice thousands of years ago (though Weiner said that as a vegetarian he uses a roast beet).

“We still carry the memories of the earlier days of the traditions with us,” said Weiner.

While many of the passover traditions have been passed on for thousands of years, there are also new traditions that people have adopted. For instance, it’s now common to include an orange on Seder plates to symbolize women’s rights and/or LGBTQ rights.

While the Seder uses food in a ritualistic way, for many people Passover is not a holiday associated with feasting because celebrating Passover involves abstaining from certain foods, most notably leavened bread. Leaven is what’s placed in bread dough and other baked products to make them rise. 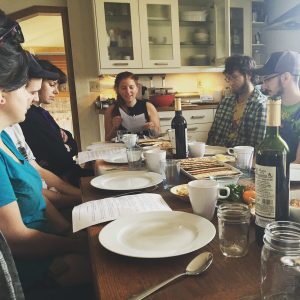 “It’s funny because Passover is kind of an anti-food holiday,” Israel said. Because her birthday falls at the end of April, she said that as a kid she was always worried that she wouldn’t get a birthday cake.

“At the heart of it is the rule from our Torah that the main rule of Passover is that you eat what our slave ancestors ate,” Weiner said. “So it’s a constant reminder of this piece of history.”

Isreal has celebrated Passover with her family her whole life and has some experience getting creative with matzo, or unleavened bread. Her favorite snack is what’s called the Hillel sandwich, charoset between two pieces of matzo. She also said that her mom taught her how to make matzo pizza and a melted cheese snack with munster, matzo, and cinnamon sugar.

“You can think about it, you can talk about it, but if you base your experience of remembrance in your habit then it’s in your guts,” Weiner said. “It’s not just in your mind but in your body.”

Even though the food restrictions during Passover can force creative cooking, Israel said that keeping up her family’s traditions is important to her.

“For me, Passover isn’t so much about the food as much as the traditions and gathering together to participate in the traditions,” Israel said.

Gathering together around food and traditions is something that most holidays share, including Orthodox Easter, which is celebrated on April 8 this year, a week after most Christians celebrate Easter on April 1.

“The whole point of it is to really simplify our lives. It’s a very holistic thing,” Peters said. “We’re simply trying to take the focus off of ourselves and onto God.”

The time and money saved during fasting are put towards prayer and almsgiving during lent. In addition to preparing for the coming feasts, Greek Orthodox families also participate in traditional activities, including egg dying. Greek Orthodox parishioners dye all of their hard boiled eggs red on Holy Thursday. As with many spring holidays, the egg symbolizes rebirth and fertility, but the Greek Orthodox use the color red to symbolize the blood of Christ on the day of the crucifiction. Pappas said that her family taps the eggs together on Easter weekend and whoever has the unbroken egg at the end of the game has good luck that year.

“Our culture and our faith are definitely intertwined,” Pappas said.

After midnight Mass on the Saturday before Easter, Greek families finally celebrate the end of lent with a feast.

“The most beautiful metaphor for the kingdom of heaven is a banquet,” said Peters.

Peters explained that the Greek Orthodox Church celebrates Christ as both the son of God and a man.

“As a result, everything is sanctified. The sky, the moon, the food,” said Peters.

“Some families roast a whole lamb on a spit outside,” Pappas said.

Peter’s explained that the lamb symbolizes the sacrifice of Christ as the lamb of God, but that it also calls back to the lamb used during Passover to mark the doors of Jewish houses to be passed over by the plague, something that Rabbi Weiner also mentioned as part of the symbolism of the lamb on the Seder plate.

Pappas’ parents were both Greek immigrants, and as the only daughter in the family, Pappas took on the role of cooking the traditional foods once her mother passed away.

“I was right there with my mother on holidays crushing the walnuts for baklava and preparing the food for the feast,” Pappas said. “My children have learned how to make the spinach pie and pistachio.”

Peters said that the time spent making the feasts are a time of fellowship for many families.

“A lot of these Easter foods are labor intensive and they bring families together in the kitchen for fellowship,” Peters said.

Peters mentioned that he’s the chef in his house, so I asked him for a recipe from his Easter cookbook that you can view here: Lebanese Holiday Rice

“As I mentioned, during the fasting seasons of the Church … we abstain from meat and dairy products. This recipe is very popular through the Middle East as a very delicious way to reincorporate those foods in the celebration of the Feast,” Peters said. 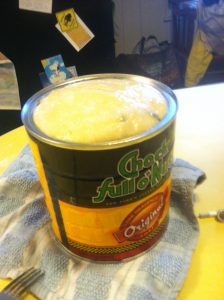 My first attempt at making Kulich, or Russian Easter bread, by myself. The bread is often made in a coffee can as shown. Photo by Meg Bantle.

My favorite Easter food has always been the Russian sweet Easter bread and cheese. The Kulich bread is like many other traditional sweet breads, but the Paskcha cheese is really special. It’s almost a cream cheese texture, but whipped with eggs and sugar. Even though my family didn’t celebrate Easter at church, the traditional recipes and activities (like Pysanky eggs) are still important to me because I spend time with my family while doing them. Many of the recipes that my stepmom, Tammy Bantle, taught us to make for Easter are complicated and time consuming, but learning how to make them with my family is an important part of the holiday (even though eating them was also pretty great).