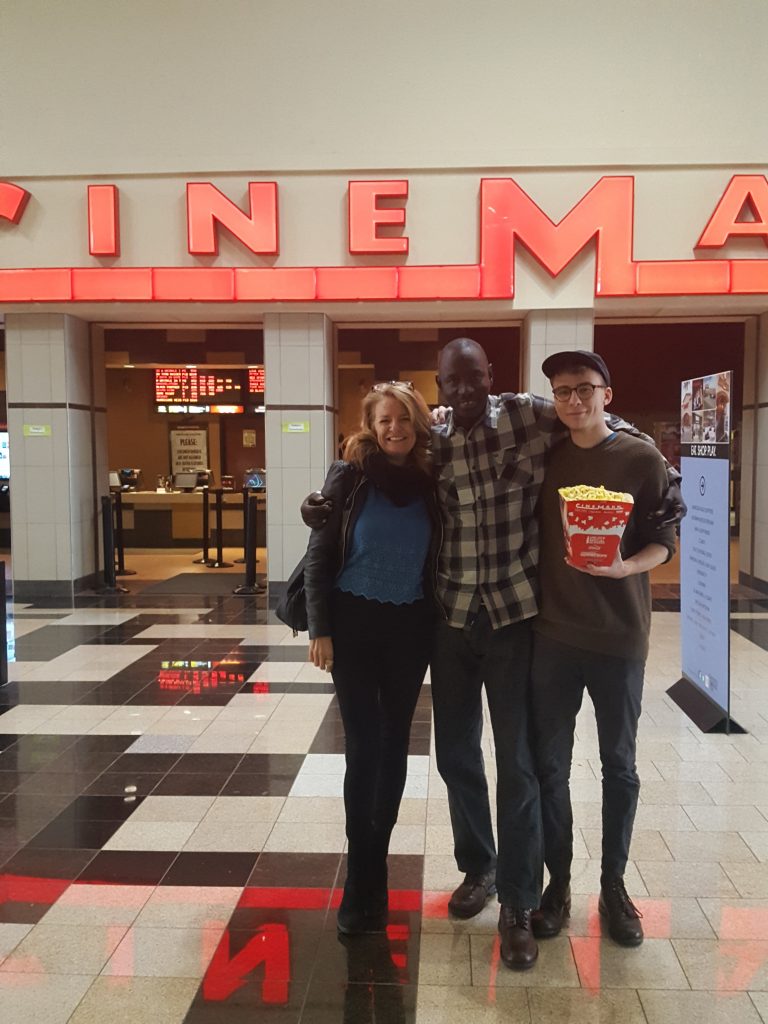 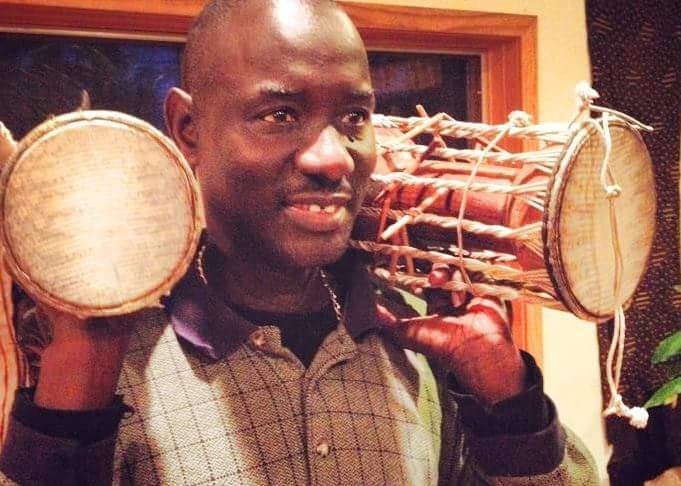 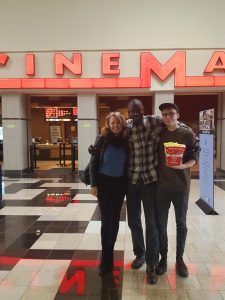 Massamba Diop getting ready to see “Black Panther” for the first time at the Hadley Cinemark at the Hampshire Mall. Photo by Meg Bantle.

Black Panther smashed global box office records when it opened in February, and like any good action movie part of the magic of Black Panther is the soundtrack. While watching the movie, there’s one part of the soundtrack that you might not notice at first: the tama, or the talking drums. The album written by Kendrick Lamar to accompany the movie got a lot of hype, but the music that really carries the action of the film is the talking drum beat that follows the lead character T’Challa, especially during fight scenes. The man behind those drums is Massamba Diop who came to the Hampshire Mall to see Black Panther for the first time.

“This movie is the biggest movie in the world,” Diop said. “I’m very happy.”

Diop explained that Ludwig Göransson, who did the music for the film, asked Diop to come in and play along to the film after seeing a video of him performing with Baaba Maal (one of Senegal’s most famous musicians) at Radio City Music Hall in New York City.

Diop has a connection to the Pioneer Valley through the Senegal-America Project that he runs with American percussionist Tony Vacca. The Project aims to bring people together from both countries around music to raise money for projects in Senegal, including a new school and mosquito nets.

Diop was in Hadley visiting a friend he met through the Project, Monique Hillen, and her son Cerek Hillen, both of Amherst to see the movie in full for the first time. Monique Hillen said that when he first told her that he was contributing to a movie, he couldn’t remember the name of it, saying that name of the movie was “Black something …” Imagine her surprise when she learned that her friend’s drums were being heard in cinemas all over the world.

“He said, we’re looking for you, we never thought we’d find an instrument like yours,” Diop said. “Your instrument is the bottom of the movie.”

Diop explained that Göransson was looking for music to follow T’Challa in fight scenes to underscore the action, but that he also wanted authentic African sounds due to the movie’s African setting in the fictional nation of Wakanda. 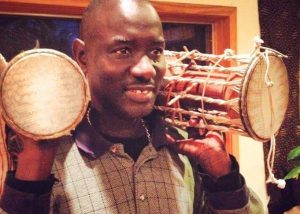 A photo of Massamba Diop with two drums. Courtesy of Monique Hillen.

“This drum was popular in Africa as a telephone,” Diop said. “A long time ago this instrument was used to send messages from village to village.”

“We call that family the dictionary of Africa,” Diop said.

Diop has been playing with Baaba Maal for decades and has shared the stage with many familiar names including James Brown, Peter Gabriel, and Carlos Santana.

“I can play with many different types of music and lots of different rhythms,” Diop said. “Afro-pop, blues, rock, and reggae.”

Most recently, in 2016, Diop and the rest of Baaba Maal collaborated with Mumford & Sons for a South African tour and mini Afro-pop album called Johannesburg.

“Everywhere I go people say, ‘Wow this is a new instrument!’ and I say no, this is a very old instrument,” Diop said, laughing.

After Göransson realized that Diop’s talking drum was the sound he wanted for the Black Panther soundtrack, he organized a two-and-a-half-week tour with Baaba Maal in Senegal where he met other musicians and made recordings for the film.

“I called five talking drums to play together,” Diop said. The sound of those five drums plus Diop’s drum is what you hear in clips like this that help build tension and anticipation when watching a fight scene.

Diop said that the most exciting part of contributing to Black Panther has been its worldwide success. He said that he hopes that this film will lead to other movie projects in the future.

Diop will be back in the Valley soon for a performance with Vacca at Gateway City Arts on April 28.