The Pioneer Valley Workers Center plans to hand deliver 1,000 letters from Western Massachusetts residents in support of Lucio Perez, an undocumented immigrant receiving sanctuary in Amherst, to the U.S. Immigration and Customs Enforcement (ICE) Office in Hartford on April 9.

During the April 2, Sanctuary in the Streets meeting at the Parlor Room in Northampton, organizers and volunteers with the Pioneer Valley Workers Center wrote letters in support of Perez, a father of four who entered sanctuary on Oct. 18, 2017 at First Congregational Church of Amherst. Perez has lived and worked in the United States for 19 years. 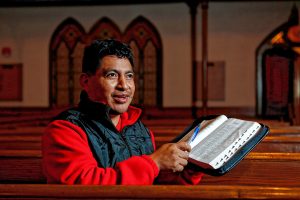 Lucio Perez of Springfield, an undocumented Guatemalan immigrant who is facing deportation, and currently in sanctuary in Amherst. File photo

Rose Bookbinder, lead organizer with the Pioneer Valley Workers Center, said a community relations liaison with ICE has reached out to the grassroots organization and stated that ICE is aware of the 1,000 letters for Lucio campaign.

Ian Petty, a volunteer with the workers center, told the Valley Advocate prior to the start of the meeting that thus far the organization has about 300 to 400 letters in support of Lucio.

He said the campaign was launched two weeks ago. Local area churches have been involved in drives to gain more letters for the campaign.

Bookbinder said the idea for the 1,000 letters for Lucio campaign came out of an Interfaith Sanctuary and Solidarity network across the Pioneer Valley.

Letters should be addressed, “Dear Immigration Officials,” include a copy of photo identification, list three things that the author appreciates about Perez, and also include a statement of support to approve the stay of removal and motion to reopen Perez’s case, according to a letters for Lucio campaign flyer. Letters can be emailed to lettersforlucio@gmail.com.

Churches providing sanctuary to undocumented immigrants also got attention recently through Springfield Mayor Domenic Sarno blasting the South Congregational Church in Springfield for offering sanctuary to a Peruvian family. The mayor went as far as to say the church should lose its tax-exempt status.

The meeting also included plans for the organization’s annual May Day actions, which includes a May 1 press conference with Northampton Mayor David Narkewicz at 5:30 p.m. at City Hall to topics related to workers and immigrants rights in the city.

Diana Sierra, a lead organizer with the workers center, said the Northampton Workers Rights Committee, an activist group comprised of immigrant workers as well as U.S. born workers, made a set of proposals to Narkewicz, one of which is for the May Day press conference.

“We want the city to make a commitment that it’s going to warn the community of an ICE raid, as was done in February in the city of Oakland, California,” she said. “We also want the mayor to publicly support the Safe Communities Act, which would make the state of Massachusetts a sanctuary state, so no more active interaction between police and ICE, and a list of other measures.”

Another topic that would be included for the May Day rally would be to support a $15 minimum wage for all workers, including teens.

Bookbinder said the Northampton May Day rally is set for May 1, while a rally in Springfield has yet to be finalized.