Can You Convince Monte Belmonte that Pinot Grigio is Good? 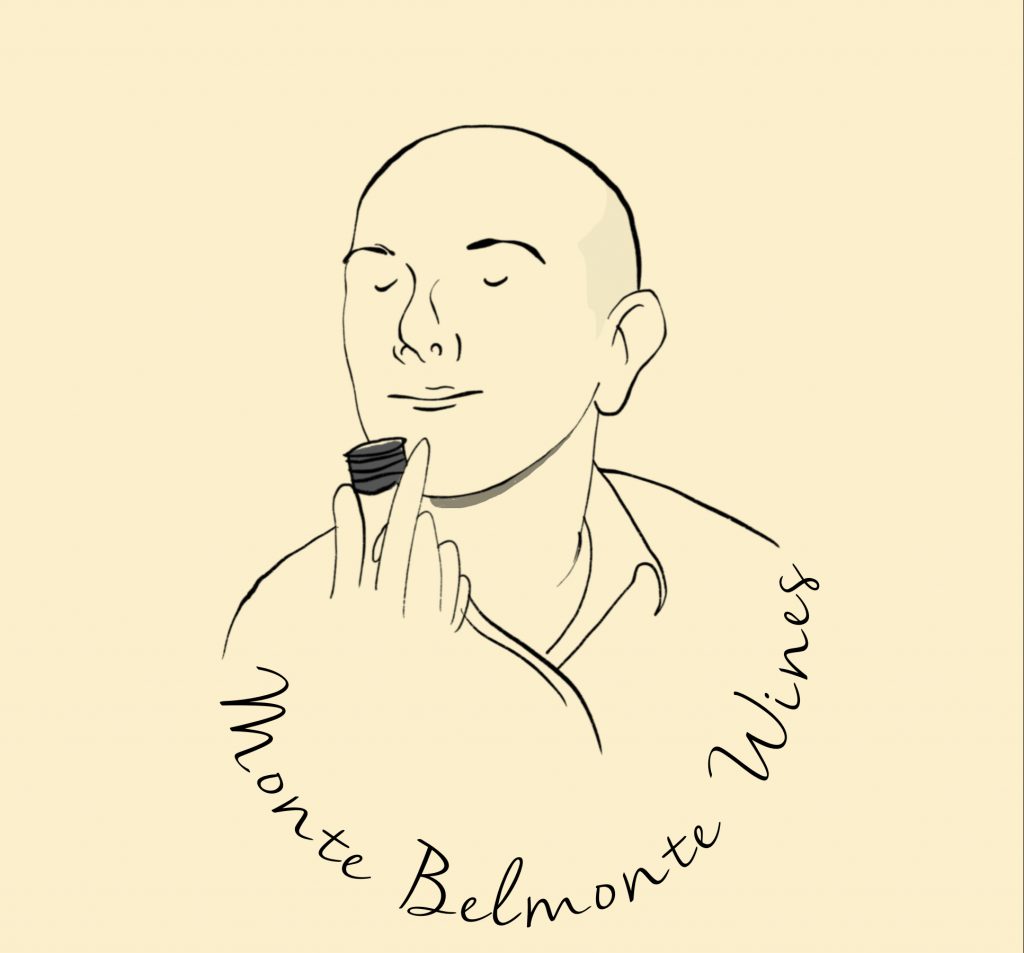 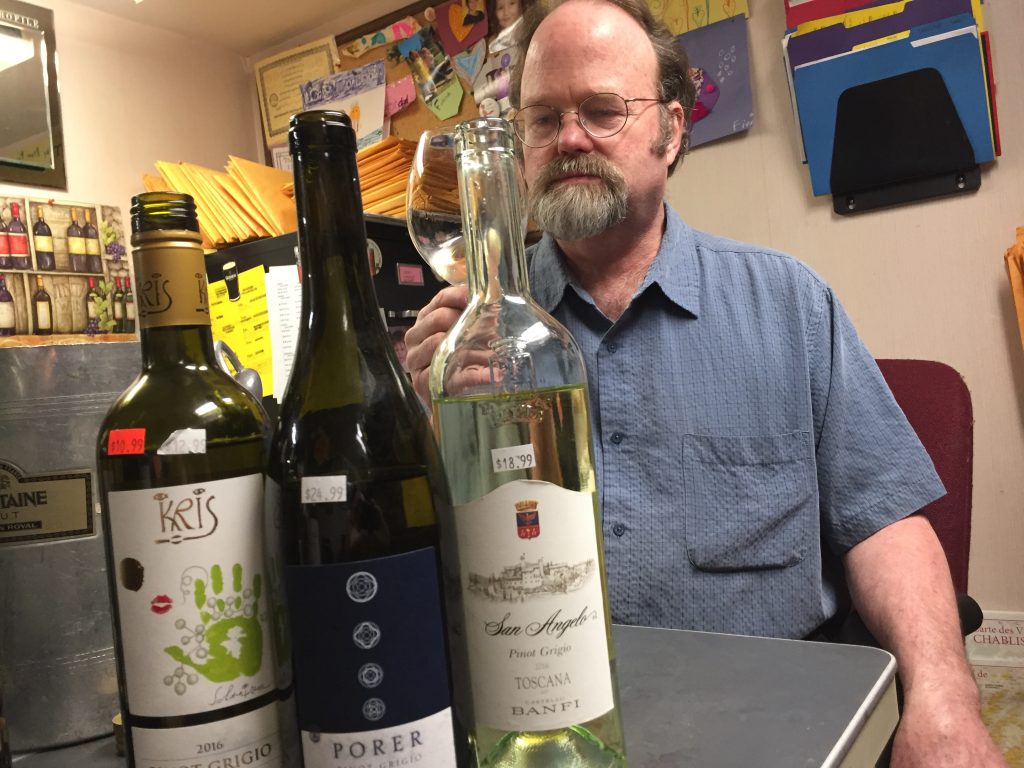 When I started down the road to wine snobbery, I was one of those people that said “I’m a red wine drinker. I don’t like white wine.” What a young, foolish, naive, wine drinker I was. I have since realized that there are great and interesting manifestations of virtually every type of wine grape. Emphasis on the “virtually.” Despite my best efforts, I have had a really hard time finding anything interesting about one particular grape — Pinot Grigio. 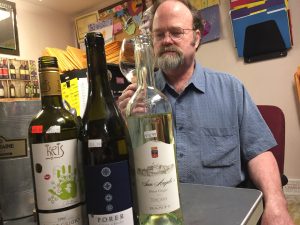 If you do a quick internet search about the most popular wine grape varietals in the U.S., you’ll see that I must be wrong. Americans are very interested in Pinot Grigio. Pinot Grigio either lands at the top spot or at second place, after Chardonnay, as the most beloved white wine grape for the American palette. I think Chardonnay is a great choice. It’s both easy to drink and very interesting. There is a strong argument that Chardonnay could actually be the most interesting white wine grape in the world. You may love the oaky, vanillin Chardonnays from California which I, by-and-large, DON’T. Or maybe you’ve begun to plumb the depths of Chardonnay from France and have lost yourself in the majesty of what French Chardonnay can be. Chablis. Mâconnais. Côte de Beaune. But I digress to the more uninspiring Pinot Grigio. As an Italian-American, it makes me feel a little ashamed of my heritage to be so openly unenthusiastic about Italy’s number one wine export to America. Pinot Grigio is also my beloved wife’s go-to grape. But, try as I might, I just can’t get into it. Even France’s identical twin, Pinot Gris, is boring.

Don’t get me wrong. Pinot Grigio is fine. As Larry David might say it’s “preeetty, preeetty, pretty good.” But that’s damning it with faint praise. Almost all of the Pinot Grigios I’ve ever had have been perfectly quaffable. Quaffable is the fancy wine snob way of damning a wine with faint praise. It means “drinkable.” Drinkability is the best word Bud Light could come up with while looking for a buzz word to market its abysmally boring self almost a decade ago. Does that make Pinot Grigio the Bud Light of the wine world? Normally, I’d say “no” to such nonsense. One grape, writ large, can’t in-and-of-itself be bad. Sure, every grape has bad expressions from bad makers or ill-suited climates. But is Pinot Grigio as a grape just plain boring? With most grapes, I’d say “impossible”. As a contrast, you might THINK you hate Sauvignon Blanc because all you’ve had is cheap Sauvignon Blanc from New Zealand. But have you tried a Sancerre? No? Then, you can’t say you don’t like Sauvignon Blanc. The problem with Pinot Grigio is, no matter how many I’ve tried at whatever price, it’s just… fine. Not bad. Perfectly quaffable. But not incredible. Not life-changing. Not even interesting. Just… fine.

I recently tried three Pinot Grigios at a variety of price ranges, in an experiment designed to convince myself that there might at least be SOMETHING interesting about Pinot Grigio. I understand that this is a completely non-scientific experiment. Three is an impossibly small sample size. But add these three to the countless unremarkable Pinot Grigios that I’ve quaffed as house-whites at restaurants, and in magnum size at office parties, and as the only half-decent thing your aunt has in the fridge at Easter. And, seeing as I was trying to find a Pinot Grigio that I could at least classify as “interesting,” I think you should let my experiment proceed.

I tried Pinot Grigios from across the price spectrum. The first was a big seller called Kris, from the part of Italy near Venice, Delle Venezie. It’s around $10-12. It’s very nice. Fruity. Some fresh grass. A hint of peanut brittle. That slight hint of peanut is my mnemonic device to know it’s probably Pinot Grigio when I’m blind tasting. Luckily, it will not trigger a nut allergy. I get this one for my wife a lot. The second was the Banfi San Angelo Pinot Grigio from Tuscany. It’s around $18.99. It had some hints of coconut, almost like a Piña Colada. It reminded me of my recent trip to Puerto Rico. But really, it just made we want an actual Piña Colada. And to be back in Puerto Rico. The third Pinot Grigio I tried was the Porer Pinot Grigio from Alois Lageder from the Alto Adige region of Italy. At $25, this was literally the most expensive Pinot Grigio they had at State Street in Northampton. Was it better than the $10 Kris? Yes. Better than the $19 San Angelo? Yes. It had more perfume on the nose and tasted of the kind of ripe peach you need to eat over a sink. It’s good. And I admit, it was more interesting than the other two Pinot Grigios. But if I were to buy the most expensive Chardonnay they had at State Street, I am almost positive I would have had a religious experience or have approached orgasm while drinking it. And the Porer was… quaffable.

Ultimately, I have come to the conclusion that Pinot Grigio is like John Mayer. Or perhaps John Mayer fronting The Dead. John Mayer is a skilled player who has written a few decent songs. He had a funny bit on Chappelle’s Show. And I get a lot of hate when I say things like this on my radio show: but I’m not a big fan of The Dead, either. The Grateful Dead have two really good albums. But it’s their live shows that made them famous. Maybe I’d “get it” if I ever had a chance to see Jerry in his prime or if I decided to sell a kidney for tickets to one of their recent vampire-just-won’t-die Dead reincarnation shows with John Mayer as lead unDead. But I just. Don’t. Get it. I know The Dead are beloved by their devoted fan base, who collect terribly recorded bootlegs from decades worth of their interminably long concerts. But almost nothing in the world could be less interesting to me, musically, than sitting through a Dead show. Or worse, a John Mayer and The Dead show. Talk about white whine. I’m positive that those John Mayer and The Dead shows are sonically “quaffable.” And I know that they sell out wherever they play. But like Pinot Grigio it’s just… fine.

I hope to be proven wrong. About the Pinot Grigio. I don’t want to hear any more about The Dead. Deadheads are also the biggest crybabies in all of music fandom. I once had a radio contest for John Mayer and The Dead tickets where I made listeners call in and “speak ill of The Dead” to win tickets. Winners talked about how much trauma that stunt caused them when they came to pick up the tickets. But convince me there is a legitimately interesting Pinot Grigio. Or let me know about any type of wine that you find interesting. For this column, I prefer talking to non-professional wine snobs. People who LOVE wine but aren’t involved professionally. Are you one of those people? @montebelmonte on Twitter.