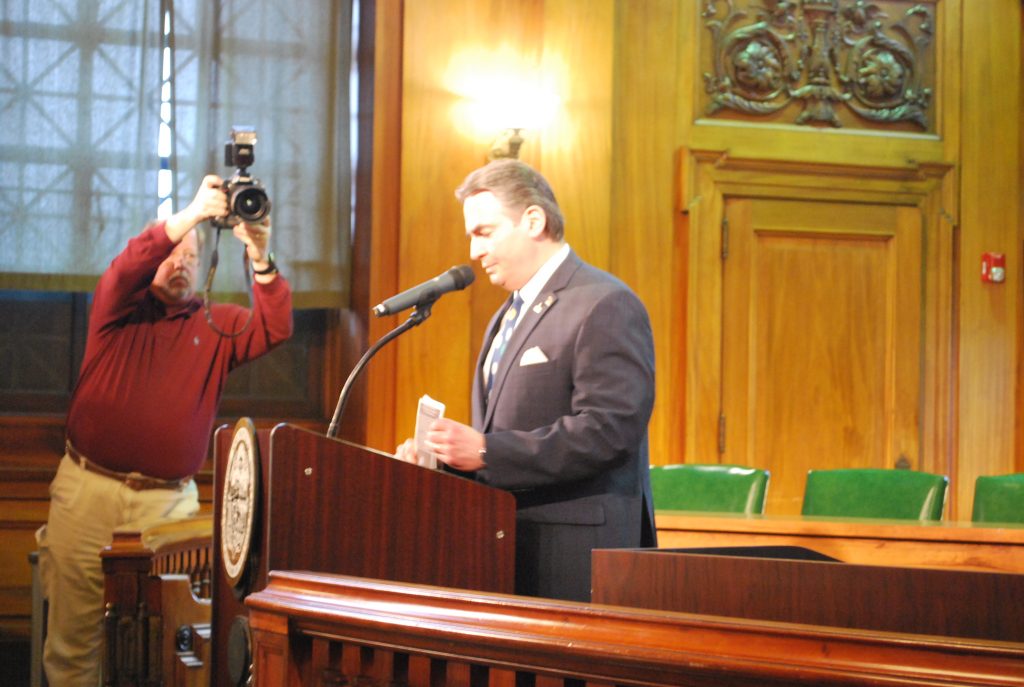 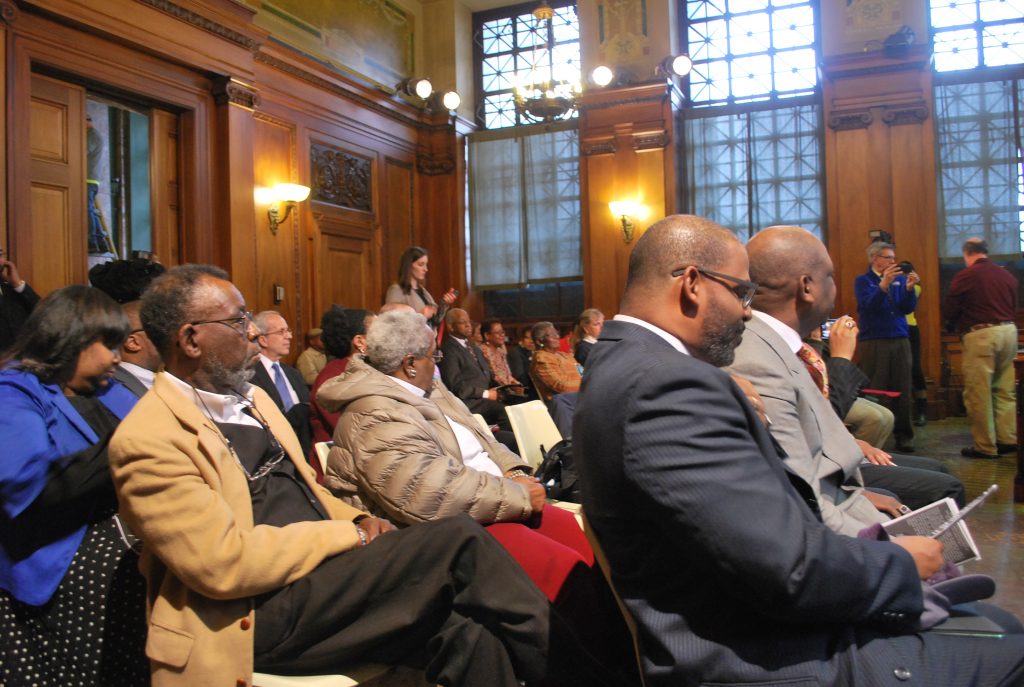 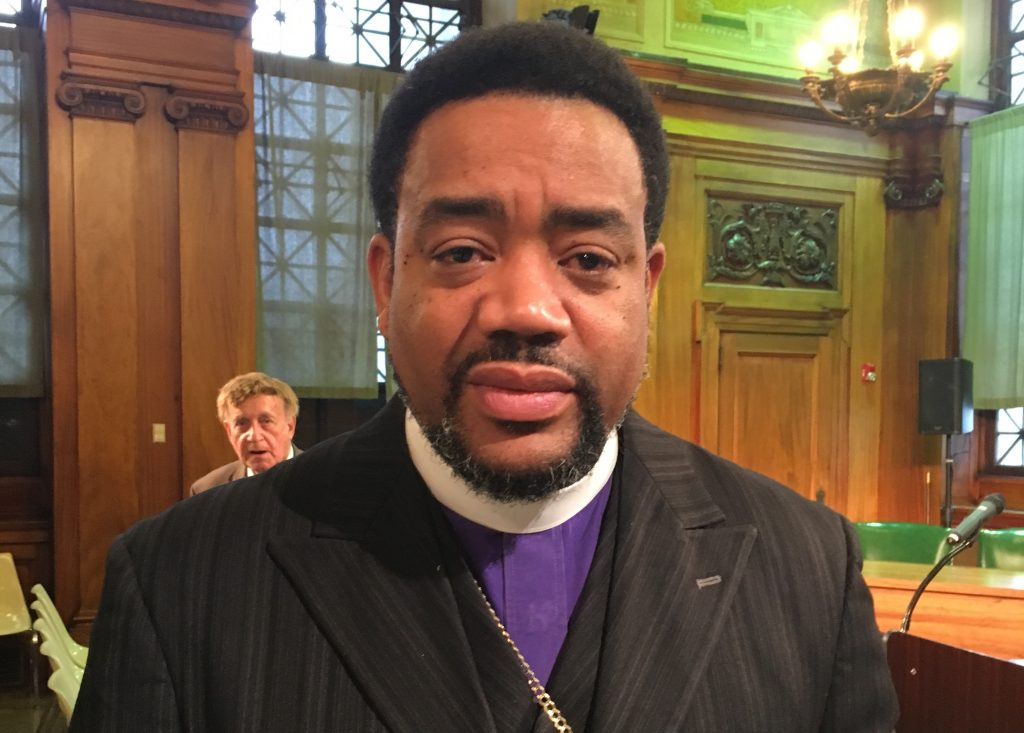 On a rainy Wednesday afternoon in Springfield, NAACP president Bishop Talbert Swan, Mayor Domenic Sarno, a host of interfaith clergy, and a roomful of citizens gathered to commemorate the 50th anniversary of Rev. Dr. Martin Luther King, Jr.’s April 3 “Mountaintop” speech and his assassination on April 4, 1968.

Bishop Swan, who organized the event in conjunction with the mayor’s office, said he couldn’t let the day go by without commemorating the civil rights icon. 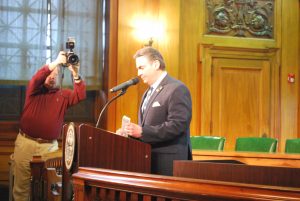 “I was scheduled to be in Memphis at the big celebration but that changed,” he explained. “I was going to be home and I just didn’t want to be here and nothing to be done in Springfield acknowledging and commemorating his Mountaintop speech and his assassination.”

The bishop called Mayor Sarno’s office and together they hosted the event held in the communications office at Springfield City Hall.

King’s death in Memphis, Tennessee, was a seminal moment in American history. Felled by a single gunshot from a Remington 760 Gamemaster, the civil rights icon’s death sparked violent outrage and national sorrow. Coupled with the speech he gave the day before, in which he said he might not live to see the end of the struggle, this 50th anniversary was commemorated by marches and ceremonies across the country.

As some in the media opined on how the relevance of King’s message of equality and social justice stands the test of time, others viewed the tragedy through the lens of the specter of gun violence. Following the powerful anti-gun violence crusade which culminated in the historic local and national March for Our Lives events, we are made mindful of the ongoing scourge of gun related assassinations throughout history.

However, the prevalent thread in the slate of speeches at the Springfield commemoration was violence as part of the intractable racial hatred in America, and the steep rise in hate language and corollary election of Donald Trump.

Almost every speaker lamented the xenophobic and racist sociopolitical climate that assails Americans daily, through media, hate crimes perpetrated by it citizens, and through words and actions of the president himself. They repeatedly touched on the historical and current normalization of violence in America; a violence that seems to have reached a fever pitch.

“I think it’s very important to be here today,” said Lujuana Hood, president of the Pan African Historical Museum of America in downtown Springfield. She and many in the audience vocally affirmed the comments of the speakers, for there was a clear recognition that the values Dr. King fought and died for are under constant and violent attack.

Reverend Jason Seymour of the Unitarian Universalist Society of Greater Springfield, reminded the audience of King’s question in light of the racial tensions of today. “Where are we to go from here? Chaos or community.”

One speaker, Reverend J.P. Morgan, Jr., posed the question:“Has the soul of America been redeemed as we sit on the precipice of an even greater abyss of yet unresolved, racial, political, and economic ruin.” He went on to ask what it would take for America to take committed actions against the slaughter of black youths.

“People are dying in the streets!”Johnnie Muhammad of The Nation of Islam’s Muhammad’s Mosque #13 stated passionately. Muhammad also recalled watching his mother and aunt cry at the funeral of Dr. King. 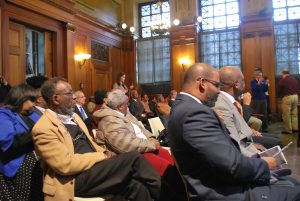 In his keynote address, organizer Bishop Swan further highlighted this uniquely American crisis. “Police violence in black America, of course, is nothing new,” he said, but now “every 28 hours an unarmed black man is murdered by a police officer.”

Swan spoke frankly about Trump era nationalism and bigotry. “There’s something nerve racking about a country that is getting browner and browner as the years go by. They [the president and his base] are giving full-throated voice to the prejudices of those who fear the erosion of white privilege in America.”

Swan went on the say that if King had lived, he’d be in his 90s, and that at the time he gave his Mountaintop speech he wouldn’t have dared to dream of the racial progress that has been made after his death.

But he went on to state, “there’s something Dr. King would find all too familiar: bigotry and backlash. Every wave of progress has seen in its wake currents of resistance, of anxiety and bitterness. Racial progress has promoted the greatest swells of indignation. Today, America is arguably more racially divided than it was in [King’s] day.”