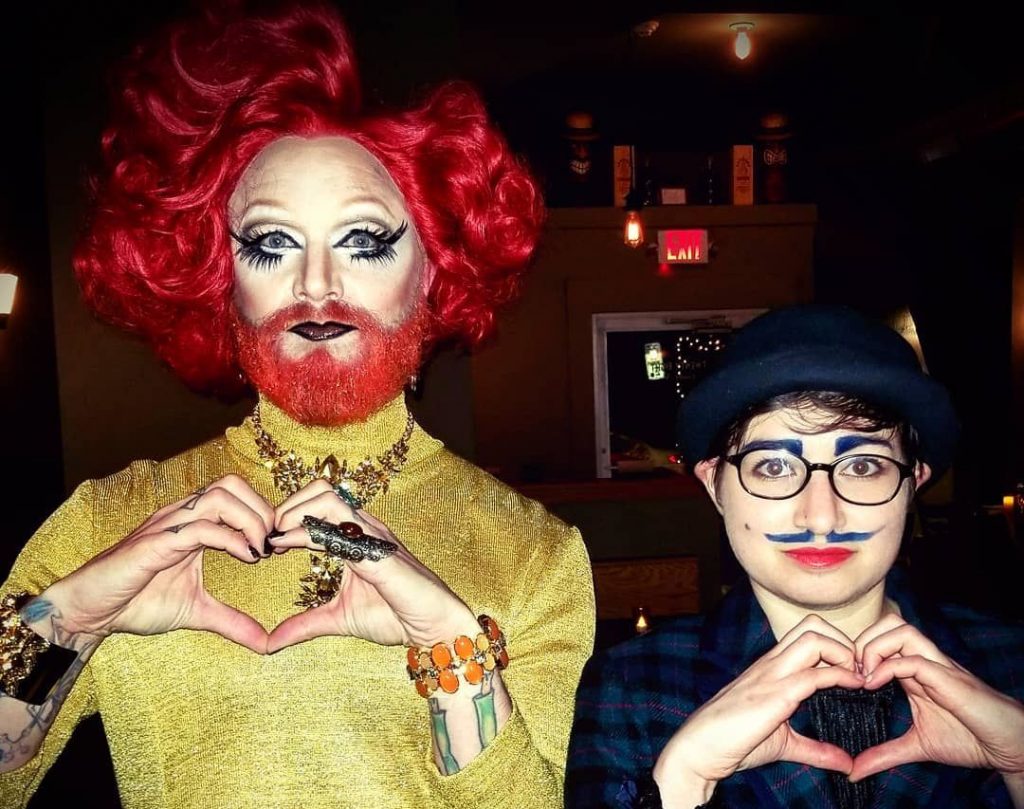 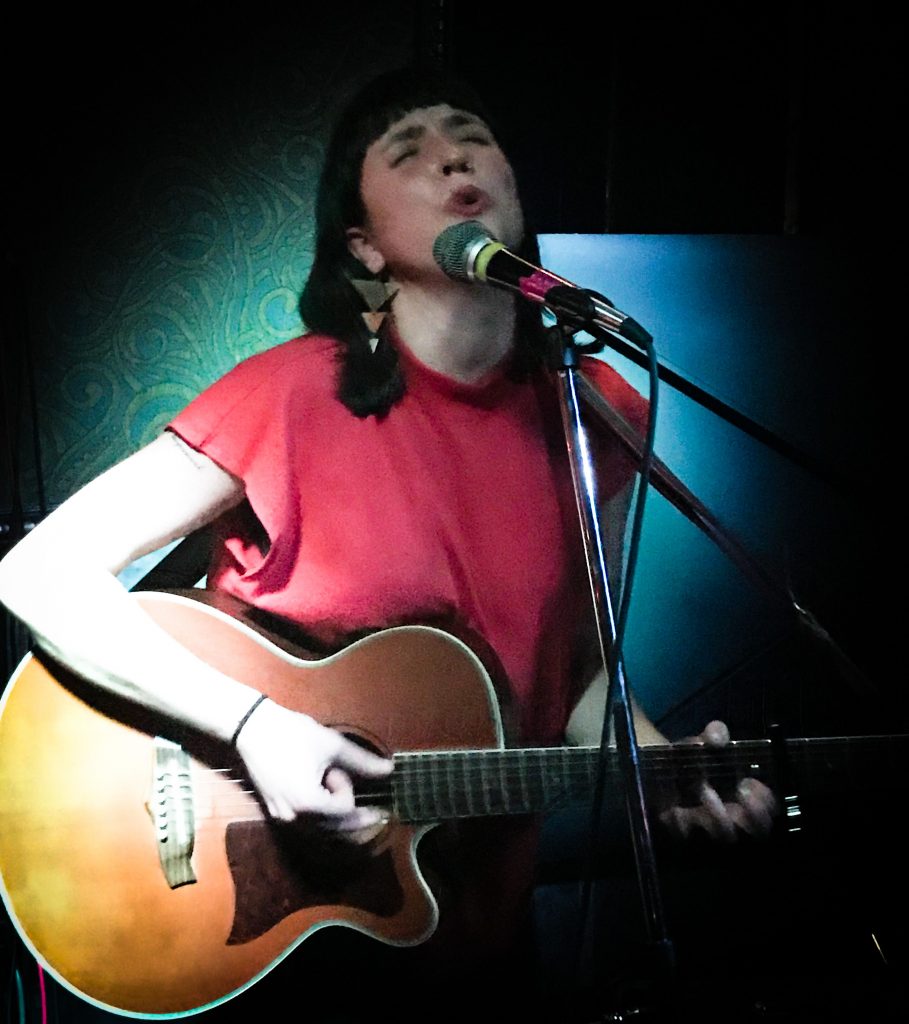 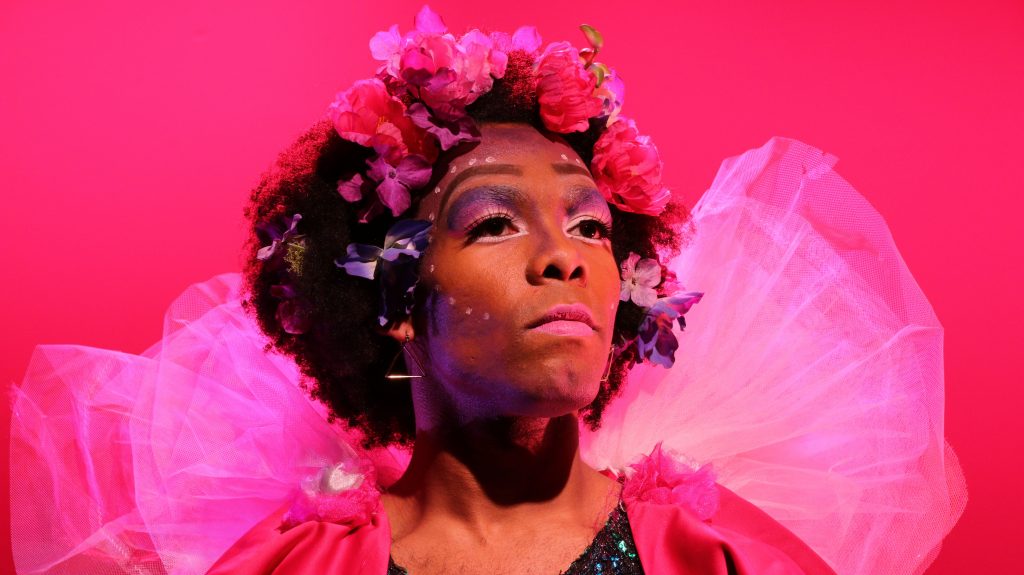 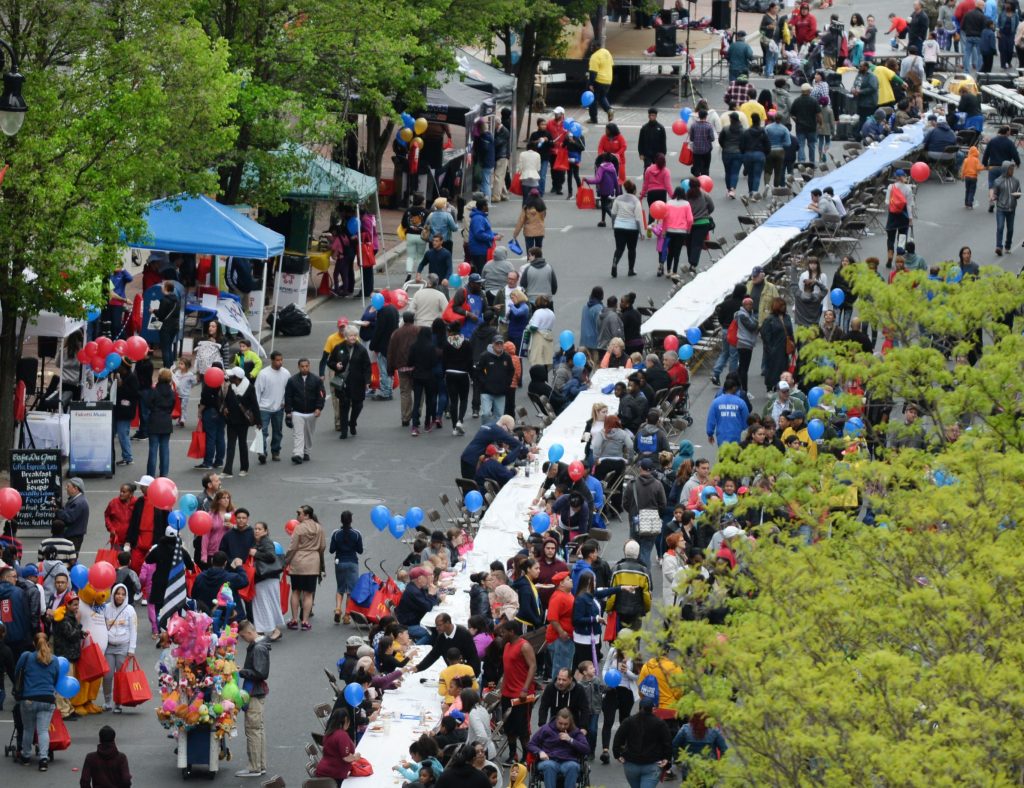 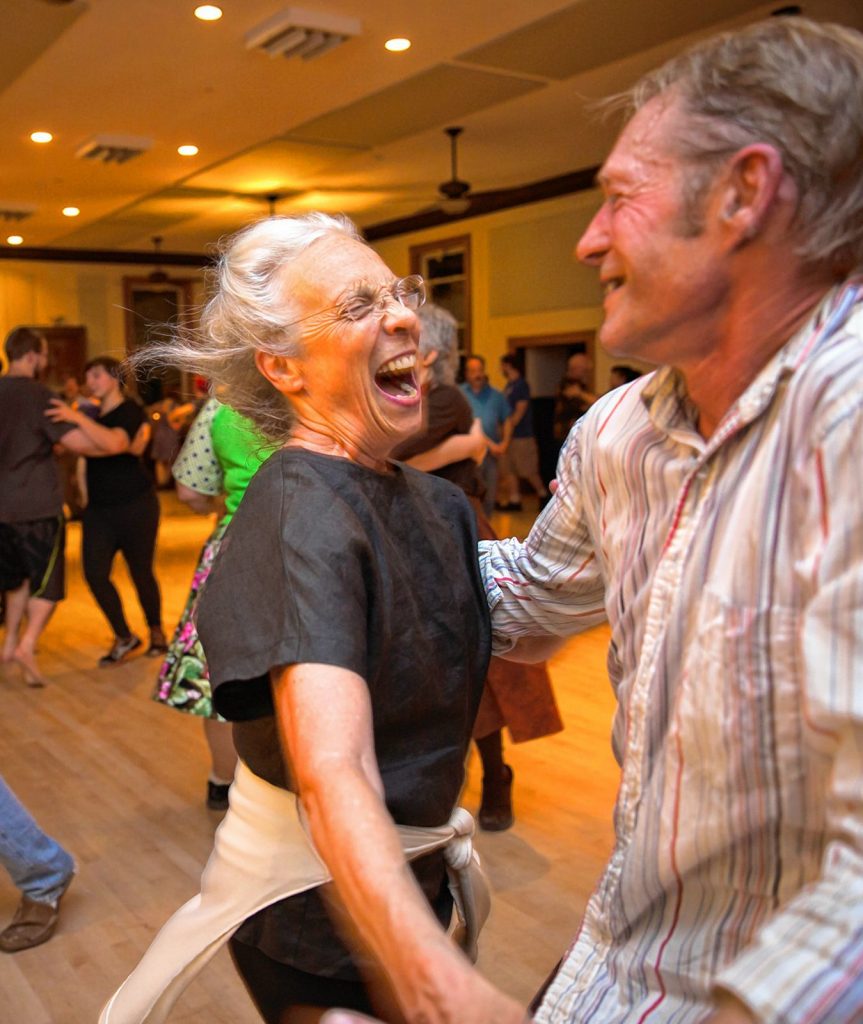 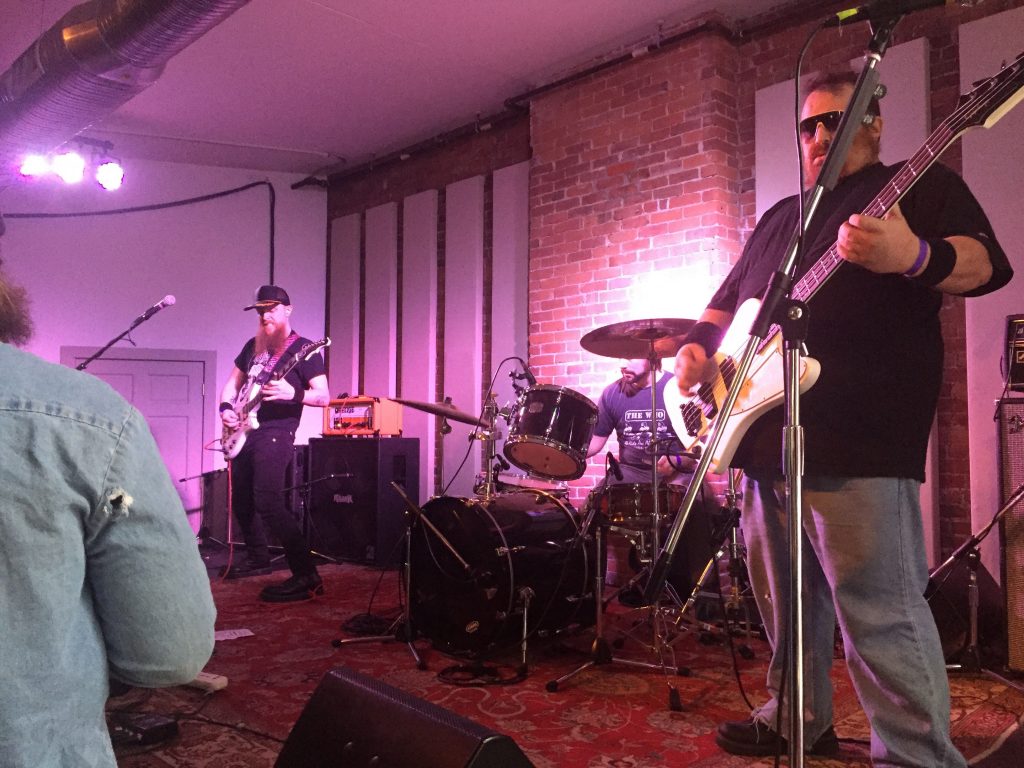 Problem with Dragons at the 2017 Stoned to Death. Jennifer Levesque photo. 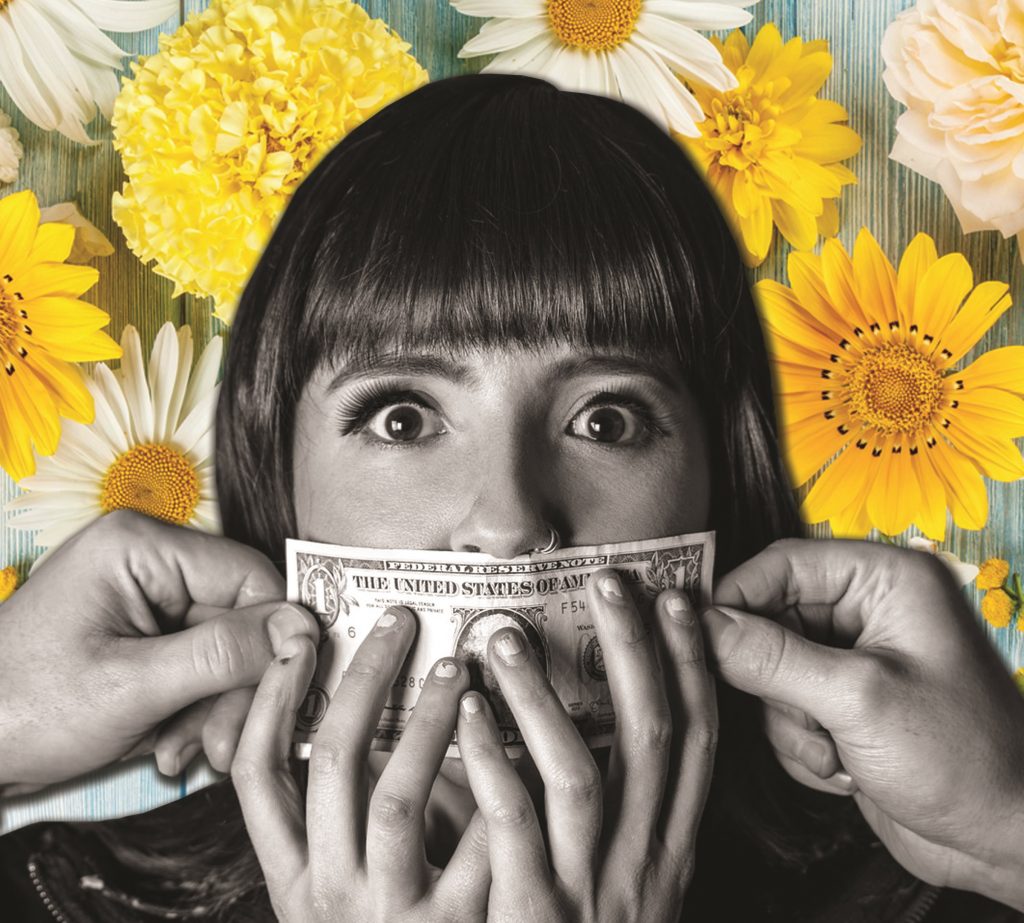 When spring blooms burst forth, you’ll want to rove the Pioneer Valley looking for fantastic things to see and do. We’ve pulled together some of the best events happening in the area April through June. 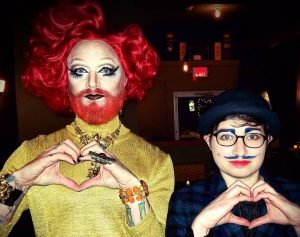 There’s a plethora of arts events happening across downtown Turners Falls during the Full Disclosure Festival on April 14, whether that’s poetry, visual art, song, dance, or theatre. There’s “The Pass,” a new performance work by Terry Jenoure for violin, voice, komungo (a traditional Korean stringed instrument), piano, and flute that combines dance and video. It’s an allegory about a canary disguising himself as a cat and will be shown at 8 p.m at the Shea Theater. At 4 p.m. at the Discovery Center is “from Walt, from me, to You” by Katherine Adler, which is an interpretation of Walt Whitman’s “Leaves of Grass” that promotes inward scrutiny and interpersonal empathy. You can also catch “Hauling Toward Home” at 6 p.m. at the Senior Center, a sound installation with rocking chairs. Turners Falls, 4 p.m. to 8 p.m.

The Flywheel in Easthampton is all about grassroots creativity. It’s a collectively run non-profit organization that wants artists to be artists. On Saturday, April 14, Flywheel will host the 7th annual Pioneer Valley Zine Fest, an event that will boast over 30 zine makers and distributors from New England and beyond. The cool thing about zines is that they’re accessible on all levels; they’re easily created with user-friendly materials — like (if you want to keep it really simple) paper, a pen, and a photocopier. Print 100 or more copies of your creation, and voila, you’ve got yourself a zine. Another cool thing: the Pioneer Valley Zine Fest is a place where creative people can get their zines distributed to folks like you and me. Some terrific magazines started out as zines. And who knows? You could spot the next big thing. 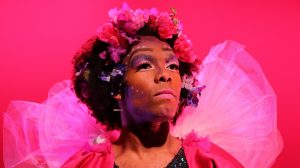 UMass Theater Department Public Relations Director Anna-Maria Goossens encourages audience members not to think about upcoming show The Lily’s Revenge as a play, but rather as a party or a wedding reception. Clocking in at about four hours, the five-part epic drag show extravaganza follows a flower’s desire to marry a human bride.

The play was written by Taylor Mac, who is a recipient of the MacArthur Fellows Program, known to us normals as the MacArthur Genius Grant. Look for a haiku battle among flower characters and amazing costumes, as well as the opportunity to move through multiple spaces in the Theater Department. Performances are on April 18, 20, 26, 27 at 6:30 p.m. and on April 21, 28, and 29 at 1 p.m. at The Curtain Theater. The April 27 performance is special because it is a Pride Night, where audience members are encouraged to dress to impress — bring rainbow gear and wigs! $15, $5 for students and seniors. http://www.umass.edu/theater/lily’s-revenge. 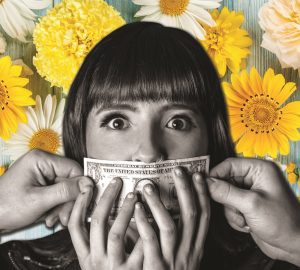 Go celebrate Earth Day weekend at Bishop’s Lounge with some of the greatest female artists and musicians in the Valley today. Nest Productions and PRIA Music Marketing host the event, which is the second in the Lilith of the Valley series. This month’s show includes The Mary Jane Jones, Old Flame, Lexi Weege and the Wondertwins, and Kimaya Diggs. The Mary Jane Jones is a group of musicians fronted by singer/songwriter Mandy Pachios that plays a mix of soul and jam music. Old Flame just released a new album called Hush Money that is sure to be highlighted at the show later this month. Born out of the Indie-rock scene in Amherst, Old Flame is characterized by gritty, lead vocals, bluesy basslines, and “psychedelic post-punk nostalgia.” Lexi Weege’s music is definitely driven by her unique and sure-footed voice. From bassy lows, to falsetto, to scatting, Lexi Weege brings it all. Kimaya Diggs is another vocal driven performer. Diggs can boast experience singing classical, jazz, and world music. She released her first solo album on April 8. 9 p.m. Bishop’s Lounge. 41 Strong Ave., Northampton. $5 at the door. 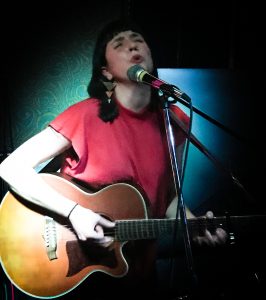 New England Public Radio is in the middle of their fourth season of Valley Voices and you can catch one of their shows next month at Gateway City Arts. What’s amazing about Valley Voices is that all of the stories are true, as told by the local people who lived them. You’ll be shocked at how your neighbors and friends can make you laugh and make you cry. Even just listening to these live stories (which you can do at nepr.net) is a lesson in the human condition, and the live show is all the more powerful. This show’s theme is Landline. If you miss the show on May 3, the last show of the season is on June 7. Gateway City Arts, 92 Race Street, Holyoke. Tickets are $10 in advance.

The behemoth block of mill buildings that rests on the corners of Main and Myrtle Streets in the East Springfield neighborhood of Indian Orchard houses some of the city’s best artistic talent. The Mills is a 300,000-square-foot arts and industrial complex dedicated to the growth of arts and industry. It’s scenic and it’s a glorious mix of artists and manufacturers. And on Friday, May 4, and Saturday, May 5, the Indian Orchard Mills Open Studios Art Show and Sale allows plebes like you and me to wander the warped, wide-planked wooden floors to discover the next piece for our private collections. Described as “our grandest event of the season,” the Open Studios boast the creative homes of 40 plus artists. It’s the perfect opportunity to meet artists, talk to them about their personal artistic processes and purchase original works directly from the hard-working creatives themselves. Friday, May 4, 6-10 p.m. and on Saturday, May 5, 12-4 p.m. Refreshments available. 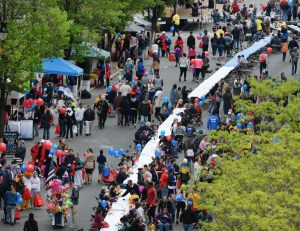 Yes, the culinary arts count! And it takes 3,450 pounds of buttermilk flour and 800 pounds of eggs to conjure up enough pancakes to feed an entire city and then some. But the Spirit of Springfield’s World’s Largest Pancake Breakfast volunteers make it happen every year. On Saturday, May 12, Main Street transforms into the world’s biggest breakfast table as hungry folks gather to celebrate the city’s founding on May 14, 1636. But it’s not just pancakes volunteer chefs are serving up; the menu also includes coffee, juice, milk, and… wait for it… 990 pounds of bacon! A load of good neighborly fun is also is the offing. Truly, it’s meeting new folks that makes the Pancake Breakfast such a great event. But there’s a bit of intrigue this year; in 2017 Russian flour exporter JSC MAKFA officially grabbed the world record with an eight-hour pancake making event that yielded 12,716 crepes, according to the Guinness Book of World Records. Judy Matt, president of Spirit of Springfield, says she is thinking of inviting Guinness to this year’s event to beat back the competitor. All we can say is: Batter up, Springfield! Tickets are $1 for children, $3 for adults. It’s all you can eat. 8-11 a.m. 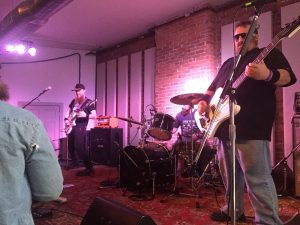 Problem with Dragons at the 2017 Stoned to Death. Jennifer Levesque photo.

Metalheads, rejoice! Promotorhead’s annual Stoned to Death one-day festival of stoner, death, and doom metal marks its third year at the Stone Church in Brattleboro, Vermont, on May 26. The lineup for the day includes Black Pyramid (psychedelic war metal from Western Mass), Desolate (black/death metal from Worcester), Benthic Realm (doom metal from Worcester), Easthampton-based imperial doom metal Problem With Dragons, Chained to the Bottom of the Ocean (sludge/doom metal from Springfield), and KiefCatcher (stoner metal from Burlington, Vermont). The metal-filled day starts at 2 p.m. in the former-church-turned-music-venue, and what’s more metal than listening to your favorite death metal band in a church? The Stone Church, 210 Main St., Brattleboro, 2 to 11 p.m. $10 advance. $15 door.

In the world of visual arts, it’s tough to top the Paradise City Arts Festival, which comes to Northampton on Memorial Day Weekend. For three days, the Three County Fairgrounds will burst with exhibitions from more than 200 craftspeople and fine artists. Check out the stonewear pots of Northampton potter Steve Theberge, who was inspired by ceramics he observed living in a monastery in Japan, or the color-saturated printed dresses of Boston-based designer Sandhya Garg, who was featured on Project Runway. Admission is $14 for adults, $12 for seniors, $8 for students, and kids 12 and under are free. More information at paradisecityarts.com.

5/27: Dance up the sun in Brattleboro 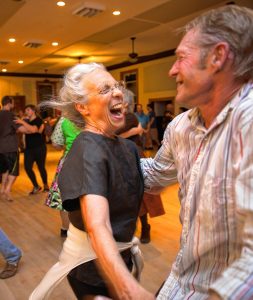 Why watch a dance performance when you can be a part of one — especially one that goes all night long? Twice a year in Brattleboro — the Sundays before Memorial Day and Labor Day — contra dancers flock to the Gibson-Aiken Center to literally dance through the night at the Dawn Dance. Starting at 8 p.m. on Sunday, May 27, live musicians and a caller (“swing yer partner!”) will play for a room full of enthusiastic dancers; and it all goes on until 7 a.m. the next morning.

Contra dance is a partner dance that has its roots in New England. While the form is 200 years old, it is constantly evolving, and people of all ages do it. No partner is required, nor is any special attire, though comfortable shoes are recommended as well as light clothes. You might work up a sweat! $25 for general admission. $20 for students and seniors. More information at www.dawndance.org.

2018 is the 13th season for the Berkshire International Film Festival or BIFFMA, which is easily one of the most highly anticipated cultural attractions of spring and summer in the Berkshires. The festival is housed at the historic Tripleplex Cinema in Great Barrington where viewers can watch films that address modern life in a classic, old-school movie theater, the Mahaiwe, and the Berkshire Museum. In addition to the movie screenings, the week-long festival also includes events like panel discussions with filmmakers and an opening night party. Every year the festival gives out two awards, the Juried Documentary category and the Audience Award Winner. Last year the winner of the Juried Documentary category was Nowhere to Hide directed by Zaradasht Ahmed, about a male nurse in central Iraq. The Audience Award Narrative Feature went to Patti Cake$, about an aspiring female rapper from New Jersey.