Down to Earth: Sugaring in a warmer world 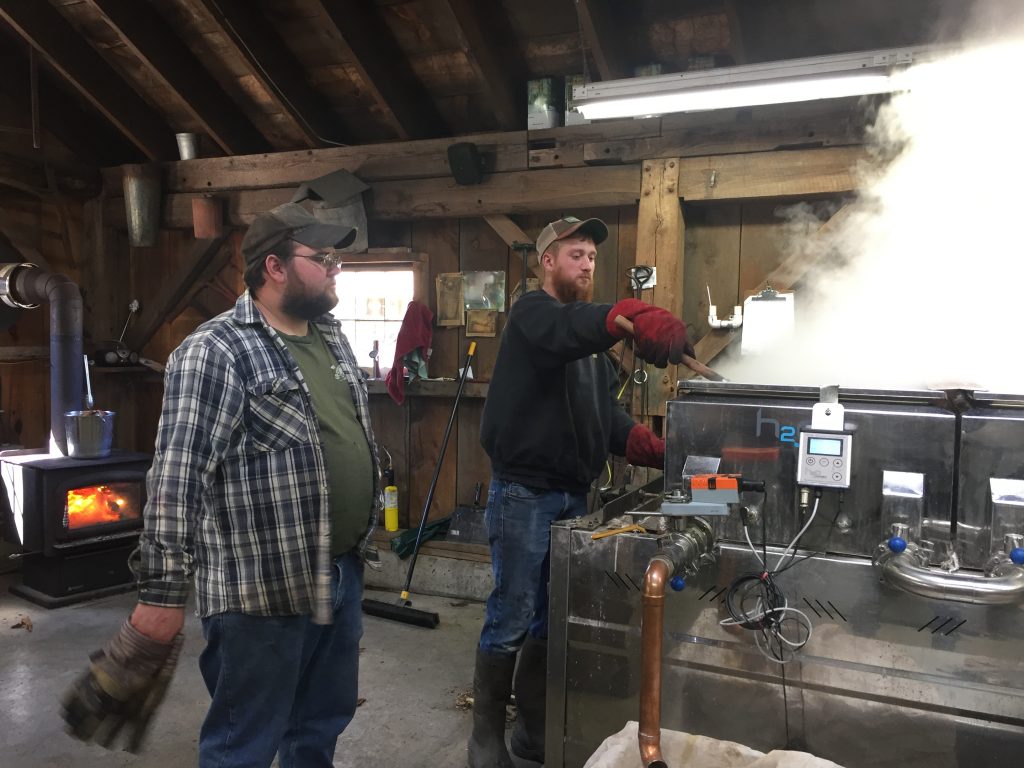 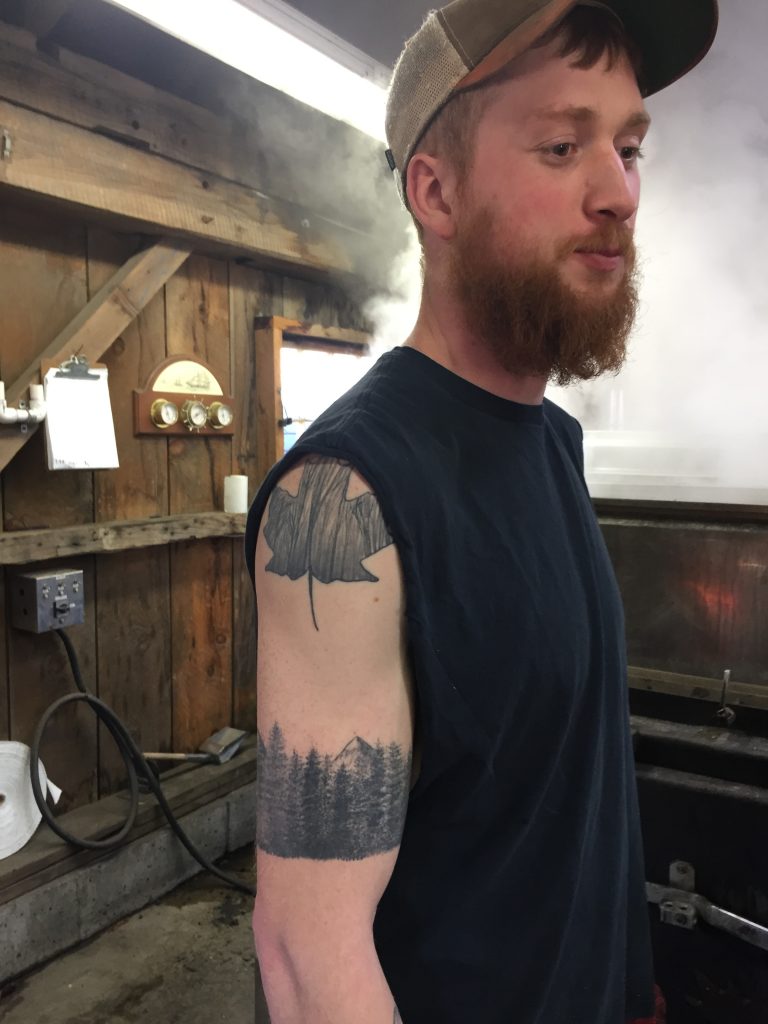 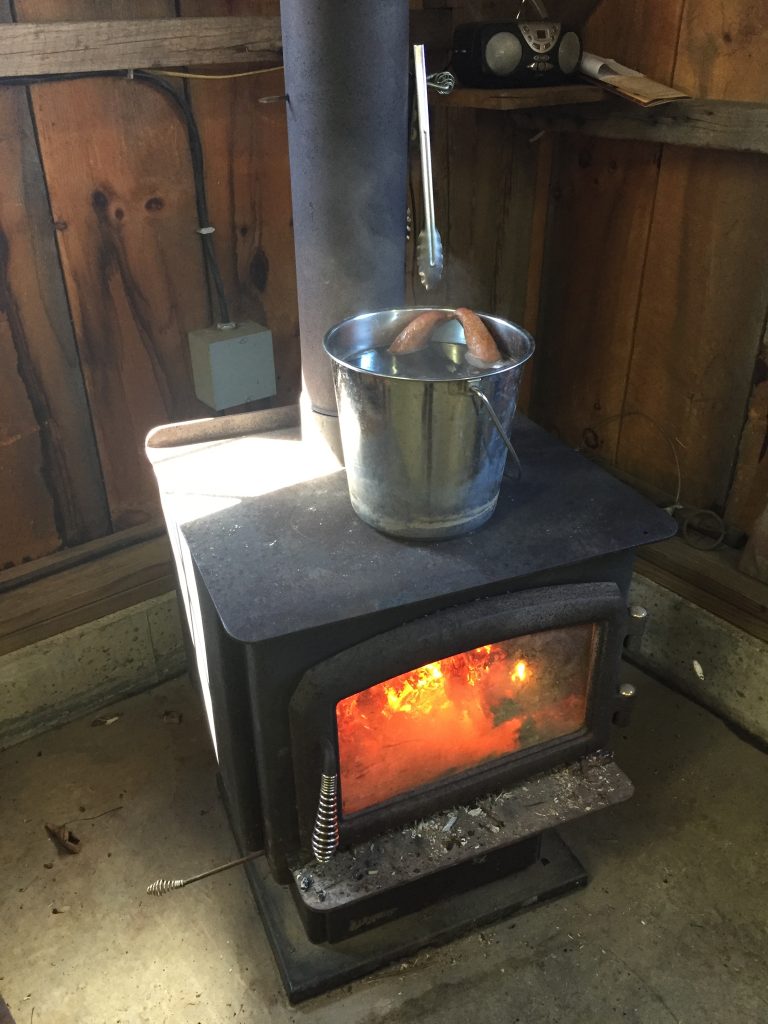 In the sugaring room of North Hadley Sugar Shack and Market on a recent Saturday, a trio of young farmers manned the massive wood-fired evaporator slowly boiling off water from maple sap. Mahogany-colored product rushed every couple minutes from the spigot. On a smaller corner woodstove, a kielbasa sausage bubbled for their lunch in a pail of sap.

I’d just ordered my breakfast of two eggs, bacon, home fries, and – of course – the crowning glory at the Sugar Shack: a buttermilk pancake to slather with the house’s own maple syrup. Since our treat would take some ten minutes to arrive, I’d jumped up to push open the big doors to the scene of creation of that sweet, sticky stuff.

I had my breakfast hat on, not my reporter hat. But that didn’t stop me from fretting about and asking how maple syrup production is faring in our region these days. 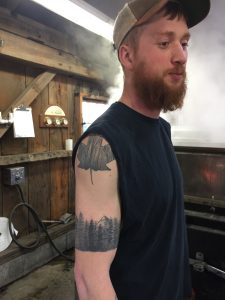 Tucker Telega Kendrick, who attends to all tapping, woods work, and line maintenance for the North Hadley Sugar Shack and Market, sports a maple leaf tattoo with an interior design of the farm’s Buckland woods. He is the nephew of the farm owners. Naila Moreira photo

The young farmer who answered my questions had a woodsman’s bushy red beard, a lean frame, and a maple leaf tattoo as big as my palm on one shoulder.

“Actually, our production is the highest it’s ever been at this point in the season,” he said.

The nephew of Sugar Shack owners Shelly and Joseph Boisvert, Tucker Telega Kendrick collects sap daily from the farm’s network of vacuum tubing on 4,000 maples. The farm also hangs old fashioned metal pails on another 1,000 trees. Together, the trees provide about 8 to 9,000 gallons of sap a day at the season’s height.

Kendrick does all the tapping, woods work, and line maintenance. That gives him a front-row view of their forests from year to year.

“The weather’s changing,” he noted. “You have to recognize and adapt to that.”

Climate change, of course, was the reason behind my questions. I wanted to know whether and how sap production is responding to increasingly early springs and warmer winter temperatures.

The Sugar Shack now starts tapping as early as January, Kendrick said. Their early start led to a yield last year of 2,300 gallons of syrup, their highest ever. Normally, the farm aims for 2,000 gallons a season.

“A lot of guys aren’t willing to adapt, they’re old school,” he said. “I know guys who start March 1. They’ll say, my grandfather started then, and that’s when I’m going to start. But it’s hard to make a living in this business.”

To learn more about how syrup producers and the maples themselves are affected by climate change, I called Pamela Templer, professor of biology at Boston University. 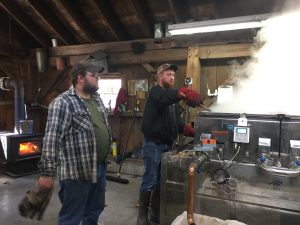 “As of now, in general, they can keep up with climate change because of their changing technology,” she said, such as the adoption of vacuum lines for sap collection instead of traditional buckets. “The real concern is the long term.”

Templer has conducted roundtable discussions with local community members, including representatives from the maple syrup, ski, and snowmobile industries. She plans to conduct similar discussions in the future funded by a new National Science Foundation grant for public engagement at the Harvard and Hubbard Brook Forests.

“There’s very strong agreement that they’re observing on the ground that snowpack is changing,” Templer said.

Not all community members at the roundtables agreed that humans cause climate change, she said. But none of them contest that the climate has shifted.

“To me, what was surprising was the unanimity. Anyone who deals with snow has said, ‘We are experiencing it. The mud season is getting longer, we can’t get our equipment out there.’”

Templer also runs experiments where she and her colleagues remove snow below trees during the winter. They then measure the trees’ reactions. 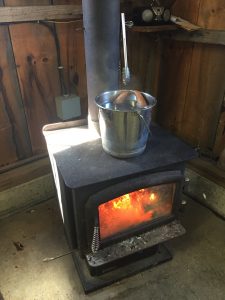 A kielbasa sausage bubbles for the sugar makers’ lunch in a pail of maple sap while they work the evaporator at the North Hadley Sugar Shack and Market. Naila Moreira photo

“Sugar maple appears especially sensitive to this. Their roots are very close to the surface,” Templer said. The roots die back, and while they normally recover by the end of summer, the trees’ growth appears to slow, she said.

In her experiments, Templer found increased nitrogen release from soils without snowpack.

Weaker trees are also less able to remove carbon dioxide from the atmosphere and convert it into leaves, making them less able to mitigate climate change, studies have found.

While maple syrup producers are doing fine for now, many Templer has talked with do worry “what’s going to happen to their industry when the conditions they need for maple production aren’t there anymore.”

At the Sugar Shack, maple syrup and related products account for up to 70 percent of the farm’s income, said owner Shelly Boisvert. “What our whole business is centered around is the maple,” she said.

The farm switched to vacuum tube technology about ten years ago, which boosted production, as has the opportunity to tap trees earlier.

However, “on the other end, it seems to be warming up earlier. If we don’t get those first few runs in, we won’t get our production,” she said.

Maple sap begins rising during warm days after the depths of winter. When nights are below freezing and days are around 45 degrees Fahrenheit, changes in pressure inside the tree cause its fluids to flow, enabling stored nutrients to move through the maple.

The farm’s Ashfield and Buckland woods, being farther north and higher altitude, tend to be cooler than the forests nearer Hadley, Boisvert said. For now, those cooler temperatures have allowed the farm to continue production later into the season.

For Kendrick, whose maple leaf tattoo sports an interior design of the Buckland forest, the main problems he faces are still in the day to day.

As I sipped at a sample of syrup in a paper cup, poured from a coffee urn in the corner, he spoke to a large group of visitors who had come in to listen.

“We’re out there daily working. Squirrels, deer, coyotes, porcupines, bears, they all seem to want to chew on our lines,” he said.

The early start, he added, “makes for a lot more hard work. But we’re going to produce more since we tapped earlier.”

After breakfast, I stepped outdoors. A cloud wafted down from the chimney, blanketing me in maple scent. The parking lot was full. One of the wait staff shouted waitlist names from the door.

May the maple seasons never end.