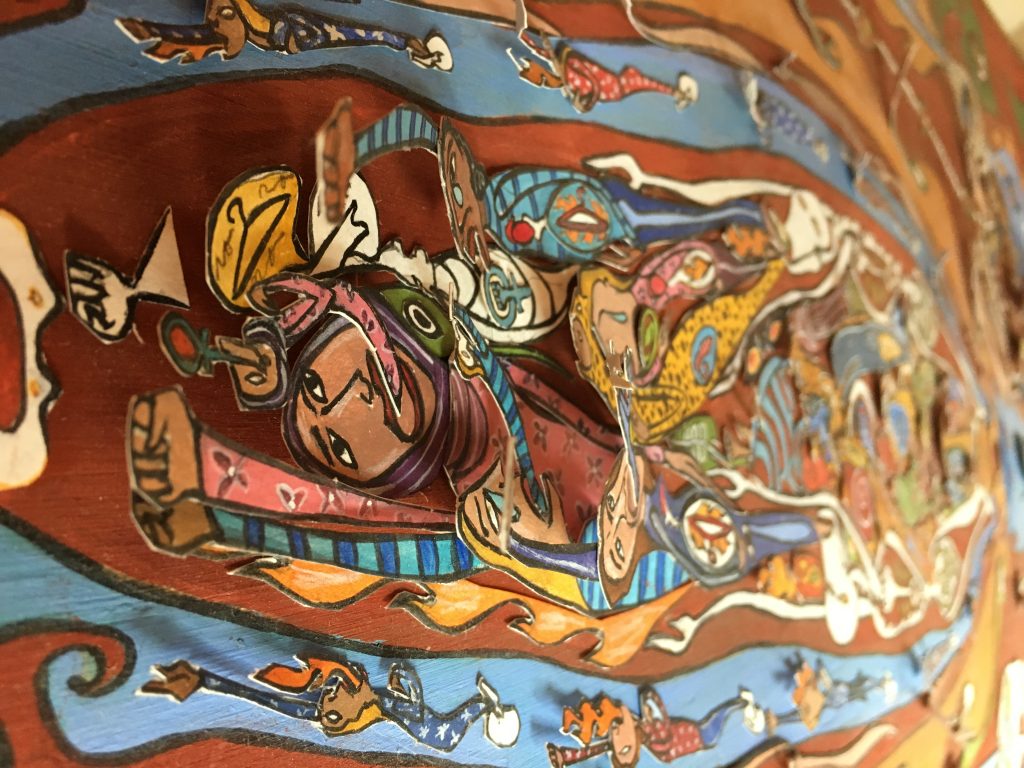 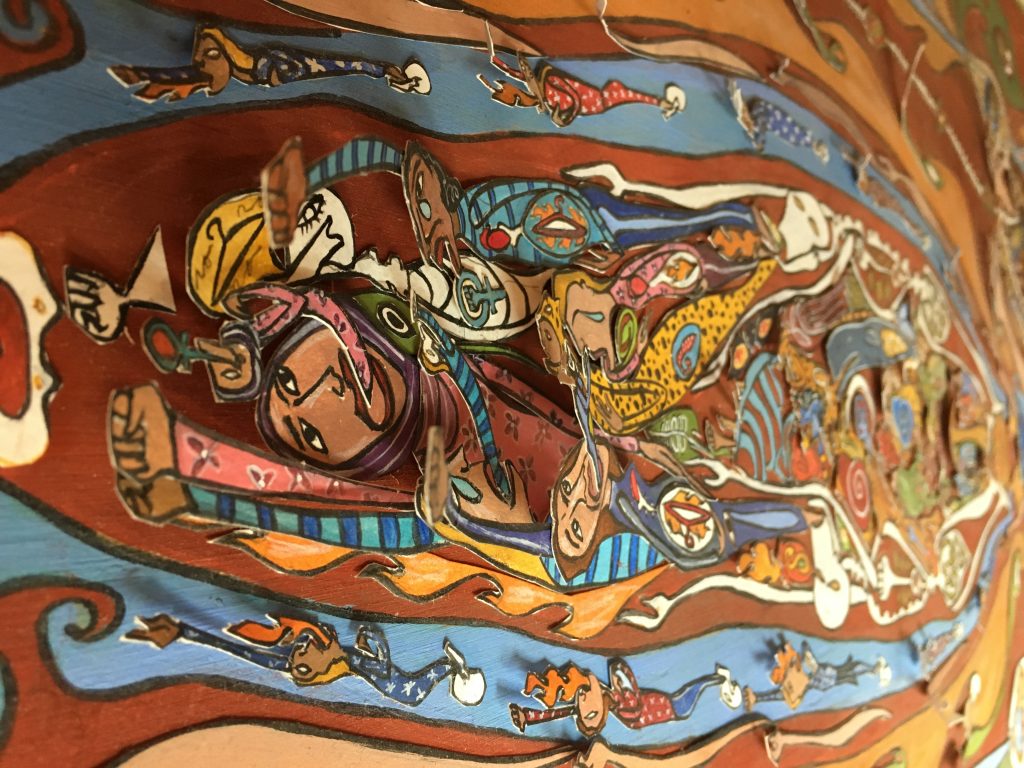 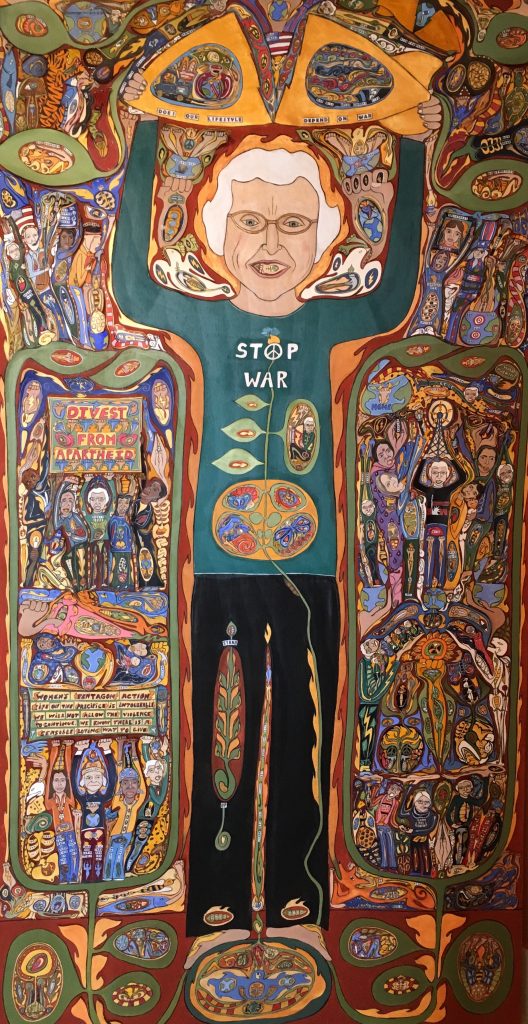 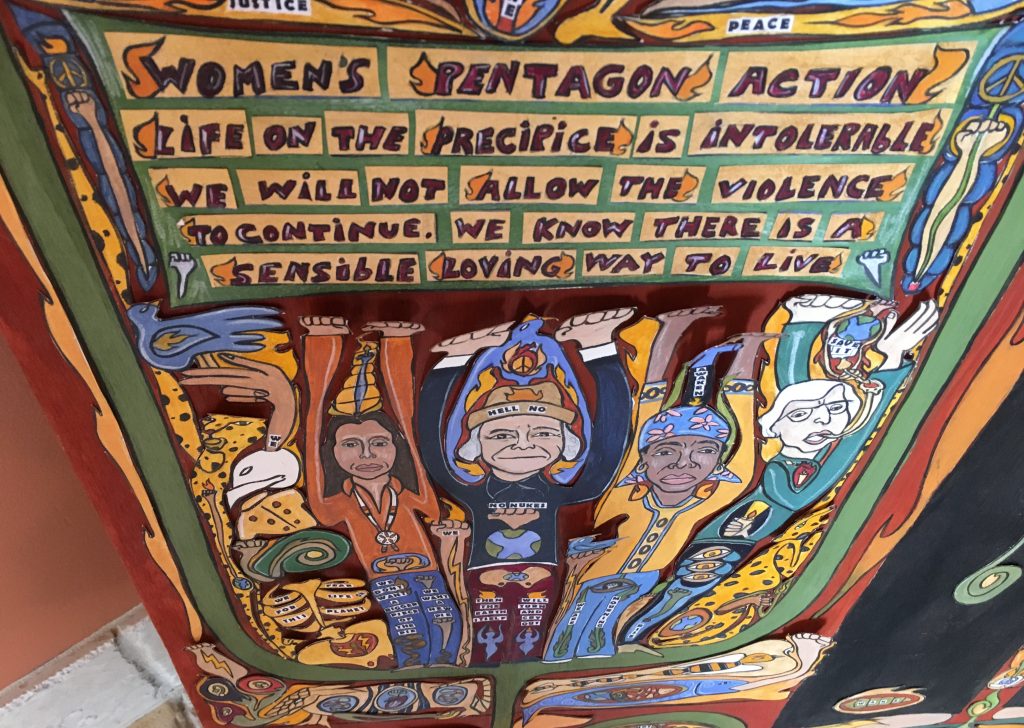 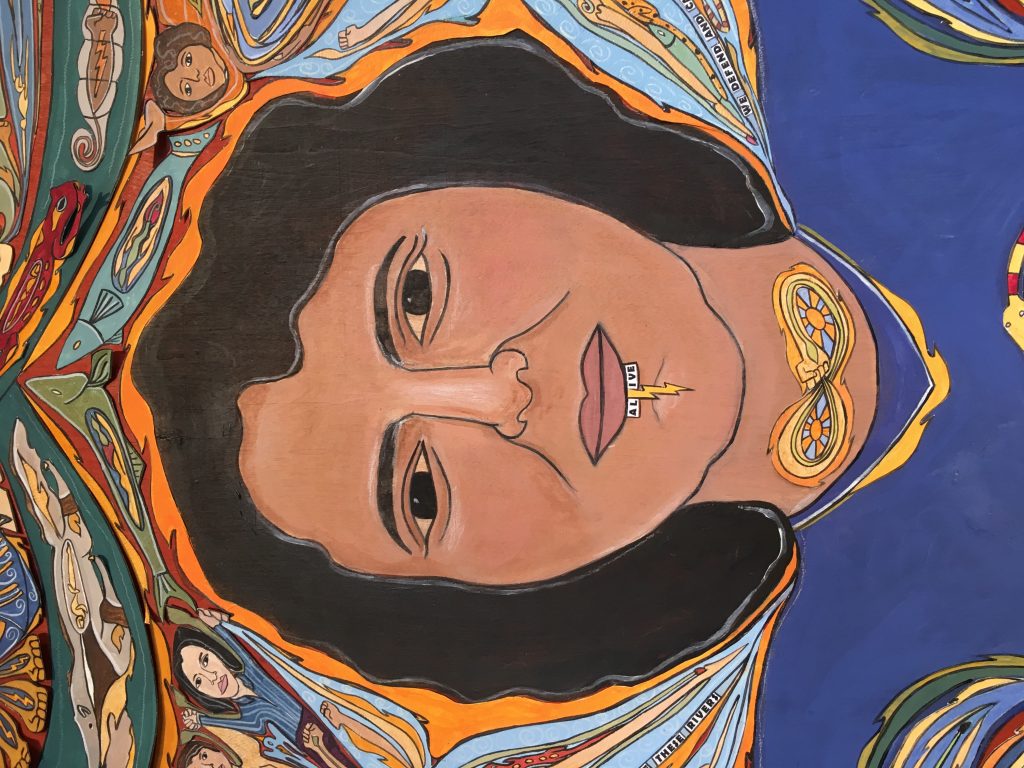 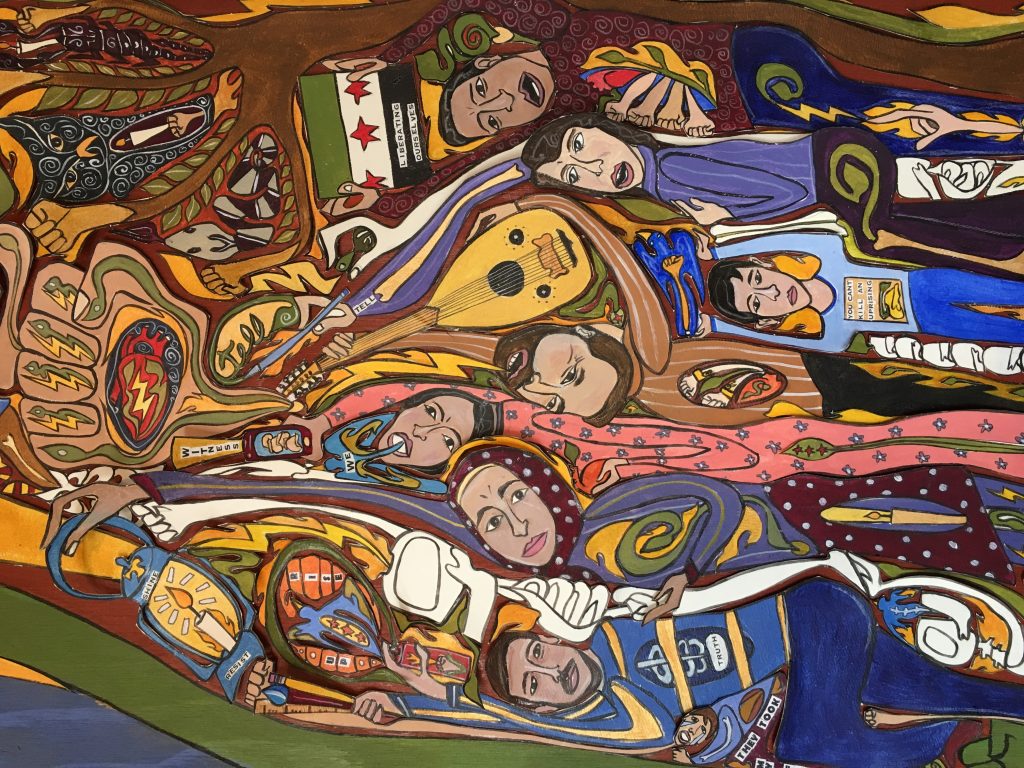 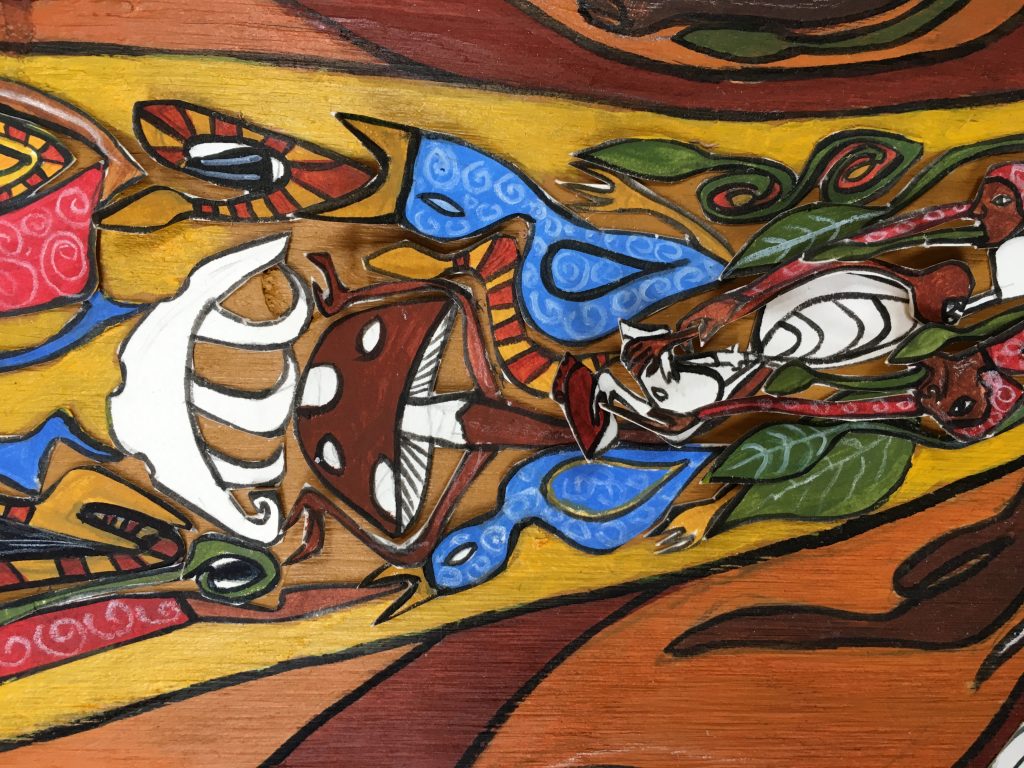 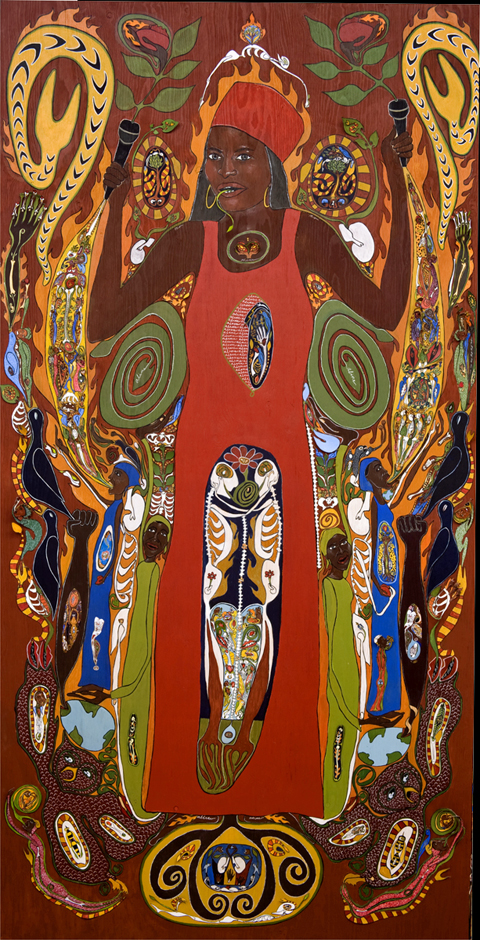 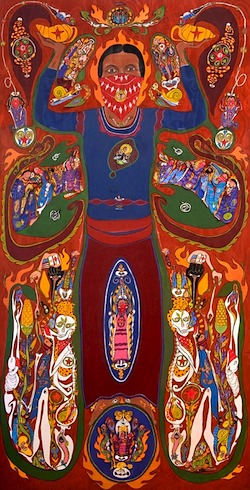 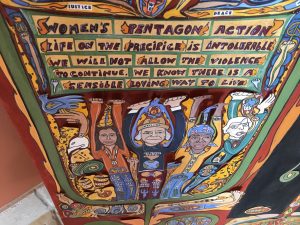 Going into Denise Beaudet’s exhibit Roots to Resistance at the New England Visionary Artists Museum, requires a bit of preparation. Beaudet, after all, has amassed a master’s course in global female activism.

In her bountiful literature, her writings concerning the process, and her descriptions of her subjects, Beaudet has produced an unforgettable set of images. New England Visionary Artists Museum is in the Anchor House of Artists in Northampton. “Let the artist speak” is the motto for the museum, and Denise Beaudet is speaking loud and clear.

“Roots To Resistance is a project focused on 12 women activists doing profoundly important Justice work on this Planet.” That is the way Beaudet describes her show. Roots began with the 2009 death of human rights journalist Natalia Estemirova in Chechnya. 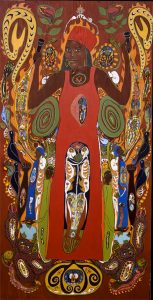 Estemirova’s murder deeply affected Beaudet. “It is certain that the seeds of the Roots To Resistance project were planted with that first news story. That was the summer that I learned about Natalia Estemirova.”

Beaudet embarked on painting Estemirova’s portrait; then she and a group of friends undertook the process of choosing 11 other worthy women who, like Estemirova, speak out at great risk to themselves. When it was said and done, it took Beaudet nine years to complete the journey.

Upon entering the museum, the fruits of Beaudet’s labors are larger than life. Beautifully painted boards of wood are propped against the walls of the museum. There are no hanging mechanisms, which makes them seem even more grand.  The wooden boards are relatively thin and measure eight feet high and four feet wide. As for their surfaces, not one inch is left uncovered. 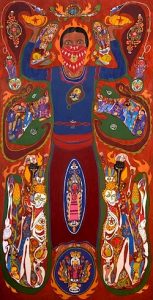 Beaudet’s earthy colors of terracotta, gold, orange, green, and blue (accented with a host of vibrant colors) give these pieces even more weight and heft. That each woman’s feet straddle a stylized orb makes the feeling of being grounded even greater yet. The Earth is apparently something Beaudet treasures, and in her statement she explains, “I spend a great deal of time in the woods and mountains, hiking everyday … and thus, the natural world has become my greatest muse and partner.”

Beaudet’s works seem the result of a restless, almost manic attention to detail. You can feel the fervor of her mission; her attempts to give voice to these women. It’s as if the portraits are humming with energy.  And unless you see Beaudet’s works in person, you cannot appreciate the intricacies of her process. Rendered three-dimensional through her meticulously cut paper collage work, parts of the works literally reach out to the viewer. In some areas, her designs are so dense, each section of a painting is a complete painting unto itself.

Her works also possess ancient archetypes that unify our vast world and make life on earth a shared experience no matter where we live. Skeletons, snakes, flowers, leaves, and all manner of animals inhabit Beaudet’s portraits. The universal symbols connect the portraits; each woman is from a different country, but they are tied together by these archetypes and their love for justice. She uses words, as well, to convey her message: “Alive,” “Still here,” “No” appear in mouths and elsewhere to relay the message of resistance and fortitude.

One of her subjects, however, has recently undergone, what one writer has described as “an alarming metamorphosis.” Aung San Suu Kyi, the de facto leader of Burma is one of Beaudet’s celebrated figures, and the first in the exhibit.

Surely no one can argue that Suu Kyi’s reputation as a human rights advocate made her an icon of freedom throughout the late 20th century. However, her recent and unmitigated silence concerning her army’s brutal ethnic cleansing of the Rohingya Muslims has led to many of her fellow activists decrying her position.

Beaudet, however, deftly handles this conundrum. At her exhibit table, she addresses Suu Kyi’s failures. It reads in part, “When we decided to paint Daw Aung San Suu Kyi in early 2010, she was a pivotal  activist under house arrest and a Nobel Peace Prize recipient. Now in a seat of power, we urge her to stand behind her oft repeated quote, ‘fundamental violations of human rights always lead to people feeling less and less human.’”

Beaudet goes on to say in her written explanation of Suu Kyi’s inclusion in her exhibit, “Roots to Resistance often chooses one or two of our activist’s organizations to focus on … in this case we use the essence of … Suu Kyi’s earlier sentiments and send the money to supporting the Rohingya people who have been forced from Burma by overwhelming and horrific violence.”

The guestbook at Beaudet’s show is filled with comments from other viewers. Words like “poignant,” “profound,” and “genius” are left to describe the impact her work has left on them. Surely, there is tremendous heart in Beaudet’s work, and without a doubt, those words describe Roots of Resistance.

It is a beautiful reminder of what women around the world forfeit in order to fight against oppression and the horrors of violence perpetrated against us and the people we represent. To raise the consciousness of others is to raise your own profile and thus your own possible sacrifice for the greater good.