Stagestruck: In the Valley and New York, history becomes personal 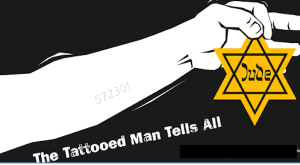 From the title, you might think The Tattooed Man Tells All is a memoir of life on the carnival circuit. It’s anything but. This man’s tat is a five-digit number that was etched into his forearm in the Auschwitz concentration camp.

Peter Wortsman’s one-man play receives its U.S. premiere next month at Silverthorne Theater Company in Greenfield, directed by Ellen Kaplan and starring Keith Langsdale. Woven from interviews the author conducted with Holocaust survivors in Vienna in the 1970s, it takes the form of an expansive one-sided conversation with a composite character called simply the Old Man.

He’s a whimsical fellow who politely offers tea to an unseen guest while recounting the horrors he lived through — and some that he perpetrated. Among the first memories he shares are scenes of violence visited by the prisoners on each other.

These, he explains, were “survival lessons” meted out with kicks and fists. The lesson? Show any weakness and you’re done for, so toughen up. “Survival Lesson One — you have no face, no emotions, no personality. You’re a walking number, that’s all.”

The Old Man has kept his old zebra-striped camp uniform, a grisly reminder that becomes a prop in his tale, taking on a life of its own as it stands in for his younger self while he takes the role of his Nazi tormentor.

Producer Lucinda Kidder told me she’s been struck by “how diluted the power of real-life horror has become in our consciousnesses, with the constant bombardment of our senses from all sides and the normalization of violence in everyday encounters.” In The Tattooed Man Tells All she finds a tonic for that dangerous acceptance. 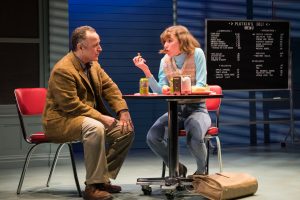 Adam Heller and Julia Knitel in A Letter to Harvey Milk. Photo by Russ Rowland

Another survivor of the camps is at the center of A Letter to Harvey Milk. The piece began life as a short story by local author Lesléa Newman, and now it’s a musical, currently running in New York’s Theater District.

It takes place in San Francisco in the 1980s, when Harry, an amiable but lonely retired kosher butcher, joins a writing class at the local senior center, “just to pass the time.” The first assignment is to “write a letter to someone from our past, someone who is no longer with us.”

His wife Frannie is dead, but Harry addresses his letter to someone else: Harvey Milk, California’s first openly gay politician, who was assassinated in 1976 for his sexuality and activism. The two men, in Newman’s tale, were customers of each other’s shops and became unlikely friends with disparate lives and outlooks.

Harry’s letter opens with a kind of elegy to the man “with big ears and big ideas,” in the (typically Yiddish) form of a question: “You had to go get yourself killed for being a faygelah? … Alright, so you liked the boys. I wasn’t wild about the idea, but I got used to it.”

A line from the letter has become a song in the musical: “The night you died, San Francisco cried — thirty thousand people marched as one.” One of those marchers was Harry’s teacher, Barbara. A Jewish lesbian, she is moved to tears by the letter, and by finding an elderly Jew with an open mind. The two strike up a friendship, as she draws him out of himself and he teaches her the Yiddish words and phrases that permeate the dialogue and score.

The musical takes Newman’s original, told in the form of Harry’s entries in his writing-class journal, and opens it into a more detailed storyline, with a seven-member cast and songs by Laura I. Kramer, Ellen M. Schwartz and Cheryl Stern. An earlier version, produced in 2012, won numerous awards for new work.

In the short story, Frannie is but a memory, but here she’s an onstage presence, albeit a ghost, skeptical and opinionated. Likewise, the spirit of Harvey Milk hovers around the fringes of the present.

A Letter to Harvey Milk: The Musical opened in March and has just been extended through June in the Acorn Theatre at Theatre Row, on West 42nd Street. Critics have called it “a surprisingly fierce little musical” … “brimming with warmth and clandestine power … that stows away in your heart without you even noticing.”

“There are autobiographical elements of the story,” Newman told me. “The teacher, like me, is a Jewish lesbian whose family struggles with accepting her.” She added, “My entire family underwent a huge healing as a result of seeing the show together. And that was a great gift to me.”