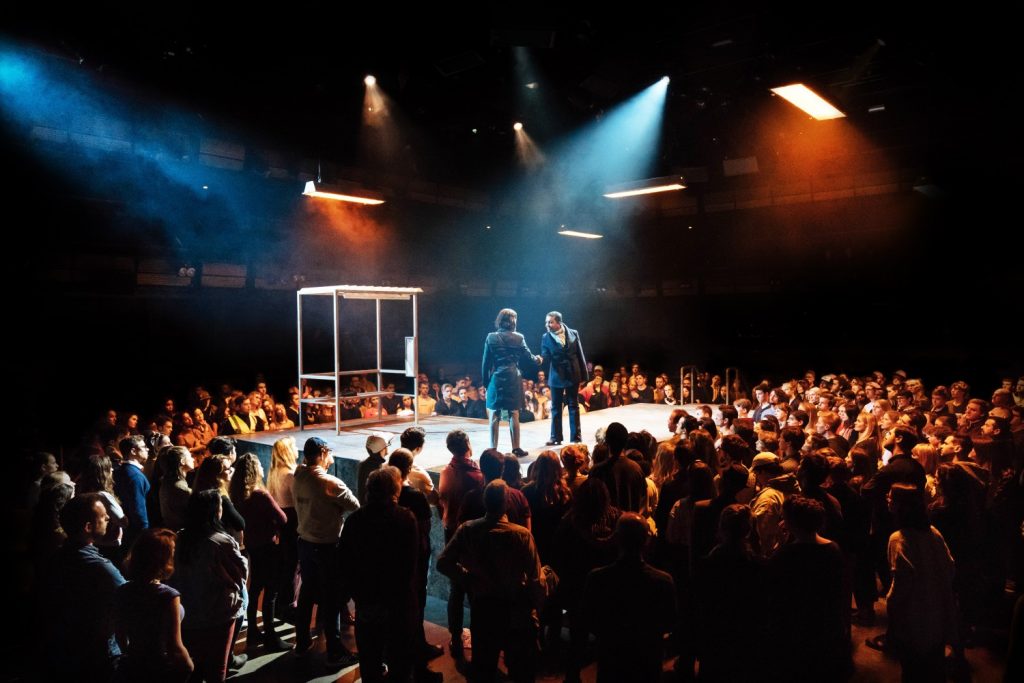 Julius Caesar is one of the most macho plays in Shakespeare’s male-heavy canon – only two women in the cast, both of them in and out before the thing is half over. But a new production puts many more women onstage, one of them in the play’s most macho role.

Performed in the Bridge Theatre, London’s newest playhouse, it’s beamed stateside (and around the world) as part of the NT Live series of HD-satellite broadcasts from British stages. There’s a screening at the Amherst Cinema this Saturday, April 21, at 12:30pm.

The Brits are way ahead of us in cross-gender and “color-blind” casting. Here, Caesar’s and Brutus’s wives are both women of color, and with the exception of the central males, all of them white, the show is cast race- and gender-blind. 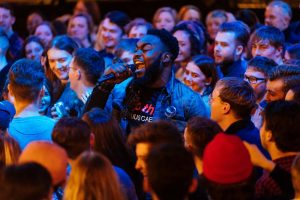 Or maybe not so blind. In Nicholas Hytner’s thrilling production, there’s no explicit thematic overlay that transforms ancient Rome into a multicultural, non-patriarchal society. But the very fact that half the cast are not white males – from the Senators who conspire to assassinate Caesar to the Roman citizens who swarm to whoever is the hero of the hour – serves as an implicit What if? and Why not? within this timeless tale.

Now about those Roman citizens. The other striking thing about this production is its total-immersion framework. The Bridge’s ultra-flexible space has been transformed into an open disc, a populous plain recalling the Roman Forum. Stages rise from the floor and are surrounded by the audience, who become the Roman populace, up-close observers of the swirling action. 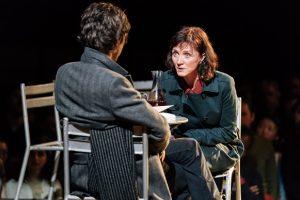 It’s a bit of a gimmick, but it matches the play’s epic scale and recalls the theater of Shakespeare’s day – those groundlings who are resurrected today in the new Globe Theatre just along the Thames. This is no facsimile production, though, with the actors in modern dress and the air around them shattered by rock’n’roll and the sounds of modern warfare.

In the cross-gender portion of the cast, I particularly admired Michelle Fairley as Cassius, giving that conspirator’s “lean and hungry look” the predatory assurance of a lioness, and Adjoa Andoh as the snarky co-conspirator Casca. Standouts among the men are Ben Whishaw’s bookish, bespectacled Brutus, consumed by conscience, and David Calder’s Caesar (yes, it’s still Julius here), his imperial arrogance shaded with an old man’s fragility. I found David Morrissey not only too old for Marc Antony, the lightweight turned hero by events, but not up to the character’s chameleon shifts of temperament.