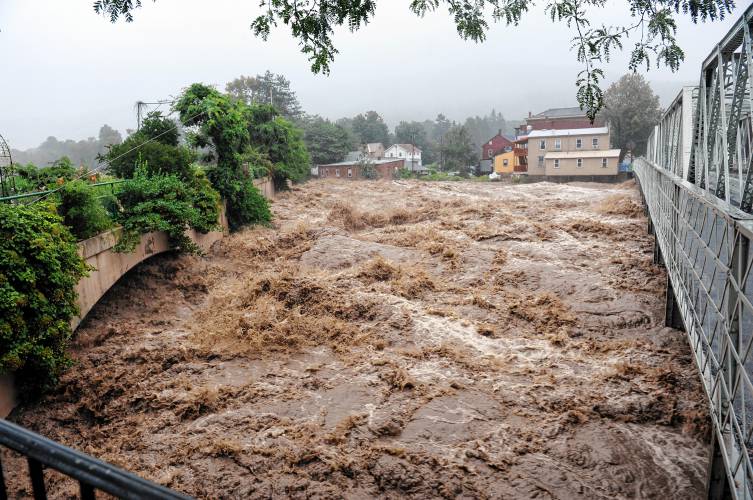 Over 20 municipal leaders from all over Western Mass attended an April 24 meeting with state environmental officials to discuss a state grant program that will help communities all over the Commonwealth to prepare for their unique climate change needs.

Katie Theoharides, assistant secretary of climate change at the state’s Energy and Environmental Affairs department, opened the meeting in Greenfield with two powerful images. The first was of a coastal neighborhood in Massachusetts on the verge of being overtaken by incoming waves. The second was of the Iron Bridge in Shelburne Falls during tropical storm Irene in 2011. 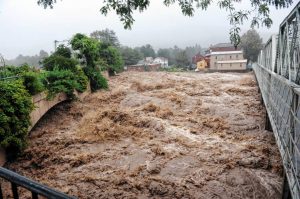 Recorder File Photo/Paul FranzThe Deerfield River between the Bridge of Flowers and the Iron Bridge in Shelburne Falls during Tropical Storm Irene as seen from the Buckland side.

“We need to have a better idea of what communities are dealing with and what our communities need,” Theoharides said.

Municipal leaders from Deerfield, Greenfield, Longmeadow, Palmer, and the Berkshires, attended the meeting. Carolyn Ness, chair of the Deerfield Board of Selectmen, said in the meeting that in 2005 there was about $4.5 million worth of damage in Deerfield after an extreme weather event. She said that they spent a similar amount in 2007 and 2009, and then Irene hit in 2011.

“The huge message here is that these extreme events have real financial and fiscal impacts,” Ness said.

The MVP program is in its second year and is looking to double in size in 2018. The program received a $5 million funding bump from Governor Charlie Baker in April following the four nor’easters that hit coastal communities this spring.

“We’re really excited about this program,” said Ness. “The federal government is really leaving a gap.”

The MVP program provides two kinds of grants, planning grants and action grants. Planning grants award communities $10 – 75,000 to assess their strengths and vulnerabilities for dealing with climate change and to make a resilience plan. Communities work with a certified MVP service provider to complete the program and then, once they receive MVP status, have a year to take action on some of the action points they identify. The action grants, which are in their pilot year this year, then provide up to $400,000 to execute those projects.

“This is one of the easiest state programs,” Ness said.

Ness said that Deerfield is also hoping to apply for an action grant, which is due on May 18. Theoharides explained that the timeline for the 2018 action grants was compressed due to the funding that became available in April, but that the 2019 funding would likely be available soon for people who can’t make the May 18 deadline.

John Dearborn, Longmeadow fire chief, said that losing power during snow and ice storms is his biggest concern going forward. He asked if the action grant could be used to fund a backup generator system. Theoharides said that it would be considered if it was powered through renewable energy.

“It would also have to support resilience goals,” Theoharides said.

Ness said that Deerfield is hoping to apply for $400,000 from the action grant program for culvert replacement. The action grants cover engineering and permitting costs in addition to implementation, which Ness said is a huge help for a small community like Deerfield.

Secretary of Energy and Environmental Affairs Matt Beaton said that the MVP program is likely to receive an additional $2 million for its operating budget in the state budget that is currently working its way through the House of Representatives. Beaton said that the additional operating budget will primarily go towards hiring more staff members to support the MVP program as more communities use the program.

“This is to try and make the Commonwealth more adaptive and more resilient,” Beaton said. “We’re trying to make it as painless as possible on the local level.”