A skip, hop, and a jump away: A local, adult jump rope team makes it to nationals 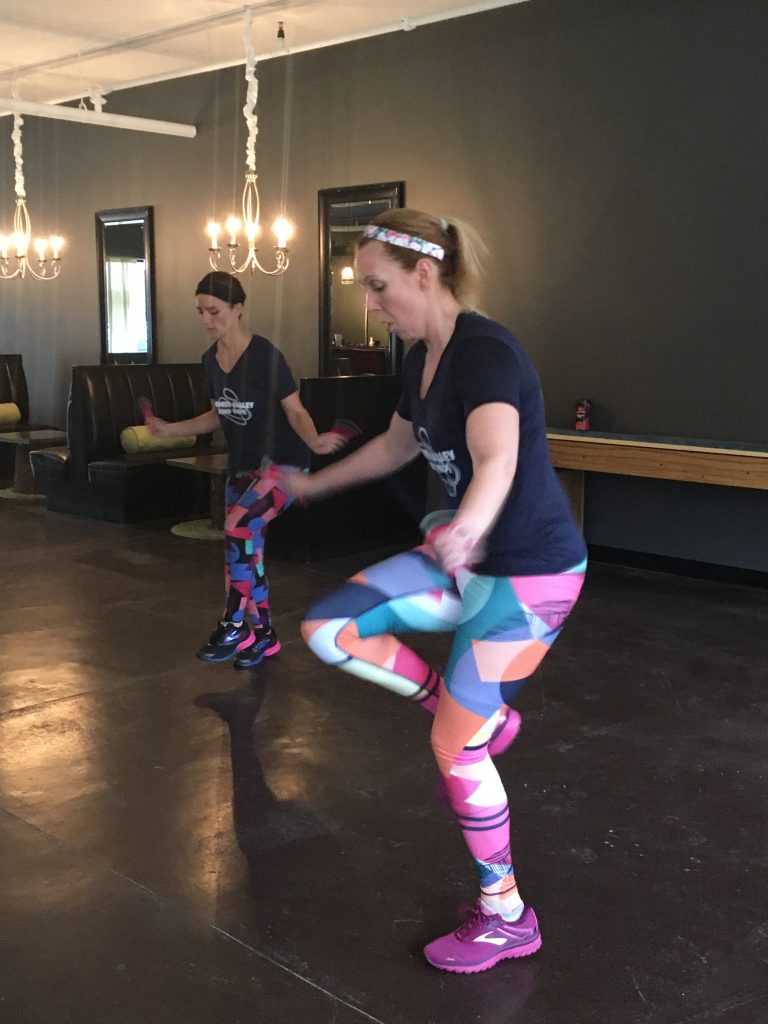 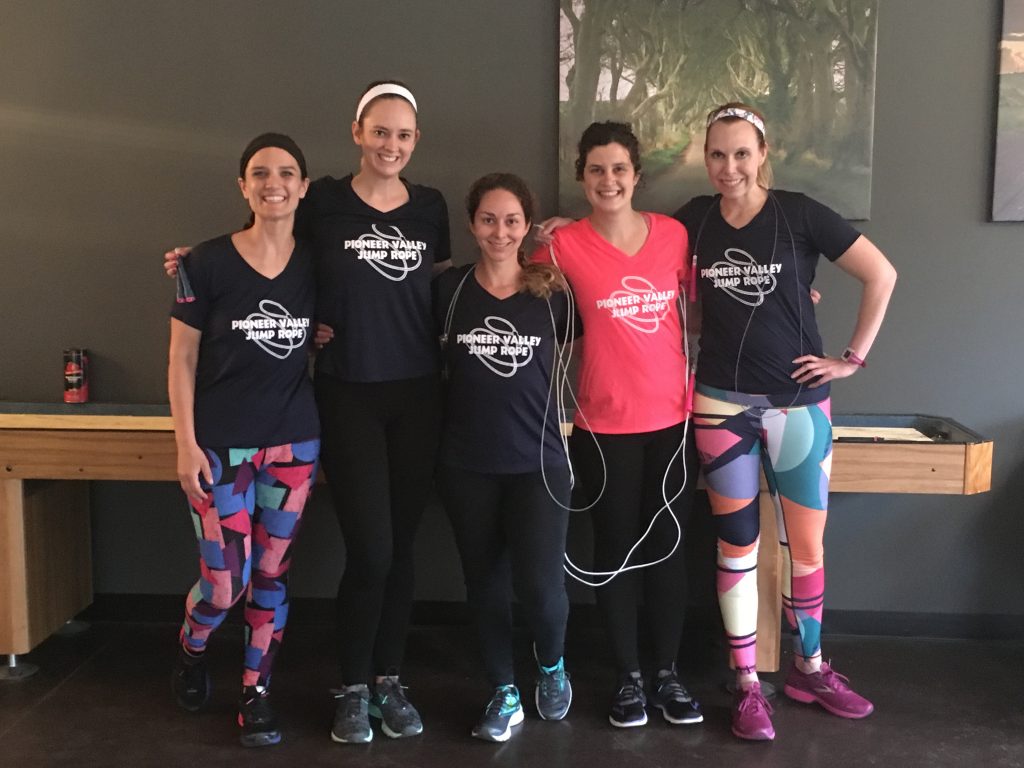 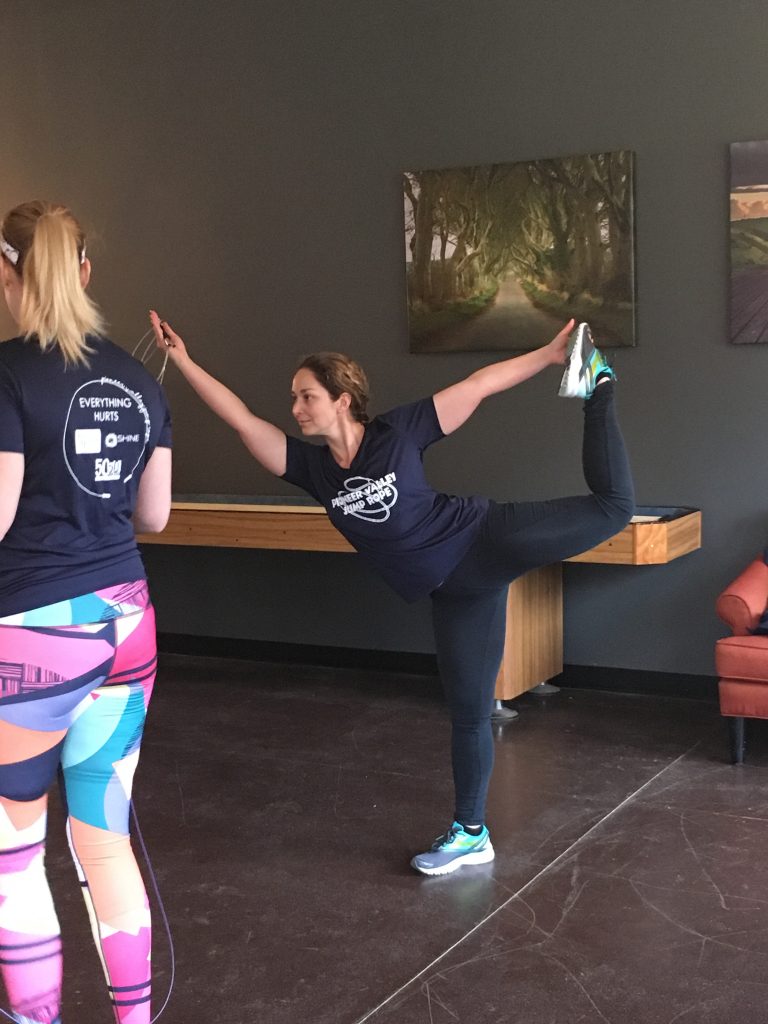 “As far as we know we’re the only (team) that jumps in a bar,” said Jennifer Therkelsen, 31, of Shutesbury.

Therkelson, who is the fundraising manager for the all-adult Pioneer Valley Jump Rope team, was referring to the team’s practice locale, which is the Taproom in Hadley. The team is there, providing a sort of unique form of live entertainment on Wednesday evenings as they practice.

While most people think of jump rope as a children’s game, there is a large national network of competitive jump ropers of all different ages. Jennifer Sorcinelli, 30, of Florence, used to compete as a kid and founded Pioneer Valley Jump Rope last year. After competing alone last year, Sorcinelli brought more friends into the fold, and now a team of five women from all over the Valley are headed to the USA Jump Rope Nationals in Wisconsin in June. The team is moving on to that competition after placing first in several events in the regional competition.

Therkelsen and a few other members of the team cheered Sorcinelli on while she competed last year, and said that watching her jump inspired them.

“We had that, ‘we can do this,’ moment,” Therkelsen said. 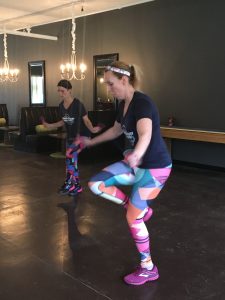 Sorcinelli said that there are several other teams in Massachusetts and across the region that have members of all ages, but that Pioneer Valley Jump Rope is the only team she knows of made up of only adults. In competitions, the teams compete based on age bracket. The youngest member of the Pioneer Valley team is 29 years old. All of the women agreed that the level of fitness required for the sport is harder for them than it is for younger competitors.

“At this age, even if you’re in shape it makes you feel really out of shape,” said Heather Salazar, 39, of Easthampton.

Justin Killeen, the owner of 50/50 Fitness/ Nutrition in Hadley, explained that jump roping engages fast-twitch muscles that help with agility. He said that those muscles degrade over time, so it makes sense that the PV Jump Rope team has to work a little harder than their younger counterparts to stay in shape.

Many of the team members have a background in the fitness world, including a yoga instructor, a kickboxing instructor, and Ashley Mader, 35, who is a spin instructor. Salazar said that while jumping rope seems like a cardio activity, it actually requires a lot of endurance and stamina because of the speed and duration of the jumps.

“Our jumping specialty is in anaerobic activity, which is why it’s no longer a cardio workout, it’s a strength workout,” Salazar said.

Killeen said that jump roping is a full body workout, not just a calf exercise, and that it is unique because it can raise the jumper’s heart rate up to nearly 90 percent of maximum really quickly.

“That’s why boxers have been using it for so long,” Killeen said. “It’s one of the few ways to get your heart rate up to that extent.”

Many of the competitive events are based on the number of jumps you can do in a certain amount of time, so speed is the name of the game. While practicing, Salazar was timed jumping nearly 100 times in 30 seconds, which works out to be more than three jumps per second. The regional competition was a grueling 12 hours of events. 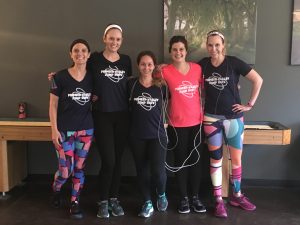 The nature of jumping also makes jump rope an impact exercise, which can be hard on the competitors joints. Pioneer Valley Jump Rope’s team motto is aptly “Everything hurts.”

“We all get shin splints,” said Sorcinelli.

Despite the physicality required by the sport, the team members agreed that it was a fun way to stay in shape.

“I’m the kind of person that needs to be tricked into working out, so this is great,” said Becca Reddish, 29, of Hadley.

Therkelsen added that even though she identifies as non-athletic, jump roping was easy to get into because it doesn’t require much equipment.

“Anyone can try it, all you need is the jump rope,” Therkelsen said.

Sorcinelli recommended trying to jump rope to a favorite song to see how long you can last. She also said that anyone is welcome to come to their practices to try it out at 5:30 p.m. on Wednesdays at The Taproom. Killeen suggested trying to add one minute of jumping between strength exercises.

“It’s a lot of fun. If you’re doing a lot of traditional exercises you may not get your heart rate up,” Killeen said.

Most of the team plans on road tripping out to the Wisconsin Dells in June for the three-day national competition. They will be hosting a fundraising event on June 2 at The Taproom where there will be a group fitness activity next door at 50/50 Fitness/Nutrition followed by raffles and beer. Therkelsen said that Brew Practitioners, a brewery in Florence, will be partnering with Pioneer Valley Jump Rope for the fundraiser by releasing a limited edition brew just for the event: Double Dutch Double IPA.

While the work was hard, none of the team members were complaining about having a cold beer after a few hours of jumping.

“When you mess up, it makes it a little easier,” Therkelsen laughed.