Valley Show Girl: Snacktime! Musical story time with a pirate from the Valley 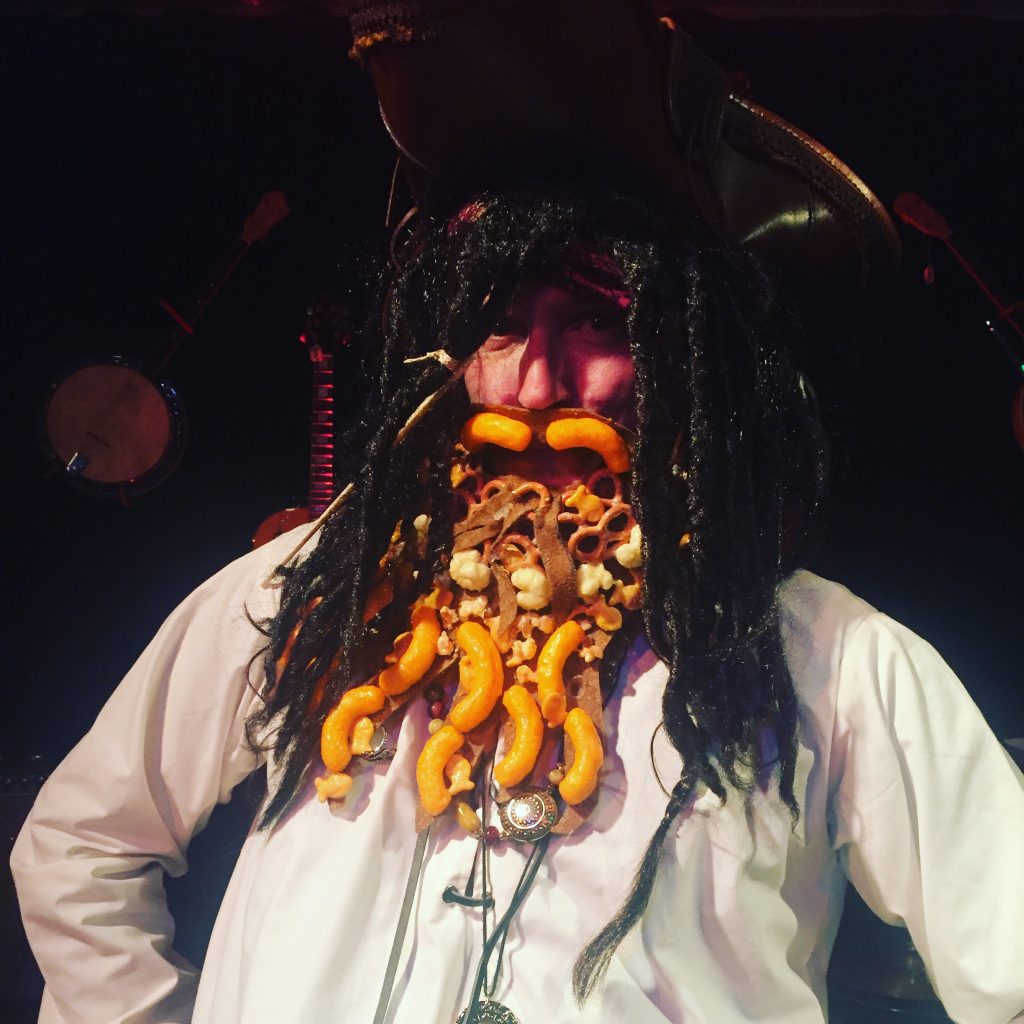 Valley Advocate writer alum Tom Sturm has a new gig these days. Dressing like a pirate and singing the songs of pirate life for kids — but pleasantly appealing for adults as well.

With the album glued in my CD player in my car for weeks, my 7-year-old son and I knew each song by heart. And when the music on my phone synced up to the car, he’d request Snackbeard instead of his normal faves, The Talking Heads or Bowie.

I sadly missed out on his debut show at Smith the day before Easter, so when I heard he was playing the funky Luthier’s Coop in Easthampton, I made it a point to check it out.

I was the first one at the show. I gave Tom a hug and chit-chatted a bit before I ventured over to the newer side of Luthier’s which I hadn’t checked out yet since they opened. It’s just as classy as the other side, with a nice glossy cherry wood bar and comfy, intimate booths. There’s also a large TV above the bar that views the stage from the other side, so you don’t have to miss a second if you hop over to order a drink. I took my UFO White over to the other side just in time for more humans—  young and older — to gather in for soundcheck. 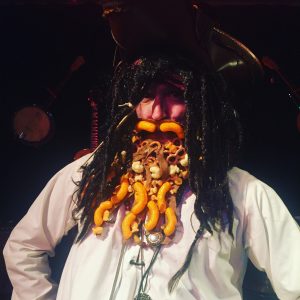 Tom put on his “snackbeard” which is pieced together with, yes, you guessed it, snacks. He has two cheese puffs on his upper lip for a cheesy stash, and the beard is a mixture of pirate booty popcorn, pretzels, goldfish and more cheese puffs. The first beard he made for his debut show at Smith was eaten by squirrels when left outside.

Tom opened the treasure chest on the stage and invited the kids to take a treat, in which they storm the stage to get the little bags of snacks.

As a solo show, he had a backing track to the album and he played the guitar and sang the vocals on top and it was like driving in my car listening to the album, singing along, like we’ve been doing for about a month now.

During “Gold,” Tom’s son, “Snacky Junior” came onstage and threw chocolate gold coins into the crowd. After saying that Snackbeard’s Music is available on iTunes and Amazon, his pirate banter came out with … “Don’t know how they were able to sell music in the Amazon, too many snakes down there!”

The stories in between each song were reminiscent to the album which tells a story in between the songs, leading up to the next song. A really thought-out conceptual album, really. By far the most enjoyable “children’s music” I’ve shared with my son.

After the show, I was curious to know more about the birth of Snackbeard, so I asked Tom some questions.

Valley Show Girl: Can you tell me your musical background

Snackbeard: I’ve fronted or played in a lot of local bands, Southgoing Zax, Birthmark, Antihero, Yanni Difranco, Tag Sale, Big Ugly Wrench (recently rebranded as “Darth Mordor”), and Lisa Palumbo’s band. I try to play every year in something for the Transperformance – last year we were The Ramones. It’s been a long, twisty road that’s run through New York, California, Philadelphia. I was once in an actual rock opera in Boston called Skypaint (written by Russell Chudnofsky). Never hit the big time but I’ve had a thousand priceless rock ‘n’ roll moments, for better or worse. Gotta love it and live it as much as you can.

VSG: What made you do the pirate music thing?

SB: I’ve played just about every kind of music over the last 30 years – punk, pop, country, funk, metal — I have an entire hip-hop EP recorded that no one’s ever heard called “Attila & the Mongol Horde.” My last serious project was called SsasS, which was like seriously Uber-produced Britney Spears dance pop (google it!) where I worked with different female vocalists to achieve my creative vision. It’s all been pretty adult-oriented, but I guess after having a son (now almost 8), I wanted to do something for kids. The pirate theme just seemed sort of natural and I wanted to weave the songs into a story, perhaps a “piratical opera” if you will. It’s been great fun! The album has some rich narration and sound effects of the nautical sort-it’s very immersive, kind of like radio theater or something.

VSG: Have any gigs coming up or Snackbeard projects?

SB: Nothing immediate, but I’ll be playing at the Forbes Library in August and hope to have some other gigs set up soon, mostly at kid-friendly events. I’ve been conspiring with a co-worker at Cooley Dickinson (where I work when I’m not out pillaging) to do something to help out with our Cooley Cares for Kids fundraising campaign. I hope to forge east of the river as well in the coming months-I hear there’s a fair bit of gold over there!

To hear Snackbeard for yourself, go to Amazon,  https://www.amazon.com/Snackbeard/dp/B078SJ4MBS. Just be careful of the snakes.