Following alleged assault, tattoo parlor looks at what it could have done differently 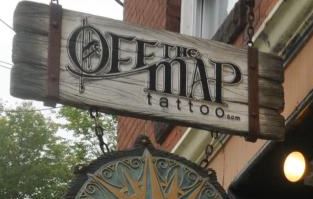 Following public backlash online, the owner of Off the Map tattoo Gabe Ripley says that he regrets not having a no tolerance policy for sexual harassment and assault in the shop four years ago, but that there is now a no tolerance policy in place. There was harsh criticism on Facebook on May 1 after Off the Map published a post about tattoo artist Watsun Atkinsun, who was accused of violating and sexually harassing a customer at Off the Map’s Easthampton location in 2014, and then accused of assaulting a tattoo artist in Brooklyn last month.

“Unfortunately we’ve had a handful of incidents where tattooers would say inappropriate things, but this is the only case where there was inappropriate touch,” Ripley said. “In the past we have sometimes given warnings to tattooers so that they don’t repeat this behavior and they learn from it. Clearly I feel like I wish we had straight up banned (Atkinsun) and had a zero tolerance policy.”

This incident came to light following a recent social media post by a tattoo shop owner in Brooklyn, in which the owner, Anka Lavriv, accused Atkinsum of another assault at her shop, called Black Iris Tattoo. In a public Instagram post from April 20, Lavriv wrote that Atkinsun violated her while serving as a guest tattooer at her shop.

“As painful as it is for me to put this out there I have the privilege of sharing it with a large audience and it’s my responsibility to look out for women who don’t and whose complaints would have been brushed off,” Lavriv’s post reads.

Atkinsun denies that the incidents at Off the Map or at Black Iris Tattoo in Brooklyn were sexual assault or harassment and said that he has been accused of those things without a fair trial or litigation, calling the backlash against him a “witch hunt.”

“What happens at times is that you’ll be tattooing somebody and you’ll be up close to them and you’re engaging … and that vibe is taken out of context with certain people that are kind of uptight and … they’re just not used to a real man who’s just confident and enjoying the time and tattooing,” Atkinsun said in an interview Thursday.

According to Ripley, the violation and harassment claims against Atkinsun while he was a guest tattooer at Off the Map in 2014 were reported to management by the client shortly after it happened. The accuser, who was contacted but asked to remain anonymous due to the private nature of the incident, also corroborated that she reached out to management almost immediately after it happened. Ripley said that a manager at Off the Map contacted the client and that he and the manager discussed a resolution with the client and gave the client a credit at the shop.

“The client was very thankful and wrote a message for us expressing her support of Off the Map and her disdain for Watsun. And then immediately after talking to the client, the manager and another team member (told Atkinsun) the client’s experience,” Ripley said.

Ripley reported that Atkinsun did not deny the client’s experience at the time and that he apologized and was told that this would be the “final warning.”

“He was given a warning that if any of this happened again he wouldn’t be welcome,” Ripley said. “As soon as we heard of the report from Brooklyn he was not welcome back.”

Atkinsun said that while he did apologize for making the client uncomfortable, he did not consider the incident to be sexual assault or harassment.

Ripley emphasized that Off the Map has been continuing to grow and evolve in the 20 years that they have been open and listed several changes that have been implemented in the last four years in their initial Facebook post.

One employee, who wished to remain anonymous to protect her future in the industry, said that she worked at Off the Map within the last year and saw both positive changes and a lack of diversity in the staff while employed there.

“I think that there’s definitely a push to hire more female employees and to work towards gender equity,” the former employee said. “But there was a big imbalance because that front staff are almost all women and the tattooers are majority men. It’s still mostly female employees who have to scrub the toilets every day and who are in a more receptionist role, so that was one issue I had with the structure.”

“There was a female employee who had left … but (there were) no systems in place to protect her. The sexual harassment policy is new,” the former employee said.

“We are constantly working to create more open, fair, honest communication. Any issues that have been brought up to me, I’ve dealt with. There are people that are no longer here,” Ripley said. “We do not tolerate sexism, misogyny, racism, or being disparaging towards victims. If anyone (experiences any) of this we absolutely want to hear about it.”