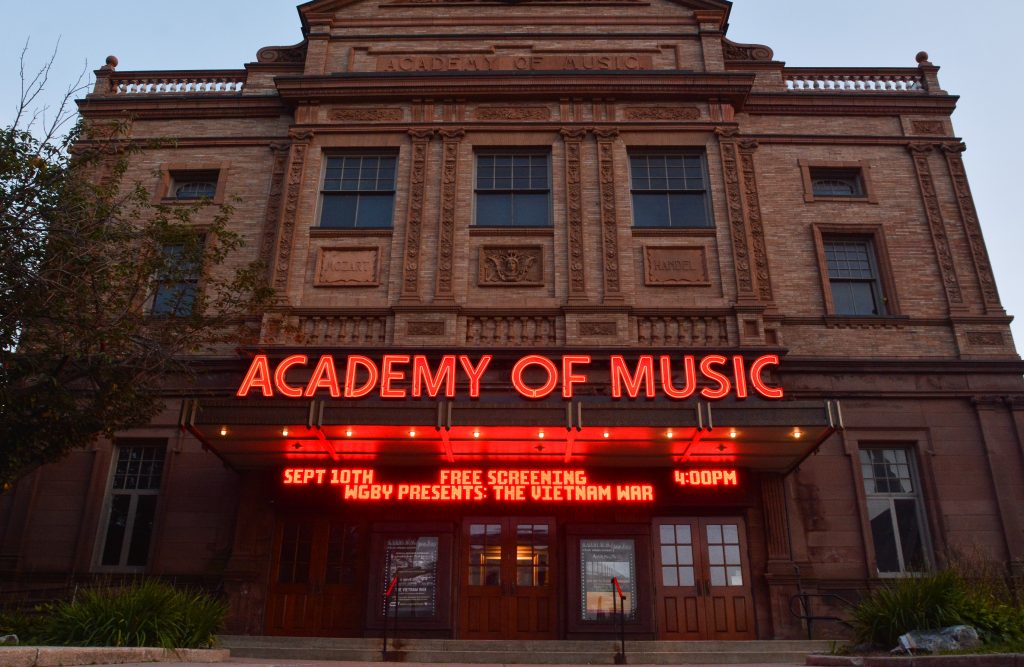 Even in a New England town with a fair bit of history, the Academy of Music in Northampton has roots that run deep. Founded on the vision of philanthropist and Northampton native Edward Lyman, the Academy opened to the public in May of 1891 and quickly became a favorite stop on the tour circuit. Mae West, Sarah Bernhardt, and Boris Karloff — Frankenstein’s Monster! — have all graced the Academy stage. Harry Houdini (spoiler alert) once had a trap door cut into the stage.

Since then, the grand old house has had ups and downs, shown movies and theater, and even hosted this writer as part of a First Night performance some years ago. These days the venue has found success as a mixed use space, bringing an eclectic slate of offerings to Valley residents. Over the next week, three different events give the curious a chance to see what the Academy is — and has been — all about.

It all begins with a look back: the Academy of Music History Tour is set for Thursday the 17th. A free tour, led by Academy manager Addie MacDonald and technical director Hugh Hall, it will give attendees a peek behind the curtain — literally, as one of the tour’s attractions is the recently uncovered and conserved 1913 Tuttle scenic curtain — at some of the theater’s storied past.

A day later comes a free screening of Vanishing Kings: Lions of the Namib, the 2015 documentary from directors Lianne and Will Steenkamp. The story it tells is of an unusual tribe of lions that were once thought to be extinct: the desert lions that roam the sand dunes and beaches of Africa’s Skeleton Coast. To keep their future alive, the “Five Musketeers” — male cubs about to strike out on their own — must survive in the harsh landscape of the Namib desert and become the next generation of adult lions. Dr. Andrew Stein, founder of the CLAWS Conservancy organization, will be on hand after the film to discuss the state of big cat conservation and human-wildlife coexistence in Africa.

And on Tuesday, another free screening explores the controversial topic of arming teachers in our schools. G is for Gun: The Arming of Teachers in America is a new film from local filmmaker Julie Akeret, whose Big Ideas for Little Kids (2014) chronicled an effort to bring philosophy to the second-grade children of a Springfield charter school. Her latest work, co-directed with Kate Way, moves her out of the Valley to Sidney, Ohio, a rural-industrial community divided by the idea of arming their teachers. There, biometric safes keep “a Glock 23 with an extra clip” a fingerprint away for teachers who are part of the first responder team, and training exercises — early in the film a phys ed teacher in a mask prowls outside the gym during an active shooter workshop — are part of the job. But while some teachers think it’s a common-sense safety measure, others voice concern not just about gun safety, but also about changing the character of the world in which their students are living and learning. For Akeret and Way, respecting both sides of the argument was paramount — even if it sometimes meant putting their own feelings to one side. The result is a documentary that does more than many to try to remain true to the form. As with Akeret’s earlier work, this new film will also be screened on WGBY — if you can’t make the Academy show, catch it on television Thursday, May 31, at 10 p.m.

G is for Gun: The Arming of Teachers in America, Tuesday May 22, 6pm, Academy of Music, Main St, Northampton.