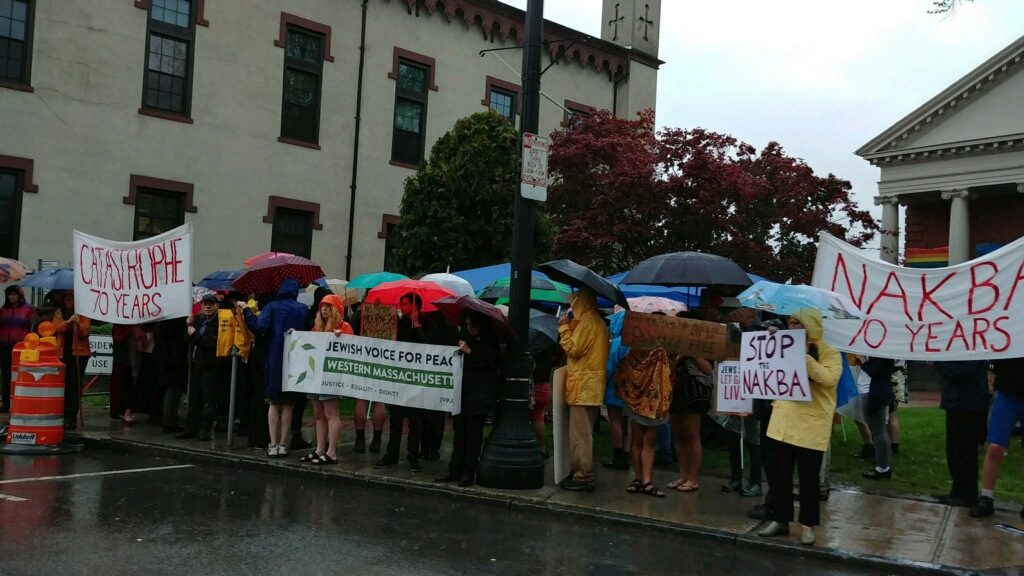 Despite the violent rain and thunderstorms, about 50 activists, including some from the group Jewish Voice for Peace Western Mass, gathered on May 15th in Northampton to commemorate the exile of Palestinians 70 years ago and to bring attention to the Palestinian protesters who were killed this week by Israeli soldiers in Gaza. The event was held outside of the Unitarian Church in Northampton. 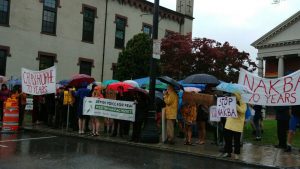 Joseph Levine, a philosophy professor at the University of Massachusetts Amherst and an organizer of the event for Jewish Voice for Peace Western Mass, said that as a Jewish-American he feels doubly responsible for standing up against Israel’s violent behavior against Palestine.

“Israel claims to be a country for all Jews. How can these people do these things in my name?” Levine said. “I’m also an American citizen and the U.S. has been the primary economic and political backer of Israel.”

Tuesday’s event was planned to commemorate the 70th anniversary of the Nakba (“catastrophe” in Arabic), when at least 700,000 Palestinians were forced to leave their homes. Levine explained that the Nakba is commemorated on May 15 because it is the day after Israel declared itself a state in 1948. The Palestinians who were expelled 70 years ago and their descendants now make up the seven million Palestinians who are still refugees today.

“It’s important for people to understand that this event really is the cause of the Israel-Palestine conflict,” Levine said.

He went on to say that he did not believe lasting peace in the conflict would be possible until, “the rights of those who were driven out are recognized and (the Nakba) is acknowledged on the part of Israeli Jews.”

The commemorative event also aimed to address the recent violence at the Israeli border wall in Gaza.

“The current nonviolent protests in Gaza – under the banner of the ‘Great March of Return’ – may climax on this day with a great mass of Palestinian refugees attempting to breach the fence that locks them into what has been described by many as the largest ‘open-air prison’
in the world,” the event’s press release reads.

The latest reports indicate that 60 Palestinian protesters were killed by Israeli soldiers on May 14, the same day that the United States officially broke decades of tradition and moved its Israeli embassy from Tel Aviv to Jerusalem.

“The Israelis are just shooting them down, it’s astonishing,” Levine said. “There’s not a single report of a single scratch on an Israeli soldier or citizen.”

Levine said that given the United States’ historic financial and political support of the Israeli state, representatives now have a duty to condemn the Israeli violence.

“Jewish Voice for Peace Western Mass calls on our government, and our representatives in Congress, to live up to U.S. commitments to protect human rights and warn Israel to obey international law and refrain from a violent response,” the press release reads.

Levine said that the group plans on targeting Massachusetts Senators Elizabeth Warren and Edward Markey with a phone call campaign to encourage them to hold Israel accountable.

“This time we want people to go further. To speak out is one thing,” Levine said. “It’s time to hold Israel accountable.”

Warren and Markey both signed a letter – signed by 13 U.S. senators – urging Secretary of State Mike Pompeo to do more to “alleviate the ongoing humanitarian crisis in the Gaza strip.” The letter asks the administration to reinstate its funding for the United Nations Relief and Work Agency for Palestinian Refugees and to support proposals that build the economy in Gaza and encourage the flow of goods and people in and out of the territory.

“I am deeply concerned about the escalating deaths and injuries in Gaza,” said Warren when asked for comment. “Israel has a right to defend itself from violence by Hamas, but it must exercise restraint against Palestinian civilians and peaceful protesters. I’m troubled by the Trump Administration’s response – the U.S. should be working with Israel and the Palestinians to de-escalate violence, to promote human rights, and to help achieve peace.”

Levine said that the activists from the Jewish Voice for Peace Western Mass will be asking Warren and Markey to support actions like withholding financial support to Israel or supporting a Security Council Resolution that condemns violent Israeli actions against Palestinians.

“If they’re going to shoot innocent protesters down there’s got to be consequences,” Levine said.