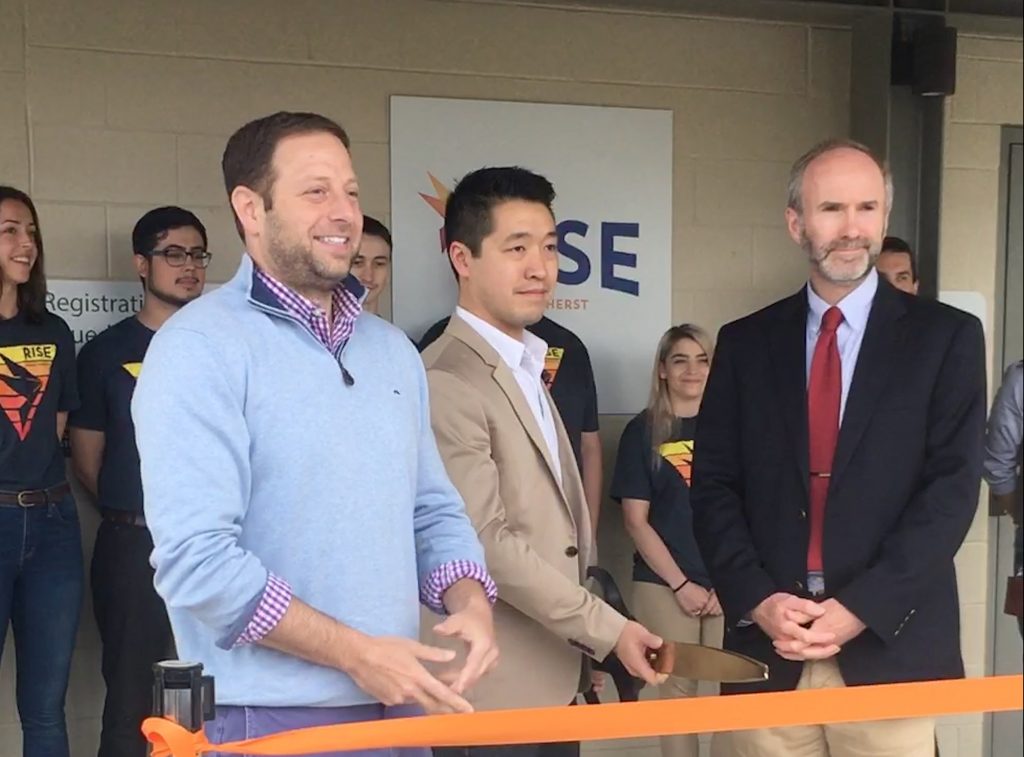 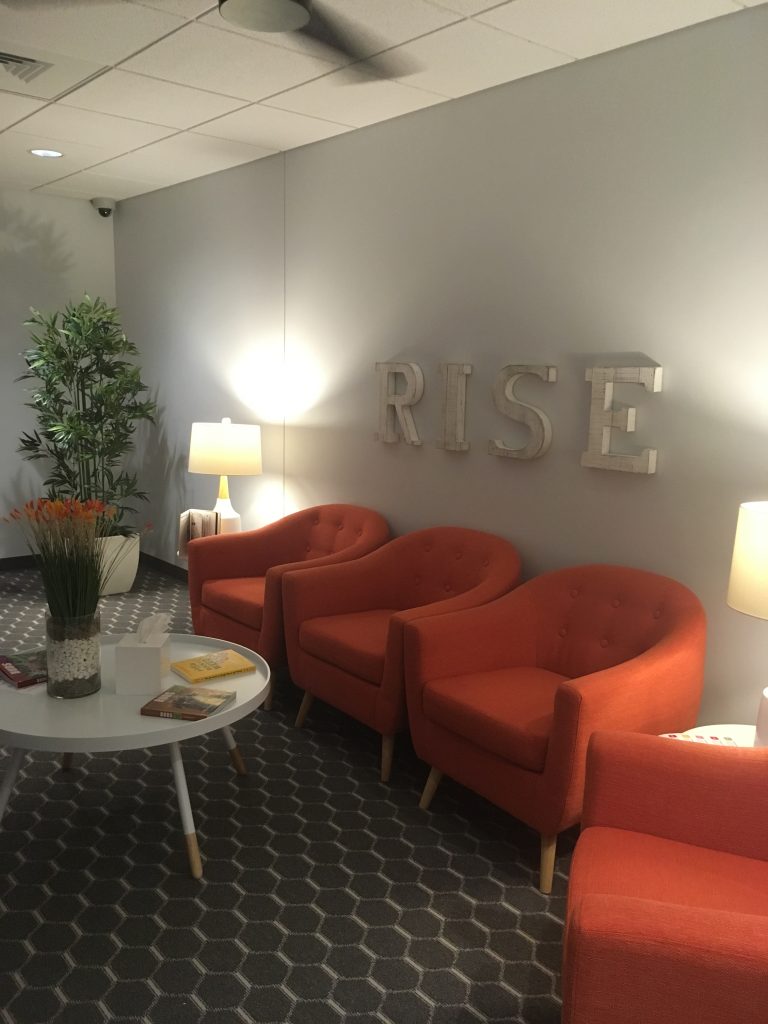 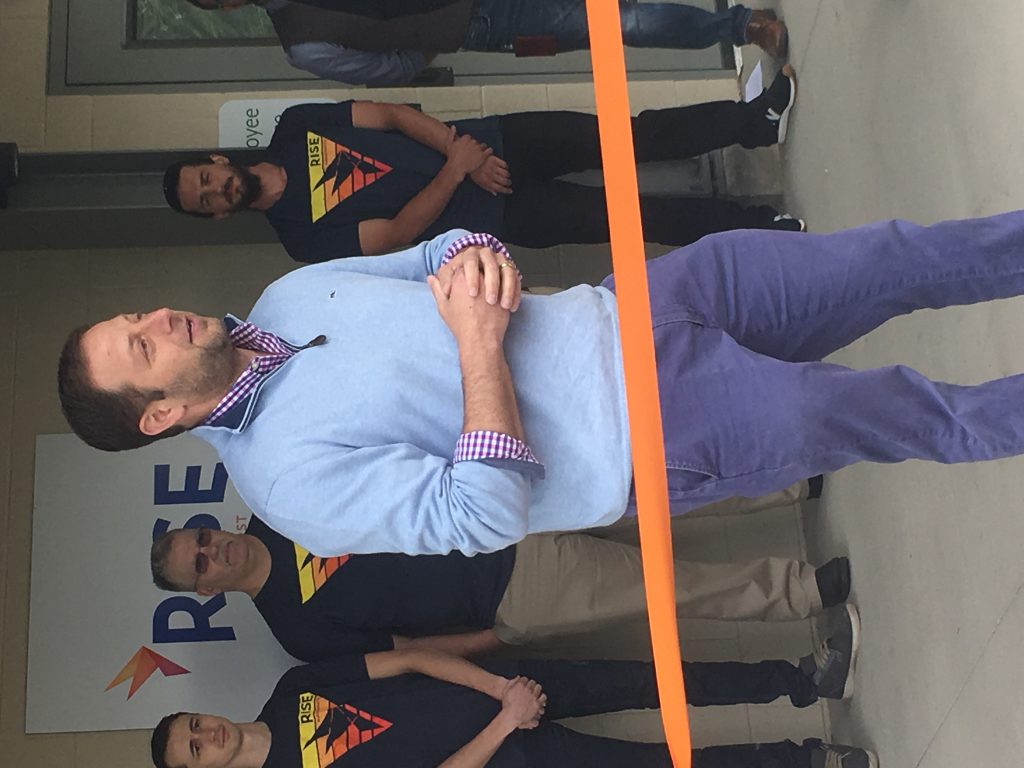 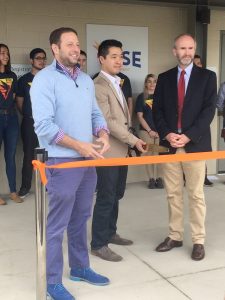 The big scissors were out in Amherst this week as the CEO of the national company Green Thumb Industries (GTI) cut the ribbon in front of the town’s first medical marijuana dispensary, called RISE Amherst. Despite being based in Chicago, Pete Kadens, director and CEO of GTI, said that GTI wants to be a positive contributor to the community by helping to alleviate the opioid crisis by offering an alternative medicine and employing people who have been affected by the war on drugs. RISE Amherst is GTI’s first dispensary in Massachusetts, though they also operate in Nevada, Illinois, Florida, Pennsylvania, and Maryland. GTI also has a large cultivation facility in Holyoke.

“Let’s not be strangers!” said Pete Kadens, director and CEO of GTI. “Let’s be better collaborators here in the community.”

As Geoff Kravitz, Amherst’s economic development director, pointed out in an interview, having a medical dispensary in Amherst will make it easier for medical marijuana patients to get the product they need.

“We know that without (the town’s) support, things would have been really challenging,” Kadens said.

With 45 retail locations in six different states, GTI had enough money to renovate an older building in Amherst for the dispensary and to afford the licensing fees to be a medical marijuana facility. According to Kravitz, it was their experience establishing dispensaries in other states that made GTI appealing to Amherst, despite the fact that they aren’t a local company.

“There are very few communities in Massachusetts, from a municipal perspective, that have experience in this new industry,” Kravitz said. “(GTI) is field tested in other states.”

GTI and its CEO Kadens are based in Chicago, but Kadens said that they take their commitment to the individual communities where they operate seriously.

“We have a pretty robust giving back program,” Kadens said. 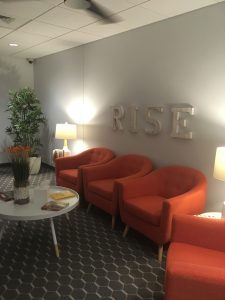 The host agreement with Amherst guarantees that 3 percent of gross sales will go towards the town and the company is required to work with police and the community around issues like public safety. GTI also repaired a former auction barn at 169 Meadow St. for use as the dispensary.

“(It’s) not a huge source of revenue,” Kravitz said. “It’s more a way to offset any costs of having a medical marijuana dispensary in town.”

With no big financial incentive for hosting a medical marijuana dispensary, what are the benefits of being a host community? Kadens pointed out that medical marijuana can be an important alternative to prescription drugs, and they have the opportunity to employ people who’ve been affected by the war on drugs. RISE Amherst will employee 15 to 20 people.

“We are tired of dying at the hand of opiates and prescription drugs,” Kadens said during his speech at the ribbon cutting. “We are going to give jobs and opportunity to the people who have been worst affected by the war on drugs.”

In Holyoke, GTI went beyond their required $15,000 community grant requirement. In the fall of 2017, GTI hosted a job fair that attracted hundreds of people. They also hosted another job fair this March where they offered 125 people who have been negatively affected by a criminal record a free session with a lawyer and a free copy of their Criminal Offender Record Information or CORI.

“The very thing that catalyzed their difficulties is now catalyzing their opportunity,” Kadens said. “We just want to be active and involved in our community.”

Kravitz says that he hopes to use the revenue generated by the new dispensary to fund additional security and traffic needs near the dispensary, but also to support more education opportunities.

“We have 5,000 new residents every year,” Kravitz said, referring to the incoming college classes at the University of Massachusetts Amherst, Hampshire College, and Amherst College. “Making sure everybody understands the law is really important and we have to do that every year.”