Basemental: What Are You Afraid Of? Fred Cracklin’s Looming Spook 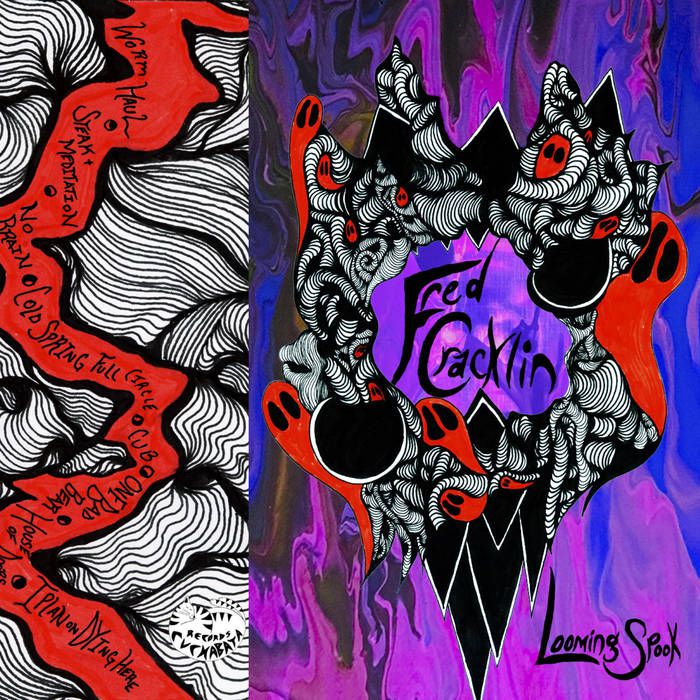 Local legend Thurston Moore — Sonic Youth, Chelsea Light Moving, one off noise sets all over the Valley — had a cameo in an adult talk show called Space Ghost Coast to Coast. Moore played a character called Fred Cracklin in a 1996 episode of the Cartoon Network show dedicated to jazz guitarist Sonny Sharrock. The show got weirder as it progressed — evolving from spoof to surrealism.

Adam Bosse and Max Goldstein have fittingly adopted the esoteric character as a band name for their duo of quixotic spazz. Built on a wall of notes, the album starts cranked to full-exposure. Goldstein’s drums enter, followed by a squall of feedback from Bosse’s guitar and serious metal-ish riffage. By the fifth second of their debut album’s first track, listeners know what they’re getting into.

The album, titled Looming Spook, has eight tracks, which are unrelenting as they sputter and spark through a messy cacophony of unhinged noise. The instrumental tracks contain many extremes — digitally processed samples and free-wheeling saxophone to accessible riffs and unquantifiable sprawl. Song titles like “Steak and Meditation” or “Cub” and “One Bad Bear” elucidate these juxtapositions.

The whole record does sound like spook is indeed looming — but what are we, the listeners, to be spooked about? Halloween? White men (wielding assault rifles; abusing their power)? Eighty-degree freakishly warm days in the dead (the heat?) of winter? That much is left for the listener to figure out.

Fred Cracklin’ is a band whose sound, for better or worse, is rooted in Bosse and Goldstein’s chops. You can hear the years, months, and hours of practicing that went into Looming Spook. Bosse is able to transition seamlessly between riffs and scales but also manages to produce noises I didn’t realize a guitar could even make. Likewise, you can hear Goldstein’s influences on his sleeve, like Deerhoof and Lightning Bolt.

So, come for the obscure Thurston Moore reference and stay for the gnawing spook. Fred Cracklin’s Looming Spook is available on Bandcamp and cassette from Cuchabata Records.