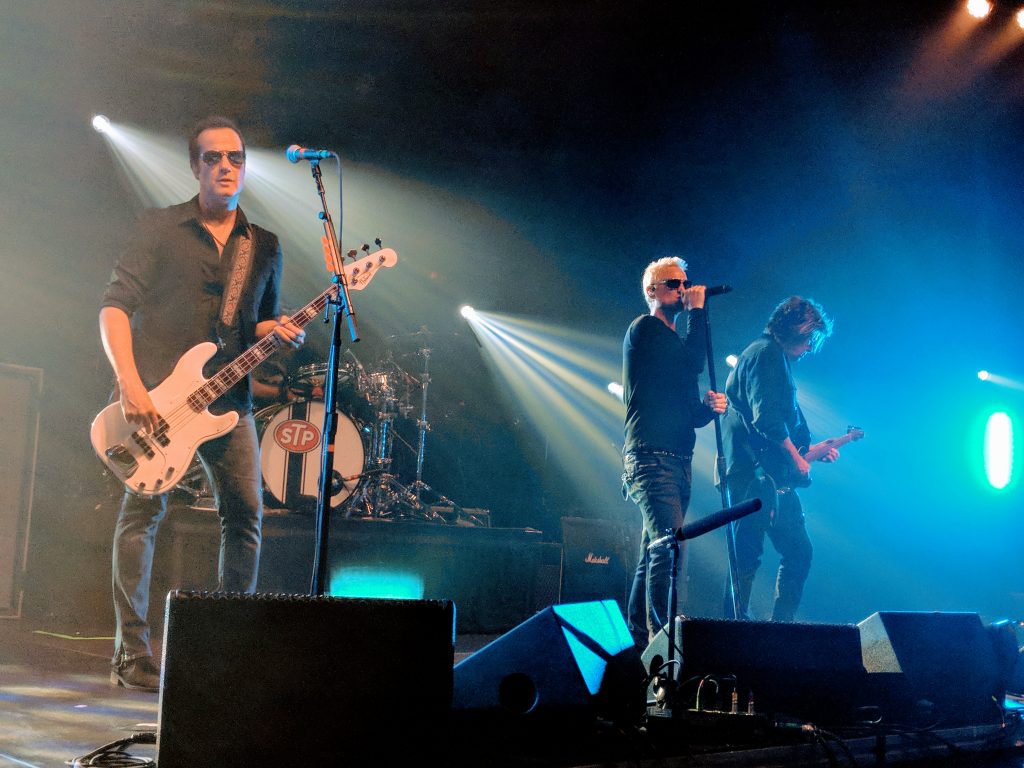 There’s a saying creative types have coined to describe a seemingly inexplicable confluence of circumstances that yield almost mystical results. They call it “lightning in a bottle.”

In a cruel twist of fate, any given musician or band has about the same odds of “making it” in the music biz as they would, say, to be physically struck by actual lightning.

But to have a second iteration of a “made” band enjoy continued success? That has to rank somewhere on the odds table next to getting struck by lightning WHILE walking out of the lottery office after cashing in your winning Powerball ticket.

And that’s exactly what San Diego’s Stone Temple Pilots had accomplished in a nearly three decade career that saw original frontman Scott Weiland replaced by Linkin Park’s Chester Bennington in 2013 … followed by the untimely demise of both Weiland in 2015 and Bennington in July of last year.

Now, the brotherhood battery of bassist Robert DeLeo and guitarist Dean DeLeo could have easily retired Stone Temple Pilots to the hangar after such a traumatic turn of events. In fact, they have already launched two other projects in years past – both reportedly fueled by the headaches generated from Weiland’s substance abuse woes. In 1997, it was Talk Show with STP drummer Eric Kretz in tow and one Dave Coutts of the Long Beach, California, band Ten Inch Men at the helm. In 2006, the brothers tapped Filter frontman Richard Patrick and percussionist Ray Luzier for what would also prove be another self-titled one-off, Army of Anyone.

But after an exhaustive search that was reportedly devoid of any chronological or geographic boundaries, the band has opted to go for the “three-peat” and continue with moniker they rode in on. Rarefied rock air for sure, as few have even attempted the dreaded third frontman — and even fewer have been successful at it. (Need we remind everyone again of the great Gary Cherone/Van Halen debacle of 1998?). Early critiques of the new STP’s scant live appearances and recently released, self-titled album indicated that the band’s “Gutt” instinct was correct — ex “X Factor” contestant Jeff Gutt could pull off the “Plush” catalog of hits AND usher the band into a new era.

On a recent, hazy evening at Wallingford, Connecticut’s Oakdale Theater, some 5,000+ turned up on a Sunday night to witness the third coming for themselves.

What they found was a frontman who could reliably shift gears from sweet falsetto to rock howl and punk growl in much the same fashion as his STP predecessor Scott Weiland without ever being a cliche himself.

Perhaps spurred by the powerhouse vocals they had been lacking in recent years, the band also upped the audio ante as they throttled through proven arena rockers like show opener “Wicked Garden,” “Vasoline,” and “Dead and Bloated,” as well as chestnuts including  “Glide” and “Sex and Violence,” the last two both from 1999’s No. 4 album.

Further evidence of Gutt’s ability to carry the night on his own merit came in his performance of the new material he helped pen — “Middle of Nowhere,” the mainstream rock radio charting “Meadow,” “Finest Hour,” “Six Eight,” and “Roll Me Under.” Where normally new tunes shoe-horned into a live show by a band that has a bonafide boatload of proven classics triggers breaks to the bathroom, these fledgling offerings stood shoulder-to-shoulder with the back catalog giants.

That’s not to say the band still didn’t celebrate its storied past member.

“This next one is … for a friend,” Dean offered in a thinly veiled homage to Weiland that signaled “Atlanta,” a haunting — though relatively obscure tune that many have deemed the original frontman’s finest vocal performance.

“When Jeff came to us, he came in and this was the first song he wanted to do,” Robert would later say of the fist pumper “Piece of Pie.” “And I was like really? Piece of Pie? It’s like that, huh? This is the stuff we are going to be able to do? Well let’s go!”

Perhaps the most overt, torch-passing moment of the evening came in show closer “Trippin’ on a Hole in a Paper Heart,” however, with Gutt standing on the monitors in Weiland-esque fashion, pumping his chest while leading the audience through the lyric “I’m not dead and I’m not for sale.”

It was a powerful image that seemed to solidify the fact that while yes, the beloved man who actually wrote that lyric is in fact, now, deceased, Jeff Gutt is alive and here to captain your Stone Temple Pilots. And not only are you in good hands … he’s just shut off the fasten seatbelt sign and dishing out drink coupons, so enjoy the ride.

Send your questions, comments and music news to garycarra@aol.com.