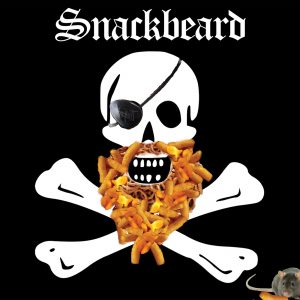 According to a passage in his novel “Redburn,” no less an authority on seafaring life than Herman Melville states, “It is a great thing in a sailor to know how to sing well.”

For, he explains, those at sea who are blessed with a talented voice may help raise the spirits of a lagging crew, and make even the most drudging of work feel less monotonous. Could, though, such a songster on a ship even lead one to buried treasure?

To test said hypothesis, enter into this swashbuckling tradition the figure of Snackbeard the pirate (aka former Valley Advocate writer and editor Tom Sturm), who embarks on such a quest on a self-titled children’s music album, which is available now.

Consisting of 10 tracks that merge a narrated tale of adventure on the high seas with songs that give life to such topics as getting a ship ready to sail, and what happens when someone is forced to walk the plank, the album is not short on storytelling moxy.

The record’s opening cut sets the scene with a backdrop of sounds that include water lapping against the shore and gulls soaring overhead. Snackbeard/ Sturm provides a fine voice for the proceedings, consisting of equal parts wizened sea scallywag and cryptic storyteller, who alludes to interactions with a “harebrained” scientist as well as informing listeners of his own intriguing backstory.

The music doesn’t start until track two, where the speedy “Ship Shape” blurs by like an old LP played at 78 rpm instead of the recommended 33 and 1/3. The sub-two minute blast also introduces a plethora of additional voices that paint a picture of a merry band of scoundrels running around decks trimming sails, tightening lines, and trying to obey the captain’s orders.

“Salmagundi,” the next track, features perhaps the album’s most appropriate subject matter – food. Described as consisting of “a bit of this and that,” the dish itself may be a mystery, but there’s no mistaking the tune’s Caribbean rhythm with acoustic guitar strummed over what sounds like distant steel drums.

Variety in instrumentation and overall story keep Snackbeard an engaging listen. As events progress from a treasure hunt to mutiny and even to an encounter with a dreaded kraken, the music changes too. Violin and guitar fade away as distorted riffs and tolling bells emerge like subterranean sea monsters crawling up from the ocean floor. Even the many voices in the mix evolve from upbeat pirates “yo ho hoing” to ghastly specters on a ghost ship cackling and chanting.

Listeners be warned. If your kiddo has already sat through all of Disney’s “Pirates of the Caribbean” franchise, then nary an eye will probably be batted at the ominous sounds that emanate from some of Snackbeard’s darker tracks. But, the tiniest of audience members may have a question or two for mom and dad regarding bilge rats, shanks, and just what happens down in Davy Jones’ Locker.

Parents may even enjoy Snackbeard as much as their children. The album is filled with references to pirate lore and history. So many details are included in fact that repeat listens are quite rewarding as opposed to the grating irritation that can come from hearing certain kid favorites ad nauseam. Sturm’s life as a writer shines through with a veritable treasure trove of a vocabulary sprinkled throughout, providing ample terms to research together, maybe even for a pirate-themed spelling bee or two.

Despite the record’s replay value, what Snackbeard begs for is a sequel. A bunch of adventure is crammed into 40 minutes, and many grateful parents will no doubt applaud the tales for not going on too long or overstaying their welcome, but by the time events conclude, sans treasure and the pillaging of even a single merchant ship, the ending of the story arrives sooner than expected.

Will the Crimson Crest sail again? What too of the captain’s daughter? Has the kraken disappeared for good? Fans will just have to wait until Snackbeard takes to the waves again in search of gold and goodies to eat to find out the answers.