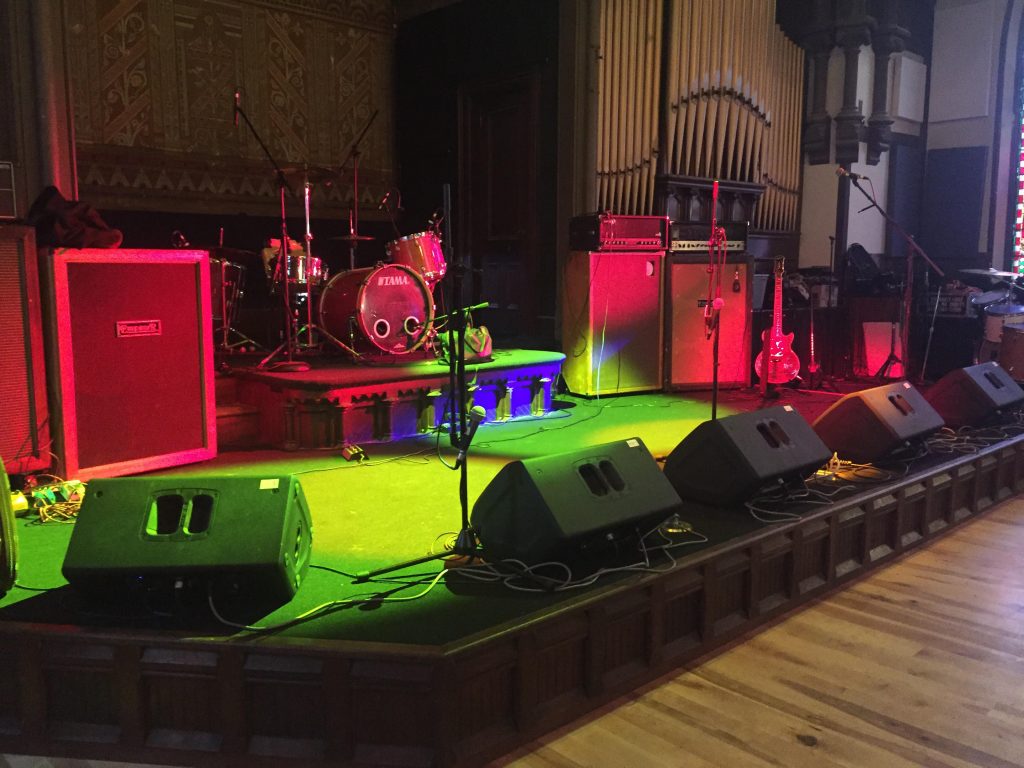 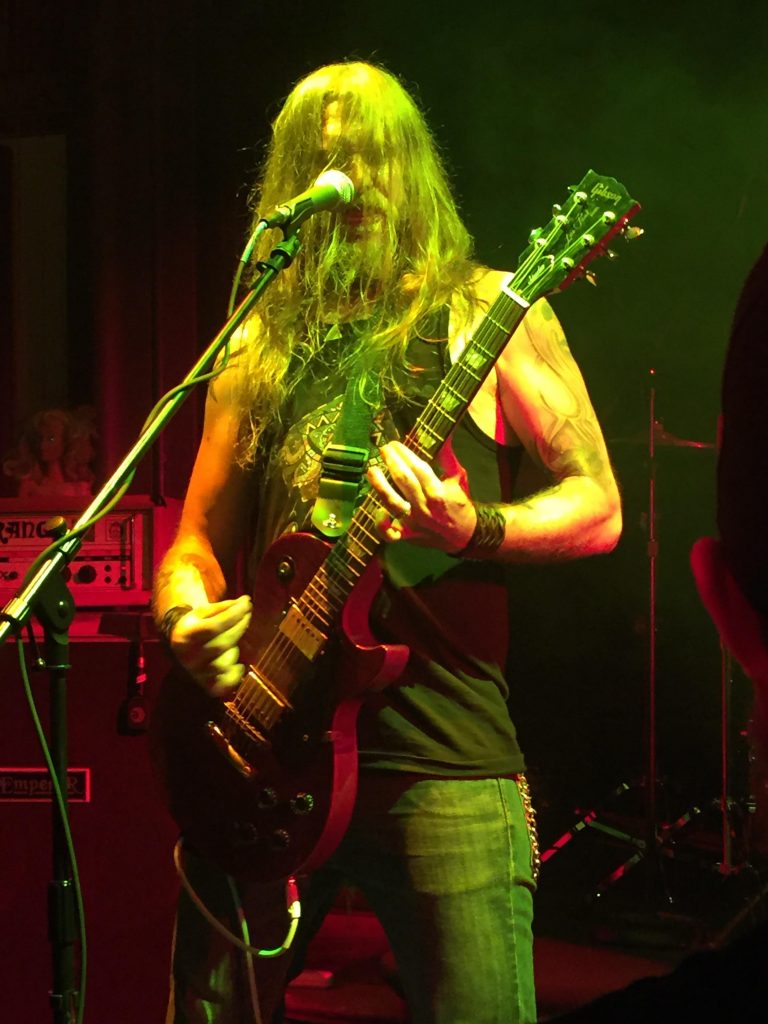 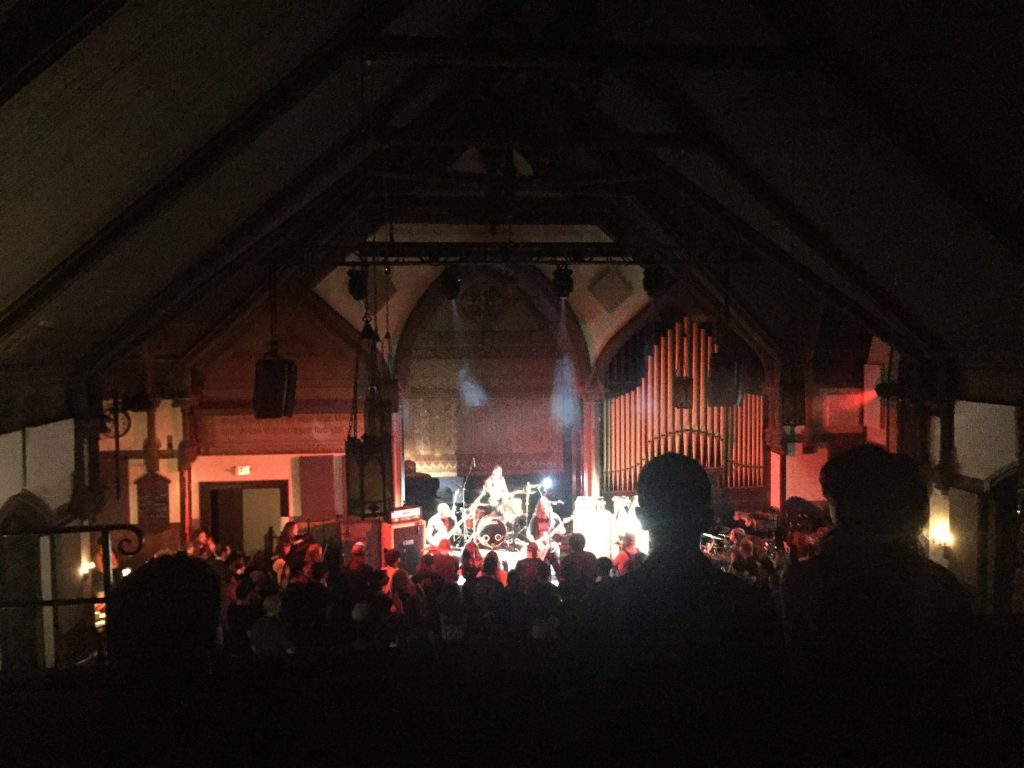 Churches are the most beautiful architectural buildings, in my opinion. I’m not a religious person, so when I do get a chance to enter these beauties, it’s because of a wedding or a funeral and I just look forward to leaving — the religion part of it just makes me uncomfortable. But on this marvelous day, I got to enjoy the beauty in the environment that makes me the most comfortable — at a show. 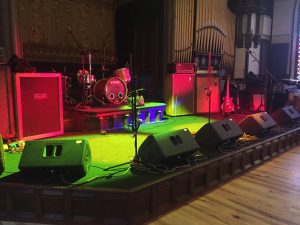 The Stone Church in downtown Brattleboro, Vermont, was the home for the 3rd Annual Stoned To Death fest put on by Promotorhead Entertainment. The festival features local, local-ish, and traveling bands in specific sub genres of metal. The building that was once the All Saints Unitarian Church is now a unique live music venue.

Walking up the stairs to the ivy laced stone church, I was excited to finally see the insides of this place. I paid my cover charge, got my hand stamp and bracelet, and opened the doors. It was exactly what you’d expect a church to look like, still with the fixtures and scriptures on the wall and the stained glass throughout. But the floor was empty — no pews here. And wait, what do I see? A bar. I ventured over and order a can of Narragansett and gawked at the beauty before the show started.

New Hampshire’s Boghaunter kicked the fest off in droning doom metal fashion. The drummer was also the singer, which I always admire. The droning tunes of the guitar and bass combed into the heavy intensity of the drum beats and screams — perfect band to open up the day of impending doom.

Vermont’s KiefCatcher continued the droned out tones with their stoner metal. Sabbath came to mind a few times. The singer dressed in a red jumpsuit and occasionally sat crossed-legged on stage. I saw him bouncing around the floor to the other bands throughout the night in that same attire. 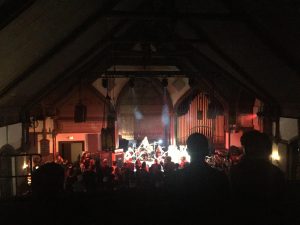 The view from the balcony. Jennifer Levesque photo

Chained to the Bottom of the Ocean sounds like a name of a poem. I have no idea where the band got that name but if it was a poem, the poem is pure brutality. Springfield, Massachusetts’ sludge doomers blew my mind. The energic members got the crowd moving while the doomy sounds blended perfectly with the singer’s gut-wrenching screams. I dig. I bought their album on vinyl.

I had to go feed the meter during New Hampshire’s Sassu Wunnu’s set and as I was walking back up the stairs to the church I heard their “infinite density blackened funeral doom.” Connecticut’s Buzzard Canyon changed it up a bit with a more rockish vibe along with the first female vocals of the fest. The hint of stoner was still present in the air. Then bam! Vermont’s Abaddon brought back the heavy with their black metal under red tinted lights.

The light from the sunny afternoon lit up the stained glass windows which also picked up on the neon lights from the stage — making Jesus and his crew shine even brighter.

A week before this event, an unexpected and tragic loss to the metal family — and the current Stoned To Death III lineup — occurred. Beloved bassist, Joe Magrone from Western Mass’s metal guru’s, Problem With Dragons, died at the age of only 38. I’m a huge admirer of the band and will always remember Joe’s badass stance playing his bass in heavy domination while wearing sunglasses. I kept thinking of him and his band mates throughout the night. They were supposed to play this event and were promoting it just mere days before his passing. Cheers to Joe <3 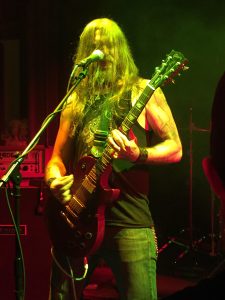 The singer from Black Pyramid of Northampton. Jennifer Levesque photo

Moving into the evening part of the day, New Jersey’s Wasted Theory brought their southern-style weed rock to the stage. Then last minute addition, Boston’s Conclave, shoved the sludge back into our faces. Conclave’s drummer stayed in the holy seat for the next set with dual female stringsters, Worcester’s doomy Benthic Realm. The three-piece slay with female haunting vocals over guitar solos and doomy bass and drum beats.

I walked up the spiral staircase to what was once the choir seats, and sat my ass down for Worcester’s heavy Black Death metalists, Desolate, and viewed from above. You can see more up higher. The detail in the ceiling, the lantern-style light fixtures. The way the organ glows and looks like it’s just wanting to be played.

I stayed up above for Kentucky’s heavy sludge Stonecutters. Mosh pits were erupting and it was cool to see them from up high with the flashing neon lights. One of the guitarists likes to say “fuck yeah” after pretty much every song, so the remark had echoed as a response from the audience. The drummer had some sort of a bell on his drum kit that he’d hit with the cymbals, which made for a unique sound. They sped up the pace for the night just in time for the ending.

Western Mass’s own Black Pyramid ended the day of impending doom. Their “psychedelic war metal” pierced through us for one more time before we all went home with that familiar ringing in our ears, and fulfillment of metal.