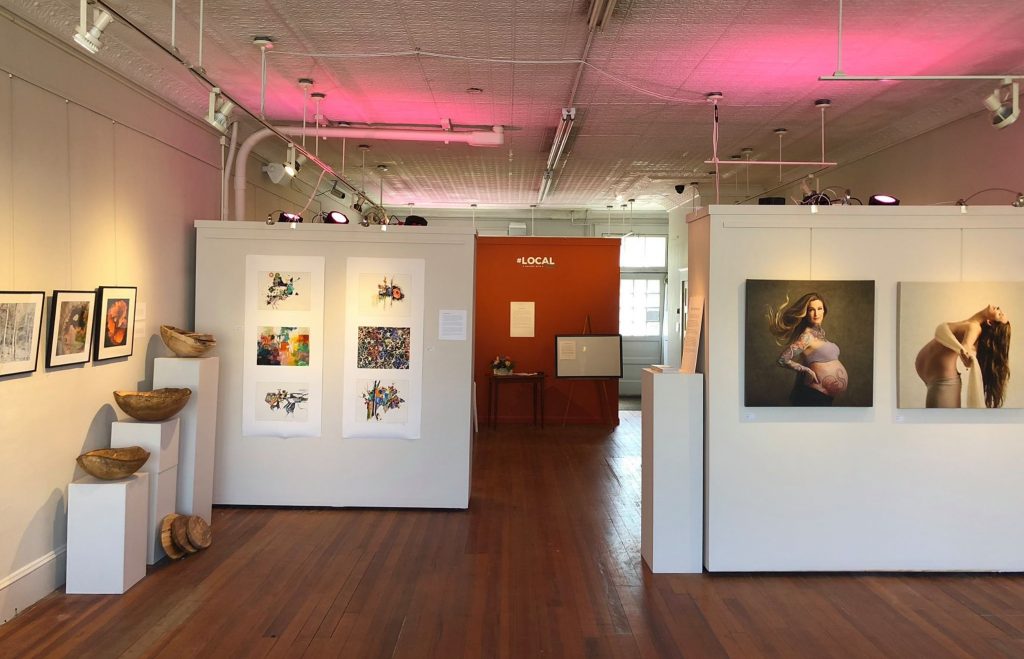 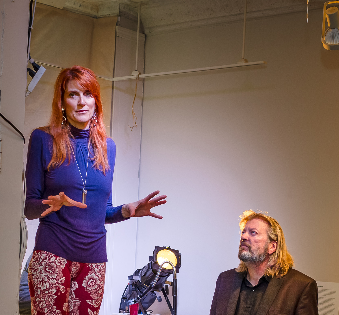 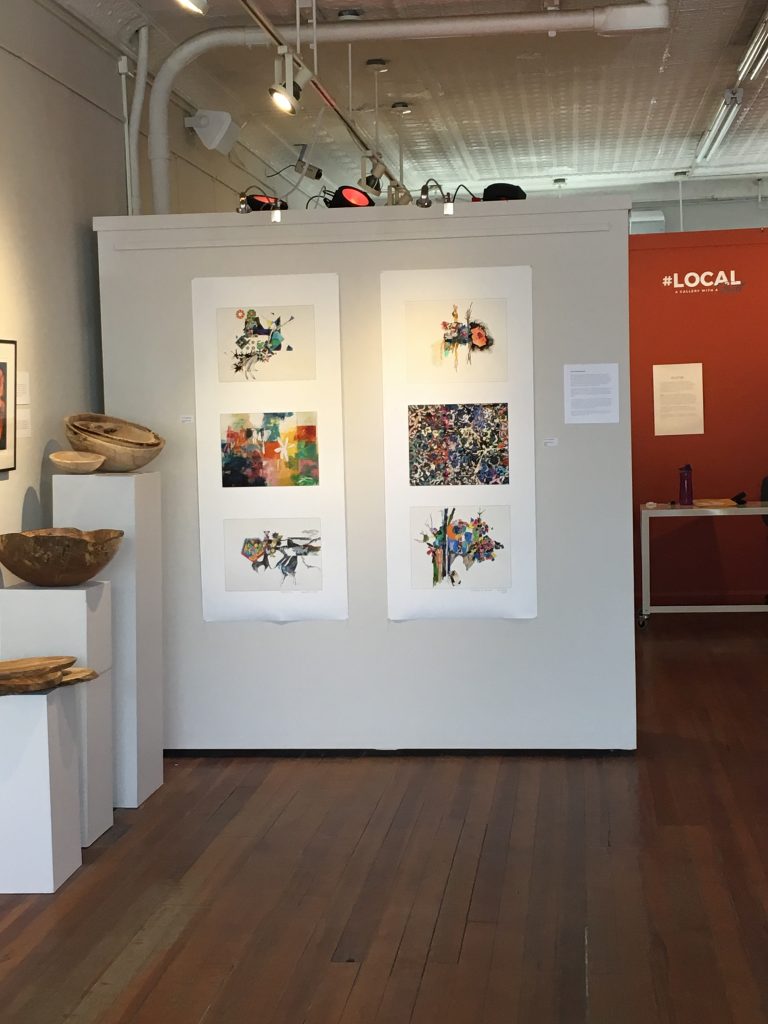 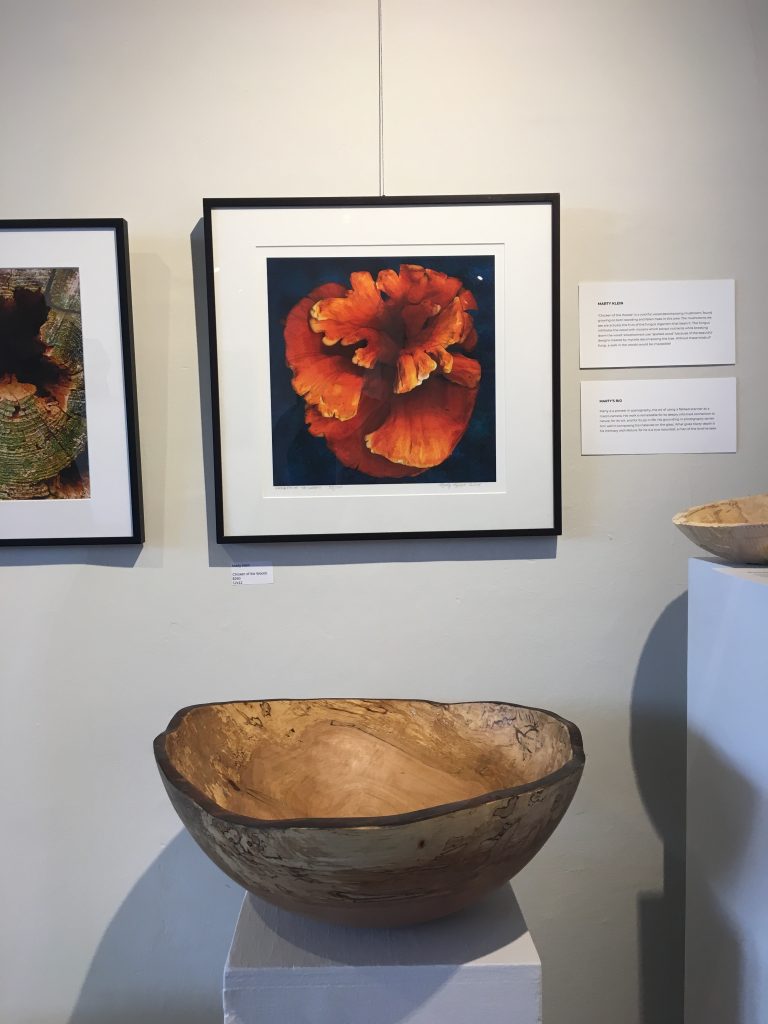 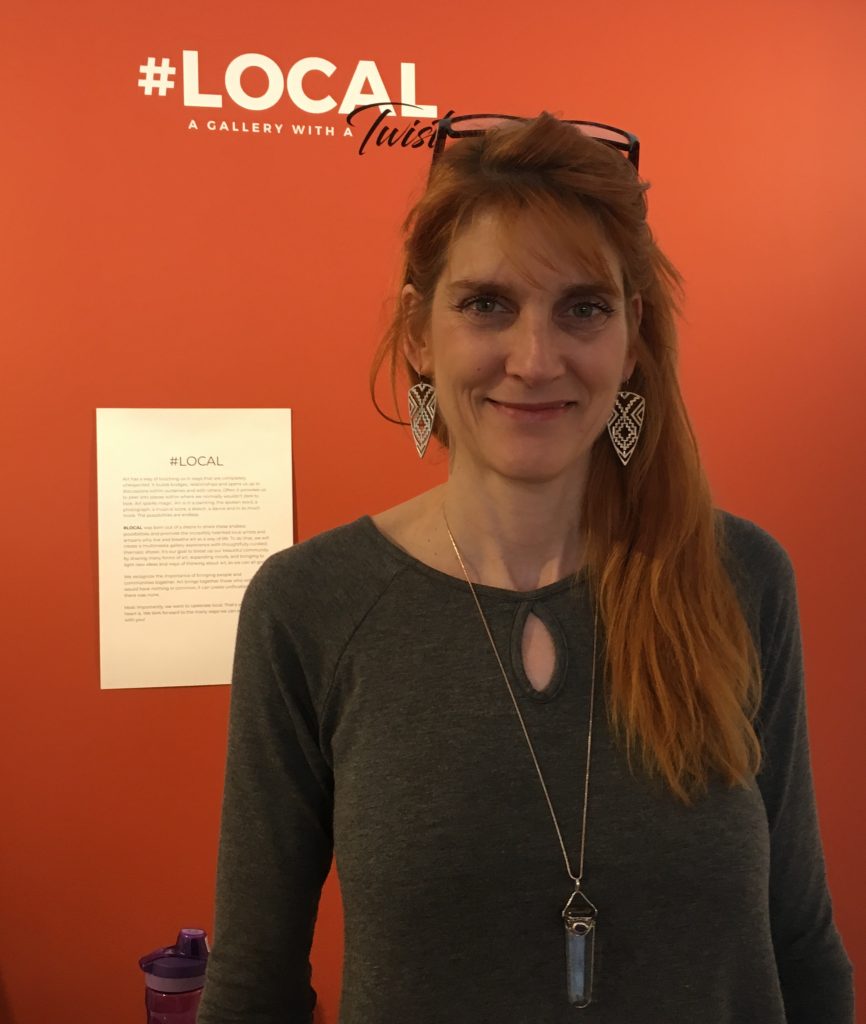 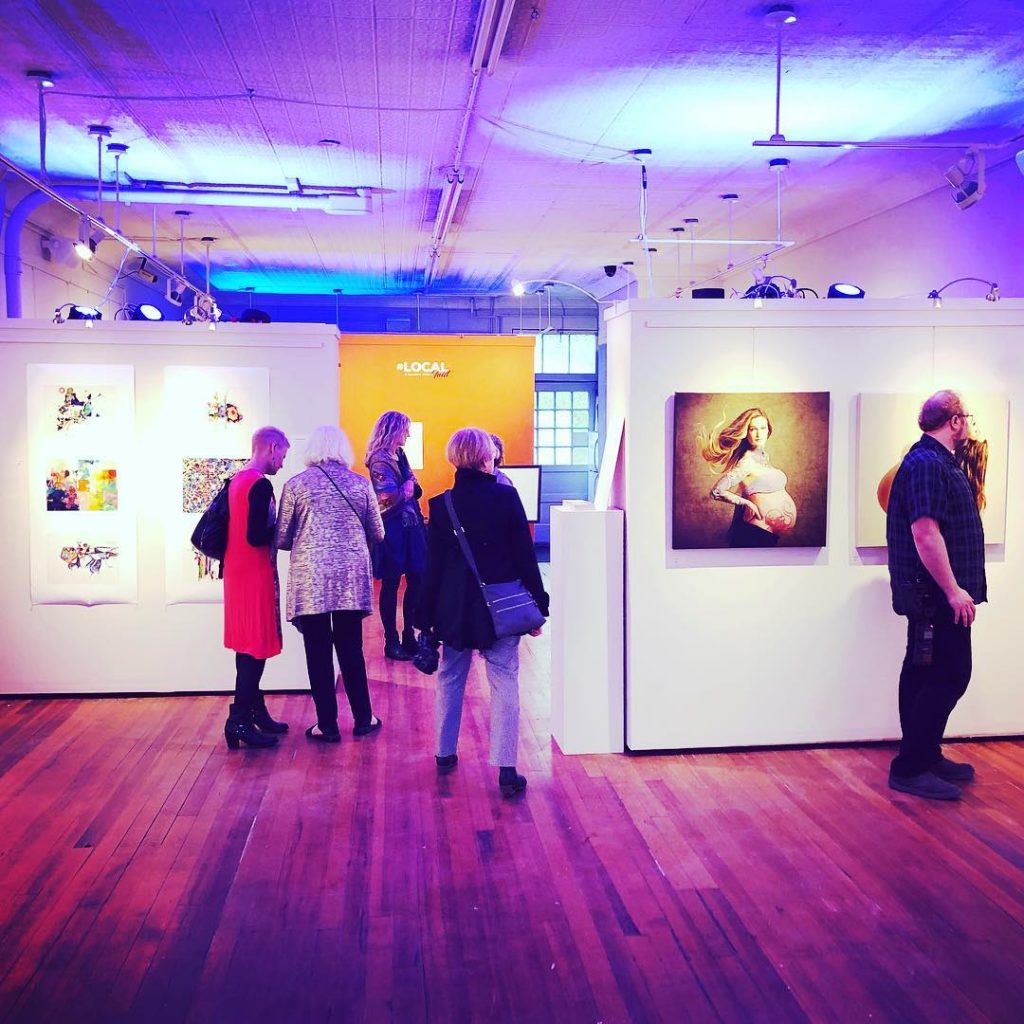 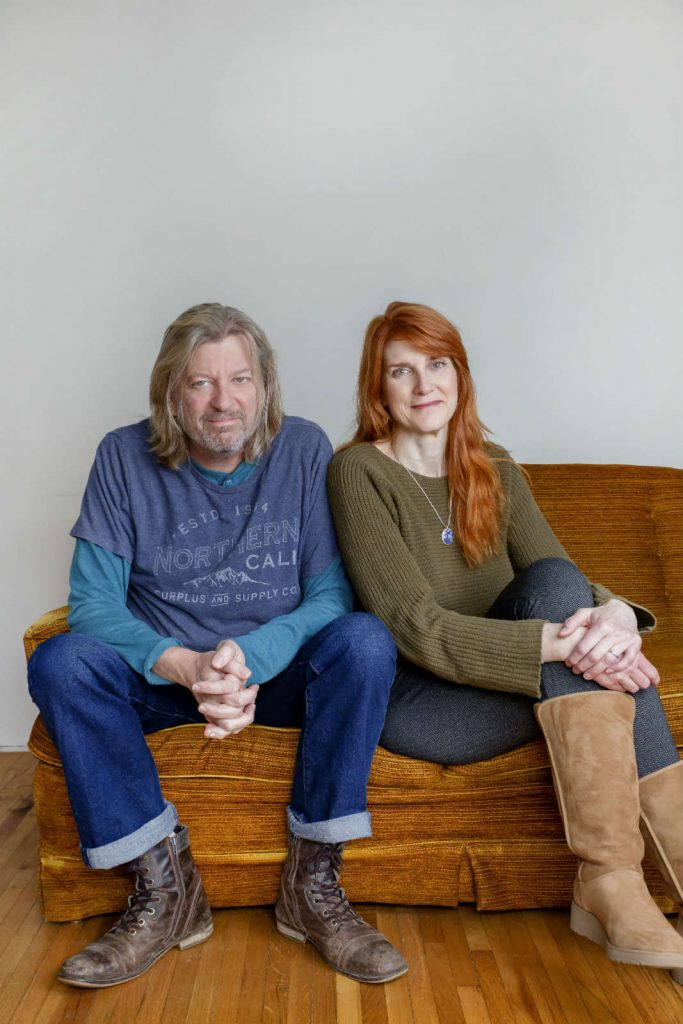 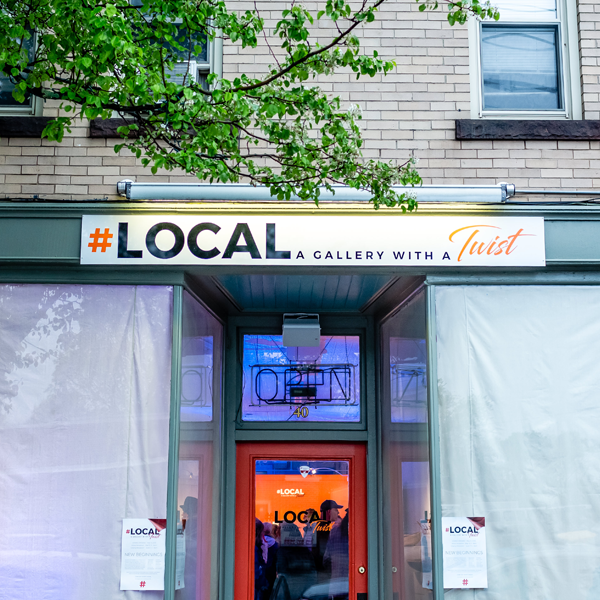 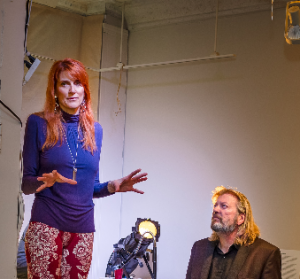 Earlier this month Lennie and Elizabeth Applequist opened #LOCAL: A Gallery with a Twist on Cottage Street in Easthampton, happily joining the eclectic array of shops, galleries, restaurants, and watering holes that make Easthampton center special.

In 2013 the Applequists, a decidedly cosmopolitan couple most recently from California (by way of the rest of the globe), settled in Elizabeth’s beloved hometown of Easthampton.  She had left in 1982 and a lot had changed.

“When I came back, Lennie and I became involved in the community,” Elizabeth Applequist remembers. I was so amazed!  It seemed to be such a drastic change from when I had left.  I could clearly see that one of the things that had had the most impact on the town … was the growing art community.”

Indeed, Easthampton had become a vibrant arts friendly community nestled at the foot of the venerable Mount Tom. The town had become a city, and over the years it had gradually moved out of shadow of its big sister Northampton. It had also developed its own unique funky vibe, which attracted artists and artisan businesses.

The same year the Applequists arrived, the city capitalized on this organic cultural transformation and applied for cultural district designation with the Mass Cultural Council (MCC), and in July 2013 the Cottage Street Cultural District (CSCD) was established in Easthampton.

The MCC, a Boston based state funded council, describes a cultural district as an area of a city or town with a concentration of cultural facilities and public amenities like museums and galleries. Moreover, “cultural districts shall attract artists and cultural enterprises to a community … preserve and reuse historic buildings … and foster local cultural development.”

Although Easthampton City Arts (ECA) had been capably leading the charge for establishing more artist spaces in the city for nearly a decade, a cultural district designation by the state was a real coup for the city’s art and culture community. Cultural designation allowed the city access to a range of grant programs and services, as well as a means to increase tourism through marketing.

In 2015 the Applequists opened Cider House Media, a successful full service website design and management boutique, and the couple were busily embracing life and the arts in Easthampton.

Art had always been something Lennie and Elizabeth loved, and they wanted to be a part of the action; the Cottage Street Cultural District was another way the arts were becoming an integral part of the city.

One of the few limitations of the cultural district designation, however, is its geographic boundaries; an area’s walkability is essential for it to earn a cultural district designation. So the CSCD’s boundaries begin and end at Cottage Street. If a business falls outside of the district, it cannot be a member. Cider House Media is located at 28 Northampton Street and is a full 20 minute walk from outside of the CSCD.

That didn’t stop the Applequists from taking part in the arts community, however. 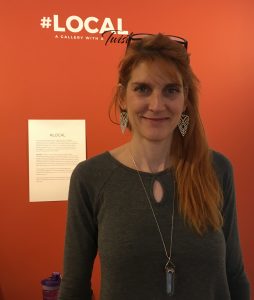 “Our office has been a venue for Art Walk,” Elizabeth Applequist explains. “Art Walk was a chance for … Cider House to play our small part in bringing art to our local community ….” she says.

The Applequists created the Cider House Gallery which rotated shows monthly and held the artist’s reception during the night of ECA’s Art Walk which is the second Saturday of every month.

That, however, wasn’t enough for these avid art lovers. Elizabeth Appelquist says, “we thought it would be really cool to have a gallery on Cottage Street because it’s in the cultural arts district.”

And through a couple of serendipitous events, the gallery was established. “Our landlord kind of casually asked us if we had any ideas for this space at 40 Cottage Street. We were like…’yeah!’” she says. “Within 24 hours we had a name; I was out walking my dog and I just thought Hashtag LOCAL!”

The Applequists had a clear vision for their gallery, and they’ve managed to create a gorgeous exhibition space that’s well worth the visit. Tucked in toward the end of Cottage Street, #LOCAL is peculiarly polite and urbane, a wonderful respite in a small town whose agrarian roots are still noticeable parts of its communal fabric.

#LOCAL Gallery is a breath of fresh air; the energy of the space is bright and positive and remarkably comfortable, but then it’s not surprising because Elizabeth Applequist, who sometimes minds the shop, is affable, bright, and positive.

It’s evident that she and Lennie (a California native who worked as an assistant director and crew on scores of Hollywood films) have fallen in love with the town and are proud to serve it and to be a part of it. 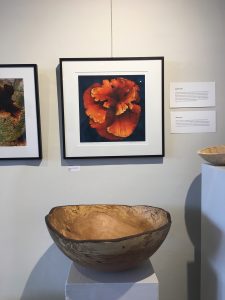 “We wanted to do a contemporary fine arts gallery,” she says “we’ll host monthly curated theme shows.” Everybody has their own impression of what they’re looking at,” Applequist says, “but there’s an underlying theme, and I think that’s the most amazing thing about art.”

Those themes allow for collaboration among artists.  The Applequists, along with photographer Marty Klein, have a series of beautiful photographs that celebrate the “upcycle of life.”  The series includes Klein’s image of a mushroom which becomes an element of decaying or spalted wood.

Beneath the images is a small collection of Spencer Peterman wooden bowls made of spalted wood which reflect Klein’s photograph.  Spencer Peterman, located in Gill, designs high end wooden bowls and accessories and calls this line of products “upcycling,”as well. It’s that kind of connectedness the Applequists enjoy. Finding commonalities among people and things seems to be a part of their core mission.

As for the artist selection, Applequist says, “We only use artists local to Massachusetts, but the first time I put a call out, nobody responded.” So she went out and sought artists for the space. “I just knew what styles I wanted.”

The inaugural show is titled New Beginnings — apropos since the gallery just opened on May 12. “I thought of spring and babies. I just found artists and there was this amazing synergy and everything just fell into place.”

The opening reception coincided with Easthampton’s Art Walk. And in keeping with their gallery’s name, they used local businesses to provide the reception’s accoutrements. “ We used the Botaniste for our flowers, and Corsello Butcheria for food. We’ll continue to use local restaurants for catering.”

The couple are also interested in providing the viewer a full sensory experience while at #LOCAL. They’ve installed special lighting that mimics the colors of the sky from morning to evening. Each phase creates a natural and calming ambiance.

As for sound, “we’ve created really cool playlists,” Elizabeth Applequist says. “We had a musician named Randy Collins for the opening night reception who played the kind of music that just really touches you and really moves you.”

The walls of the gallery are mobile, so no show will ever look the same. June’s exhibit, Easthampton, will have a completely different configuration.  The Applequists love the idea of keeping people in suspense. “What’s going to be next — that’s what we really wanted, a mystique. We want them wondering ‘what do they have up their sleeves next,’” she says. “That’s why we’re a gallery with a twist.” 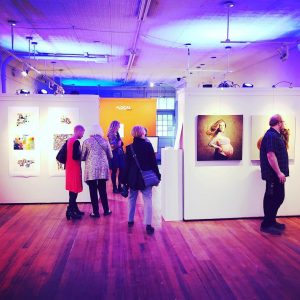 Photo courtesy of the Applequists

They also want to make the space a culturally dynamic hub. “We really want to activate the space during the month. Later in the year, I’m planning on having a seminar with Amy Wolff who is the queen of color. There’s a local musician who offered a documentary that he’s made, we’ll show that …  and painting classes.  We want to create a multimedia gallery experience.”

The possibilities are endless,” Elizabeth Applequist says. “I keep getting new ideas and when Lennie and I get together the ideas just kind of go crazy.”

Gallery shows are booked up to November, and they’re excited about what the future holds for the arts and for Easthampton.

“It’s our goal to boost up our beautiful community by sharing many forms of art,” #LOCAL’s mission statement reads. “Most importantly, we want to celebrate local. That’s where our heart is.”

Gina Beavers can be reached at gbeavers@valleyadvocate.com