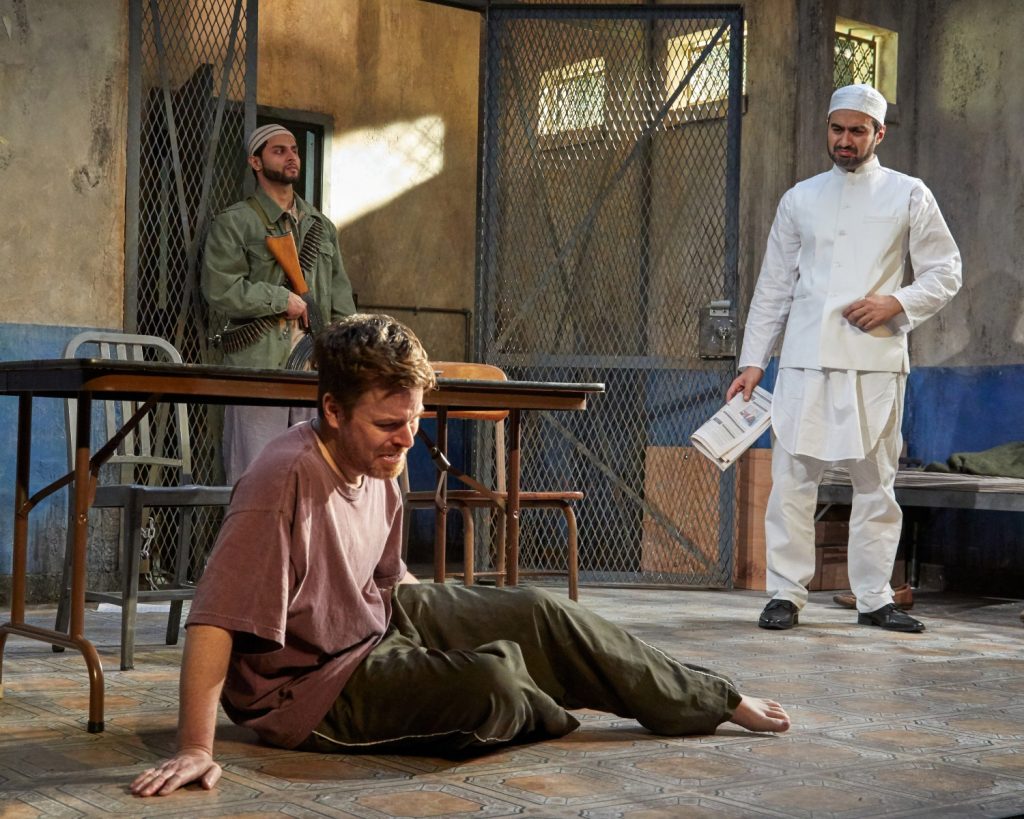 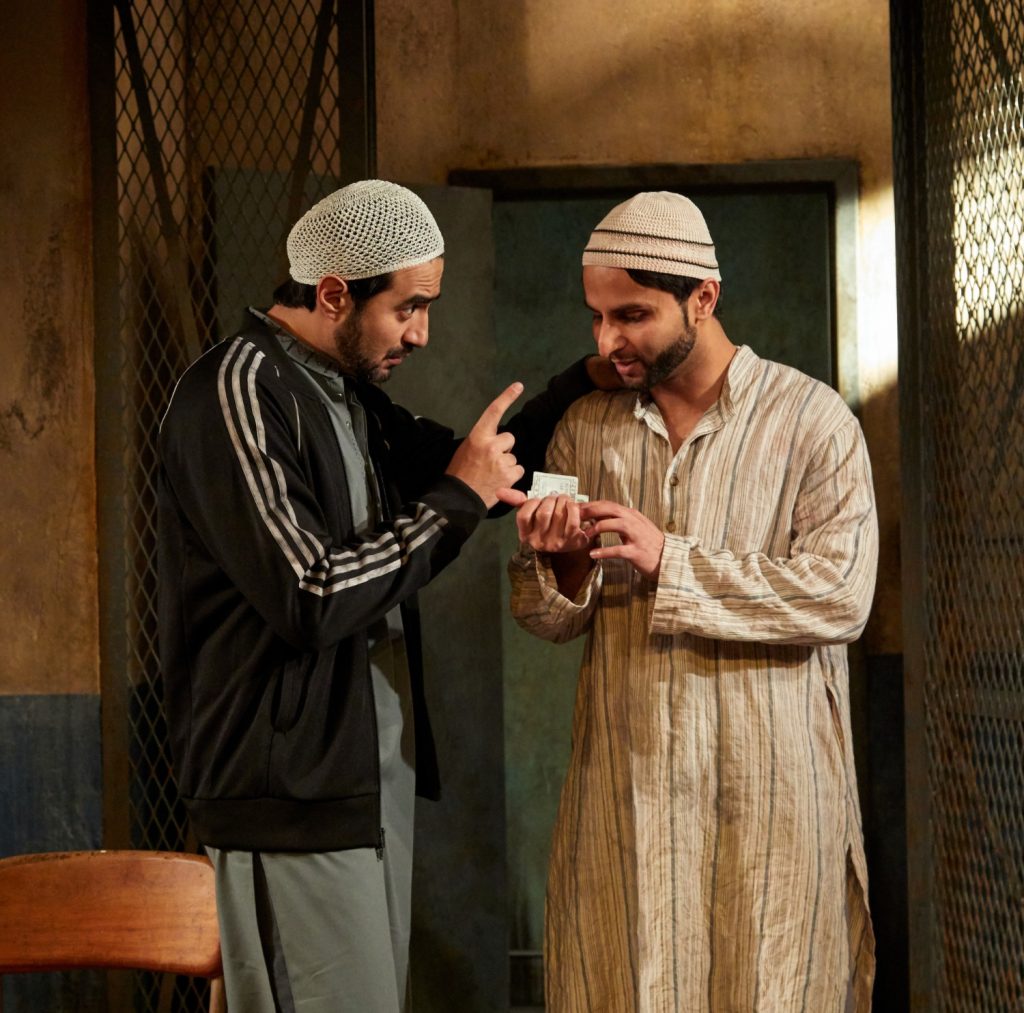 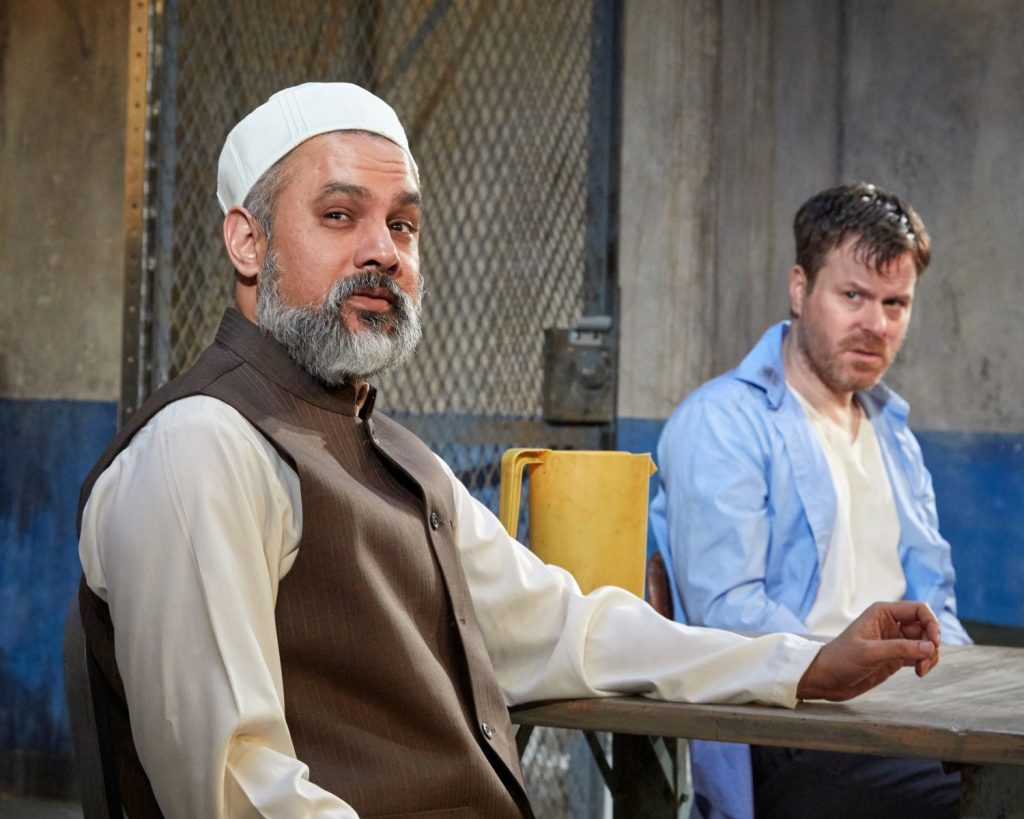 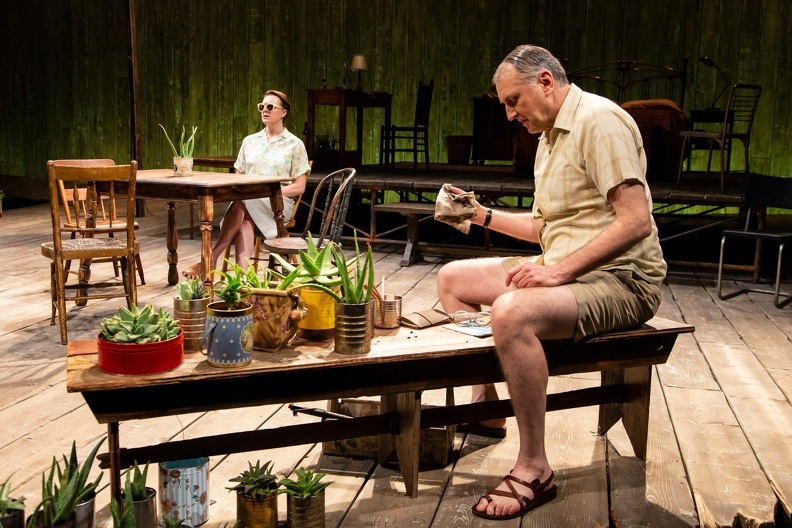 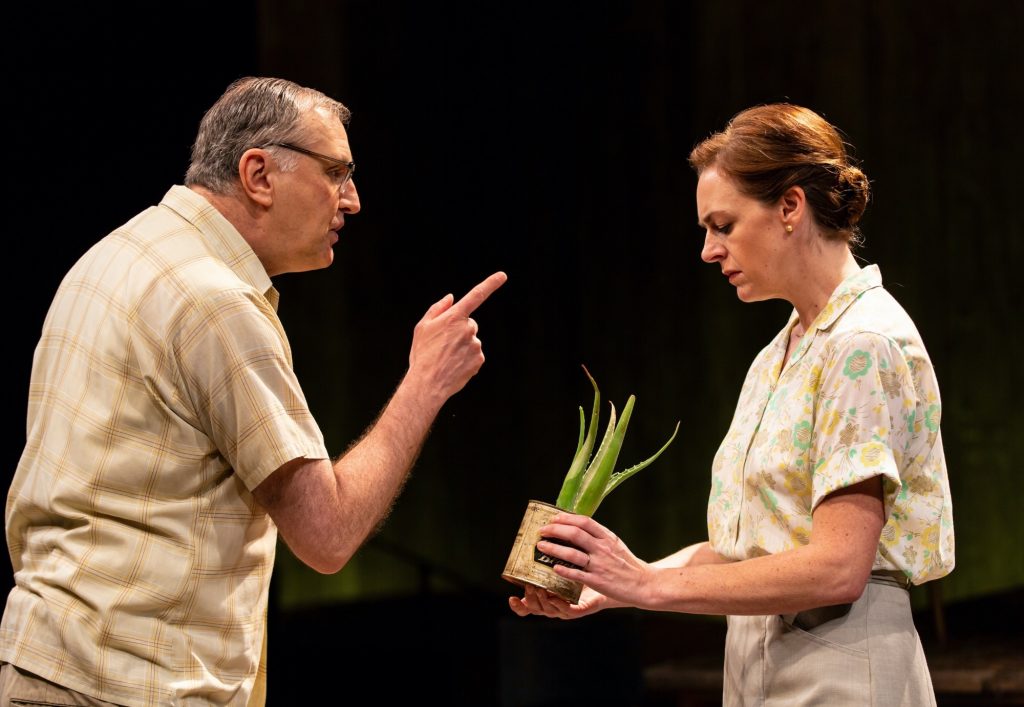 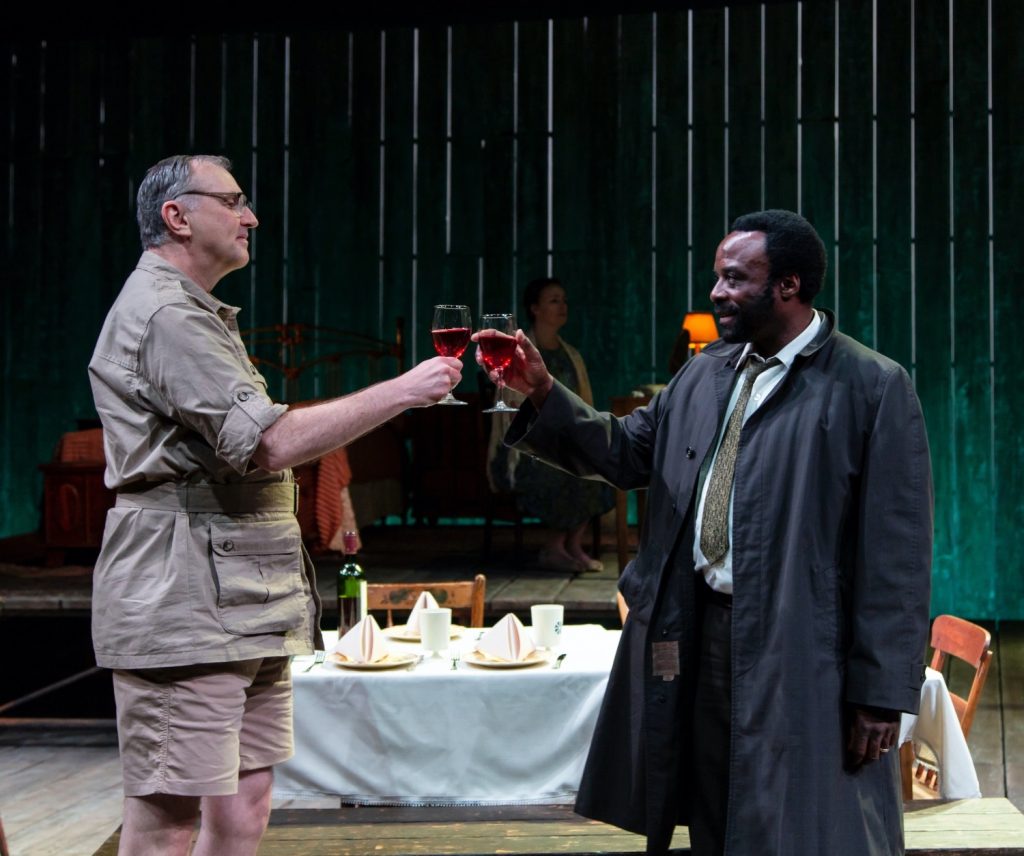 Two plays now running in Hartford are framed by resistance movements against political and economic oppression, and both carry weighty metaphors. At TheaterWorks through June 23, a lesson in global economics is tucked into a torn-from-the-headlines thriller, and at Hartford Stage through this weekend, a lesson in trust and betrayal is wrapped around a tenacious plant.

That plant is the aloe, the spiny green succulent that manages to survive and thrive in the most inhospitable soils. In A Lesson from Aloes, by the great South African advocate/playwright Athol Fugard, they symbolize the perseverance and resourcefulness that kept the country’s anti-Apartheid movement striving against all odds. 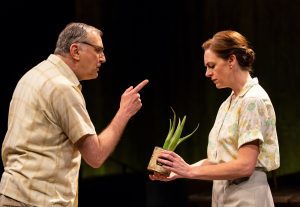 Aloes are an obsession of Piet Bezuidenhout, a quiet, poetry-quoting Afrikaner, a white man who has made common cause with the resistance against the racist regime. Some time ago, his activism attracted the notice of the Special Branch. Officers searched his home and found nothing incriminating, but confiscated and read the private diaries of his wife, Gladys. This violation led to a nervous breakdown and confinement in a “mental home,” from which she hasn’t recovered.

The third member of Fugard’s tense triangle is Piet’s friend Steve Daniels, the Coloured (mixed-race) man who inspired him to join the cause. Steve had been captured and imprisoned after a tip-off by an unknown member of their group, and Piet is the one suspected. So when Steve shows up for dinner things are understandably strained.

The play takes place on the spacious back patio and in the claustrophobic bedroom of a suburban house on the Eastern Cape. Dozens of aloe plants are ranged in pots and tin cans on Tim Mackabee’s wood-plank set, which is backed by a high forbidding wall, light seeping through the cracks. 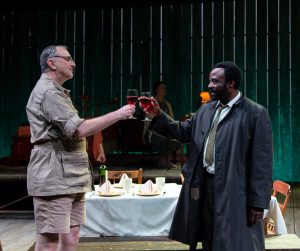 The lesson we are to take from the aloes is about survival and persistence in impossible conditions. But at its heart the play is all about suspicion and betrayal. My companion at the theater the other night commented, “There’s so much pain!” And indeed, all three characters are deeply wounded. Gladys can’t forgive Piet for not protecting her and the diary; Piet is heartsick at being rejected by his former comrades; Steve is being pushed into exile by the government.

In Darko Tresnjak’s emotionally charged production, Randall Newsome’s posture defines his affecting performance as Piet – hunched in a defensive stoop, grudgingly resigned to his wife’s illness and his own outcast status. Ariyon Bakare delivers the play’s most heartbreaking moments as Steve – high-energy and street-wise but damaged by the psychological torture he endured in custody and torn over his fractured relationship with Piet.

The standout performance is Andrus Nichols’ as Gladys. The high-strung character, given to paranoid outbursts, invites scenery-chewing, but in Nichols’ finely detailed rendition we glimpse emotions churning under the surface long before they explode.

The play’s conflicted loyalties are reflected in the characters’ ethnicities within South Africa’s ethnic definitions, and revealed in their speech. Piet’s Afrikaans accent blends into both Gladys’ and Steve’s voices – Gladys, who’s of English stock, mixing in a tony Britishness, and Steve overlaying his black African cadence with flat Afrikaans vowels. While Nichols and Bakare deftly master their hybrid dialects, Newsome has so much trouble with his Afrikaans inflections that he’s sometimes unintelligible.

A Lesson from Aloes, based closely on the actual experiences of friends of the playwright, was first performed in 1978 but was begun in the early ’60s at the time of the government’s harshest repression of dissident opposition. Against this backdrop, the metaphor of the plucky aloes serves as the only ray of hope in the play’s bleak landscape.

The Invisible Hand, at TheaterWorks, is not so much a political as an economic thriller. Nick, an American financial analyst working in Pakistan for Citibank, is kidnapped by a revolutionary group and held against a ransom of $10 million, which neither his employer nor his government is about to fork over. So he offers his captors a deal. He will play the stock and money markets for them, to swell their coffers and buy his release. 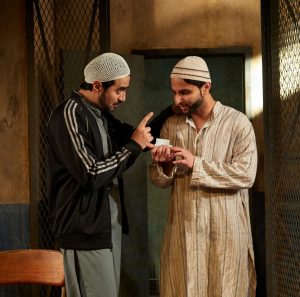 The title refers to free-marketeers’ faith that economies will self-regulate according to the laws of supply and demand (a faith more ideological than rational, as the Great Recession decisively demonstrated). But it also refers, I think, to the ever-tightening grip of global capitalism, which the kidnappers blame for oppressing the many while enriching the few, in Pakistan as elsewhere.

The play, by Ayad Akhtar, author of the Pulitzer-winning Disgraced, is given a sure-handed production by David Kennedy, who lets moments of astringent humor fly without ever letting up on the tension. Kristen Robinson’s set is Nick’s cell, a drab, cement-walled basement room pierced by dusty sunlight. (Matthew Richards designed the lighting for both this and Aloes.)

Above him is the white-robed cleric Imam Saleem, as poised and understated as Bashir is volatile. Unlike the Islamist radicals who make their points with car bombs, they are not terrorists, he and Bashir insist. “They call themselves Muslims? They’re animals.” Their mission isn’t theological, but practical – to improve the material circumstances of the people who suffer under their country’s corrupt, American-backed government. The money that Nick raises for them via skillful market manipulation is tagged for community projects. 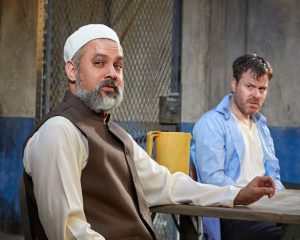 But, as they say, money is power. And power corrupts. Once the cash starts to flow into the group’s clandestine accounts, power dynamics and hierarchies shift and fray. Nick recognizes “what money does to people. You get a taste, you just want more.”

Anand Bhatt’s Dar is often blank-faced, a good heart contesting with a well-founded fear of authority. As Nick, Eric Bryant balances on the knife-edge between audacity and terror as he navigates a precarious, ever-shifting position. On opening night Rajesh Bose took a while to find his poise as the Imam, but soon settled into the man’s arrogant sense of himself and his power.

Bashir is the play’s most complex and interesting character, and Fajer Kaisi delivers its most compelling performance. Bashir is a man of high intelligence and high dudgeon, quick to anger but quick-witted and quick to learn. Act One climaxes with a terrifying test of loyalties, Act Two in a chillingly fitting turnabout. In both these moments, in Kaisi’s mesmerizing portrayal, we see a man who profits from experience – whose hand, in fact, works invisibly to surpass his teachers.

A Lesson from Aloes photos by T. Charles Erickson
The Invisible Hand photos by Lanny Nagler