Monte Belmonte Wines: Is the wine world ready for wine in a can? 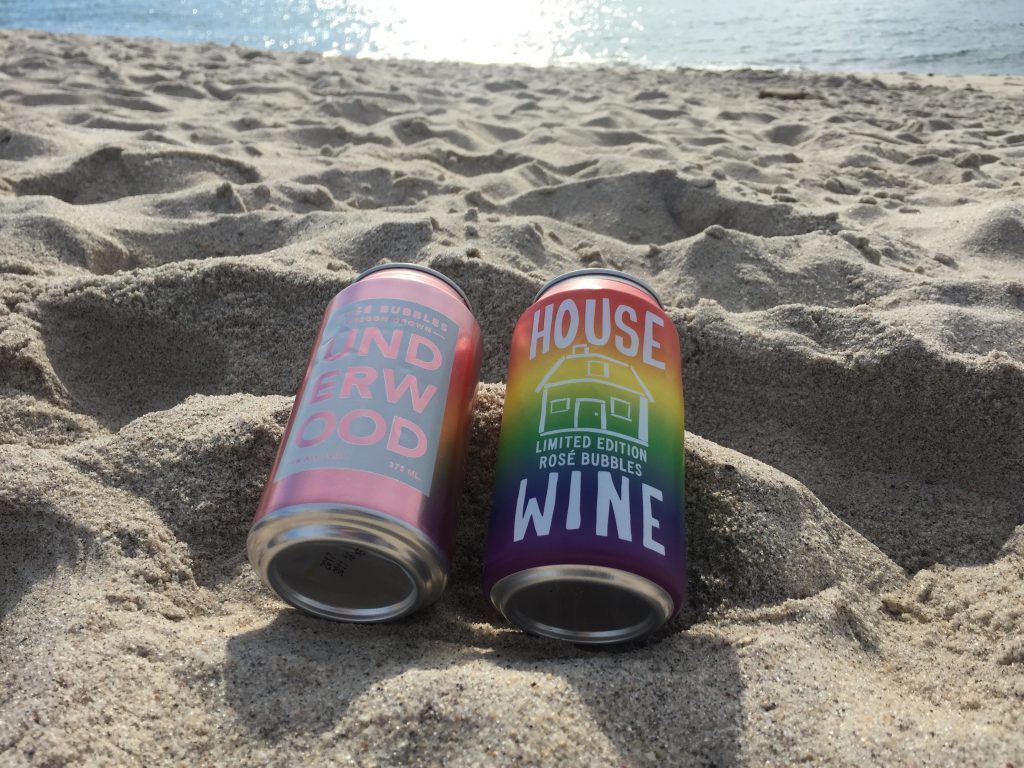 I am a proponent of Massachusetts becoming an open carry state. Not with guns. But with alcoholic beverages.

Unless you happen to find yourself on the Buckland side of Shelburne Falls, where you are permitted to carry an open container of alcohol on the street, you might find yourself in trouble if you decide to imbibe outside — say, at one of our fine Massachusetts beaches.

You could choose to obey posted laws about where alcohol is permitted. That would likely make you a better person. At least a better person that I am. But if you, like me, are an occasional scofflaw, perhaps you are looking for creative ways to bend our blue state blue laws.

Lucky for you, a current trend in the wide world of wine helps to obfuscate the fermented grape by hiding wine in aluminum cans. Craft beer has already made the transition from cans to bottles and back to cans. But wine snobs have had a hard-enough time dealing with synthetic corks and Stelvin closures (screw-caps, as the non-wine snobs call them).

Is the wine world ready for wine in a can? And should believers in the sanctimony of wine culture advocate for such an abomination?

If you don’t mind raised eyebrows at the National Seashore or at one of the 413’s lovely lakes when you bring out the corkscrew and pop open a heavy, glass, high-shouldered bottle of Bordeaux, perhaps you don’t need wine in a can. But current trends in wine sales would indicate that you would not be alone if you decide to hide a can of wine in you bathing suit pocket or bikini top.

Personally, I enjoy the judgmental stares of “non-vivants” when I bring out a bottle or two of wine in a place it seemingly or legally doesn’t belong. My public drinking friend, The Wine Squirrel, and I have a bit of a reputation in the greater Northampton area for lunchtime day-drinking, where we break out a suitcase we call “The Football” that contains two bottles of wine and two Waterford Crystal glasses. We usually have at least the tacit permission of the restaurateur. But it occasionally skirts the edges of legality.

It would be much easier to obscure what we were up to if we surreptitiously pulled out a can. But could wine in a can ever be considered “fine wine”?

As I write this, I am on The Cape of Cod where I am “glamping” in a yurt at Nickerson State Park in Brewster. Half-camping in a yurt is the wine-in-a-can of a Cape Cod vacations. It is better than camping, but it is nowhere near as nice as renting a house. It is much cheaper! 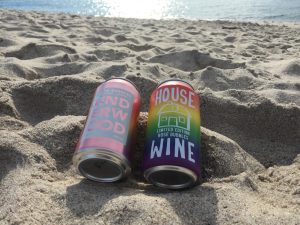 The wines-in-a-can I tried on vacation were fine for absconding into a beach bag and hiding between the pages of your summer reading. But forget about ruminating on its lychee nut notes or viscous mouthfeel. And they weren’t appreciably cheaper that an actual bottle. Both cans were six bucks a piece.

Wine in a can is not a new concept. It was a flash-in-the-can idea from Australia that fizzled out in the late ‘90s. And Coppola Wines (yes THAT Coppola) has been making a sparkling called Sofia (yes THAT Sofia) in a can for years.

But those cans are tall and slender. Decidedly not soda or beer canny. Perhaps you’ll fool people into believing that there is a healthy beverage in that skinny can. But if you’re trying to go unnoticed, the Sofia cans are suspect. They’re like Fredo Corleone. Doesn’t look right. Doesn’t seem right. It just might betray you. You broke my heart, Fredo. You broke my heart too, Sofia. Not as a director. As a director you are fantastic, but as a wine-in-a-can and as an actor in Godfather III.

A new wine company called Union Wine Co. with their Underwood wine in cans has cornered the market on canned wines and is gaining ground on the traditional wine in bottles.

On the way to First Encounter Beach, where in 1620 all the Pilgrims lost their virginity, I pulled into the Eastham Superette and bought a can of Underwood Rosé Bubbles.

Unlike the Sofia can, the Underwood is a traditional can. It looks like it could be a soda can. And, like Frank Underwood from House of Cards, the Underwood Wine’s exterior masks what lurks inside.

This rosé of Pinot Noir from Oregon is surprisingly pleasant: very fruity and a little too sweet but a refreshing day-drinking beach treat for a scofflaw such as myself. With Underwood in a can, Union Wine Co. is striving to unsnob wine and compete for the palates and pockets of craft beer drinkers.

They write on the back of the can “We love our wine, we just don’t drink it with our pinkies in the air. #pinkiesdown.” The hashtag is gag inducing. The wine is not half bad. It gets one pinky up, but I’m not quite ready to give it a thumb. It’s gotten some surprisingly good reviews given how déclassé wine-in-a-can can seem to the connoisseur.

The second can of wine I tried was House Wine Rosé Bubbly. House Wine is the former creation of former rock & roll tour manager turned rock star winemaker Charles Smith. The company he’s now sold has been making Walla Walla Washington wines in a can for better than a decade. Smith had made some dynamite wines under this House Wine label. I wonder what he thinks of the rosé bubbly.

Even with the benefit of having 375 milliliters of another can of wine gone to my head, thus impairing my judgement, this wine underwhelmed. Low acidity. Little fruit, but a lot of sweet. It tasted like Hubba-Bubba Bubble Gum.

With House Wine’s “everyone is welcome in our house” motto and the new special rainbow can design created in honor of LGBTQIA rights, and with $2 per case of the special cans sold going to the Human Rights Commission, I was simultaneously filled with Pride and skepticism. Are they truly good allies or are they’re just using cans to cash in on the capitalist takeover of the LGBTQIA movement? But my 13-and-a-half-year-old gay son liked it. The rainbow can. He’s not allowed to drink the wine. Alright, one tiny sip. I’m already breaking the law by drinking canned wine on a beach.

It was also very helpful of House Wine to put a chart on the back, reminding the drinker that two cans is equal to an entire bottle of wine. Illegally consume responsibly, while flouting the law and drinking on a public beach.