Stagestruck: At Shakespeare & Company, the Show Must, and Did, Go On 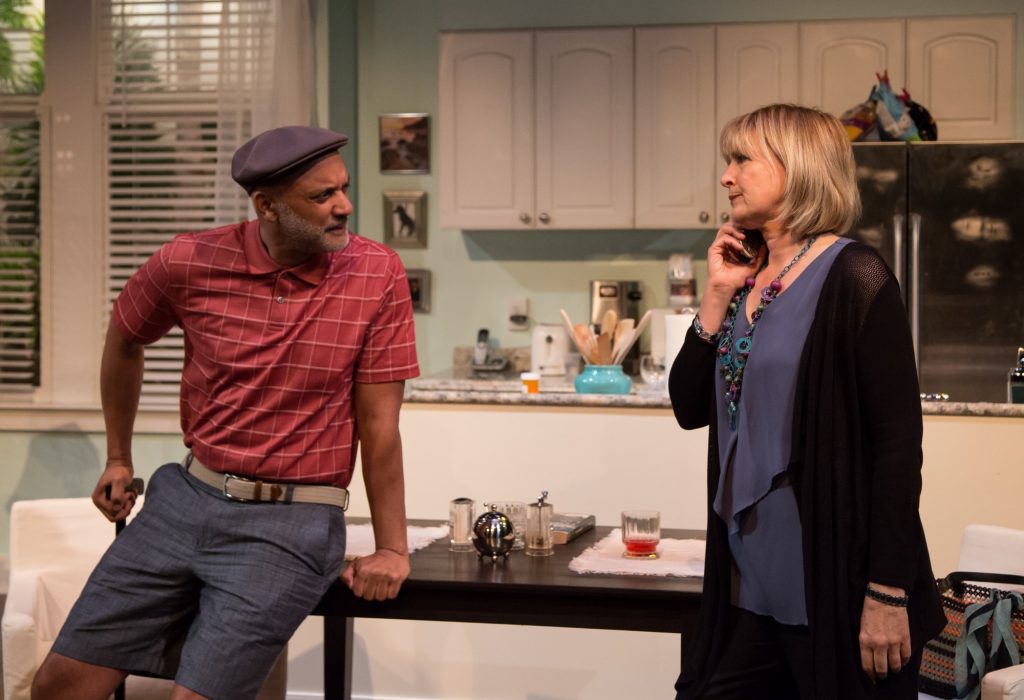 For three years in the mid-’70s, Anthony Perkins starred in the long-running Broadway production of Equus, playing the psychiatrist Dr. Dysart (pause for Psycho jokes). Just before one matinee came an announcement: “Anthony Perkins will not be appearing in this performance.” Groans of disappointment! “His role will be played by Richard Burton.” Buzz of excitement!

At the time, Burton, who had played the part in London, was preparing to do it in the film version, and wanted to limber up by doing some undercover performances onstage. It’s a nice illustration of hierarchical celebrity. And last weekend a local version of that story happened at Shakespeare & Company.

Just before the matinee of Morning After Grace, it was announced that one of the actors, Steven Barkhimer, was ill, and would be replaced at this performance by Allyn Burrows. Buzz of excitement – because Burrows isn’t some anonymous understudy, but the company’s artistic director.

I joined in the buzz, partly because I know Burrows as a fine actor from his work with the Actors’ Shakespeare Project in Boston and several seasons at S&Co, and I was eager to watch the ad hoc performance unfold.

Carey Crim’s play is a grown-up romantic comedy about aging grown-ups – a 90-minute one-act with an inserted intermission, possibly as a service to the aging audience’s bladders. Beginning the morning after (see title) a drunken one-night stand between Angus and Abigail, who met the previous day at the funeral of his wife Grace (see title), it  proceeds through a cascade of comic misunderstandings and anguished crises to a grown-up (for a rom-com) ending.

Angus is a vigorous 70, living in a Florida retirement community, Abigail a reluctant 62, one year into her own kind of widowhood, having been traded in by her husband for a newer model. There’s also Angus’s gay neighbor Ollie, who in his prime was a major-league baseball player (and yes, the “batting for the other team” gag is dutifully delivered).

Burrows wasn’t Barkhimer’s official understudy but a show-must-go-on stand-in. That is, he had the script with him onstage and very little rehearsal under his belt (the show’s director, Regge Life, had returned for the emergency). But he jumped into the role unreservedly, giving it energy and feeling, and handled the script so deftly that at times I stopped noticing it. Indeed, as the performance went along he grew more and more into the character, till sometimes it felt like a time-lapse demonstration of the rehearsal process.

The show’s rhythm was undoubtedly affected by the presence of a substitute, but Burrows’ colleagues seemed barely fazed by having a different Angus in their midst. Corinna May’s performance as Abigail, a cool and contained demeanor with an undertow of unease, was possibly even enhanced by her character’s similar situation – finding herself surprisingly in the company of an unexpected man. I found Kevin Vavasseur, as Ollie, totally charming and disarming, though he struggled at times to give a natural ring to some of Crim’s more awkward lines.

All in all, I was delighted to have been there for this makeshift performance, which I found more interesting than the play itself (in contrast, I confess, to most of the other critics and apparently the audience). Morning After Grace begins as a bedroom farce, and the early revelations and senior-citizen jokes (“At our age funerals are better than singles bars”) work pretty well. But when things turn serious, with deep personal revelations and emotional upheavals playing out in impromptu therapy sessions, the plotting is just as mechanical as the farcical opening, and the “grown-up” bittersweet ending is forced.

Burrows’ appearance also provided a nice illustration of something that makes S&Co unique in this region. It’s the closest thing we have to a true repertory company. The theater runs on a core of artists who either work here all year round or regularly return, a cadre renewed and refreshed by talented incomers. For example, May is a long-time veteran, Barkhimer is newly arrived from the Actors’ Shakespeare Project, and Vavasseur is a graduate of S&Co’s training program.