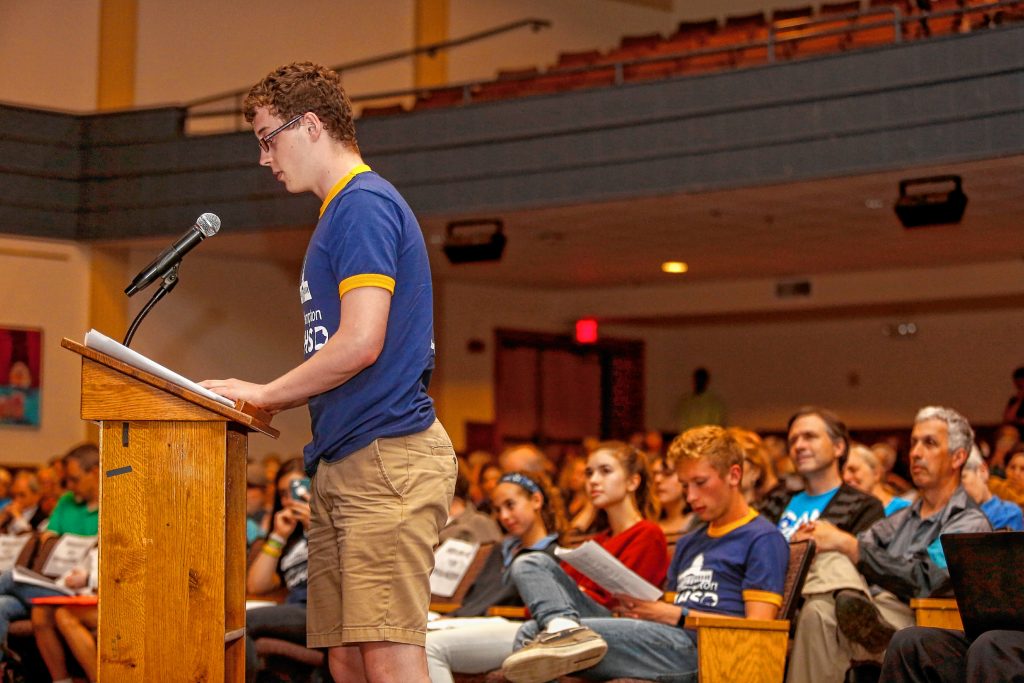 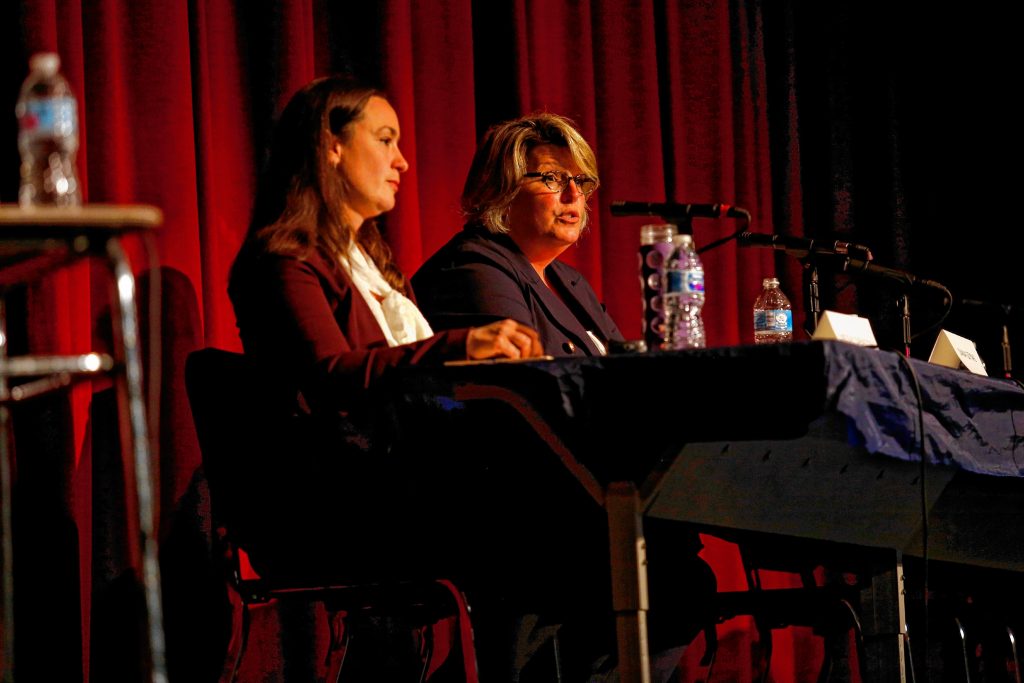 “I am consistently inspired by the youth activists in this community,” said Lindsay Sabadosa of Northampton in front of a room full of students, teachers, parents, and community members at the Northampton High School auditorium on June 13. 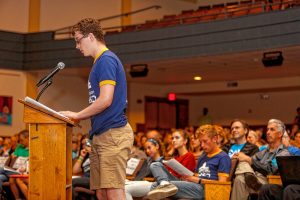 Liam McBride of Northampton High School’s gender sexuality alliance asks 1st Hampshire District in the Massachusetts House candidates Lindsay Sabadosa and Diana Szynal what changes the legislature can make to ensure all citizens are educated, safe and protected in light of the sexual harassment, assault and abuse of power highlighted by the MeToo movement June 13, 2018, during a student-organized candidates forum at the school. Sarah Crosby photo

Ethan Cooper of Northampton, a junior at NHS and a representative of the Northampton High School Democrats said, “I feel like this is just a really good opportunity for us as high school students and for us as clubs to come up with something that each club focuses on and hear their opinions and thoughts on the issue.”

Adia Bennett of Northampton, a sophomore at NHS and a representative of the Northampton High School Environmental Club said, “I think it’s a great opportunity, not only to hear from our possible representatives, but also to be able to ask them questions about the things we’re interested in.”

The first round of questions and answers and were led by Ben Moss-Horowitz of Northampton and junior at NHS. The questions were directed towards Sabadosa and Szynal.

“I want you all to know that your issues are our issues,” Szynal said in her opening remarks.

Both candidates were asked a variety of questions from each club, all composed and delivered by students of Northampton High.

Saraphina Forman of Northampton, a freshman at NHS and representative of the Feminist Collective, asked candidates how they think people can prepare young people to be objective and involved citizens. 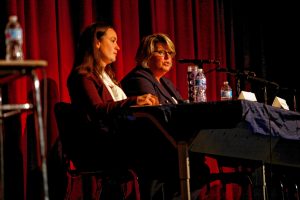 “One of the bills that I’ve been working to advocate this year is called The Healthy Youth Act,” Sabadosa said. “It’s a bill that would provide comprehensive sex ed in all schools — medically accurate sex ed, I should add — and the only way to pass that is by having youth go to Boston and telling the legislators why this is so important.”

Szynal followed up with her response.

“I think that the best thing to do is teachers routinely ask people in elected positions to come in and talk to the class, and you should know who your representatives and senators are, or who your selectman in your town and city council are, and you should feel comfortable talking to them,” she said.

Forman also said, “I think it’s really important that, in order to be involved and effect issues that you care about, a great way to do that is through political action and really taking advantage of connecting with your local representatives.”

Tadea Martin-Gonzalez of Northampton, a NHS sophomore, co-chair of the Northampton High School Democrats, and a representative of the Pioneer Valley Students for Gun Control, asked the candidates how they plan on improving transportation and infrastructure throughout the Commonwealth to bring Western Mass in closer contact with the eastern part of the state.

“Obviously there’s a lot of obstacles here; there’s a lot of expenses,” Szynal said. “But if you think about what we can achieve when we connect both ends of the state; the benefit to us economically, educationally, culturally — although I think that benefits them more because we have more to offer out here in that regard — but there’s no question that we need to embark on this investment. It’s long overdue.”

“One of the things that I’ve been saying and that I’ve been talking to current representatives and senators about is how can we come together as a Western Mass coalition to fight for expanded rail service. We’re going to really need to push the governor on this; we’re going to need to make sure that the funding comes through and also we’re really going to need to make sure that we get to Logan Airport.” Sabadosa said.

To wrap up the first part of the night, Moss-Horowitz asked both candidates what they felt is one issue that really needs to be addressed but is not currently taking precedence.

“If I had to say something that I don’t really think gets any attention at the Statehouse, it would have to be reproductive healthcare,” Sabadosa said. “We have three times the amount of fake clinics in Massachusetts than we have real clinics. There are patients across the state who are dealing with really serious issues of transportation, of access, of funding, that’s something no one talks about — it just doesn’t get brought up.”

After a short intermission, Cherilyn Strader of Northampton, a junior at NHS and co-chair of the Northampton High School Democrats, led the discussion. The six candidates running for State Senator took their places on stage.

Each candidate was given three minutes to give an opening statement, and then the questions from student groups began again.

One key question of particular concern to those in attendance came from Ethan Cooper, a representative of NHS Democrats. He asked the candidates, “How will you allocate and distribute money to the schools in both K through 12 and higher education?”

Morin began the 90 second response, “I’m very concerned about the expansion of charter schools infringing on our local K-12 institutions, and of course public higher education needs to be better funded. I would just stress that we need to pass the Fair Share Amendment, which would be the first thing. And then we could allocate additional funds towards both K-12 and public higher ed.”

The Fair Share Amendment would impose a 4 percent state tax on income above $1 million to be used for education and transportation infrastructure and is currently under consideration by the state Legislature.

Conner followed up, “Definitely without question, and I think everybody on this panel would agree that the Fair Share Amendment that we’re asking for has to happen. The idea that we’re still funding schools through our property taxes is archaic and it has to end.”

Kline was next in responding to the question. “I also support the Fair Share Amendment and fully funding our public schools, updating the Chapter 70 formula. I also support ending high stakes testing. Public schools really are the foundation of a more equitable, more engaged, and a more compassionate society, and that’s why we really need to end high stakes testing and focus on the whole child. I support a debt-free future for higher education and I support free public higher education. And of course we need more money to do all of this, and I will fight for that.”

Murphy responded, “Education is the great equalizer in our society. If every student has the opportunity to get a good education and they have the opportunity to achieve their full potential and to succeed in the society; education is my number one priority. I’ve worked on 12 budgets in the State House and we have a structural deficit in our state budget. We don’t fund education like we should and we need more resources in order to do so. Effectively we have de facto segregation in our schools because we have de facto segregation in many of our communities and that needs to change.”

Comerford was last to respond to the question. She said, “We need to go start back at pre-K and go all the way through the university. I want to start in pre-K, and of course I want to fix the foundation budget and the funding formula. I also want to invest greater amounts in art and sciences, bringing them back into the public schools. And with regard to university funding and community college, I absolutely support a path to free higher public education, but I want to make sure that it’s available to everyone in our community.”