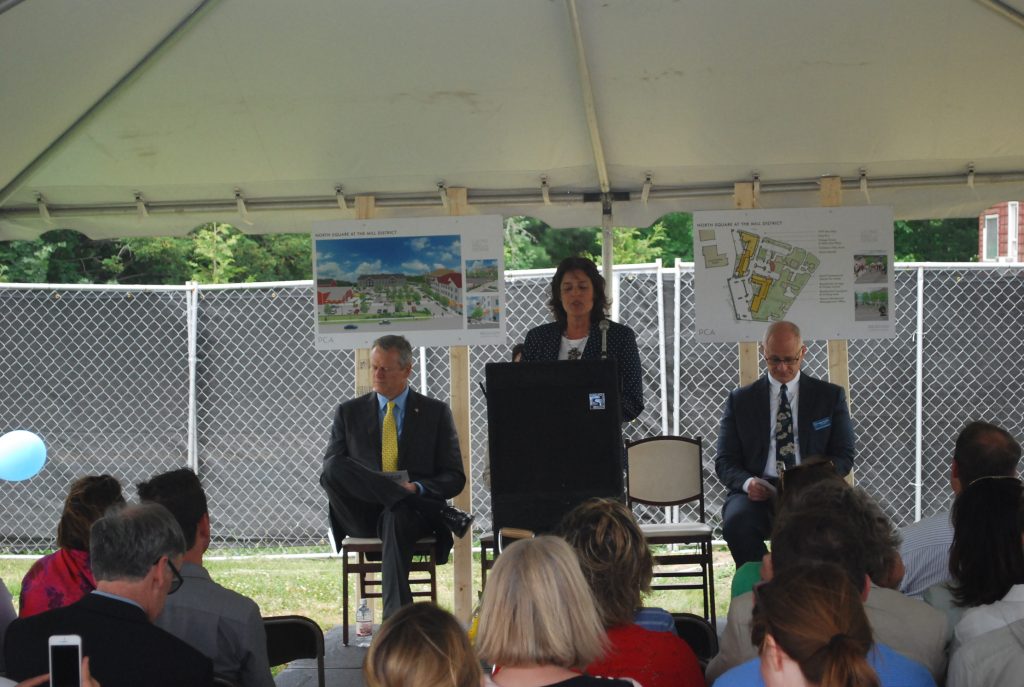 By the summer of 2019, Amherst will have a new mixed-use development of 130 low to moderate income apartments and eight to 10 new spaces for businesses at North Square in the community’s Mill District.

A groundbreaking ceremony for the development took place with local and state officials on June 14, including a rare visit from Gov. Charlie Baker, who said funding for the project was partially made possible by MassHousing Partnership as well as the Department of Housing and Community Development.

“One of the first things that we did in this administration was increase the state spending in its housing agenda by about 20 percent a year,” Baker said. “We were very aggressive about trying to get a new housing bill. Two weeks ago we managed to sign enthusiastically the largest housing bill authorization in the state’s history, which is a $1.8 billion bill.”

Baker praised the project as an opportunity to provide more affordable housing and business opportunities for the town of Amherst. He said during the past three years, more than 150 vacant properties have been transformed, completely reimagining those sites as housing or business developments.

The project is located on the former site of a sawmill on land owned by the W.D. Cowls, a family owned forestry service businesses and real estate company for nine generations starting in 1741. The sawmill shutdown operations in 2009.

Cinda Jones, president of W.D. Cowls, said her company realized that Amherst needed “growth in community” during the Internet age in terms of housing, which partially spurred the idea of the development alongside Boston-based real estate developer Beacon Communities Development.

“Our community needs a place together to buy things not more effectively found online; to share amazing food, and to enjoy services such as nail and hair salons, yoga studios and health clubs. We are trying to build a place where neighbors meet and connect face to face and enjoy time together,” she said. “Our vision is to build community.”

Dara Kovel, president of Beacon Communities Development, said about 100 people would be hired for construction jobs and 20 to 25 permanent jobs would be created for the development.

“This project has so many things that we strive for in creating quality housing across the state of Massachusetts and the region – it is mixed income and will serve people at very low income and market rate housing as well,” Kovel said.

According to a press release from Beacon Communities Development, of the 130 new apartments, 26 would be set aside for households earning up to 50 percent of the area median income. The community will be pet friendly, include fully accessible apartments, and have direct access to the Pioneer Valley Transit Authority. North Square is located less than a mile from the University of Massachusetts Amherst.