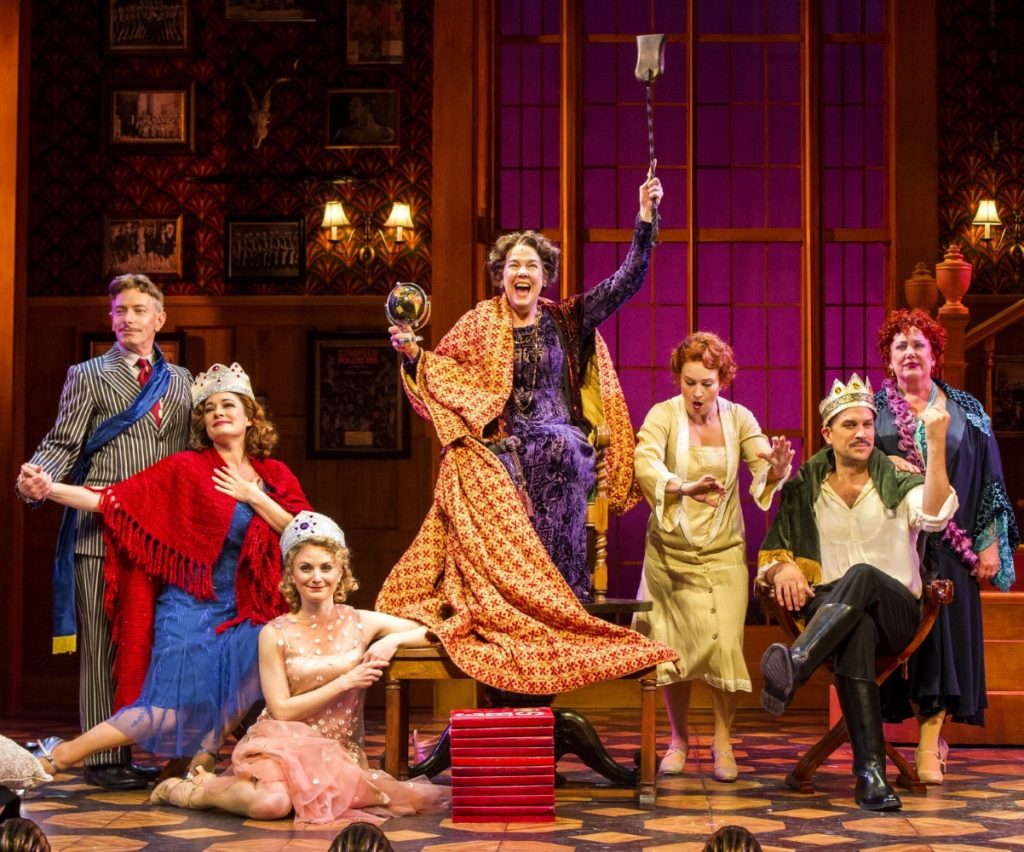 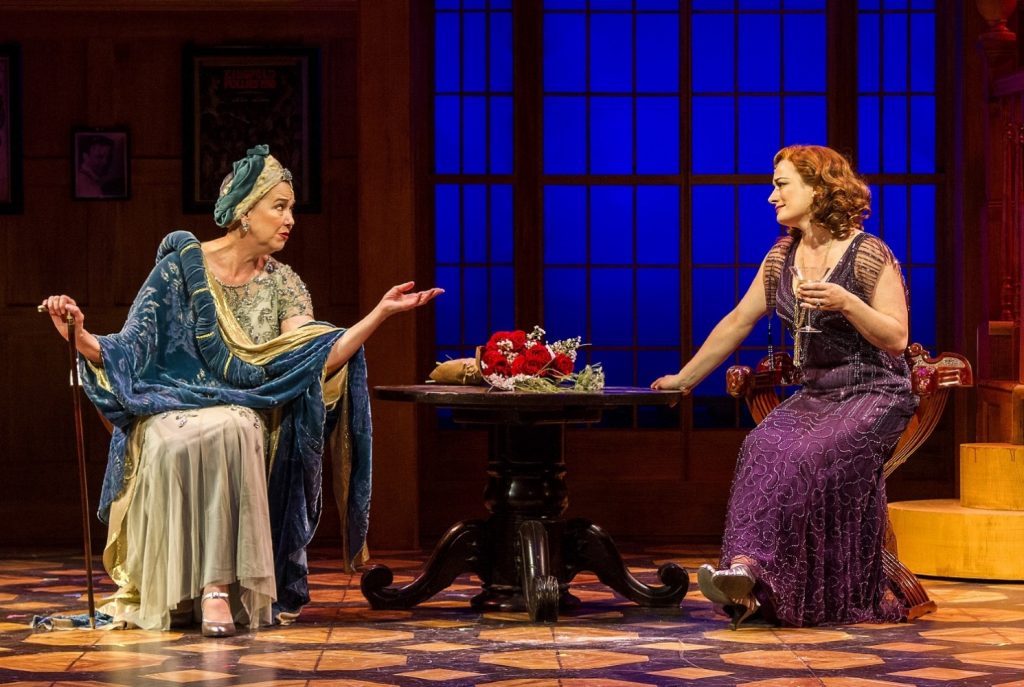 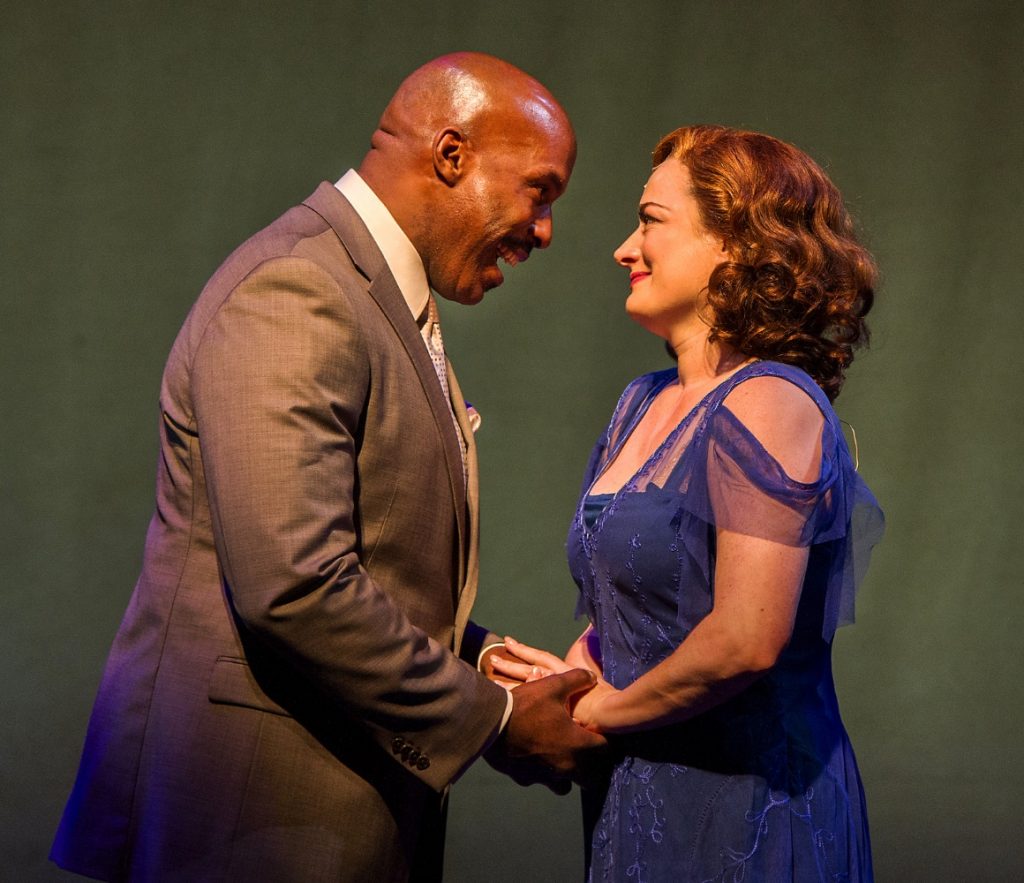 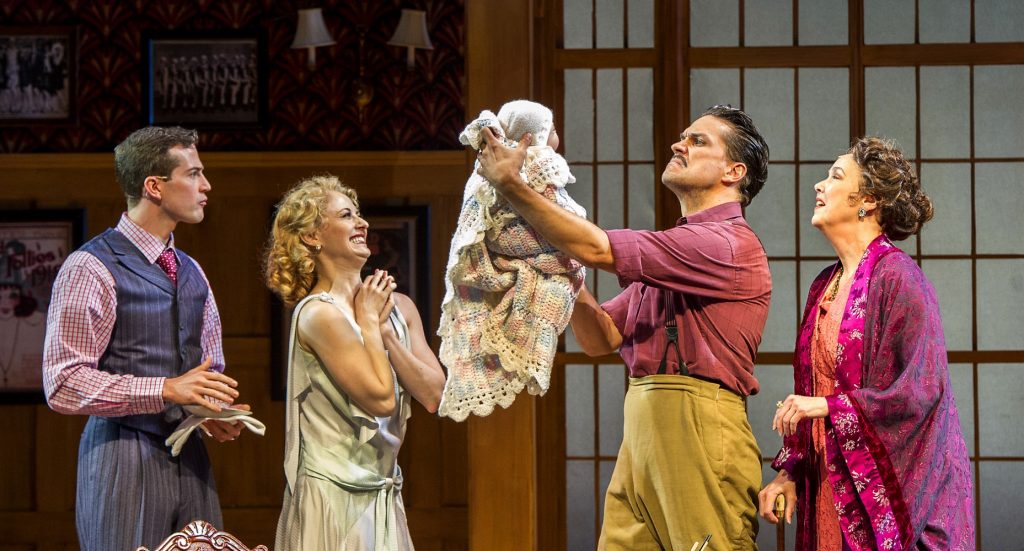 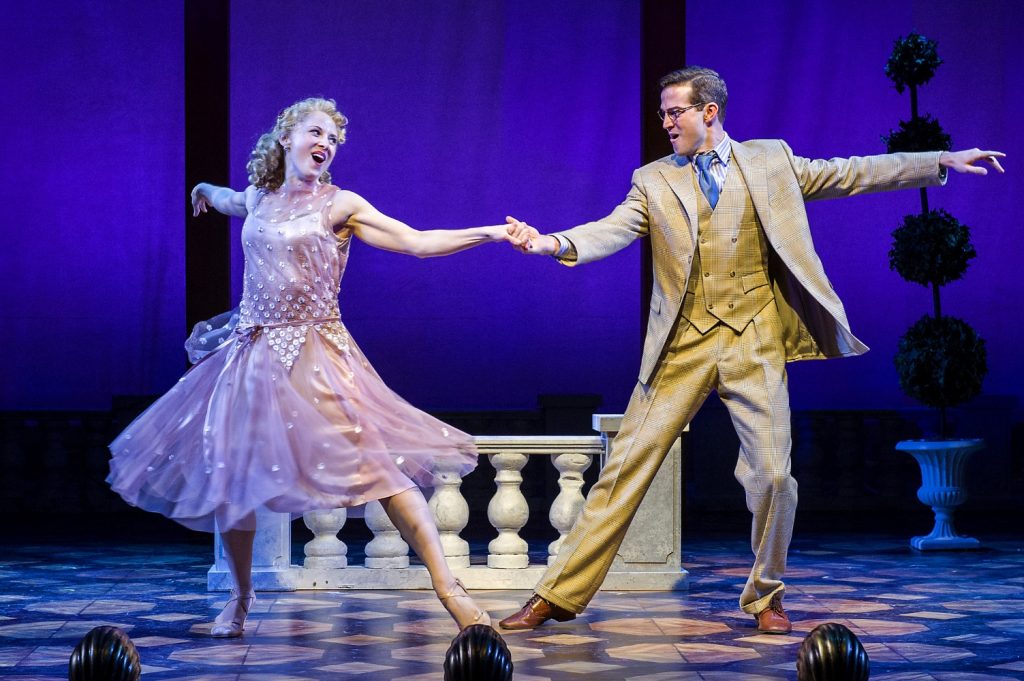 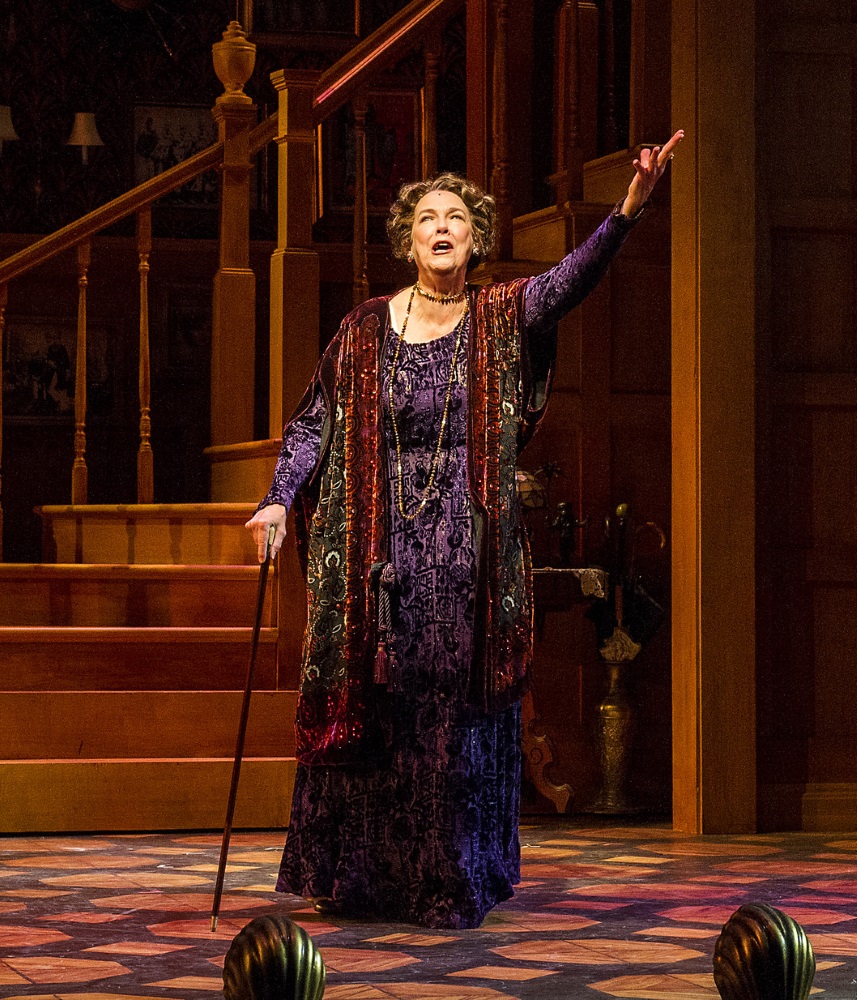 The “royal family” of Broadway in the early 20th century was the Barrymores – Ethel, “first lady of the American theater,” John the swashbuckling Shakespearean, and Lionel, best remembered now as mean old Mr. Potter in It’s a Wonderful Life. The hit Broadway comedy of 1927 was The Royal Family, an affectionate sendup of the Barrymores and the showbiz aristocracy they embodied. 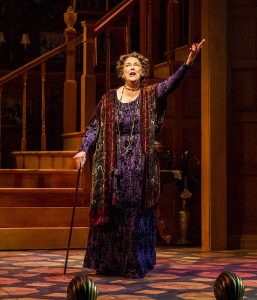 Now it’s a musical, The Royal Family of Broadway, which had its world premiere this week at Barrington Stage Company. It’s by William Finn and Rachel Scheinkin, whose Tony-winning 25th Annual Putnam County Spelling Bee was also developed and premiered at BSC. Scheinkin’s script is drawn pretty closely from the play, with the addition of a smart opening, a more efficient conclusion, and a comic excursion just after the intermission, which are perhaps vestiges of an earlier libretto by Richard Greenberg.

It’s said that for the original production, Ethel Barrymore herself was offered the role of the imperious matriarch Fanny Cavendish, and peremptorily rejected it as an insult. But Barrington Stage, and we its audience, are singularly fortunate that Harriet Harris accepted that part in this production. She is the shining star and beating heart of the show, which clearly has its own sights on Broadway but needs some adjustments if it hopes to follow its predecessor onto the Great White Way.

In the original, the three generations of Cavendishes are dramatic actors who scorn the musical stage. But here, appropriately, one of them is a song-and-dance star. That’s Julie, Fanny’s daughter, currently headlining a Broadway hit and about to hand the part over to her daughter, Gwen, in order to begin rehearsals for another tailor-made vehicle.

At the outset, Fanny greets us in front of the curtain, frail but spunky, hobbling on a cane but promising to soon be “back on the road.” Then the curtain rises on the backstage bustle at Julie’s theater, a routine Fanny knows so well that, sitting at home, she can track it in her mind’s eye, as the show begins and Julie belts out the opening number accompanied by a tap-dancing chorus line. It’s a great way to pull us into that world – the original play takes place entirely in the lavish Cavendish penthouse – and it’s just as much fun watching Harris as she lives the moment in her mind. 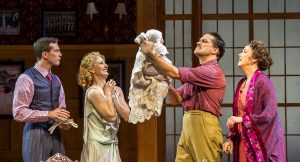 The clan also includes Fanny’s brother Bert, whose ego far exceeds his talent and whose wife Kitty has just as much of the former and even less of the latter. And then there’s Julie’s brother Tony, a silent-movie star who’s anything but silent offscreen and whose latest performance was the attempted murder of his Hollywood director.

Part of the plot involves Tony’s need to evade arrest and get his famous face out of the country. Another strand concerns Bert’s effort to relaunch his stalled career with a dreadful play about Vikings – of which we get a cringingly amusing excerpt in Act Two. But most of the through-line revolves around Julie’s and Gwen’s ambivalent desire to quit the family business for normal married life with non-theatrical husbands, which to Fanny would betray a genetic imperative to continue the Cavendish dynasty. Gwen is engaged to sweet, bespectacled stockbroker Perry, and an old flame has just reentered Julie’s life – Gilbert, a millionaire entrepreneur who seems to own half of Brazil.

The 1927 Royal Family was written by master farceur George S. Kaufman and novelist Edna Ferber (the musical inserts a neat reference to her groundbreaking Showboat), and many of the script’s best zingers come straight from the play – like Fanny’s response to the notion that getting married means leaving the stage: “Marriage isn’t a career,” she dismissively declares. “It’s an incident.” 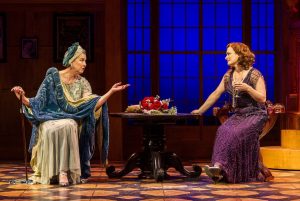 Some of Finn’s 18 songs for the show recall its setting, the era of “Berlin and Kern, Gershwin and Gershwin, and Rodgers and Hart – songs that amuse you the moment they start,” as the title song has it, and these are the ones that work best, tunefully and dramatically. Others are more typically contemporary, or sound that way, since the arrangements sometimes obscure what could be a Twenties feel. A more richly, unabashedly melodic score – a must especially for a show-biz musical – and a more coherent musical approach would give the show the signature style it doesn’t yet have.

The stage is brimming with talent, not least of which is found in the exuberant, multitasking ensemble of 12, who not only sing and dance (Joshua Bergasse is the capable choreographer) but double and triple as extras, from pestering reporters to Hindu mystics; deliver the stream of telegrams, flowers, and luggage that neatly illustrates the tribe’s hectic but pampered lifestyle; and serve as stagehands for the agile scene changes. Holly Ann Butler occasionally steps out of the ensemble as Della, the obligatory maid of this period and class, using a Betty Boop mouth and non-nonsense air to earn her self-styled title “domestic stage manager.”

The set, designed by Alexander Dodge and lit by Jeff Croiter, is on wheels and wires, allowing the wood-paneled walls of the Cavendish drawing room to fly out of sight as a topiaried terrace rolls into place. The Twenties look is emphasized with clamshell footlights and completed by Alejo Vietti’s spot-on period costumes and Mary Schilling-Martin’s stylish (and in one case hilarious) wigs. 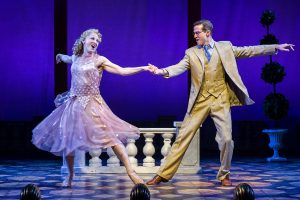 John Rando’s staging swings between thrilling and frustrating. He handles his large cast with a fluid energy that seldom flags, and sprinkles the action with some cunning sight gags. But too often the actors seem to be left to their own impulses, allowed to drop jokes or overplay them. And he (or is it musical director Vadim Feichtner?) also permits some of the songs to be oversung, stifling the ballads’ heart and the novelties’ humor.

Among the principals, Hayley Podschun and A.J. Shively are enchanting as Gwen and Perry, she with the kind of winning sparkle that makes you believe she really could become a star of the next generation, he amiable and gangly, both of them nimble dancers. Arnie Butler and Kathryn Fitzgerald make a comically deserve-each-other pair as talent-impaired Bert and Kitty, proving it in their slapstick Viking number. And Chip Zien is wonderfully harried and weary as the clan’s long-suffering manager/producer. 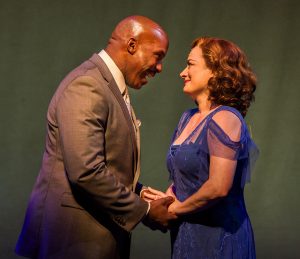 Alan. H. Green is Gilbert, Julie’s tycoon love interest. He’s manly and charming, both younger and hunkier than originally conceived. (He’s also black, a case of “color-blind” casting, which, if you’re a regular with this column, you’ll know I strongly advocate, as in, why not and it’s about time.) Casting Green as the prosperous Amazonian exploiter (he played another tropical adventurer in the company’s 2016 Broadway Bounty Hunter) gives the role a brawny energy it didn’t originally have, and more credence to Julie’s attraction to him.

It’s the top of the bill where I find problems. Will Swenson starred in Barrington’s Pirates of Penzance two seasons ago, as the vain, swaggering, scowling, mugging Pirate King. He gives exactly the same performance as Tony. Both characters are bigger-than-life personalities, to be sure, but that loud, over-the-top bravura doesn’t work so well in this setting. Swenson’s Tony has no subtlety, little variety, and not a glimmer of that ineffable but essential charisma that makes a star.

The same goes, surprisingly, for Laura Michelle Kelly as Julie, the family’s reigning jewel. Kelly is a bona fide musical-theater luminary (she originated the leads in Mary Poppins and Finding Neverland, for example) but I found her simply brassy and brash in her musical numbers and otherwise oddly subdued. Here again, I just didn’t see the star quality that needs to shine on and offstage.

Which is precisely what Harriet Harris absolutely radiates. Fanny is near the end of her road, but the stellar spark and effortless pizazz are still there. She’s spirited and savvy, haughty and high-handed, snappishly funny and ultimately poignant – the absolute monarch of the Royal Family and indispensable anchor of the production. Her solo number, “Stupid Things I Won’t Do,” has a built-in encore which is totally earned.

By all means catch The Royal Family of Broadway during its premiere run (through July 7). If it goes on to New York, you can say you saw it here first. If not, you’ll still be glad you saw Harriet Harris.