Stagestruck: A Crisis of Faith, with Laughs 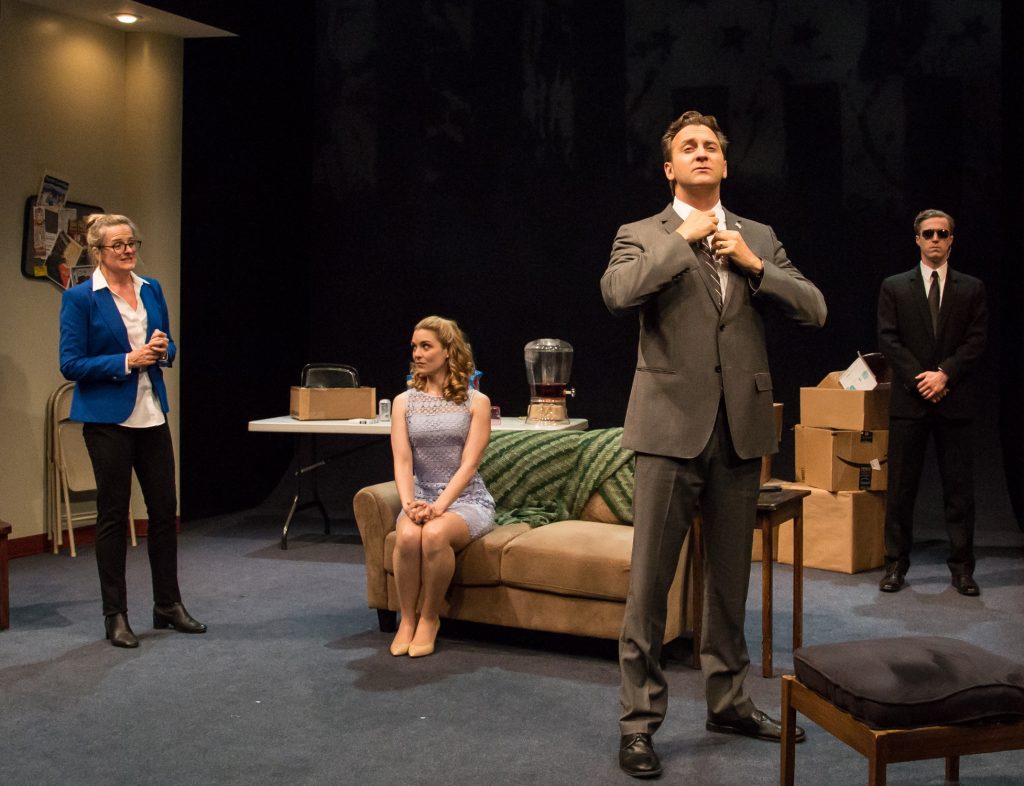 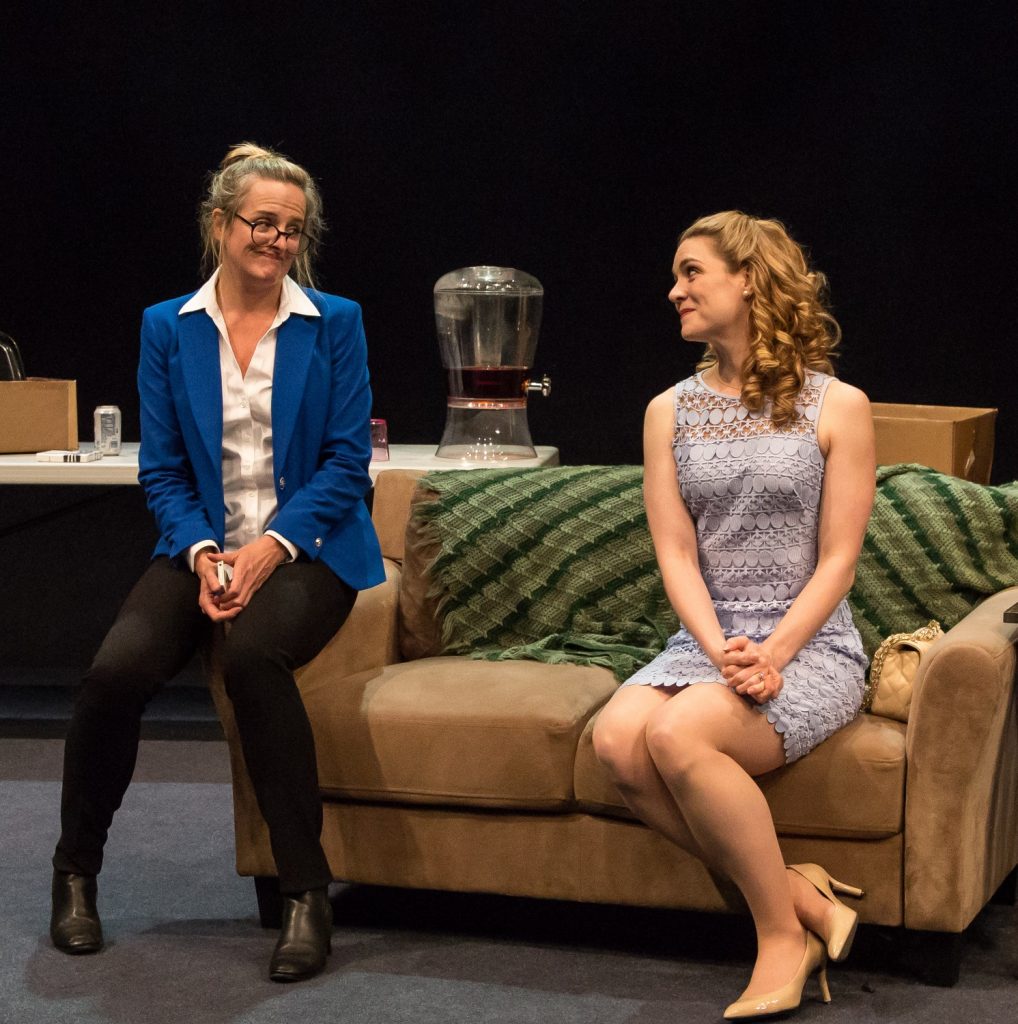 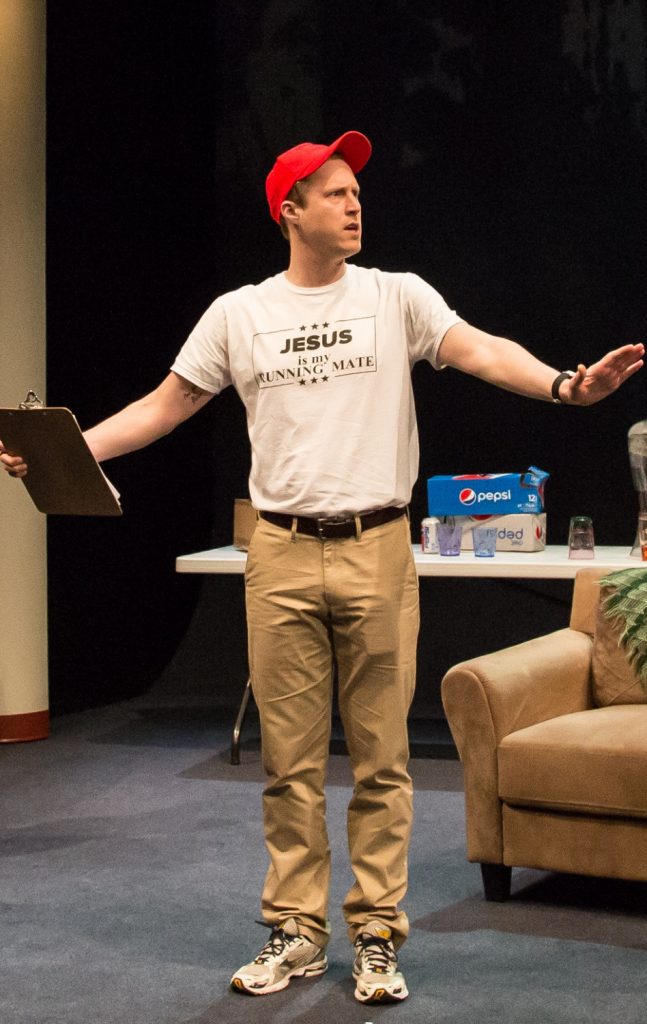 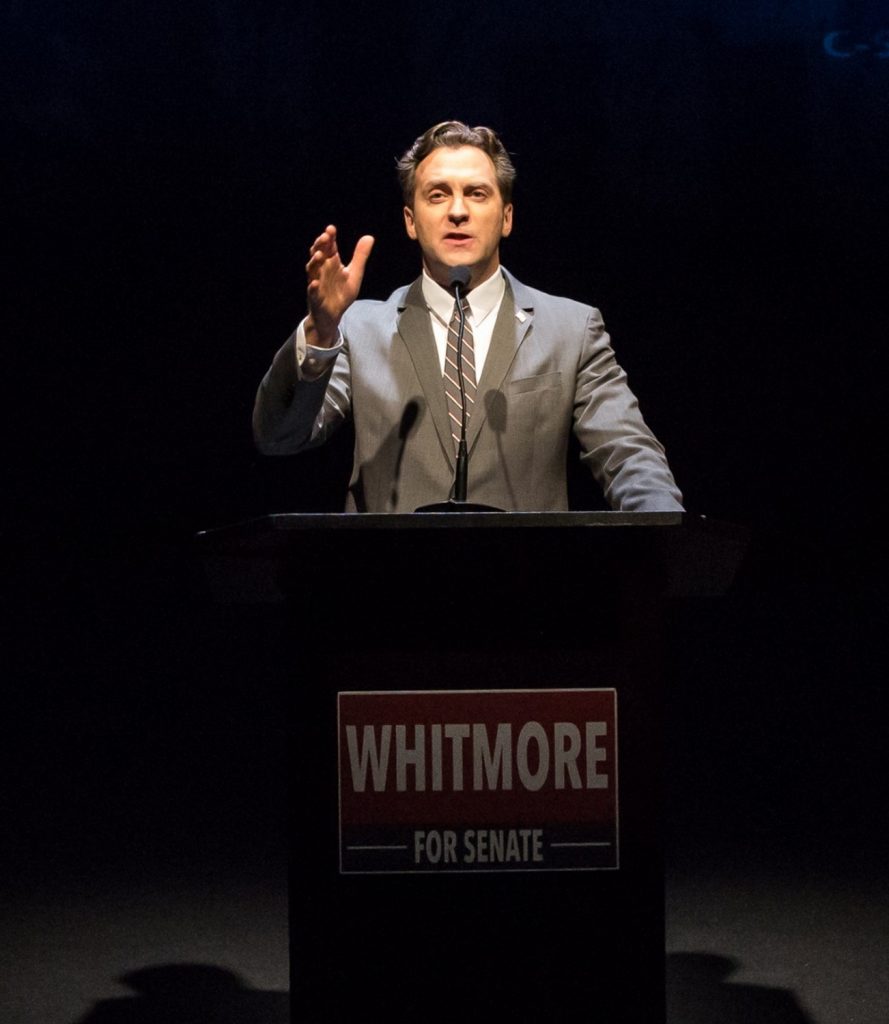 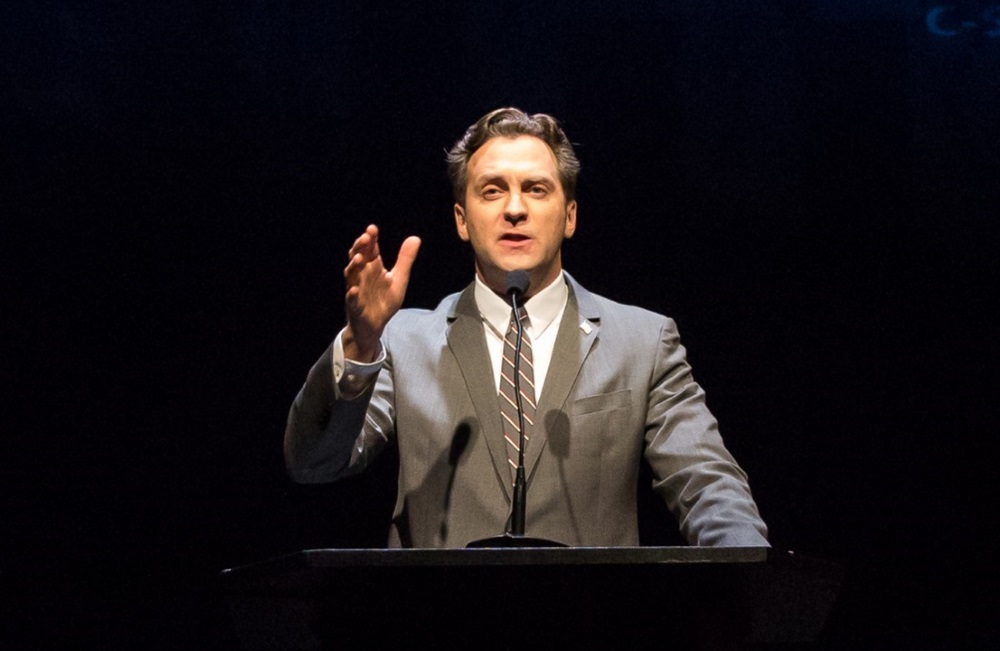 Church & State is the funniest play about a serious issue I have ever seen.

The issue is gun violence, specifically mass shootings, and the humor is threaded into the storyline so organically that, far from cheapening the theme, it lends to it a richer, more deeply human heart.

The central figure in the Berkshire Theatre Group’s thrilling production is North Carolina’s (fictitious) junior senator, Republican Charles Whitmore, who shares with his core constituency the Three F’s of their creed, Faith, Family, and Football – and to that you can add Firearms. He’s running for re-election, and should be a shoo-in, but a scandal is brewing.

No, not an affair, he assures his excitable wife, but something potentially worse. A conservative Christian blogger has caught him on tape apparently doubting the existence of God. This blasphemy was triggered, if you’ll excuse the expression, by a fresh massacre, this time at an elementary school in his home town, performed by a 19-year-old boy with an AR-15. It has shaken his faith, if not in the deity then certainly in the value of pious pronouncements as a response to the shooting. “How is our prayer going to prevent another?” he tells the blogger in a moment of unguarded anger – and it’s going viral. 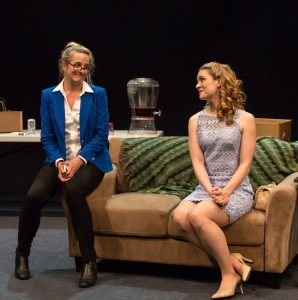 The senator’s campaign manager is a secular Jewish New Yorker who has taken the job in hopes of riding his national aspirations to the White House (“working in the West Wing beside Rob Lowe and Alison Janney,” she quips). She’s strategic and shrewd, but right now, in the greenroom of a Raleigh auditorium just before a campaign appearance, she’s desperately trying to keep the candidate from addressing his supporters with words “from the heart” that aren’t in the stump speech.

His wife, too, is anxious about the speech, but even more panicked at his apparent lapse in faith. And both women are terrified that he’s about to veer from Second Amendment orthodoxy and touch “the third rail of politics,” gun control. (David L. Arsenault’s set is backed by the image of a threadbare stars and stripes.)

In a program note that describes his route to Church & State, via this decade’s string of mass shootings and political inertia, playwright Jason Odell Williams explains that “a heavy drama about heavy topics doesn’t interest me. What interests me is a play that gets to the heart of the people around these issues. And when you write about people, you can’t help but let them be funny and sad and honest, heartbreaking and uplifting all at the same time. … To me, comedy and tragedy are not two ends of a single line, but two points right next to each other on the same circle.” 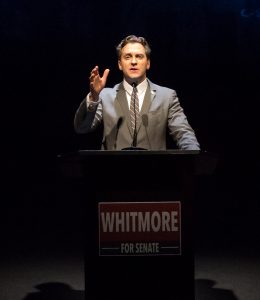 His play has plenty of both. More than that, Williams doesn’t simply sprinkle some jokes into the early scenes to soften us up before the anvil falls, as so many “heavy” dramas do. Almost to the end, the characters’ wisecracks and idiosyncrasies provide a sparkling current for the quick-flowing action, which includes two switchback surprises, one more credible than the other. The playwright’s hand is so deft and sure that the humor never obscures the topic nor softens the blow.

The cast is perfection. Flawlessly directed by Charlotte Cohn, Williams’ wife and frequent collaborator, the four performers seamlessly strike the balance Williams is after. In Graham Rowat’s assured performance as the senator, we see with equal clarity the genial retail politician and football fanatic, and the anguished citizen driven to a Road to Damascus moment by one bloodbath too many.

Another BTG veteran, Keira Naughton, shines as his campaign manager, Alex Klein. Her big-city cool shredded by the candidate’s off-script impulses, she cringes with apprehension as she waits for the next shoe to drop. Judy Jerome has a plurality of the laughs as the senator’s wife, given to rattling off malapropisms like “sticker-tape parade” in a high-speed Appalachian twang, but smarter than she sounds. As she confides to Alex, her husband “wears the pants in the family, but I’m the one who says which pants.” 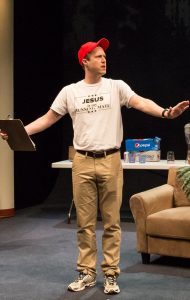 Andy Talen earns a special bravo for his four neatly delineated cameo roles, most amusingly as a gofer attached to the campaign, eager as a puppy and just as clumsy, sporting a “Jesus Is My Running Mate” t-shirt.

Church & State premiered in 2016 and is currently scheduled for over 20 regional productions. Williams and Cohn’s goal is to present it in all 50 states, “as a conversation starter,” as Williams put it in an opening-night talkback. Here in Stockbridge, brief audience discussions will be part of every performance in the run (through June 30) following the 75-minute show, led by a variety of professionals in relevant fields. A lobby table displays letters of support from Senators Warren and Markey of Massachusetts and Murphy of Connecticut.

The playwright said he expects the show’s regional audiences will be mostly liberal – “That’s who goes to the theater,” he shrugged – but hopes his play will “help eliminate the divide” that’s rending the country, and maybe even “change a mind or two.”