Letters to the editor: Tiny houses? How about tiny families.

Tiny houses? How about tiny families.

In response to “Downsize Me: Tiny houses celebrated in Vermont while regulatory barriers remain in Massachusetts” (June 7 – 20, 2018): 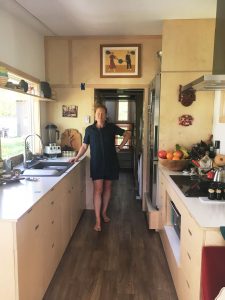 I’ve lived in the Valley for over 30 years and have watched the woods, farms, and little back roads fill with houses. Many of these new homes are ridiculously huge considering we’re beyond peak oil. A friend said they built a huge home because of resale concerns. Many towns have zoning laws with minimum square feet for homes.

Since I was born in 1951 the population has gone from 2.5 to 8 billion. I wish there was a worldwide push for tiny families and hope the person in your article who wants to grow her family means only one more kid. Humans are like locusts. We’re taking up every inch of the land, filling it with oversized homes, stores and businesses, and squeezing out every other species. We’re squandering resources and trashing our atmosphere and oceans. Many species of animals and trees are dying. What right have we to breed like flies and wreck this paradise of a planet for everything else?

They’ve done studies putting increasing numbers of rats into cages and found that they kill each other when too crowded. Our suicide rate is increasing; we’re constantly at war; and mass killings are a daily event.

Discussing zero population growth, which was a hot topic in the ‘60s, is now taboo. Instead we talk about defunding Planned Parenthood and condemn China for their efforts. People need to start thinking, “Tiny families,” two kids only or we’ll be facing our own extinction having trashed our home beyond the point of no return.

I try not to be too cynical, but when I saw the article “Connecting with coal country” (May 24 – June 6, 2018) I thought, Oh dear, is this another liberal paving stone of good-intention on the road to Hell? I got as far as the fourth paragraph and the quote “After the November 2016 election, many Leverett residents wanted to understand how a rural area in another region could have possibly voted overwhelmingly for Donald Trump.” 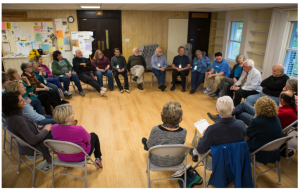 People from Leverett and Letcher County, Kentucky, speak in one of three dialogues in October, 2017. Chana Rose Rabinowitz photo

I stopped reading and made a bet with myself: with a few minutes googling I could find the answer while still in my bathrobe before the first cup of coffee was drunk.

It was surprisingly easy. And most enlightening.

If you google Letcher County KY — where the intrepid Leverett liberals had traveled to — you see that even the premise is incorrect: Letcher County KY did not just vote “overwhelmingly” for Trump in 2016. The country voted Democratic until 2004 when it went 53 percent GOP for George Bush meaning — after 9/11 and during the Iraq war. In 2008 it went 65 percent GOP. And in 2012 a whopping 77 percent Republican. In 2016 the vote for Trump only went up only TWO points from 2012 to 79 percent.

So the story is not why they voted so overwhelmingly for Trump, but why it went so overwhelmingly for Romney in 2012? (Or, against Obama two years after the arrival of the Tea Party.) Or, a better question is: How could one county flip from 53 percent Democrat in 2000 to 79 percent Republican in 2016? A 32 percent increase in GOP votes in four election cycles?

And do you have to go all the way there to find out? After the 2016 election there were many dissections of the why. We know Trump got elected by white folk, but the best predictor of which white folk voted for him was education, not income, religion nor region. That, too, was easy to find out from my couch.

Letcher County KY has about a 68 percent high school graduation rate, lower than Kentucky over all. Franklin County has about 93 percent.

About the only demographic Leveret shares with Letcher is its whiteness, north of 90 percent.

So clearly this was not about two rural counties getting together. But about an upper-class community visiting a working-class community that happened to be more rural than urban

Kim Jong Un murdered his uncle when he took office and his brother last year. He has killed 10s of 1000s of his own people and has starved his country into submission. Russia and China are on his borders and the nuclear technology and materials are most likely supplied by Russia via a facility in Ukraine. There is one crossing on the North Korea-Russia border: the railroad bridge over the Tumen River which is how the transfer would have occurred. (See: How North Korea Built an Arsenal on the Ashes of the Soviet Union. TIME, Feb./1/18)

China and Russia also want the South-Korean war games ended and the 35,000 American troops withdrawn from the region. Both countries stand to gain from Kim’s ascendency.

Trump is deconstructing our democracy and testing the waters for strong-armed tactics by imprisoning people for merely coming to our borders to seek asylum, meanwhile separating them from their children and putting them in cages in detention concentration camps. He is a Nazi-wanna-be and is most comfortable among brutal dictators whom he views as “strong.” He emulates Hitler at every turn and is seeking to make our democratic allies into our enemies.

Welcome to the New World Order. Though Trump’s supporters may disagree, this is a nightmare!