Stagestruck: A lawyer walks into a rabbi’s office… 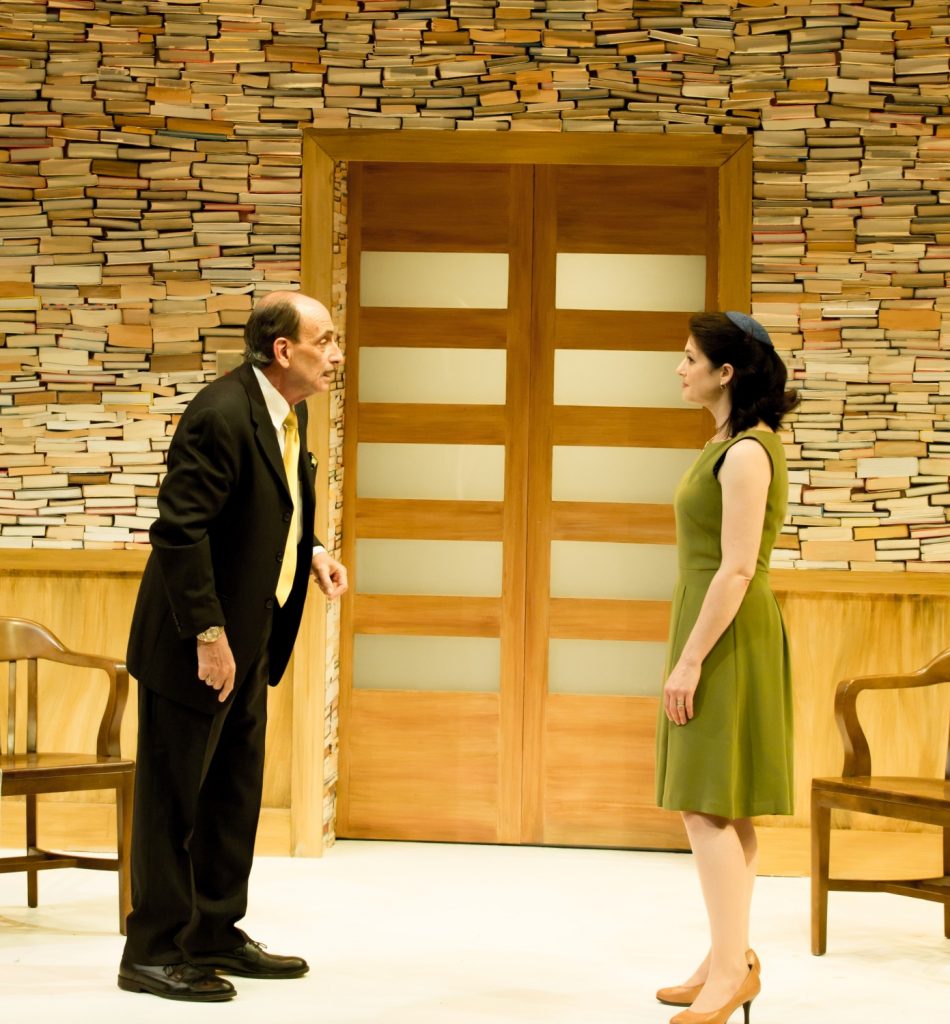 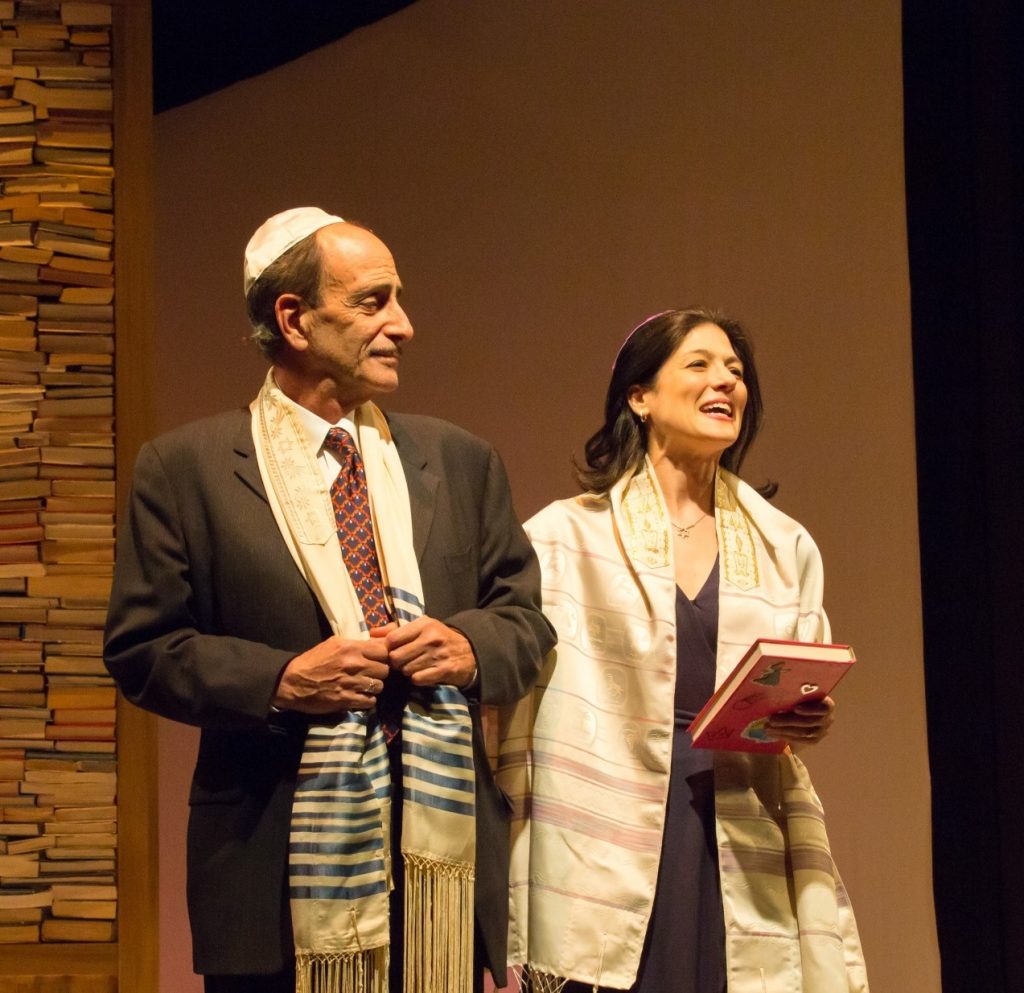 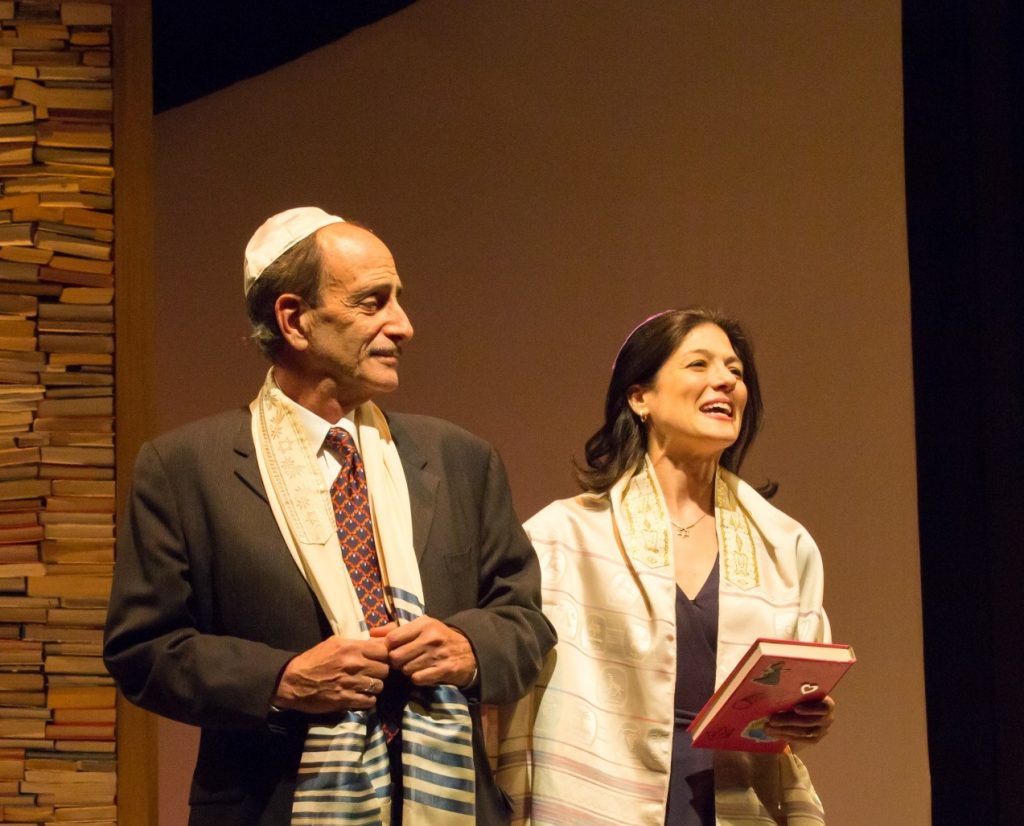 Bar Mitzvah Boy is a comedy that looks seriously at faith, community, and loss. Its premise contains the seeds of sitcom: A middle-aged Jewish lawyer who hasn’t set foot in a synagogue since he was a boy is suddenly in a rush to have his way-overdue becoming-a-man ceremony. He convinces (or rather bullies) the rabbi, who has her – yes, her – own more pressing needs, to be his personal tutor.

The jokes do indeed flow freely, especially early on. The lawyer, Joey Brant, is surprised at the rabbi’s gender. (“But you’re …” – “Uncircumcised?” she quips.) And he’s not just irreligious, he’s irreverent. (“If God had known about Hawaiian pizza, there would have been a loophole in this whole kosher thing.”)

But the play has more on its mind than Jewish humor (though the program contains a glossary of essential  terms). Things actually get dark pretty quickly. Rabbi Michael – not necessarily a man’s name, she insists – has a young daughter with terminal cancer, and the grief and stress are testing both her marriage and her faith.

Her pupil’s desire to be “called to the Torah” at this late date is that his grandson’s bar mitzvah is coming up, and Joey has secret reasons for getting his done first. His first chance at it was cancelled five decades ago, and since then he’s cut himself off, not only from the rituals of his religion, but from the embrace of his faith community and the roots of his culture.

The weekly lessons bump up against Joey’s agnostic skepticism. He’s a divorce lawyer whose experience hasn’t exactly inspired confidence in human nature. When his own professional skills eventually come into play (rather implausibly), he’s flippantly dismissive of things like marriage counseling. “If they didn’t hate each other when they decided to split, counseling will usually do it.”

He questions biblical narratives like the story of Abraham and Isaac. What loving god would order a man to murder his own son? Michael patiently explains that these are metaphors, urging him to “look beyond the story.” She herself, though, is struggling with the question of death and suffering under the eye of a merciful god, while her daughter, fighting to live until her own bat mitzvah, believes literally and unconditionally in his love. 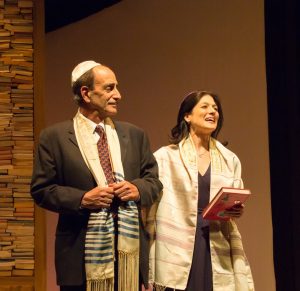 David Towlun’s set is dominated by floor-to-ceiling cases stuffed with books – literally. The volumes are crammed in edgeways, creating a sense of the stones in Jerusalem’s Wailing Wall. In one scene the unit set doubles as Joey’s book-lined law office, making a connection between the play’s two contrary personalities. In Lara Dubin’s lighting design, a ner tamid, the “eternal flame” that burns continually above the Ark, overhangs the stage.

The script’s theological lessons, and the characters’ expression of them, are pretty simplistic. I didn’t find it credible, for instance, that Joey would be so naïve as to assume that a practicing Jew would necessarily believe the Bible is literal history. These two are sophisticated adults, but their discussions are often conducted on the level of, well, a bar mitzvah class for 12-year-olds.

As things develop, there are revelations but few ah-ha moments or real surprises, and too many of the teachings come off as platitudes. Both of their respective journeys, ultimately shared, are about mending and healing. The concept of tikkun olam is evoked – a Jew’s responsibility to work to “repair” the world.

The two performers make a good match as the play’s mismatched pair of seekers – doubting believer and confirmed cynic, forbearing mother and impatient zaide. The director doesn’t give his talented cast much help in navigating the script’s shortcomings, however, especially in the initial scenes. As Joey, the veteran Boston-based actor Will LeBow is so pushy and unpleasant at first that it takes a while to appreciate him, and to understand why Michael, for all her pastoral tolerance, even puts up with him.

Tara Franklin, a favorite on Berkshire stages, weakens her own performance with ingratiating smiles and (if you’ll excuse the expression) saint-like patience. I longed to see a testier, more assertive woman in the early going, her calm professionalism warring not only with her inner anguish but with the desire to give this entitled schmuck a good smack.

Watching Bar Mitzvah Boy, it’s hard to avoid recalling Anat Gov’s Oh God, which came to Chester from Israeli Stage two seasons ago. Both plays are two-handers that tackle Old Testament themes of ethics and spirituality with humor, and both feature an arrogant but conflicted (male) supplicant seeking (female) professional help – in the previous case, the Almighty goes into therapy because he’s tempted to destroy the world in despair of his creation.

Oh God has more wit and a richer premise. But Bar Mitzvah Boy has more searching themes, a plotline that’s more intimate and personal, and a more heartfelt outcome.