Stagestruck: At a Crossroads on “The Road to Mecca” 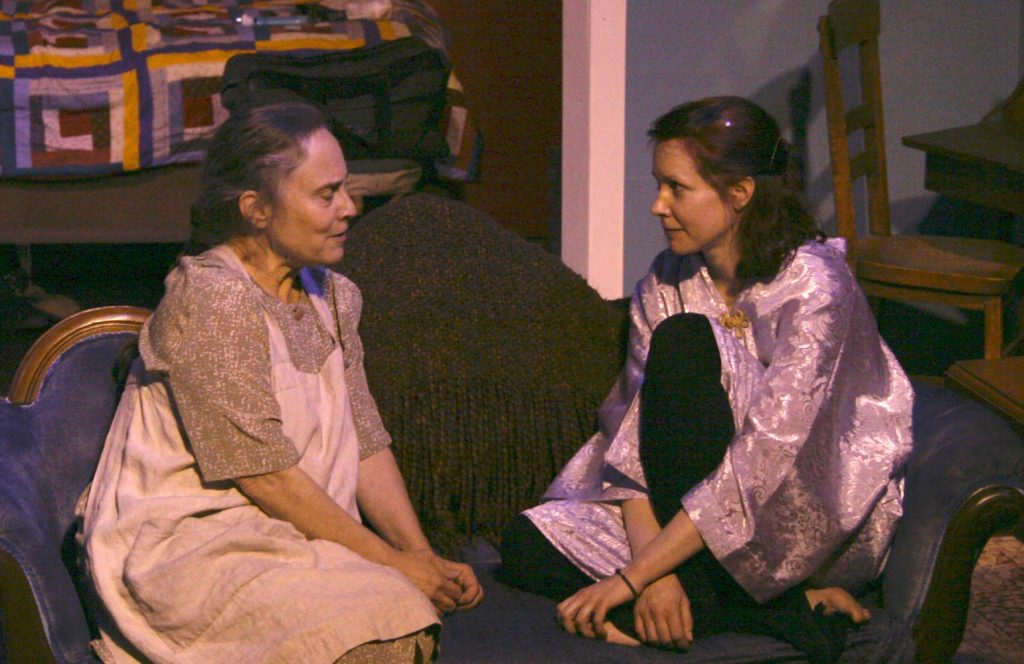 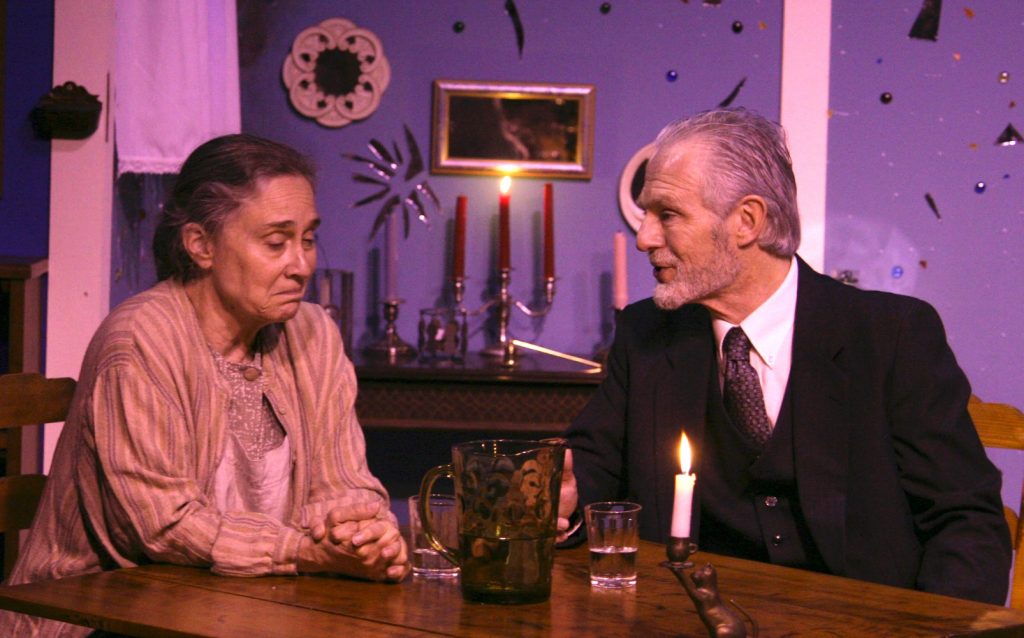 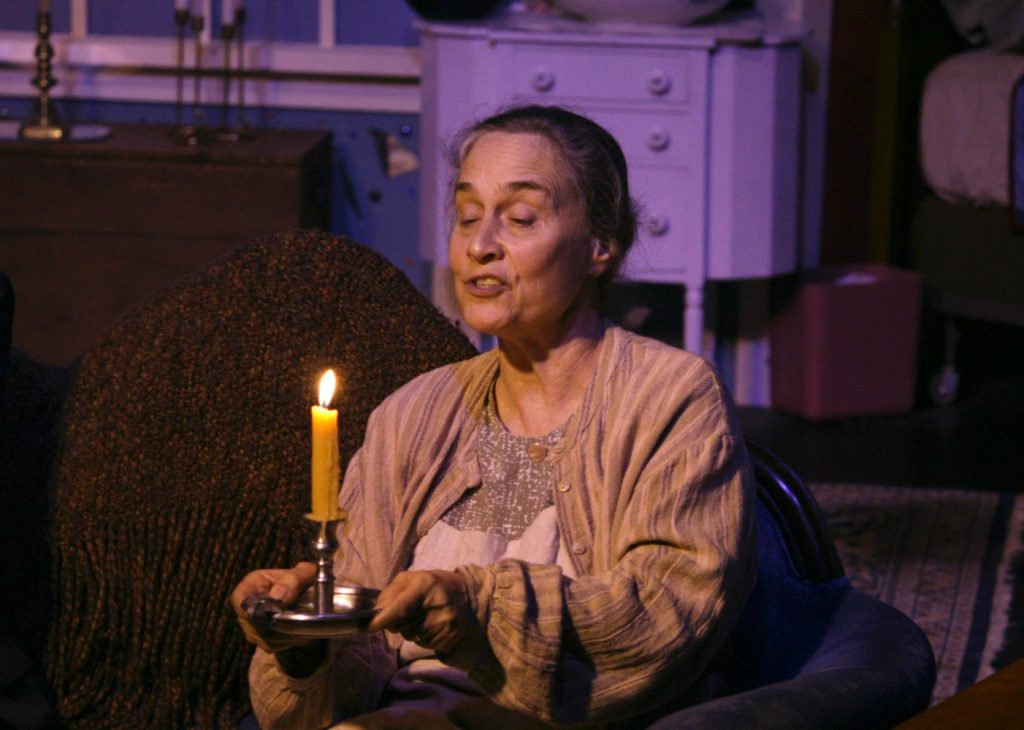 Silverthorne Theater Company has come a long way since its founding five summers ago. Struggling at first with difficult venues and miniscule audiences, the company, under the leadership of Lucinda Kidder, is now celebrating the half-decade mark with a permanent home and full houses. It’s the resident theater in Greenfield’s cultural hub, the Hawks & Reed Performing Arts Center. (Full disclosure: I’ve worked there as a director.)

Silverthorne’s four-play season, stretching from spring into fall, is attracting some of the Valley’s most sought-after performers. One of these is Jeannine Haas, who is the beating heart of Silverthorne’s current offering, The Road to Mecca.

It’s an intimate play with an expansive vision, written by Athol Fugard, South Africa’s most eminent playwright, and sensitively directed here by Rebecca Daniels. It’s based on a real person, Helen Martins, and her real but fantastical sculpture garden. The setting is her small cottage in a tiny village, all but lost and forgotten in the desert vastness of the South African Karoo.

One look at Molly Hall’s set and you know “Miss Helen” is not your typical small-town widow. Each wall is a different color, studded with mirrors and spattered with glittering shards of colored glass, faithfully reflecting Fugard’s description of “an extraordinary room” bathed in candlelight and “extravagant fantasy.” 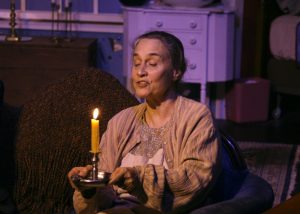 Helen is a free spirit in a hidebound society, independent and proudly eccentric but increasingly reclusive, forgetful, and depressed. In a mercurial performance, Haas gives the woman all these qualities and more, as a fierce tenacity contends with querulous uncertainty. The play is heavy with metaphor and insistent symbols of light and darkness, freedom and oppression. Haas incorporates them all into a thoroughly human character, and navigates the script’s often stilted language with a grace her fellow-performers don’t always manage.

Helen’s young friend Elsa, a visitor from faraway Cape Town, admires the very qualities for which the narrow-minded locals shun her – her principled integrity, nonconformist lifestyle, and most of all her whimsical art. Helen’s front garden, we’re told, is filled with handmade cement sculptures, a private Mecca of life-size camels and Wise Men, mythical creatures and fanciful birds.

Newcomer Mo Mosley, a native South African, plays Elsa with emotional honesty and incandescent energy. Her face is constantly alive with feeling and reaction. While her vocal delivery could use more variety and sometimes doesn’t match her physical authenticity, her focused presence helps to anchor the two women’s bond. 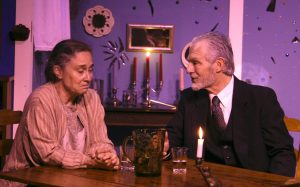 The play’s other character is Elsa’s diametric opposite – Marius Byleveld, the stiff-necked minister of the village church who, having lost Helen from his congregation years ago, is now bent on moving her into an old-age home. He is genuinely concerned for her well-being and safety – there was recently an “accident” involving candles and a window curtain – but he’s also on the side of the villagers who call her crazy and are offended by her outlandish sculptures.

Chris Devine lends the pastor a stiff formality that doesn’t entirely conceal the man’s humanity. In his effective performance we see a man who fails to comprehend that his concern for Helen’s future is an assault on her soul, and whose clerical composure is shaken by Elsa’s disdain and Helen’s obstinacy. Devine’s inexact Afrikaans accent sometimes obscures his words, though, and I wish we’d seen more of a suggestion of the suppressed feelings that provide a surprise at the end of the play.

Unlike most of Fugard’s plays, all three characters are white, but the realities of Apartheid-era South Africa are always in the air. Elsa is a teacher of Coloured (mixed-race) students and an outspoken adversary of the country’s racial caste system – a system reflected in the norms and hierarchies of the village, and which Miss Helen’s rule-breaking life implicitly defies.