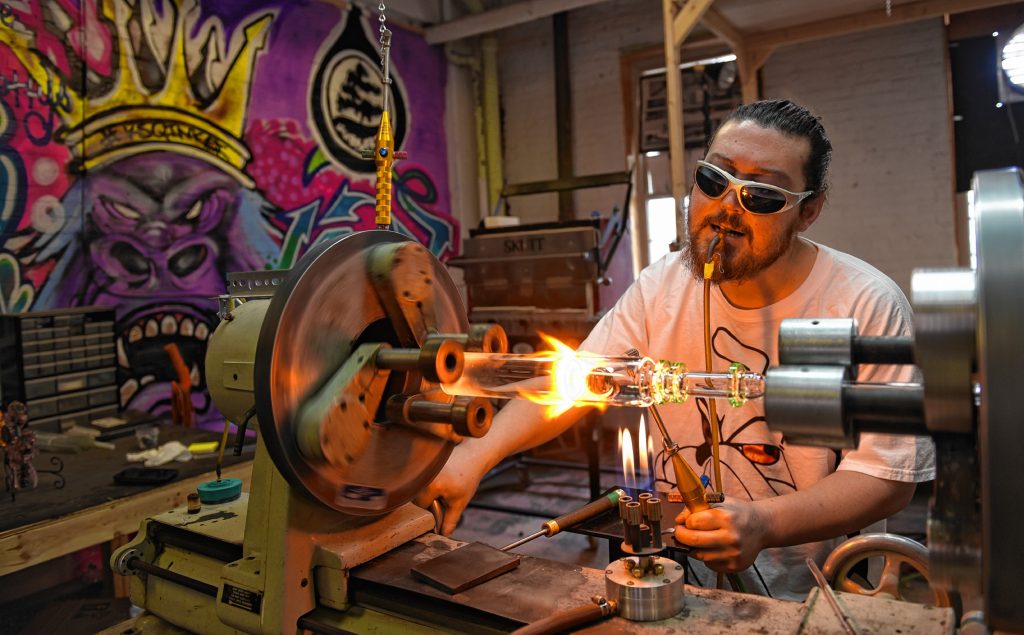 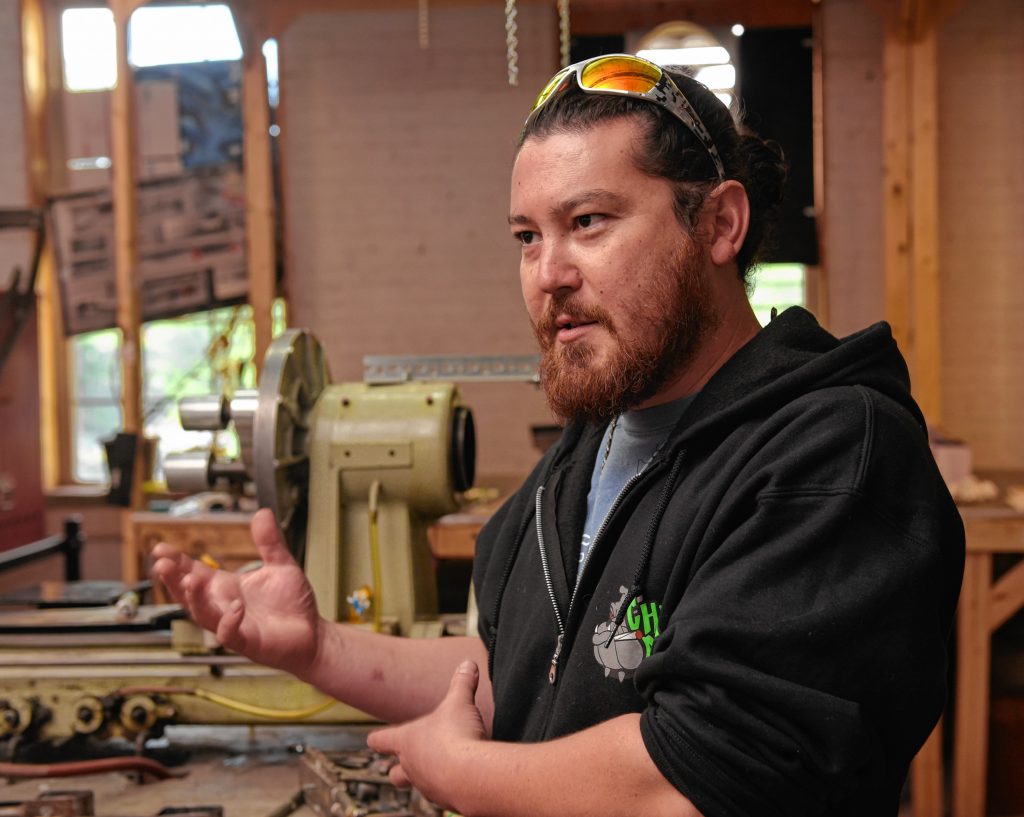 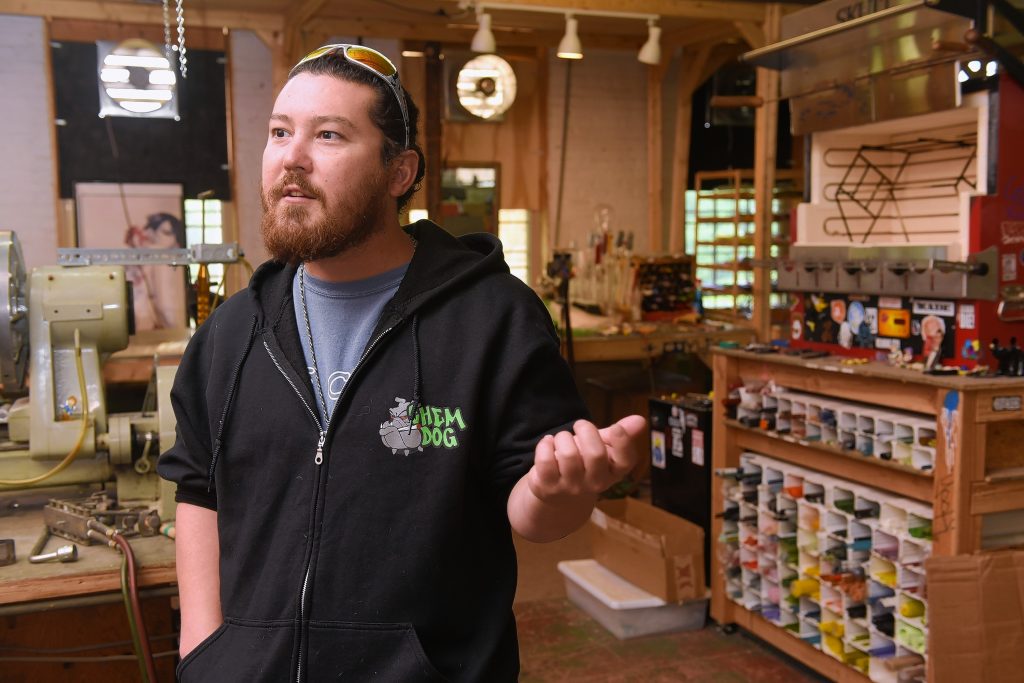 Chris Hubbard has been crafting artisanal glass pipes for marijuana smokers with his Florence-based business Akame Glass for more than a decade and thinks the stigma against weed-related glassblowing is shifting, and his industry is starting to be legitimized by the larger art world. 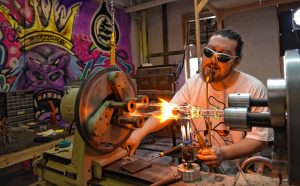 Chris Hubbard of Akameglass, works on a water pipe in his studio in Florence.

“Before the world considered us artists, we were drug paraphernalia makers,” he said. “Now that weed is legal. They’re like, ‘Oh, you’re an artist.’ I’ve been doing this since it was a felony. 1997 is when I made my first pipe,” said Hubbard, who is 37 and lives in Florence.

Hubbard made the change from a hobbyist to a professional glass blower after a SWAT team raided his studio in Bingen, Washington, on Aug. 3, 2005, after thinking it was a meth lab. He said they didn’t find meth, but did fine his weed and glassblowing equipment, which was confiscated by the police department, despite the fact that he had a medical marijuana card.

“It ended up costing me $18,000 to $20,000 [in legal fees] with lawyers and seized and forfeited assets,” Hubbard said. “When I went in front of the judge, the judge asked me what I did for a living and I said, ‘I’m a glass blower, but you took all my equipment.’ The judge said, ‘If I give you back all your equipment, will you pay your court fines?’ … That was the day a hobby became a career.”

Akame Glass ships handmade pipes across the country as well as internationally, whether that’s commissioned artistic pieces or his standard line of pipes, Hubbard said. 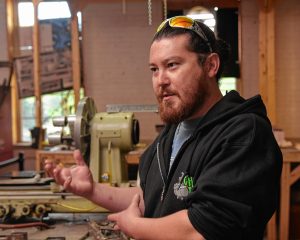 Chris Hubbard talks about the July first roll out date for recreational Cannabis.

He uses scientific borosilicate glass commonly used for beakers and test tubes for his pipes. Other equipment in his shop is borrowed from scientific glass-making — like his lathe, which holds glass in place while it’s being heated by a torch.

“When you blow glass, you have to stand behind the torch and spin it,” Hubbard said standing next to a piece of glass being molded by the heat of a flame.

Glass making is as much science as it is an artistic endeavor, Hubbard said. He got his start learning the science behind glass blowing during a class with renowned glass artist and lampmaker Bob Snodgrass, who invented color changing glass in the 1960s.

Following legislation of marijuana in states across the country, there’s been a plethora of glass makers entering the industry, Hubbard said.

“There’s a bubble bursting because there’s so many glass blowers,” he said. “Everybody thought it would be a great idea to become a glassblower … It’s a buyer’s market. There’s an oversaturation of beginner to average glassblowers. And so, it’s a time in our market where they’ll be a divide between the art glassblowers and the paraphernalia glassblowers.”

Chris and Christine Antoniello, co-owners of cannabis culture supply shop Harmony Underground in Brattleboro, Vermont, said their business carries glass pipes made by hundreds of artists, most of whom are based in the Northeast.

“Now that legalization is happening, it’s opening the whole world up to people who have more money than the average customer that we see,” Chris Antoniello said. “We’re going to grow our store to have [more artisanal glass] at our store.”

Hubbard said the stigma surrounding marijuana-related glass blowing is starting to fade. His parents, both professors at Smith College in Northampton, were skeptical about his career path at first, but Hubbard said his parents now view his business in a different light.

“They expected me to go to college and get a real job,” he said. “Dad always said, ‘The last thing I expected to have was an artist as a son.’”