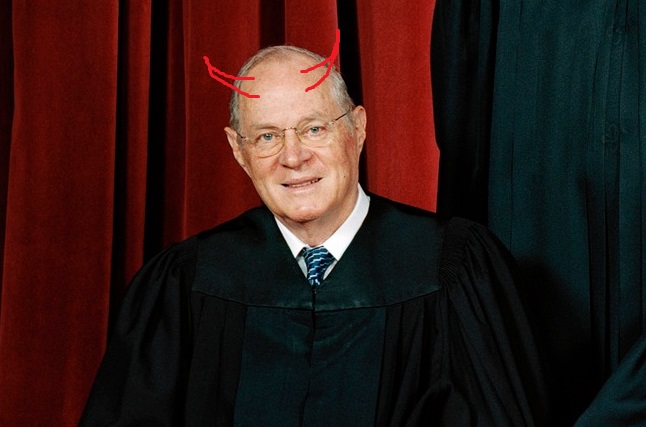 They say that elections have consequences. This is one of the terrible ones.

Supreme Court Justice Anthony Kennedy announced his retirement on Wednesday, June 27, effective the end of July. With Donald Trump in the Oval Office, and control of the Senate in the hands of Republican lackeys ready to bend to his every whim — and the decision Senate Republicans made last year to eliminate the need for 60 votes to confirm judicial nominations — it’s almost certain Kennedy’s seat will be Trump’s to fill, likely with another arch conservative along the lines of Neil Gorsuch, who Trump installed last year.

One might ask what difference this makes based on the string of disgusting Supreme Court decisions announced this week, all of which Kennedy was the deciding vote for.

Gerrymandered maps across the country will be allowed to stand because on Monday, June 25, the Court upheld a Texas map a lower court found discriminated against minorities in a 5-4 decision. The Court also refused to rule on partisan gerrymanders in three other states.

The next day, Tuesday, June 26, the Supreme Court in another 5-4 decision ruled that licensed clinics known as “crisis pregnancy centers” in California will be free to return to what the California Legislature deemed “intentionally deceptive advertising and counseling practices that often confuse, misinform and even intimidate women from making fully informed, time-sensitive decisions about critical health care,” by denying those who use their services information about low-cost abortions. Unlicensed clinics will not even be required to post the fact that they are not licensed clinics as a result of the decision.

On Wednesday, June 27, the day Kennedy announced his retirement, the Supreme Court announced yet another 5-4 decision that will weaken public sector unions, a group already under attack in many parts of the country.

And in perhaps the most disturbing ruling, the Court upheld President Trump’s travel ban, rightly known as a Muslim ban for its initial and continued targeting of Muslim majority countries. You guessed it: the decision was 5-4.

All of the above decisions likely would have gone the other way if Barack Obama’s 2016 Supreme Court nominee Merrick Garland had not been undemocratically blocked from receiving hearings in the Senate by Republicans. Put simply: Republicans stole the seat.

But at least Gorsuch, who has been a reliable vote for the Court’s conservative wing, was replacing Justice Antonin Scalia, who in a 1996 dissent on a gay rights decision equated homosexuality with murder and in 2015 suggested African American students should attend “slower-track” colleges.

With Kennedy’s retirement, a lot more legal territory is up for grabs by conservatives. Paul Collins Jr., director of the legal studies program at UMass Amherst, suggested that possible directions for the new Court are less abortion rights and more guns. Not only is the Court more likely to craft decisions along those lines, but lawmakers will be emboldened to write anti-abortion, pro-gun laws that wouldn’t have had as good a chance at passing with the current court.

“I think that legislators in conservative states are going to look at this as an opportunity to do just that,” he said.

Collins said he believes Kennedy’s legacy will be on the topic of gay rights, where he wrote the landmark decision legalizing gay marriage.

That was a big moment, but it won’t be the legacy I recall.

Kennedy’s participation with upholding Trump’s Muslim ban will taint his and the other four Supreme Court conservatives’ records. The fact that the ban now also includes some non-Muslim countries should not fool anyone. The president campaigned on a “total and complete shutdown” of Muslims entering the country. Here the Supreme Court is helping him fulfill his unconstitutional campaign promise to discriminate on the basis of religion. 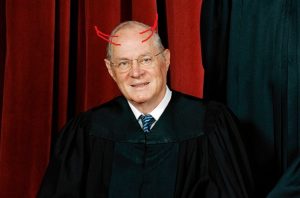 And let’s not forget Kennedy’s pivotal vote in the Citizens’ United decision, which unleashed billions of corporate dollars into our campaign system, overturning 100 years of established law keeping unlimited money out of politics. It was a law that led to the flood of Republicans, including Trump and many of the senators who stole the last Supreme Court seat, getting elected and continuing to pack the court with conservatives.

The other big thing I’ll remember: despite a curious concurrence he wrote with the Muslim ban decision, which some have interpreted as expressing mistrust of President Trump’s commitment to upholding the Constitution, he decided that now was the time to retire, when Trump was all but certain to be able to appoint his successor.

His last act was to leave us with a string of terrible Supreme Court decisions, but his worst decision of all was choosing this moment to retire.

Shame on you, Justice Kennedy.