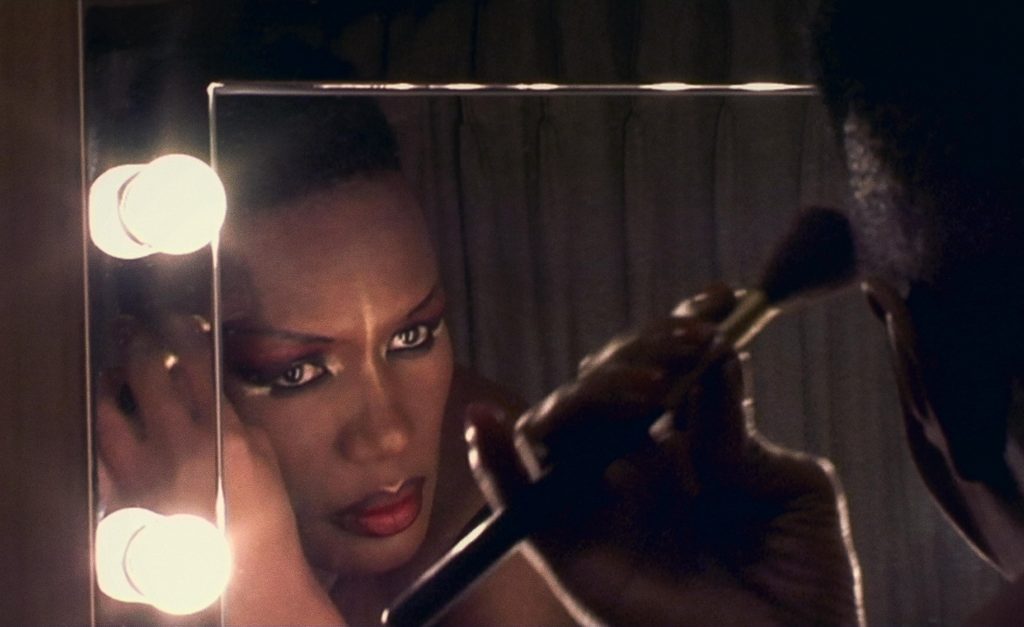 Growing up, I wasn’t often presented with images of strong women. You’d see the occasional Rosie the Riveter magnet here and there, but even then it seemed odd to me that it required sending most of the male population to an overseas war before a woman got a chance to take charge. In media, when there was a female role that wasn’t just arm candy to a higher-paid actor, it often meant the character was de-sexed as much as possible, as if being powerful and being a woman were somehow at odds.

But throughout those years, there was always one woman whose fire burned through any and all attempts to tone down who she was. And she was — and still is — many things: musician, actress, model, diva, and sheer force of personality. She was at Studio 54 on opening night. She was a Bond villain. She was an androgynous sex symbol that captivated anyone who laid eyes on her. She was Grace Jones.

Now she is the subject of a long-gestating documentary called Bloodlight and Bami, directed by Sophie Fiennes and screening July 18 at Amherst Cinema as part of the theater’s Sound and Vision film series. The title, which refers to the red light that shines outside of an active recording studio and to a Jamaican cassava bread served with jerk chicken, speaks to the two sides of Jones’ life — public and private, abroad and at home — that Fiennes spent twelve years chronicling. The result draws back the curtain on one of the most fascinating personalities of the last 40 years.

Jones, now 70, was just turning 13 when her family left Jamaica to resettle in Syracuse. In New York, she began the modeling career that would take her to Paris and beyond, and land her on the cover of Vogue. From there, she landed a recording contract with Island Records, navigating from disco to new wave as the 70s came to a close; from music, she moved into acting, with warrior-woman roles in Conan the Destroyer and that aforementioned Bond movie, where she managed the not-so-easy feat of stealing scenes from Christopher Walken.

Since then, Jones has been in and out of the spotlight, but never fully gone from the wider stage. What makes Fiennes’ film most intriguing, then, are those moments when Jones isn’t the sole focus. Visiting family in Jamaica, watching Jones’ brother preach and her mother sing in church, grounds one of the 20th century’s great iconoclasts in the same familial relationships we all experience in one way or another. As much as Jones might appear as an island unto herself, she has been formed by her history (her Bond villain glare, she notes, came straight from the way her step-grandfather stared her down), and seeing those connections only makes the icon that much more multifaceted; she shines brighter because of it.

Also this week: the annual Ashfield Film Fest is gearing up for another year of locally flavored film. While the screenings won’t take place until September, now is the time for any hopeful filmmakers to get out their cameras — the deadline for submission is August 3. As a hyper-local festival, the AFF has a few particular rules for entrants, but essentially it comes down to this: all films should be five minutes or less, and if you’re not from Ashfield, Buckland, or Shelburne, be sure your film includes a connection to Ashfield (an actor, location, or dialogue will do it). If you are from one of those three hilltowns, you’re free to tell whatever story you’d like. Festival co-chair and documentary filmmaker Christopher Seward says: “We’ve enjoyed the brilliant stories of Ashfield, both fiction and nonfiction, for 11 years now, every small town has a well of amazing and heartwarming — and even sidesplitting — tales told between neighbors. So this film festival is now eager to hear the stories of its neighbors, too, specifically our new partners in Shelburne and Buckland.” For more information and a full list of entry requirements, visit ashfieldfilmfest.org.