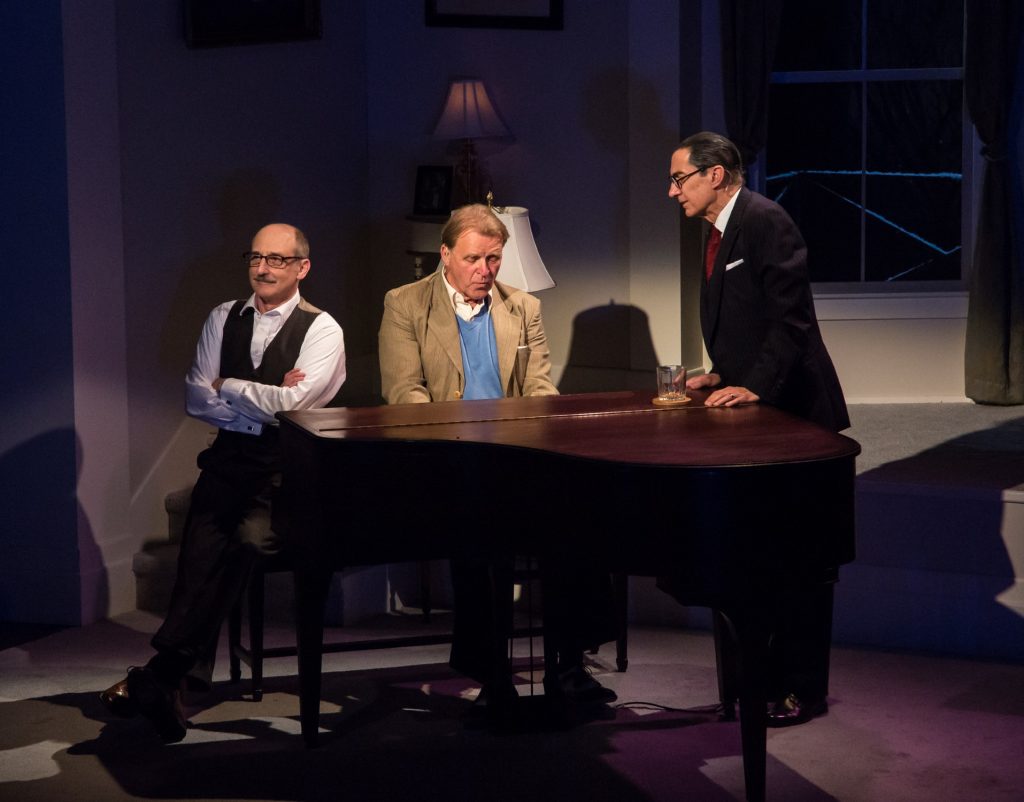 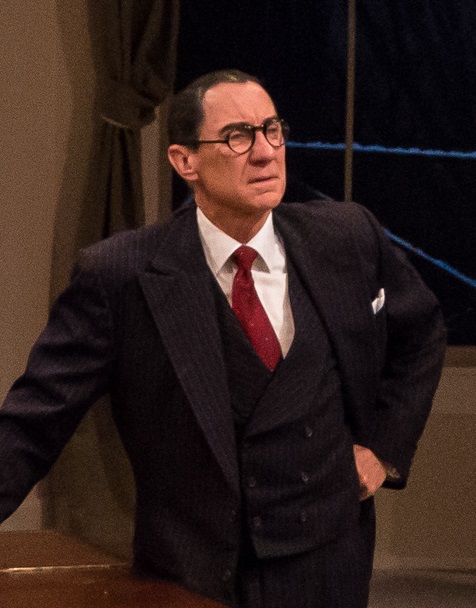 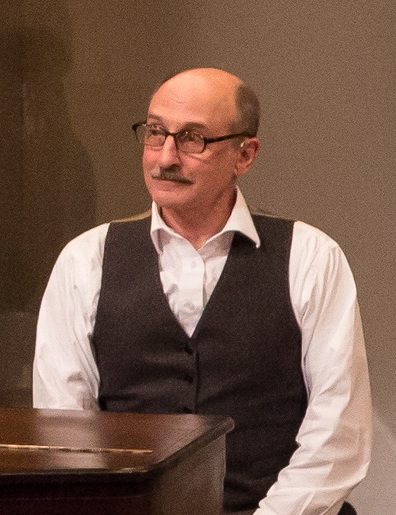 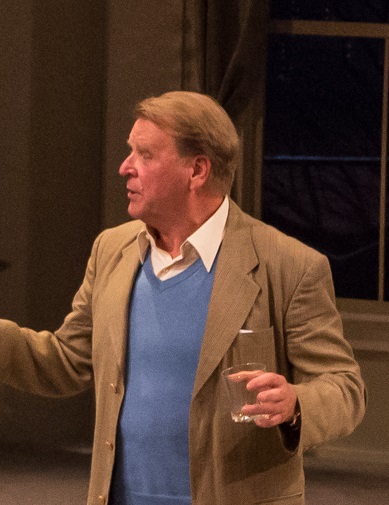 What happens when your music goes out of style? – when the teenagers are swooning over Elvis Presley instead of Frank Sinatra? If you’re Irving Berlin, and it’s Christmas Eve 1956, and the song at the top of the Hit Parade isn’t “White Christmas” but “Hound Dog,” you invite a couple of fellow songwriters over to your Manhattan townhouse to drink, kvetch, and reminisce.

That’s the premise for Lee Kalcheim’s charming and tuneful non-musical, Coming Back Like a Song! The world premiere runs through July 21 on the Berkshire Theatre Group’s Stockbridge mainstage. Based on Berlin’s real friendship with songwriters Harold Arlen and Jimmy Van Heusen, it provides a platform and narrative structure for a 90-minute medley of some three dozen classic songs. (If you’re old enough, you’ll recognize most of these perennials from the American Songbook; and even if not, you’ll be humming a couple on your way home.)

It’s not a musical – no orchestra, no dancing – more a play with do-it-yourself music, in which the characters find reasons to sit at the baby grand and break into song, their own and each other’s. There’s no singing at all for the first ten minutes, but after that the music never stops for long. 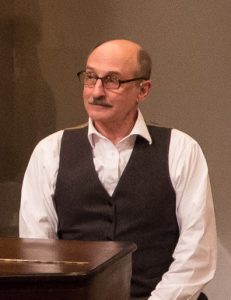 That piano is the centerpiece of Randall Parsons’ set, a grand, pillared room in which a glittering Christmas tree also holds pride of place. It’s snowing outside the windows overlooking tony Beekman Place.

Kalcheim has fashioned a bit of a plot out of the three men’s biographies, and in their anecdotes we get a sense of life in the glory days of Broadway revues and Hollywood song-and-dance pictures. The narrative is interesting in itself, not merely an excuse for song cues, as is so often the case with “juke-box” musicals. (Though there are a couple of ungainly set-ups, like Arlen’s “You know the one thing that’s given me the best songs? The weather.” Cue medley: “Come Rain or Come Shine,” “Stormy Weather,” “Blue Skies,” etc.)

Under Gregg Edelman’s adept direction, a trio of veteran players who give us some of the sharpest character work we’re likely to see this summer. 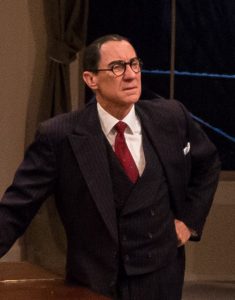 With the aid of a helmet of jet-black hair, Harold Lloyd glasses, and serious acting chops, David Garrison creates a startling facsimile of Irving Berlin. Dour and prickly, the century’s most successful songwriter (until Paul McCartney came along), Berlin carries his wealth and fame like a burden, resentful of the misperception that his songs come easy – “He writes these simple little tunes, just tosses them off,” he quotes indignantly.

Simple, maybe, but unforgettable. The Berlin earworms conjured here range from “Alexander’s Ragtime Band” to “I’ll be Loving You Always” to “God Bless America,” and of course “White Christmas.”

Philip Hoffman, as Harold Arlen, has the show’s most poignant plotline – and its finest singing voice. Throughout the evening, he shares his anxiety over his wife Anya, who is in an upstate mental hospital, and his unending love for her. “All my songs were to her,” he confesses.

Well, probably not all. As the songsmiths trade tales of the stars they’ve written for, he jokes to Berlin, “You had Astaire,” and to Van Heusen, “You had Crosby,” then adds, “I had Groucho,” and launches into the preposterous novelty number “Lydia the Tattooed Lady.” 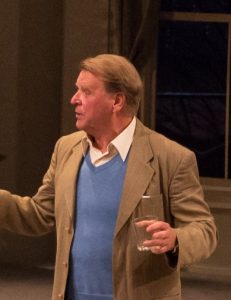 Jimmy Van Heusen is the outlier in the trio – a Gentile among Jews, a footloose playboy with a couple of married men, sartorially casual between their three-piece suits. He’s an adventurer, former test pilot, pal of Sinatra’s, gifted raconteur, and in David Rasche’s chameleon performance, the saddest of the three. The least successful, relatively speaking, he’s a multiple-martini man who flaunts a Don Juan image but speaks dolefully of an infatuation for a beautiful woman who was “out of my league.”

Along the way, we learn that all three men changed their names for professional reasons – Berlin (born Israel Isadore Beilin) and Arlen (Hyman Arluck) in order to be less “Jewish,” Van Heusen (Chester Babcock) from concern about his surname’s second-syllable connotation.

Where Berlin wrote both the words and music for his songs, the other two were composers working with lyricists. Harold Arlen collaborated with two of the best – Johnny Mercer (“That Old Black Magic,” “Blues in the Night,” and more) and the inimitable E.Y. “Yip” Harburg, with whom he scored The Wizard of Oz. Van Heusen turned out hits with Sammy Cahn for Sinatra, including “Come Fly with Me” and “High Hopes.”

Only one of the actors actually knows how to play the piano, but all three of their characters have to. Thanks to technology – two video cameras and a hidden loudspeaker – music director Daniel Mollett plays for all of them. Seated offstage at a keyboard, he is able to perfectly synch his accompaniment to the performers’ hand-mime.

Berlin sees rock and roll as “the final nail in our coffin,” but of course, the last laugh goes to these three pros and their kind. Their songs aren’t called “standards” for nothing. Half a century after rock barged in, they’re still “coming back like a song” (Berlin again) and always will. This show is proof of that.