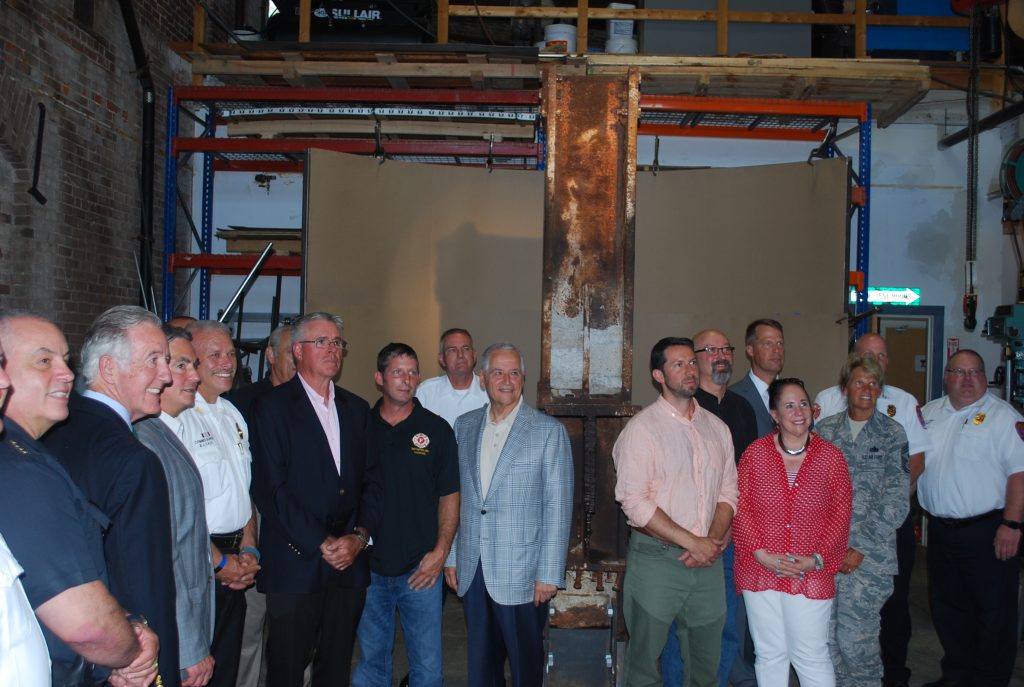 A memorial to first responders who gave their lives saving others on Sept. 11, 2001, that includes a large section of steel salvaged from the World Trade Center in New York City will be a installed at the soon to be renovated Riverfront Park on West Columbus Avenue in Springfield by Sept. 11.

A special preview of the monument was given to local elected officials, police and fire department heads, media, and others on July 10 at Florence-based Salmon Studios, which has been working on creating the memorial for the past several months.

The 9/11 artifact from the World Trade Center was given to nonprofit organization, the Spirit of Springfield by the Port Authority of New York and New Jersey, and is one of the largest steel remnants at nine-and-a-half feet tall. The I-beam will stand vertically in front of a bronze wall, which will include engravings of the names of first responders. At night, the memorial will cast a shadow of the Twin Towers on the wall and names, according to a press release.

“We came up with these ideas a couple years ago and I know it took Springfield and the Spirit of Springfield time to get the I-beam originally and then it was stored at a fire station for a while,” said Sam Ostroff, owner of Salmon Studios. “It’s taken time to make this whole project a reality. They had to raise funds. The actual construction is about an eight month timeline. We’re going to do our very best to have it unveiled on Sept. 11.”

He said from a design and artistic standpoint, Salmon Studios wanted to showcase the historic artifact while remembering the first responders who gave their lives in the aftermath of the terrorist attack.

“We don’t know where [the I-beam came from on the Twin Towers], but just having it in our studio has been emotional and humbling and really intense,” Ostroff said. “And everybody in our shop who’s been working on this project has been moved by the presence of the I-beam.”

Northampton Mayor David Narkewicz said it was an honor to be in the presence of the 9/11 artifact.

“I’m proud Sam Ostroff and his team at Salmon Studios in Florence are actually designing it and making it into what will become an incredible monument on the riverfront in Springfield, not only for Springfield, but for all of Western Mass,” Narkewicz said.

Congressman Richard Neal said the memorial will be a testament to the innocent people who died on Sept. 11.

“It’s a memorial to the innocent because the people in those towers were innocent,” he said. “And to call attention to the fire and police and first responders … They volunteered to jump into the fire trucks and the police cars that were on their way to the tragedy. In that moment, they had no idea they were going to meet their fate as well,” Neal said. “To visit, within a matter of days as I did, to see the smoke still coming out of the ground and to see those families still looking for a loved one.”

He said the terrorists who committed the attack were in Afghanistan and that 17 years later there continues to be a United States military presence in that country.

“We have a million and a half new veterans from Iraq and Afghanistan and they deserve our support,” Neal said. “It’s not just the memorial to those who were tragically killed that day, but to the ongoing sacrifices that these families make every single day on our behalf.”