Infrared saunas: Sweating it out — in a dry heat 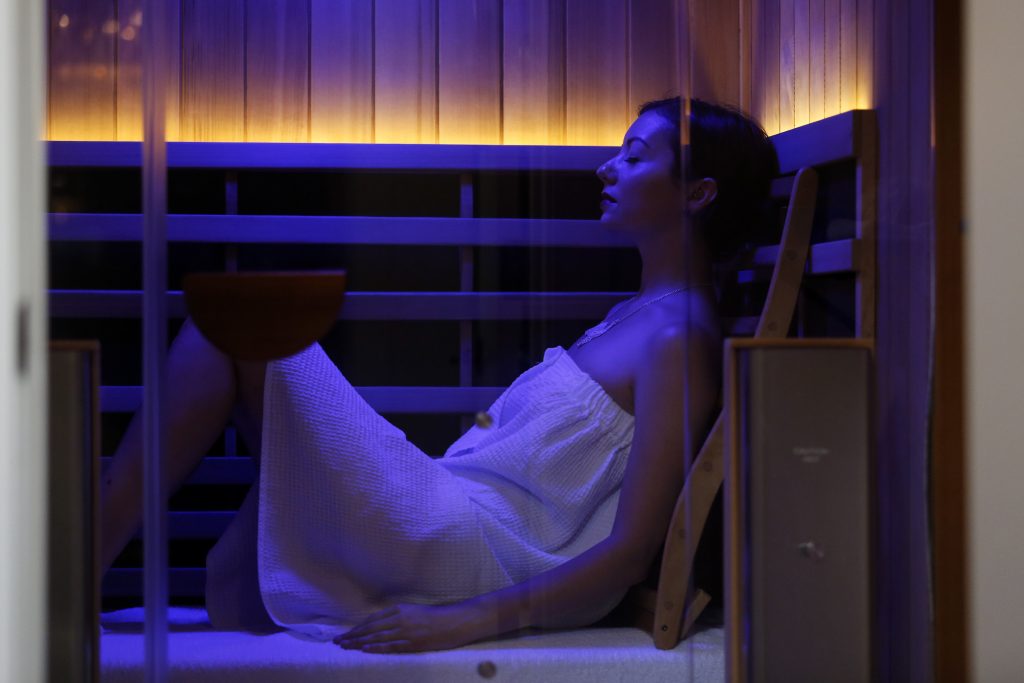 It’s warm — very warm. I’m sitting on a wooden bench leaning against an ergonomic backrest. The small room within a room is lined on three sides by cedar paneling with a glass door looking out into a small dim entryway where towels had been provided to wrap myself in. There is a chromotherapy light on the ceiling designed to provide different colored lighting to ease various ailments: blue light to fight inflammation, orange for respiratory illnesses, etc. I scroll through the Netflix selections of the iPad affixed to one wall and select waterfall sounds. Closing my eyes, I begin to sweat.

Nestled between the shops on Main Street in Northampton is Thelō Home and Modern Wellness, a retail store specializing in furniture, art, accessories, and interior design. While the ground floor of the shop is an aesthetically pleasing, high-end boutique, a walk down the stairs to the bottom floor reveals a spa-like atmosphere with two doors, behind each of which is a small personal sauna room. 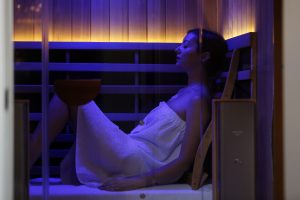 The saunas at Thelō, however, aren’t traditional wood heated rooms filled with steam. Here the heat is generated by infrared light. Infrared light is produced naturally by the sun at wavelengths that are invisible to the human eye, though it does produce warmth. Behind the slats built into the walls of the sauna are units that emit the infrared light.

There are several differences in the experience of these saunas as opposed to traditional Finnish saunas. Traditional saunas are heated to about 180 degrees. Water is ladled over hot stones to create the steam, which precipitates sweating. After a sauna bath, people usually cool off in a pool or shower.

With the infrared sauna, the heat gradually builds to 145 degrees and can be regulated more precisely by a digital panel in the sauna. There is no steam with the infrared. Instead, it is a dry heat and you begin to sweat later in the session.

Thelō owner Mikala Hammond said that the delay in sweating is how you know it’s working. “The deeper penetration and lower temperature means it takes longer to sweat,” she said. A 2015 peer-reviewed study stated that full spectrum infrared radiation that the saunas use can penetrate 3-4 centimeters, about an inch and a half, into the subcutaneous layer of the skin.

The sweating may begin later, but it is a vigorous sweat. Water is provided for each client at Thelō and you’re encouraged to hydrate throughout the session. If the temperature becomes too much, clients can simply open the glass door to vent some of the heat.

“It really helps to aid in creating a more healthy lifestyle,” said Sarah Buonocore, a 33-year-old aesthetician. Buonocore began using the infrared saunas in November 2017, but stopped when she became ill with a tumor in her intestine that required several blood transfusions. After having the tumor removed three months ago, Buonocore decided to start using the infrared saunas again, “mostly for the detoxifying benefits and inflammation,” she said.

“When you leave you just feel lighter and healthier,” Buonocore said. “You have more energy. I just feel really good afterward.”

She is currently going once a week for six weeks while she heals from her illness, but said she plans to go monthly afterward. She sets the chromotherapy light to pink to help with blood cleansing.

The manufacturers of infrared saunas claim they can help customers reduce wrinkles, lose weight, and detoxify the body of heavy metals and toxins. In fact, the makers claim that an infrared sauna “detoxifies seven times more than traditional saunas.”

However, Dr. Catherine Forest, a clinical assistant professor at the Stanford University School of Medicine said in an interview with the New York Times, “We do not have data that shows one can sweat out toxins in any meaningful way.”

While not all claims made by the manufacturers have been verified or debunked, studies have shown that there are benefits to infrared saunas. For example, the same 2015 study examined the possible post-exercise physical benefits of infrared saunas on healthy men. They found that an infrared sauna “appears favorable for the neuromuscular system to recover from maximal endurance performance,” due to the deeper heat penetration, the lower temperatures, and mild humidity involved.

A separate study published in the Canadian Journal of Diabetes found that the use of infrared saunas,“may be beneficial for lowering blood pressure and waist circumference,” while another study in the journal Clinical Rheumatology found that infrared sauna use has, “significant short-term beneficial effects,” during rheumatoid arthritis treatment and, “no adverse effects.”

There is plenty of evidence to support other claims, as heat has long been known to provide relaxation, relief of aches and pains, and stimulate the circulatory system. The use of saunas in general, as a form of “thermal vasodilation therapy,” has been shown to be beneficial to those with coronary risk factors.

Whether infrared saunas are just a new wellness fad or they are the miracle cure they have been touted to be, one thing is certain — they are a relaxing respite from the daily routine.