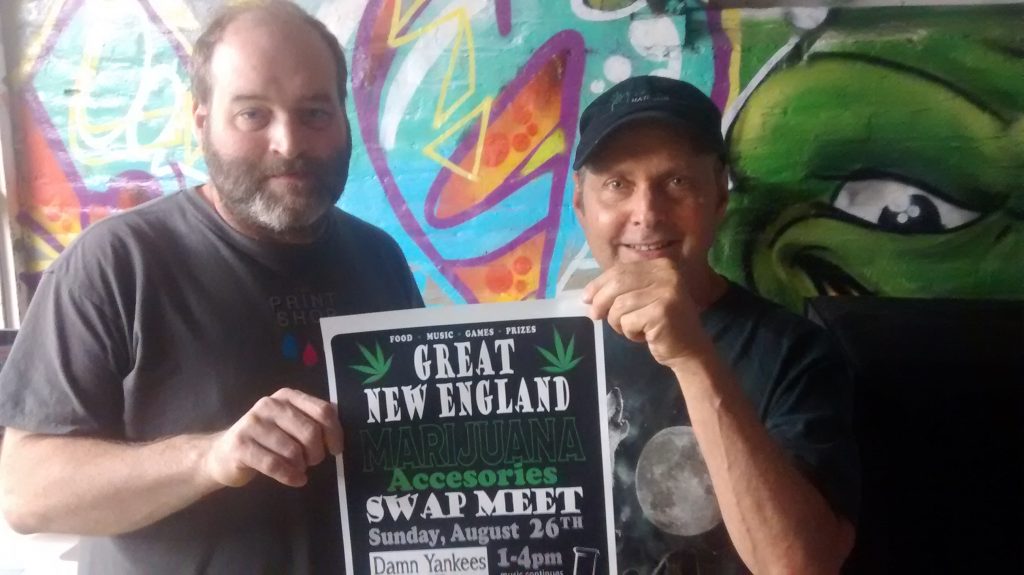 The Great New England Marijuana Accessories Swap Meet will be “like an Antique’s Roadshow for bongs.” According to Jeff Bianchine, director of the Holyoke Creative Arts Center, which will benefit from the fundraiser event, potentially hundreds of people swapping, selling, or purchasing marijuana accessories and two appraisers of marijuana accessories available to buyers or sellers.

The bong swap is slated for Aug. 26 at Damn Yankees BBQ & Tavern (formerly the Waterfront Tavern) from 1 to 4 p.m. with local live music continuing until 7 p.m, and also featuring food, games, and prizes. 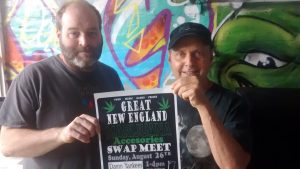 Mark Sherry, producer of the Valley Music Showcase, which highlights original songwriters and bands in the Pioneer Valley through a musical competition series at New City Brewery in Easthampton, said as far as he knows there’s never been a bong swap anywhere open to the public that aims to raise funds for the arts with marijuana legalized in Massachusetts.

“Frankly, I noticed that my roommate had several bongs that she couldn’t obviously use at the time and had just bought a new one and I said, ‘The old one is beautiful. Are you going to use that? Oh, no. I guess I’ll just retire that,'” Sherry said. “People would love to have something like that and I thought, ‘Wouldn’t it be kind of a cool idea if she had gone out and been able to trade that with somebody for something she wanted.”

He said due to Massachusetts laws smoking on the premises and swapping or selling marijuana is prohibited.

“This is a way to get people together who are cannabis friendly people and now that we have this new law that we’re legal to use marijuana in this state, it just seemed to me to be just a cool event to put together,” Sherry said.

Sherry said he connected with Bianchine and the two organizations developed a partnership to make the event a fundraiser for the arts in Western Massachusetts. The Valley Music Showcase is also transitioning into becoming a nonprofit tentatively named The Western New England Music Alliance, which would foster local original music in western New England.

“The Holyoke Creative Arts Center is going to be our fiscal agent for the Western New England Music Alliance,” Sherry said. “Basically, we’re collaborating and the fundraiser is for both of our organizations.”

Private sales of bongs and other marijuana accessories would be handled much like a tag sale, Sherry said.

“It makes sense to start creating a used market for this stuff,” Bianchine said. “Now, legally we can do this in a tag sale environment without feeling like we need to be embarrassed or ashamed because we smoke illegal dope. Right now it is the Wild West, so the Creative Arts Center could use this as an opportunity to sort of put its foot on the ground level of growing some cannabis culture an economy here in Holyoke or in Western Mass. The Arts Center used to be funded by the city, now we’re completely self sufficient. We don’t have any subsidizing anymore and we have to find new angles. This is going to be a huge thing in Western Mass.”