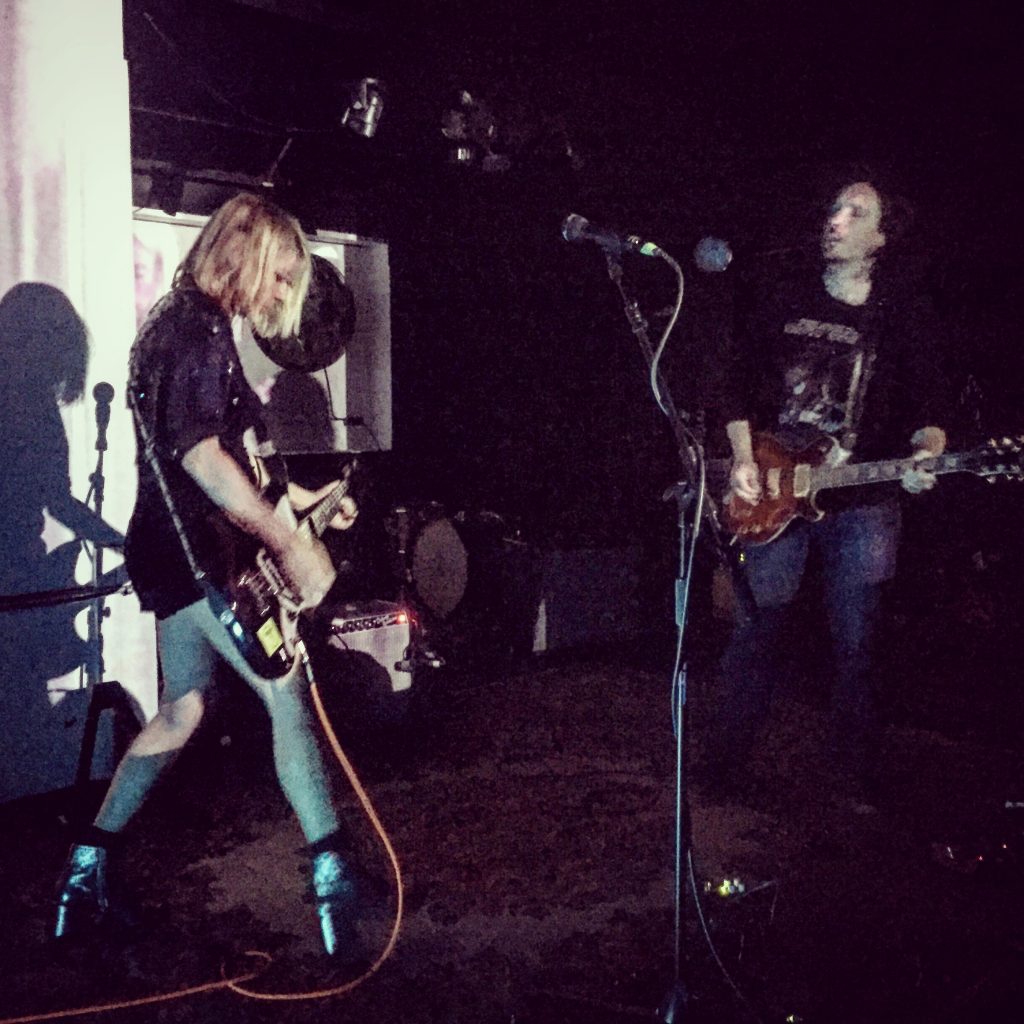 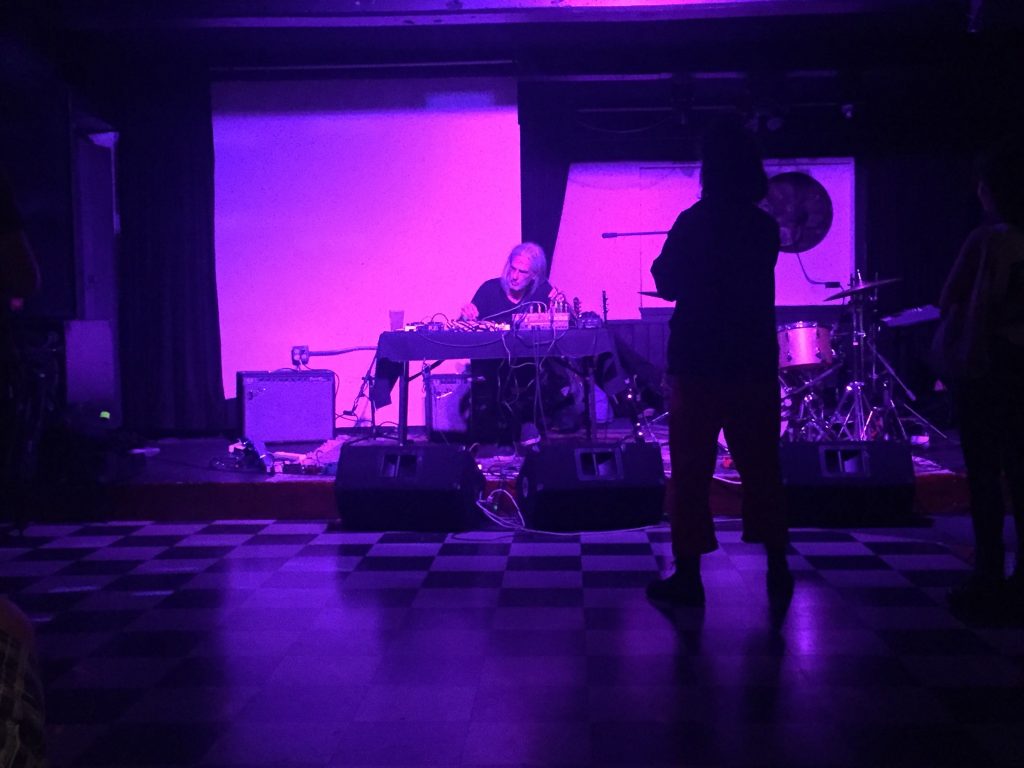 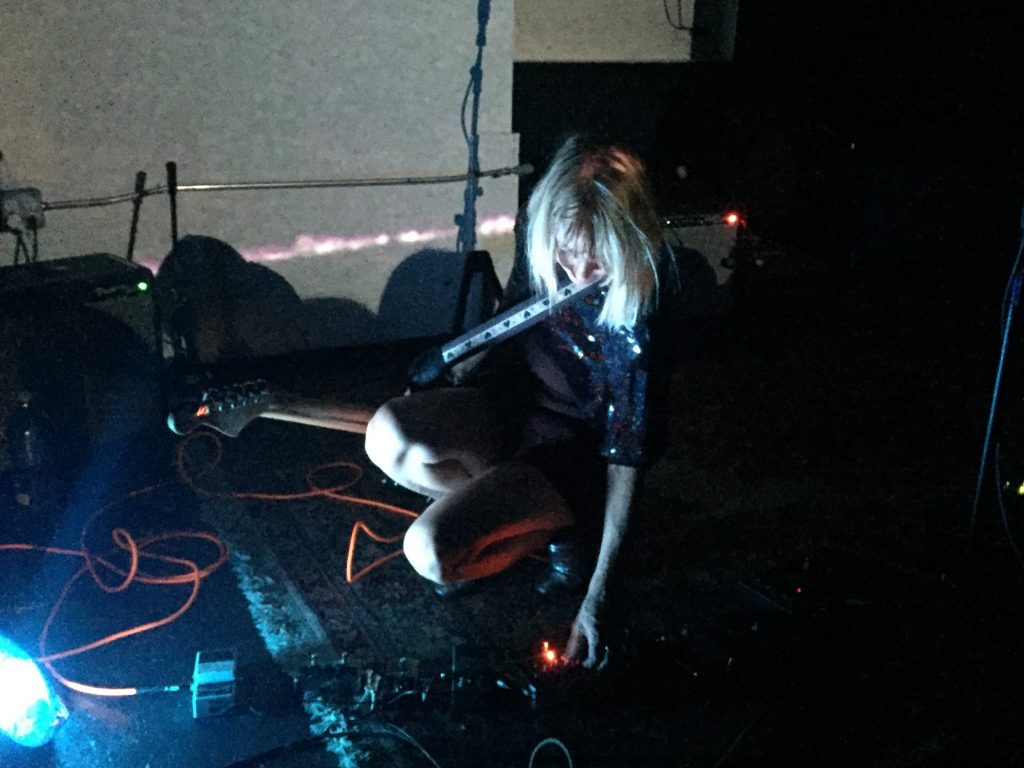 I have been to a handful of noise shows at The Root Cellar in downtown Greenfield and I just love the vibe. So, I gave up my usual lazy Sunday night and made my way over to check out the happenings. I sat at the bar and finally had the pleasure of ordering a Coconut Ginger Libation (so good, and I’m NOT a coconut fan). My sparkly leggings illuminated a blue tint under the neon lights at the bar. I moved over to a table set up for four all by my lonesome. In a way, I prefer going to shows alone. I soak up everything. Engaging in conversations I may not have had if I wasn’t solo. The bass of the speakers got louder as Jake Meginsky DJ’d a cassette-only mix. Lights dimmed as we got closer to showtime. 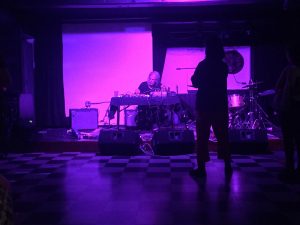 Head of Wantastique sat down at the card table full of sound machines and the purple and red lights bounced off the serious look on his face as he produced sounds from these knobs. Eerie piano bits mixed with droning space-like beats. The disco ball on the ceiling was working with the lights to make a continuous flow of dancing circles to the music. Then he picked up a black Epiphone and included electrifying guitar notes to the mix.

The eclectic cassette mix snapped us out of our zone-ville. I ventured around. Said hello to Bill Nace (of Body/Head) and picked up the new Body/Head The Switch on vinyl, a coveted purchase I’d been holding out on until this show.

The place became packed. And there wasn’t a specific age bracket either, which I love. Music has no age restrictions. I grabbed an empty chair at a table occupied by a nice couple. And Gunn/Truscinski duo grabbed our attention.

Their dual guitar/drum concoctions emerged as a noise-like orchestra that even the people that don’t normally dig noise-styled music could enjoy. They had a bluesy feel to them, and a hint of tribal from the drummer. I think their intensity comes from their eye contact while playing, like they’re reading each other’s minds to blow our minds. I caught myself twirling my hair, staring, while tapping my foot … that means I’m fucking gone, to who knows where I go in a musical trance. They ended their set with a droned-out mix with a noise machine next to the drum kit and the guitar pedals. 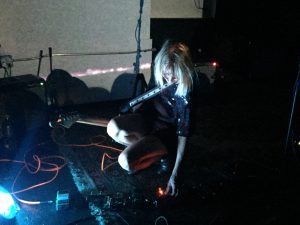 After a short break, everyone gathered to the black and white checkered floor underneath the dancing disco ball. With the cassettes still playing, we awaited the arrival of the closing performance by Body/Head.

The lights dimmed and the stage was barely lit. Guitar duo Kim Gordon and Bill Nace made their way to the stage. On the white walls behind the stage a movie played on the projection screen in slow-mo and the disco ball continued its dance with purple circles.

I always check out Kim’s fashionable outfit every time I see her. And this time her silvery space-like boots caught my attention. She’s wearing the same boots on the album cover for The Switch.

Kim and Bill both swayed back and forth with their guitars hanging from their bodies. The noises emerging from the instruments were unique to say the least — plucking and scratching at the strings, fiddling with the knobs on the pedals to produce even more sounds, and Kim and her haunting vocals. Definitely one of my favorite performances I’ve seen them play.

And now … The Switch

I opened the vinyl I purchased at the show, the fresh new smell emerging as I crumpled the thin plastic wrap in a ball. Carefully I opened the album cover and pulled the shiny black record out of the inner sleeve. Poured myself a glass of wine and placed the needle of my vintage suitcase record player I’ve had since a kid onto The Switch.

Opening track “Last Time” kicks the album off with the familiar eerie stringed sounds that Body/Head are notorious for, producing an effect just the like sound of tuning a guitar while the strings are still loose on the neck. It repeats over and over in an orchestrated fashion. Kim’s haunting vocals come through about half way into it, soothing you from the nightmarish (in an unbelievably good way) sounds.

“You Don’t Need Me” continues the flow. There are warping noises of strings played artfully instead of by the book. Sometimes it’s hard to tell that you are listening to two guitars — pedal manipulation at its finest.

The last track on Side A, “In The Dark Room” in fact reminds me of being alone, in a dark room. You’re huddled in the corner of a room, knees up to your chin. You see a shadow, but you’re too scared to check it out. You hear something move behind you, but you are frozen in fear. Then you feel the hot breath on your neck and all hairs stand up. With the scratching sound of the distortion and the wailing of the guitars, and Kim’s echoed vocals, this is one to listen to in the dark and let your imagination run wild.

I flipped over the record to Side B — only two tracks on this side. “Change My Brain” picks up where Side A ended. A concept album of experimental noise. Kim’s chants get louder throughout and she brings in the harmonica that blends into the ghostly sounds.

As the ending track “Reverse Hard” came on, I knew the album was nearing closure. If clouds had a sound, the opening of the song I would describe as that — clouds. Or maybe white noise, like a fan. Then slowly and faintly, and filled with static, you hear the familiar wailing of the dual guitars that have been telling us the story since the beginning of the album. It keeps at a steady pace, then the middle of the track gets louder with Kim’s vibrating vocals, then it slowly drifts away.

Recorded in July of 2017 at Sonelab Studios in Western Mass, and engineered by Justin Pizzoferrato also from Western Mass, this is my new favorite album. I plan to make some weird, eccentric masterpiece while painting with this playing in the background.