Cinemadope: ‘The Judge’ stirs the stagnant waters of the Middle Eastern judiciary 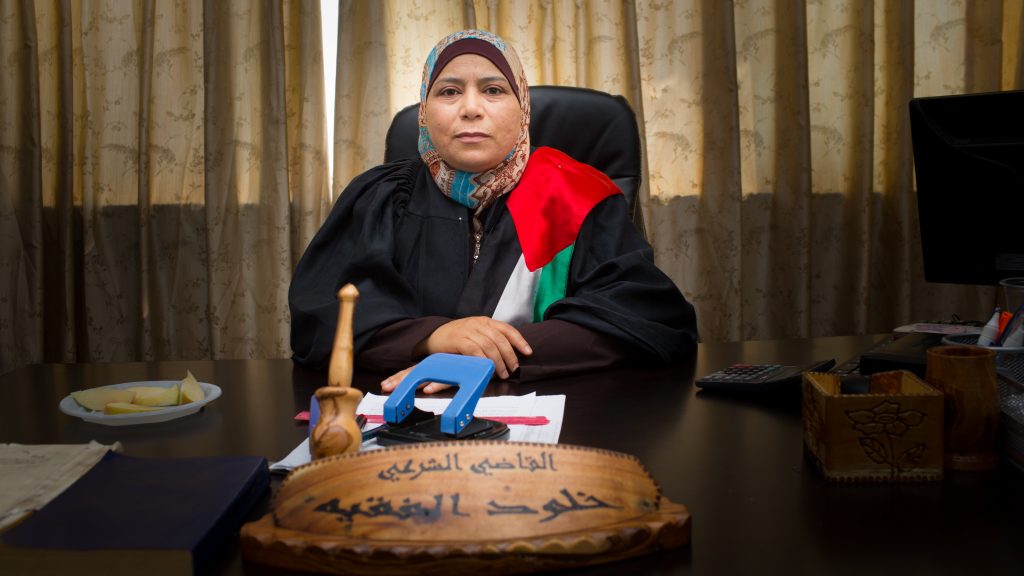 Back in my art school days, I was always fascinated by my art history classes. Seeing our changing world reflected back at me through the lens of artistic evolution made the lives lived in the distant past seem much more like my own — less a mannered bit of historical style, and more about finding creative ways to process the issues of the time.

One of the artworks that has stayed with me from those days is Judith Slaying Holofernes, a 17th century oil painting by Artemisia Gentileschi. It’s a visceral work, depicting the story from the Book of Judith, in which Judith and her maid behead the drunken general Holofernes — here frozen in time as Judith is drawing the blade across the general’s neck, rust-colored blood stains running over the edge of the bedding. Its already considerable impact was deepened when my professor went on to explain that the painting’s Judith was a self-portrait by Gentileschi, and that the face of Holofernes actually belonged to Agostino Tassi, the man convicted of her rape (a conviction, shamefully, later annulled). Gentileschi, like so many women throughout history, was more than a match for the male-centric world that sought to keep her down. In the coming weeks, three films highlight the stories of some remarkable women — creative, political, and politically creative — of our own times.

The Judge is director Erika Cohn’s portrait of Kholoud Al-Faqih, who not long ago became the first woman judge to be appointed to the Middle East’s Shari’a (Islamic law) courts. To give a sense of the historical shift that statement implies: the Shari’a courts have been in existence for over a millennia. And though they often deal with the domestic issues that any court sees — divorce, domestic abuse, custodial rights — few thought to ask why the lives of so many women were being ruled on by so many men. It was a tradition so entrenched that it was assumed to be law, and yet (as Al-Faqih’s research discovered) it was only long-held custom that had kept women off the bench. When she brought her findings to Chief Justice Sheikh Tayseer Al-Tamimi, he helped her get her appointment to the bench.

Cohn’s film charts the judge’s career alongside her personal life, peeking in on her husband and their children and visiting with her parents. (Western viewers may be surprised by the film’s marriages: while Al-Faqih’s marriage will seem more traditional, the Chief Justice who appointed her has three wives; four are allowed under the law.) And while Al-Faqih herself continues to stir what she calls the “stagnant waters” of judicial tradition, it is a bit surprising to see so many Palestinians — lawyers and everyday people, men and women — push back against the idea of female jurists. In a time when many around her still believe that women are too emotional to sit on the bench, Al-Faqih calls for women to “be our own advocates.”

Also at Amherst is Here to Be Heard: The Story of the Slits. Formed in London in 1976, The Slits were an all-female punk band that was described as “a feminist explosion onstage.” Their story, chronicled here by filmmaker William E. Badgley (Kill All Redneck Pricks), covers more than three decades of musical ups and downs (with a sizable amount of downtime after the mid-‘80s) until the 2010 death of lead vocalist Ari Up. Presented here as part of the cinema’s Sound and Vision series, Here to Be Heard brings an important piece of music history back into the spotlight.

And on August 8, Forbes Library and The Resistance Center for Peace and Justice present a screening of Conviction, director Brenda Truelson Fox’s documentary about three Dominican nuns who broke into a missile silo in Colorado to protest the rising nuclear arsenal of the U.S. (they drew crosses on the walls using bottles of their own blood). Convicted and sent to a federal prison, time has turned the nuns into icons: Sister Ardeth Platte, now in her 80s, inspired a character on Orange is the New Black (she did her time at the same Danbury prison as author Piper Kerman; they did yoga together). If you’re wondering what you can do to make a difference, this is a good place to start.