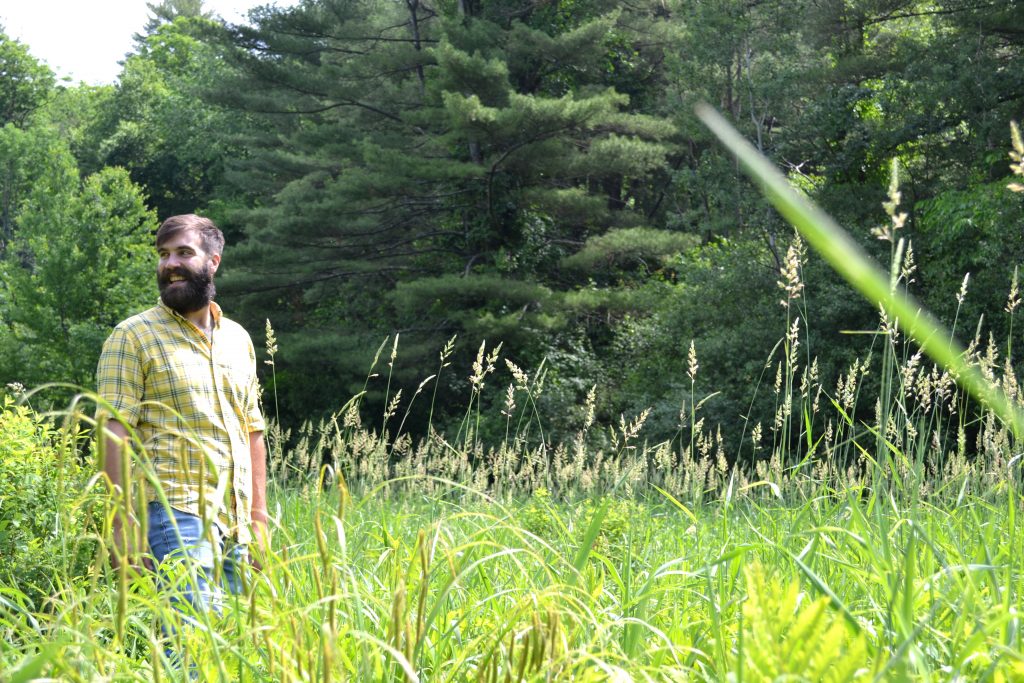 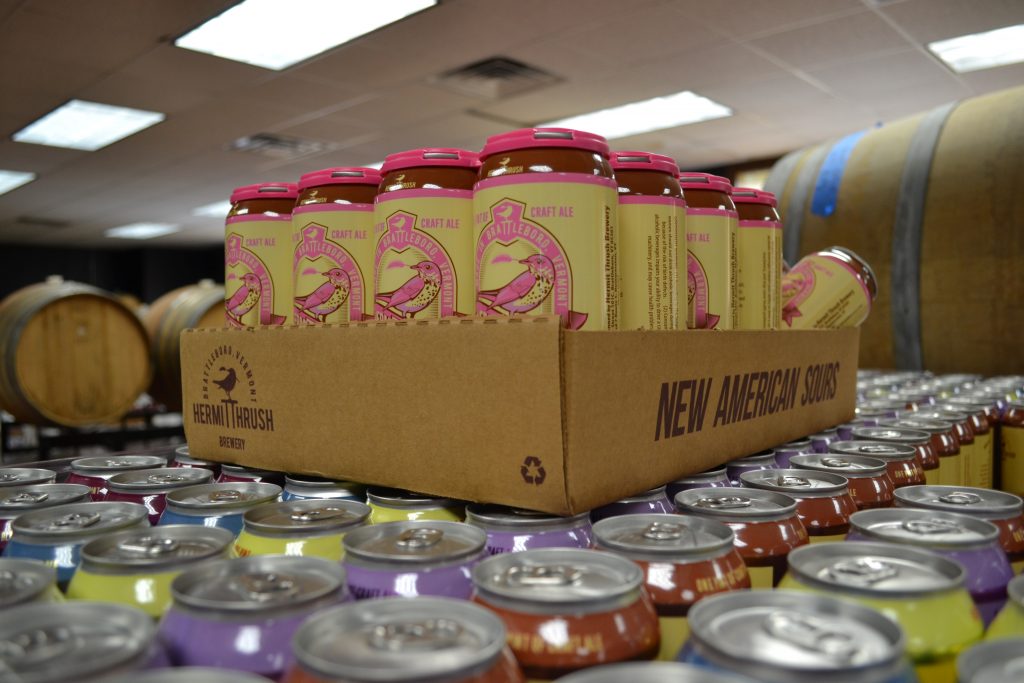 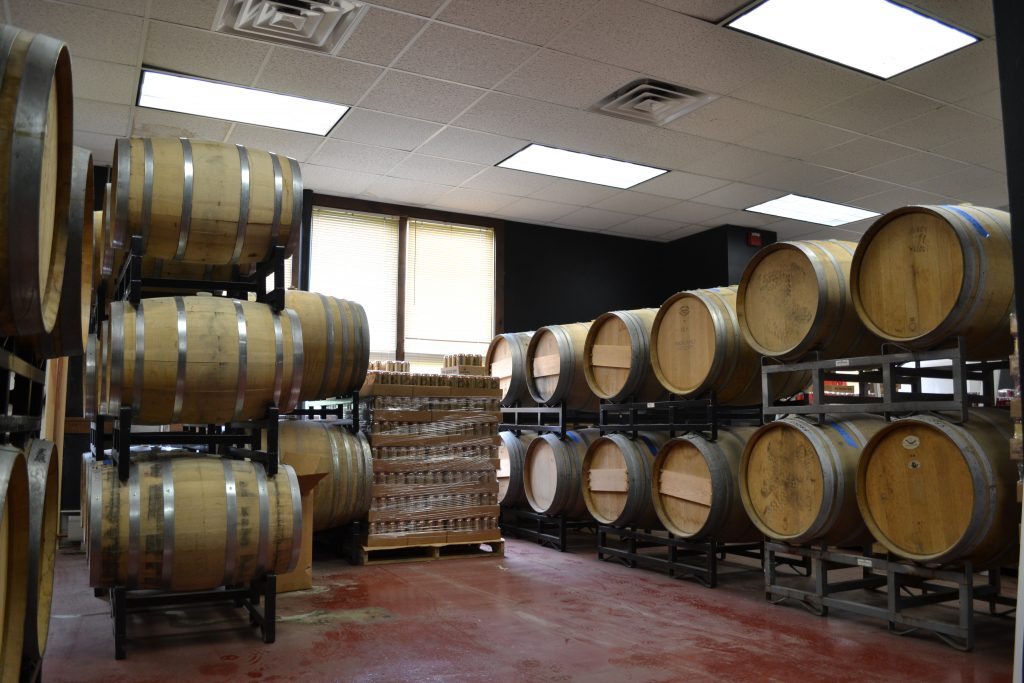 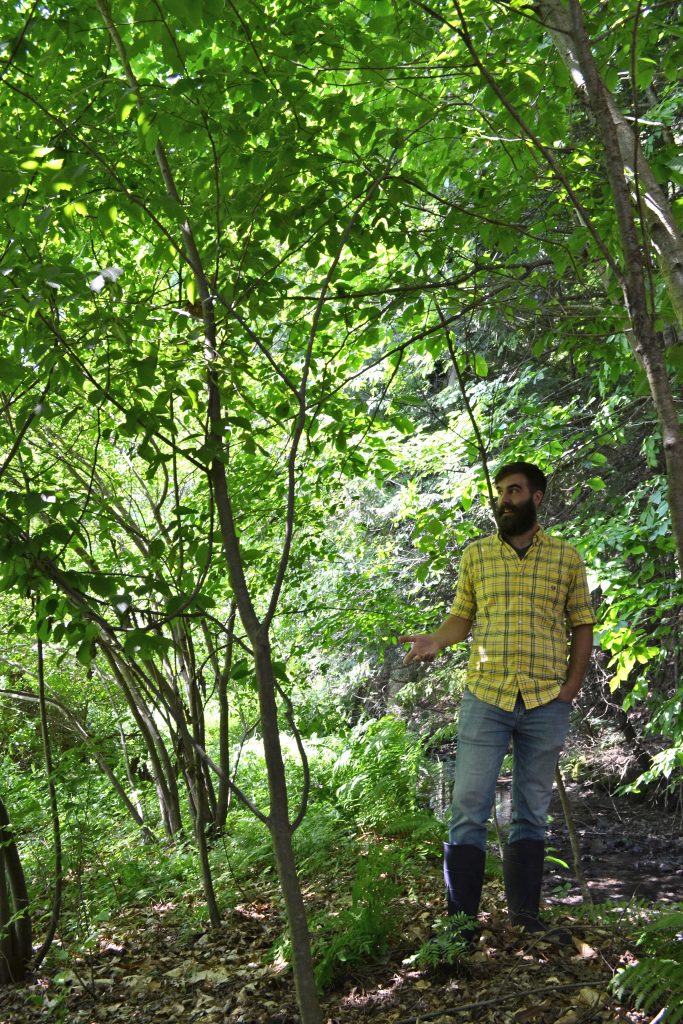 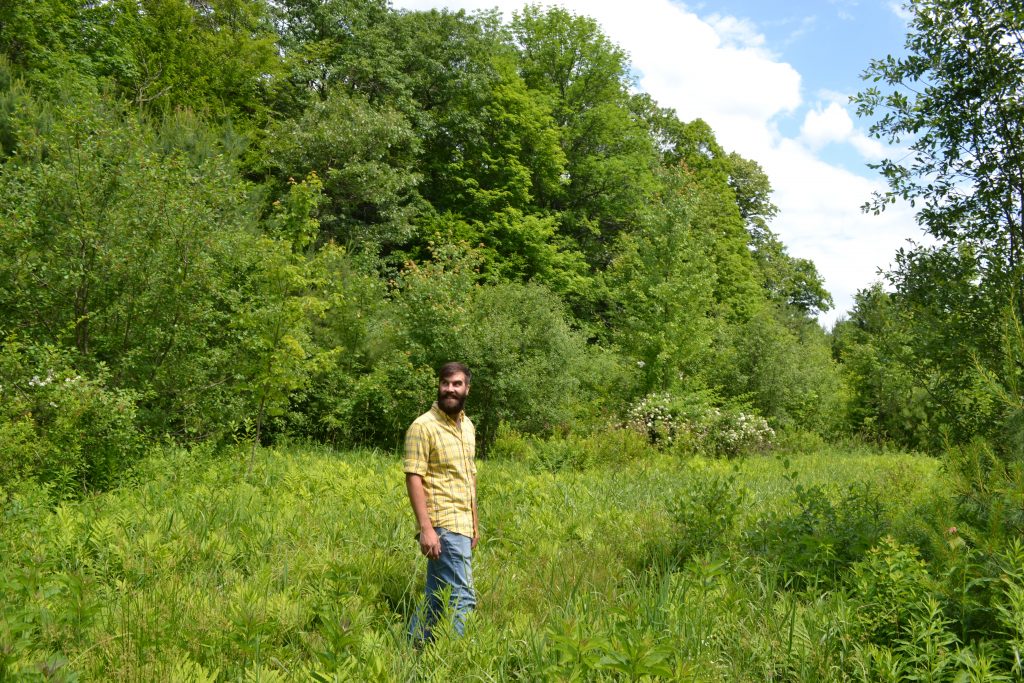 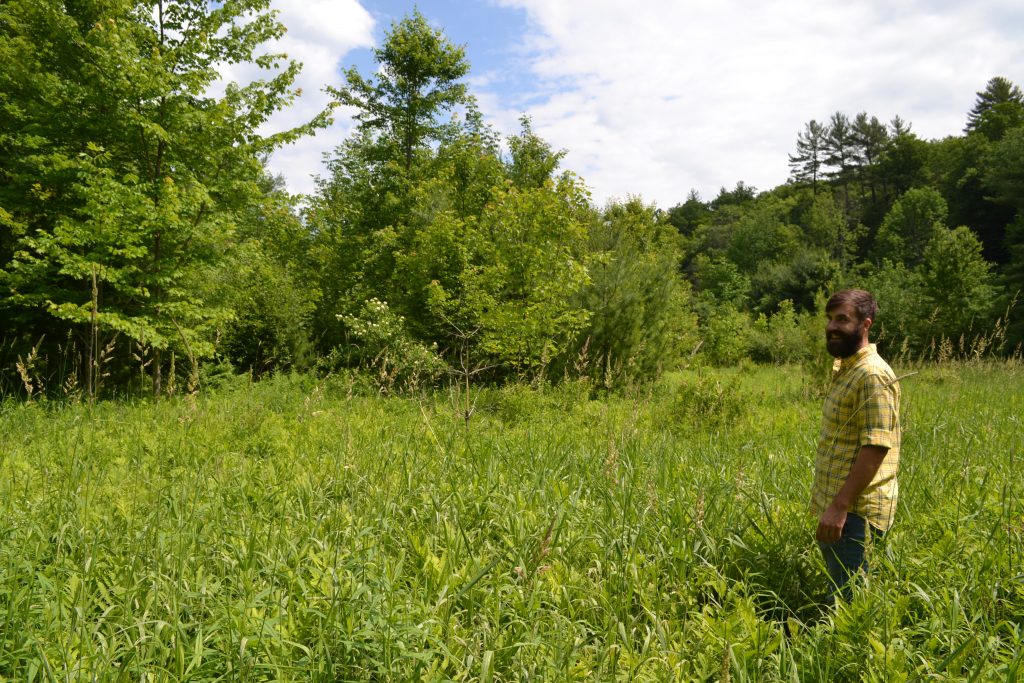 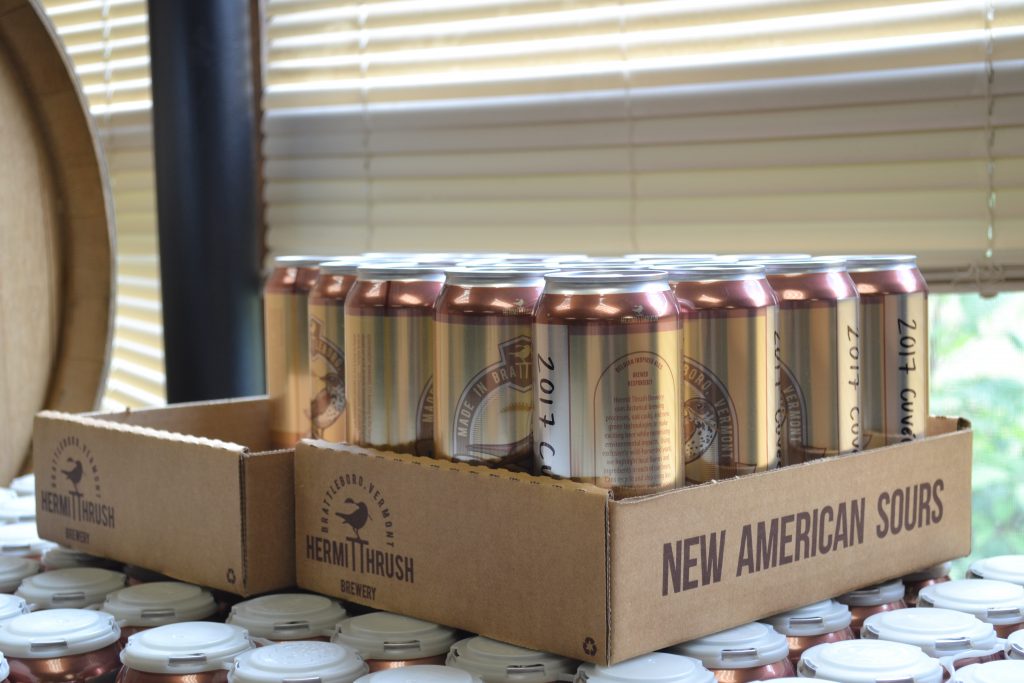 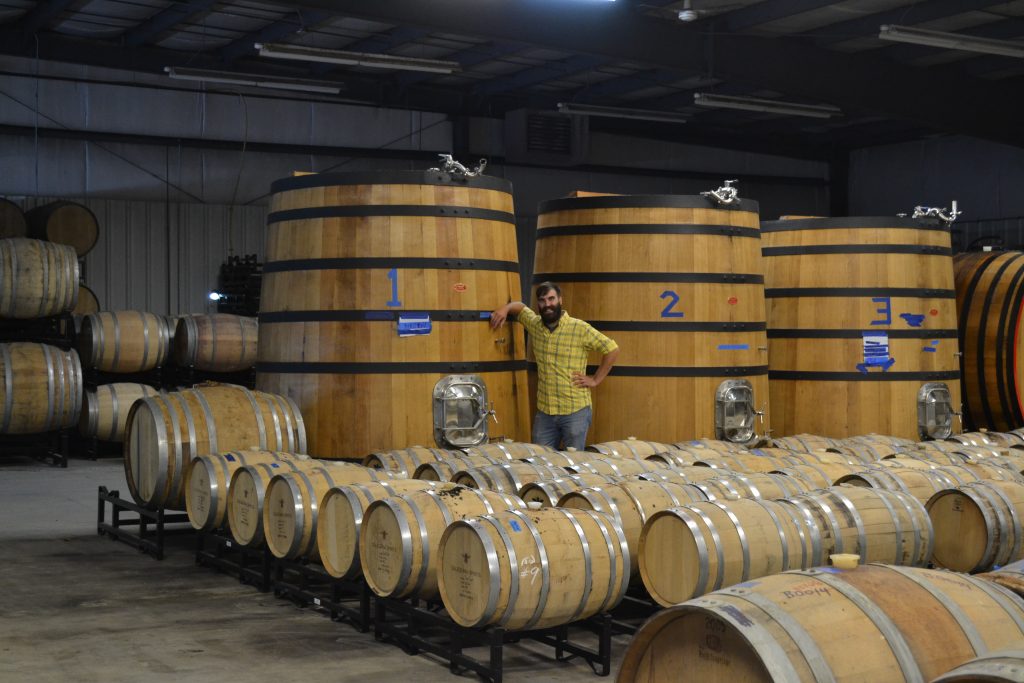 The opportunity doesn’t arise much in downtown Brattleboro, where Gagné and his team opened their brewhouse and tasting room on High Street in 2014. There is plenty of wildlife, however, on the seven-acre wooded property that Hermit Thrush is currently lease purchasing in the nearby town of Dummerston.

There have been fox and turkey sightings here, but Gagné is most excited about the deer paths running through the grass and trees along the brook. “Deer tend to take paths of least resistance,” he explains, “and they look for food supplies that are relevant to yeast. We knew there was a channel of wind and good conditions here, because the deer are coming through.”

Yeast is the mutable fourth ingredient required to make beer — along with water, malt, and hops — and it’s a major reason the Hermit Thrush team has based their expanded operation on this land for the last year and a half. The property features a sizeable shipping and production facility formerly owned by Pepsi,which the brewery plans to grow into over the next few years.

When selecting a location, however, it was also important to Gagné that the outdoor landscape support his quest to find yeast.

Hermit Thrush makes only sour beers. Some, like the popular Party Guy and Po Tweet recipes, are kettle sours made in stainless steel fermenters. Far more of the brewery’s inventory are barrel sours aged in gin, rum, and wine barrels. It’s impressive to walk through the new facility and see these barrels made of French, American, or Hungarian oak. Some are fairly small, but others can hold thousands of liters of liquid. 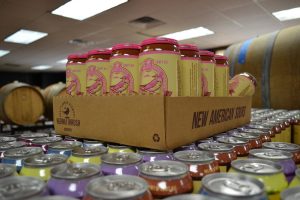 Those enormous barrels, called “foeders” in French, have long been popular in Europe for fermenting and aging large batches of everything from red wine to cognac, but have caught on lately in America as wild and sour beers have become more popular. Gagné is dwarfed by them as he walks past.

He keeps going and heads out the door, climbing through the tall grass behind the facility. I follow. We’re on a yeast walk. Some of Hermit Thrush’s coolest stuff is a result of wild fermentation, which relies not on a single kind of yeast but on multiple strains, all of which come from the surrounding environment. Gagné seeks wild microbes like pediococcus and lactobacillus, as well as saccharomyces and brettanomyces, to characterize his beers with hyper-local flavor.

He does this using a large, shallow, open-top tank called a coolship, which is great for quickly cooling down freshly-brewed beer but also allows for passing microbes to fall into the hot liquid, altering the flavor as yeast populations feast on the sugars created during the initial fermentation.

Coolships are nothing new — the American term comes from the Dutch/Flemish word ‘koelschip,’ and breweries like Allagash in Maine have been using them for years. But just as the precise location of planted grapes affects the taste of a vineyard’s wines, wild-fermented beers take on unique characteristics of the yeasts feeding on nearby sugar sources, such as apple trees.

Gagné has discerned notes of apricot in the yeast he’s collected here, as well as a nuttiness that reminds him of pecans. These new flavors are already affecting the beers Hermit Thrush sells.

This isn’t to say that there are literally nuts in the air. Many of the flavors we associate with such foods come from yeast in the first place, he explains. “Flavor compounds come from yeast just as much as they come from actual fruit,” he says, “which is how we’re able to make a lot of beers that taste fruity, but that actually have no fruit in them.”

By now, Gagné and I have reached the bank of a sun-dappled brook, where the deer pass through. The brook bends here, which creates a slight eddy in the air that concentrates humidity. Because the air moves more slowly in this eddy, it’s more likely to drop particulate — some of which is yeast picked up from wild fermentations already happening nearby. This is a site he tested during talks of acquiring this property, using a miniature version of a coolship that he left outside, filled with hot beer.

“It’s just been boiled, therefore it’s sterile,” he says. “You’ve also already added your hops, which are antibacterial. The beer is the perfect pH and perfect diet for yeast.” The beer cools, hot and pasteurizing. When it drops to 100 or 90 degrees, it begins to suck in oxygen from the air. “Yeast needs oxygen to reproduce,” Gagné explains.

As long as the prevailing winds are passing through good yeast sources — like farms, orchards, and maple trees — the beer will grow more complex. “When yeast colonize a broken fruit, they protect it with alcohol rather than rotting it from the inside out, like a bacteria does,” says Gagné. “There’s always yeast on fruit.”

“I think it’s beautiful, once you really experiment with it,” he adds. “Try a few wild beers from one brewery and a few from another — especially ones that are over a year old — and you can see that there’s a cohesive flavor profile just based on the brewery’s location and complexities in the yeast. You can really taste where your beer is coming from.” 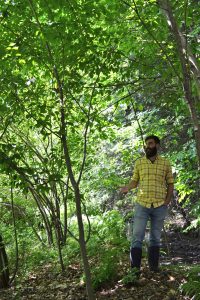 When Gagné shifts his weight, his rubber boots crunch in the leaves. He looks happy.

When he moved up here from Philadelphia a few years ago in search of a good small business environment and a closer connection to nature, he brought along a personal library of 40 yeast strains stored in small tubes called slants. He uses those less often these days, as Hermit Thrush has shifted over to maintaining a house culture with Brattleboro yeast, plus various experiments and discoveries using the coolships.

That may sound unpredictable, but Gagné says the yeast he finds here is best adapted to right here. “Part of our consistency comes from just letting it run,” he says. “If we make beer for our environs, and trust our environs, it generally won’t disappoint us, because these fermentations all have the same impetus. Rather than making it all about an end flavor target, I’m just trying to make beer for yeast to do its proper thing with.”

There’s certainly room to play. “We’re watching the market, and sours are the hot new thing,” says Gagné. “Sours right now are basically IPAs in 1989 or 1992. There’s education to be done, but people are catching on. The quality is improving. Palates are differentiating. There are more sour entries into the marketplace. I’m just excited to be timed well. We want to keep making the cheap, good stuff.”

Hermit Thrush ships exclusively in cans, which costs less and uses less energy than distributing glass. Gagné is committed to passing that savings to the consumer. There’s a bigger, greener mission here too, since the brewhouse is fueled by with wood pellets, which largely cuts fossil fuels out of the equation. And the yeast, of course, is exclusively wild-harvested.

“Sour beer is such a vast category,” he says. In his mind, a brewery that offers just one sour beer risks alienating beer fans who haven’t yet found a sour they like, potentially turning them off from sours altogether. “You can’t just have one. It’s like asking if someone likes IPAs by having them only try one.”

That’s why most of the story of Hermit Thrush plays out here, outside. Gagné is encouraged to see more American brewers aging sours that can compete with the traditional (and expensive) imported Belgian barrel-aged sours. “We can make them here,” he says.

Emphasis on ‘here.’ Brewing techniques can be honed as a global community, but the yeast in southern Vermont will always tell its own story of a place — and produce beer that no one else can make.