Stagestruck: End-of-summer shows in the Berkshires — food for fun and thought 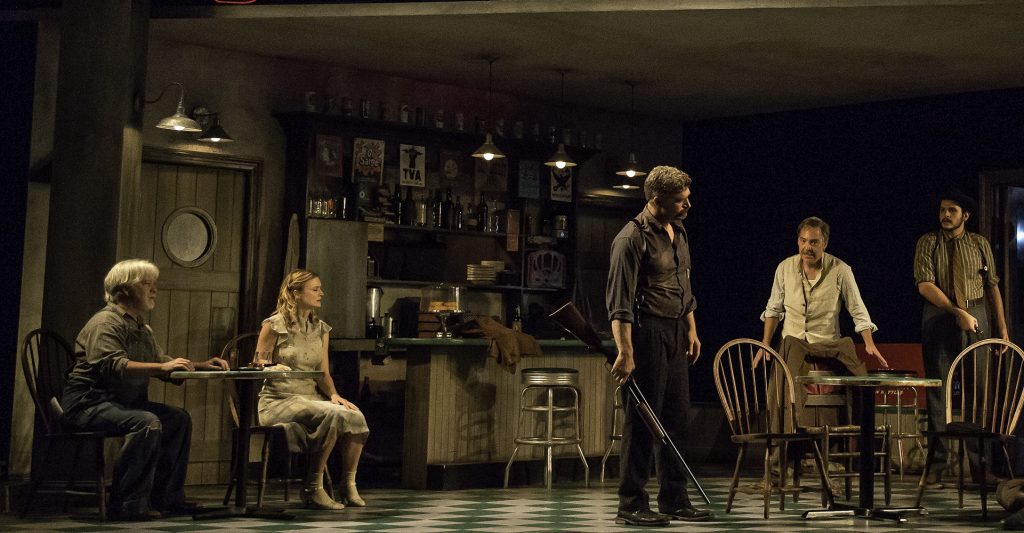 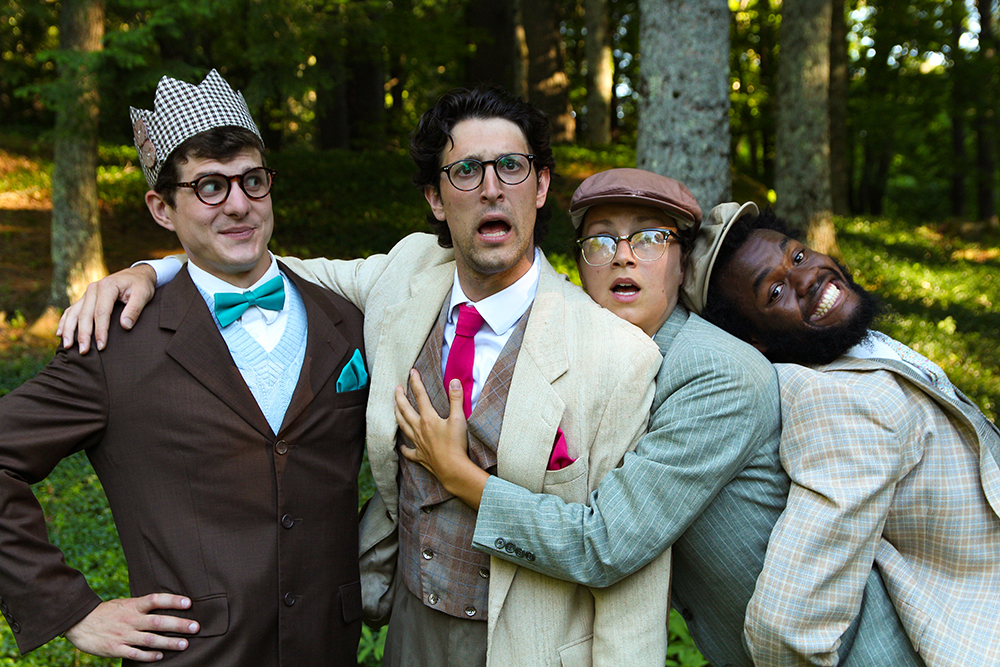 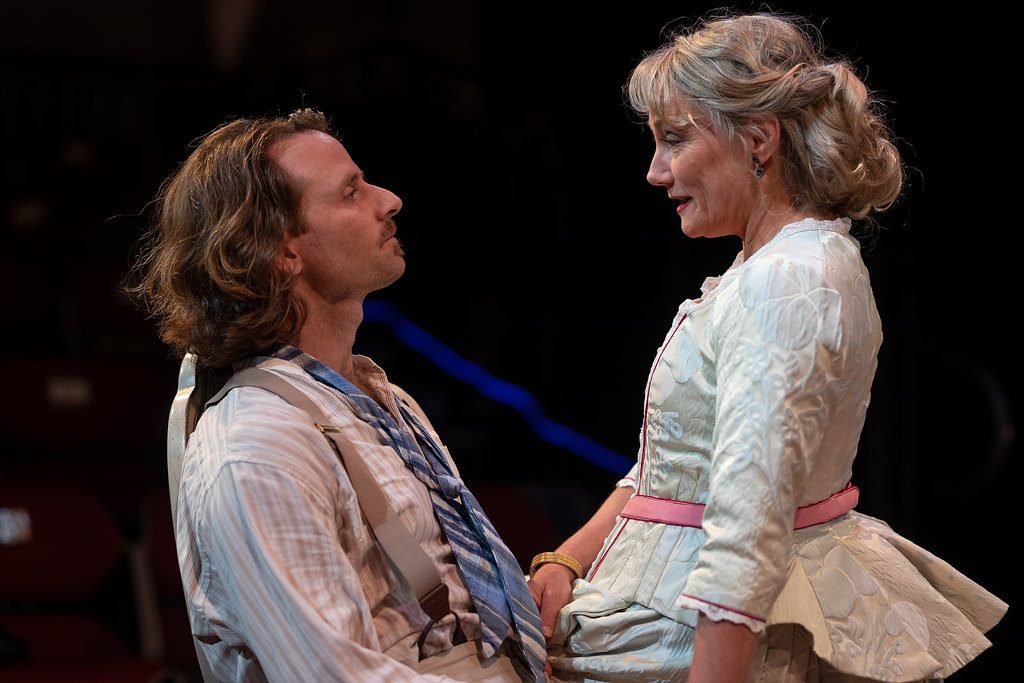 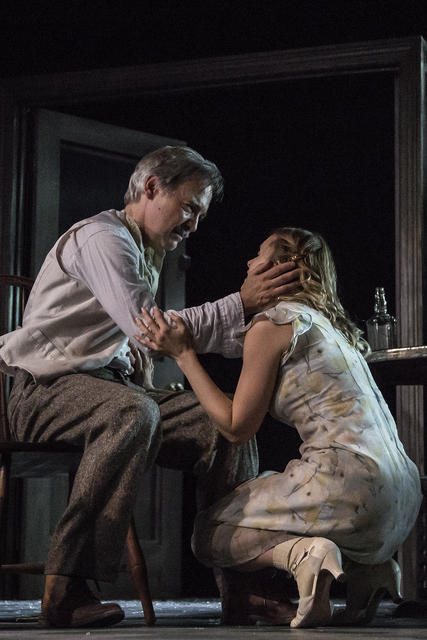 When Shakespeare & Company first set up shop in the Berkshires, their mainstage was a greensward before a wooded glade at the Mount, Edith Wharton’s Lenox estate, with the audience seated on folding lawn chairs. That tradition has lately been revived, with outdoor performances at their present home in Lenox, as well on the grounds of the Mount, just down the road.

The productions are generally the Bard’s comedies that have some excuse for being outside. This year’s offerings are As You Like It (more on that below) and, at the Mount, Love’s Labor’s Lost, a courtly rom-com with a not-quite-happy ending and a generous helping of rustic foolery. 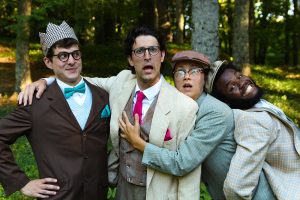 The performance, running through August 18th, fields an energetic troupe of young professionals, most of them familiar faces from past S&Co seasons. In Kelly Galvin’s lively, amusingly anachronistic production, with a text stripped of some of its more flowery flights and trimmed to a swift 90 minutes, they scamper over the wooded hillside and among the spectators. The actors’ challenge in the open-air expanse is to speak loudly and broadly enough to be understood, without yelling or losing the sense or slipping into ham, which some performers achieve more effectively than others.

The rom-com part involves a monastic pact made by the young King of Navarre (Rylan Morsbach) and three of his aristocratic pals (David Bertoldi, Madeleine Maggio, and Devante Owens) to devote three years to ascetic study and celibacy. That vow is sorely tried by the arrival of the Princess of France (Rory Hammond) and her own trio of attendants (Caroline Calkins, Emily Eldridge-Ingram, and Dara Silverman) with their stern chaperone (Caitlin Kraft).

The foolery is supplied by a swashbuckling “fantastical” Spaniard (Thomas Reynolds) and a country bumpkin (Luke Haskell), both of them lovesick over a (pregnant) wench (Maggio again), as well as a pedantic village schoolteacher, paralleling the nobles’ academic pretentions (Lori Evans), a feisty page (Bella Pelz), and a dimwitted forester (Fiona Herter, done up as a Boy Scout). The comedic climax comes with swordplay that explodes into a water-balloon fight.

There are no water balloons in Creditors, which ended its all-but-sold-out run last weekend, but it could easily share the other’s title. In August Strindberg’s “tragic comedy,” love’s labor is indeed lost, not in merriment but in a tangled triangle of obsession, jealousy, and deception. 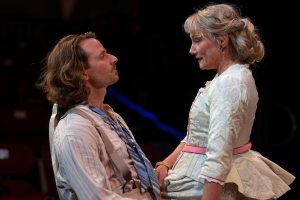 Strindberg’s 1889 play, I learned in a post-show talkback with the three performers, was closely autobiographical, written in a frenzy of doubt over his wife’s fidelity. In the first of three two-person scenes, we see the personal and professional confidence of a successful artist, Adolph, gradually undermined by a glib new acquaintance, Gustav. He convinces Adolph that his wife, Tekla, is still in love with her first husband, because “You can’t give the same gift twice.”

When Tekla arrives, Adolph’s fears are seemingly confirmed by his own insecurity, and it’s not until Gustav is alone with Tekla that we discover who he really is and what he really wants. A fourth presence in the room adds a Pygmalion-esque turn of the screw to the proceedings. Adolph is sculpting a nude statue of Tekla, an image that echoes each character’s role in molding one of the others.

Nicole Ricciardi’s pitch-perfect production of David Greig’s supple adaptation starred three S&Co veterans in a round-robin of exquisite performances that added up to the most memorable of the season. As Adolph, Ryan Winkles channeled the playwright’s tortured uncertainty, expressed in the crutches he may or may not really need. Jonathan Epstein was a mesmerizing, tantalizing Gustav, suave and sinister. And Kristin Wold’s Tekla, the focal point of the triangle, maintained a cool demeanor that keeps us guessing about her own allegiances.

Last season the company inaugurated a new outdoor venue, the Roman Garden, adjacent to their mainstage building, with a delightful production of The Tempest, staged by the theater’s new artistic director, Allyn Burrows. As You Like It opens there this week, joined in the repertoire by Heisenberg, which applies the Uncertainty Principle to an unlikely romance, and next week by Terrence McNally’s Mothers and Sons, in which Annette Miller portrays a grieving matron struggling to reconcile with the gay lover of her dead son. 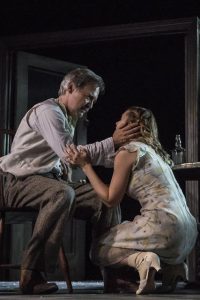 Elsewhere in the Berkshires, end-of-season productions offer the kind of variety we’ve come to expect from summer. Take the Berkshire Theatre Group, presenting a classic thriller and a farcical double bill on their two Stockbridge stages.

In 1935, Robert E. Sherwood’s The Petrified Forest gave Humphrey Bogart his star-making role, as Duke Mantee, a gangster on the run holding out in a desert café. Here the role is taken by Jeremy Davidson. The large cast also includes Berkshire favorites David Adkins and Rebecca Brooksher. It runs through Aug. 25 on the BTG mainstage. A double bill of Christopher Durang comedies opens this week in the intimate Unicorn Theatre – Sister Mary Ignatius Explains It All For You and The Actor’s Nightmare, both starring the wonderful Harriet Harris.

Earlier this season Harris stole the show in The Royal Family of Broadway, the musical that received its world premiere at Barrington Stage Company. The theater concludes its mainstage season with another musical, West Side Story, continuing through September 1st. And opening this week on the company’s second stage is Well Intentioned White People, whose title speaks for itself.