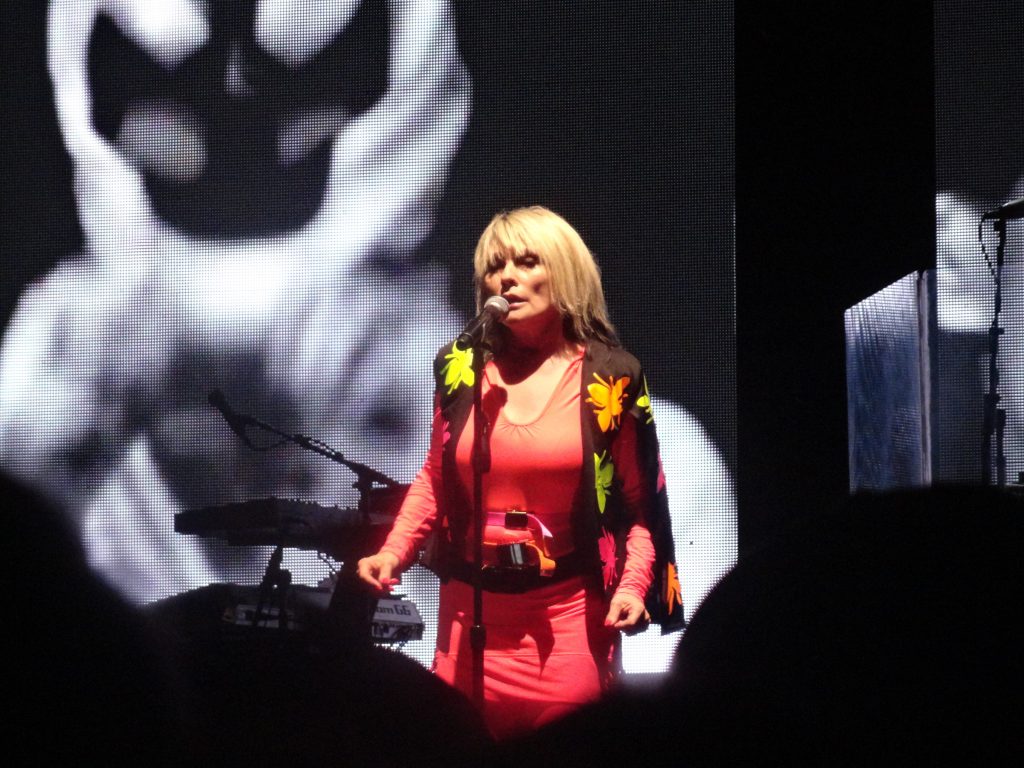 I’d just devoured a bowlful of multi-colored Chicklet gum, then jumped up and down on the couch with my blonde pigtails smacking up against my cheeks. Blondie’s “Rapture” blared from the 80’s radio/boombox in the kitchen while my mother was either cooking or cleaning. I sang along to the lyrics, through my gum-infused sugar high. That is one of the first happy memories I can remember.

Blondie has always been one of those bands that I can never get sick of. They were one of the first punks bands to indulge in more than one specific genre. They added some pop, reggae, funk and disco to the mix and even rap. Speaking of “Rapture,” that just happened to be the first No. 1 song in the U.S. to feature rap vocals, and lead singer Debbie Harry wrote that iconic rap in the studio, totally on the fly. The lyrics are a sci-fi story in the making. 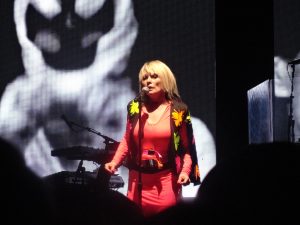 They were the heartbeat of the mid-late 70’s NYC new wave/punk/art scene in the midst of it all. They were regulars at CBGB’s, along with the Ramones, Patti Smith, Television and The Talking Heads. Debbie was one of Andy Warhol’s muses, then later moved on to be one of John Waters’ muses.

The band disbanded in 1982 after six studio albums. Before Debbie went on to do her solo music gig, she took a break to take care of guitarist and longtime partner Chris Stein who developed a rare skin disease. Blondie re-emerged onto the music scene in 1997. Newer members had joined, but there were still three of the originals from the beginning — Debbie, Chris and drummer Clem Burke. All three are still playing and recording together 40 years after they started.

I saw Blondie for the first time last summer in Boston. Our seats were further back, but the screens revealed those glorious living legends on stage that night.  When I heard they were coming to MASS MoCA in North Adams, I thought I might have a chance to get a closer look.

My friend and I had never been to MASS MoCA before and when we arrived we were in awe. The museums were closing up just as we arrived, so we decided we needed to plan a day trip to indulge in the eclectic collection of art.

The weather that evening was terrible; we drove through a hellish monsoon only to find that the storms had put a halt to the festivities. We had to wait outside of the outdoor venue until it was cleared and safe to enter. The line grew pretty quickly, then once we started moving, I realized there was way more to that line!

Northampton-based indie pop rockers And The Kids opened the night. The Signature Sounds recording artists sound-tracked our wait in line. Unfortunately, we were only able to see them play the last song and a half by the time we entered the venue. But that was enough to make me want to see them again in order to catch their set in its entirety.

After stuffing pizza and extremely garlicky garlic knots into our faces, we snagged a Blonde Cougar from the beer tent and sloshed up the muddy banks closer to the stage. I’m so lucky we opted to wear our matchy-matchy Doc Marten boots with our matching Wednesday Addams dresses (“The Goth Girls Go To Blondie!”)

The TVs behind the stage were full of static and the sound of buzzing bees was all we could hear. Not knowing that Blondie’s latest album is called Pollinator, you might have thought we were in the midst of some kind of infestation. Then the stage lights came on and there they all were.  They opened with the forever popular “One Way Or Another.”

Right before they went on, the venue crew were mopping water from the stage. “I haven’t seen so much mopping since high school,” Debbie said with a smirk through her sunglasses. Her nonchalant comedic banter between songs added to the feeling that we were witnessing something so special that it’s bucket-list worthy.

They played some new songs off Pollinator and of course they played the classics. “The Groove is in the House” turned up in “The Tide is High,” and a few other live version twists made something I’d listened to a million times sound fresh and new.

The band’s performance of “Rapture” ended up turning into an almost-10-minute song that, for the most part, resembled the original.  But the live version was a tad slower and more jammy, and the guitar solos were longer and more drawn-out.  And that rap, oh my! I got chills and I got teary eyed once Debbie began.  It was perfect!  I wondered how many times she’s rapped that rap. Finishing up grocery shopping, bobbing her head while pushing the carriage to the car: “And you don’t stop, sure shot / Go out to the parking lot.”

“STOP FUCKING THE PLANET” was the message of the evening which was on the back of a cape Debbie wore in the beginning of the show. Once she took it off, she held it up for the audience to read just in case they hadn’t caught a glimpse of it while she was dancing around the stage.

“Fight for Your Right (To Party)”by the Beastie Boys and “I Feel Love” by Donna Summer snuck into the mix at the end of a couple more songs. It had me wishing Blondie would come out with a covers album of hip hop and disco tunes.

“Gotta go out with my theme song,” Debbie said before they ended the set with “Heart of Glass” from Parallel Lines. By that time, we had migrated back towards the tents to get Blondie koozies at the merch table before the encore set.

As we spun around, they were back on stage performing the theme song to the 1963 James Bond flick “From Russia With Love.” It was haunting and beautiful, and it felt like we were in the end credits of the night. But then, one more song. “Dreaming” from 1979’s Eat to the Beat ended the evening.

The five members grouped together, and bowed before saying goodnight.