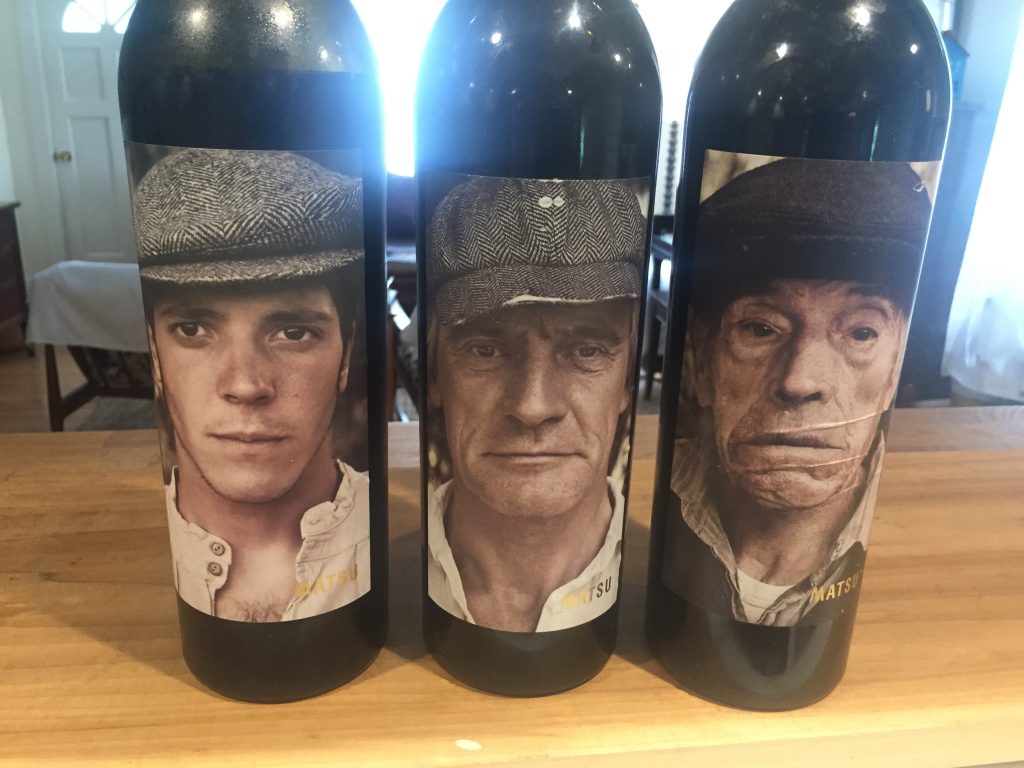 I ain’t gonna lie. I got into this wine writing racket for three reasons: 1) as an attempt to write off all of my alcoholic beverage purchases, which I will list as “considerable,” 2) to see my name in print, and 3) in the hopes that I would receive free wine on a regular basis. I know basically every wine purveyor in the 413 area code. Many of them have been on my radio show. I assumed if I put out the word that I would like to do a wine column reviewing, say, rosé wines, that they would all shower me in free vino. Turns out, that is not the case. My wine purchases this year are already nearly triple the amount of money I get paid to write this column. Don’t pity me. It’s a labor of love.

But imagine my delight when, out of nowhere, a wine company sent me this email:

“I am pleased to offer you samples from Rioja and Toro: Matsu, which in Japanese means “wait,” pays homage to the those working in the vineyards for generations.”

Well, now how could I say no? I forwarded this email to a trusted wine buyer in the area. They respond:

“I may have been known, on occasion, to poke fun at the portfolio of Monsieur Touton. I don’t do business with them, but don’t let that stop you from receiving unsolicited, free samples … they may even be good. Or, you may end up writing your first truly scathing review.”

About a week later, the Toro wines showed up in a package at my house. Goal number 3:  accomplished. I have no personal relationship with the person who sent these wines. They could be a Russian bot for all I know. There’s a part of me that is longing to taste these wines and publicly trash them. But one summer evening, after sharing a bottle of rose, and also a bottle of New York State Merlot/Cab Franc, while playing the board game Anomia with my restaurateur friend, Jim Zaccara, and our families; we crack open the $13.99 bottle that was sent to me. Seeing as we are all already two bottles in, I think, “How bad could this wine be right now?” And given the faint praise this importer of wines has been damned with, my expectations are abysmally low.

Imagine my surprise when we take our first whiff, and our first sip, and both Jim and I are delighted. I extemporaneously blurt “This wine is like a sharp cheddar CHEESE! It feels like there’s some CRYSTALS or something in my mouth! But it’s sweet, not stinging like a cheddar!” I had also been shouting while playing Anomia. It’s a really fun game. I can get very competitive. And I get loud when I drink. Jim responds to my outburst: “You should write your column about the crystals!” And here I have.

But I decided to matsu or “wait,” as the bottles have instructed me, before I tried the other three free bottles that were shipped to me. These three are all made up of 100% of the grape Tinta de Toro. They have photographs of farmers on the labels, which the letter from Monsieur Touton tells me are “real-life photos.” I have no doubt they are actually photos. But I surmise that they are likely not farmers, but models, on the labels.

The first, El Pícaro 2016, has a picture of a young man on the label who looks like the lovechild of Gael García Bernal and the young Michael Corleone. They put the young handsome man on the bottle where the vineyard selection is from 50 to 70 year old vineyards. This farmer/model can’t be a day over 25. But this wine is aged for the shortest period of time of the three — a minimum of three months. “Picaro” means “a rogue.” This wine is also a rouge.

Then I moved onto the El Recio 2015. “El Recio” means “the strong one.” The farmer/model on this label looks like every male baby boomer on my Italian side who doesn’t have a mustache, but slightly more handsome. The grapes from these vines are 90 to 100 years old and the wine is aged for 14 months, hence the older guy on the label.

And the third bottle has a wicked old guy on the label who looks like a generic geriatric character actor on one of those CSI shows, or pretty much every Scooby-Doo villain. The wine is called “El Viejo” which literally means “The Old Guy.” And, as you might have guessed these vines are older — 100 years plus. And it’s aged longer, 16 months.

These wines serve as an excellent lesson for me on several fronts.

I should’ve opened them all up on the same day and tasted them against each other immediately rather than “matsuing” so long between them.

From the notes I made while drinking each wine, it appears I was underwhelmed compared to that first wine I tried with Jim and Cathy from Hope & Olive.

Sometimes going up a dozen dollars in price with the same wine brand is noticeably worth it and sometimes it isn’t.

For me, there wasn’t a huge difference between the three Matsu wines. They were all very good. But, of all the free wine I received, the less expensive Rioja which I tried first was the most memorable. That may have more to do with the company in which it was drunk. And that is another important lesson. Wine is as much about setting as it is about cepage. And as for the mysterious Monsieur Touton, whom I’m told is an actual person and not a clever marketing brand name, feel free to keep sending me free wine. I’ll make no claim that I will review it, or review it kindly, but I promise you it will be consumed.